Today we were heading to Kampong Plouk, the largest floating village in Siem Reap province.

We had hired a guide yesterday named Bun to walk and talk us around the temples which gave us some in-depth information.

Bun was a young local guy from the countryside.

As the day went on we got talking to him about life in Cambodia, he was a genuine lovely guy.

He told us about himself, his family, the education system and loads of other local knowledge stuff.

We straight away clicked and got on really well together, so well infact that he suggested he take us here today to Kampong Plouk, somewhere very little tourists explore. It was a no brainer!

Bun spoke about his family of 7, who lived with their father. His mother passed away when he was just 4 years old. He told us about the education system and how primary school was paid for by the government but after this family’s had to pay for their own education.

Schools run Mondays to Saturdays for 4 hours per day which is not alot of education so for additional hours it was up to the family’s to pay for any ‘extra education’.

For those families that don’t have alot of money and those living more so in the countryside it made things very difficult.

Some children had to stay at home as they didn’t have this money or had to help on the land to get more money for basics such as food.

Bun told us about his older sister being illiterate due to not going to school but how he himself had managed to go and he had even went on to complete university, the first in his family.

Although it had taken him 10 years to get his degree in English Literature, he swapped courses several times and he told us he was a very bad student – he had done it, and was now helping to support his siblings who were going to school, he said “education meant a better life”.

Firstly he takes us to a local market. This market was not for the tourist.

It was for the local people who come here up to twice a day to buy their food (a lot do not have refrigerators in their houses), second hand clothes, and we saw a grandmother buying school uniforms for her grandchildren. It was chaotic but what an eye opener!

Bun was great with the locals walking us through the market, explaining to us what was happening, letting us taste the many different foods on offer, basically just letting us experience the real life of the locals.

It was pretty amazing, we have been truly blessed on this trip. 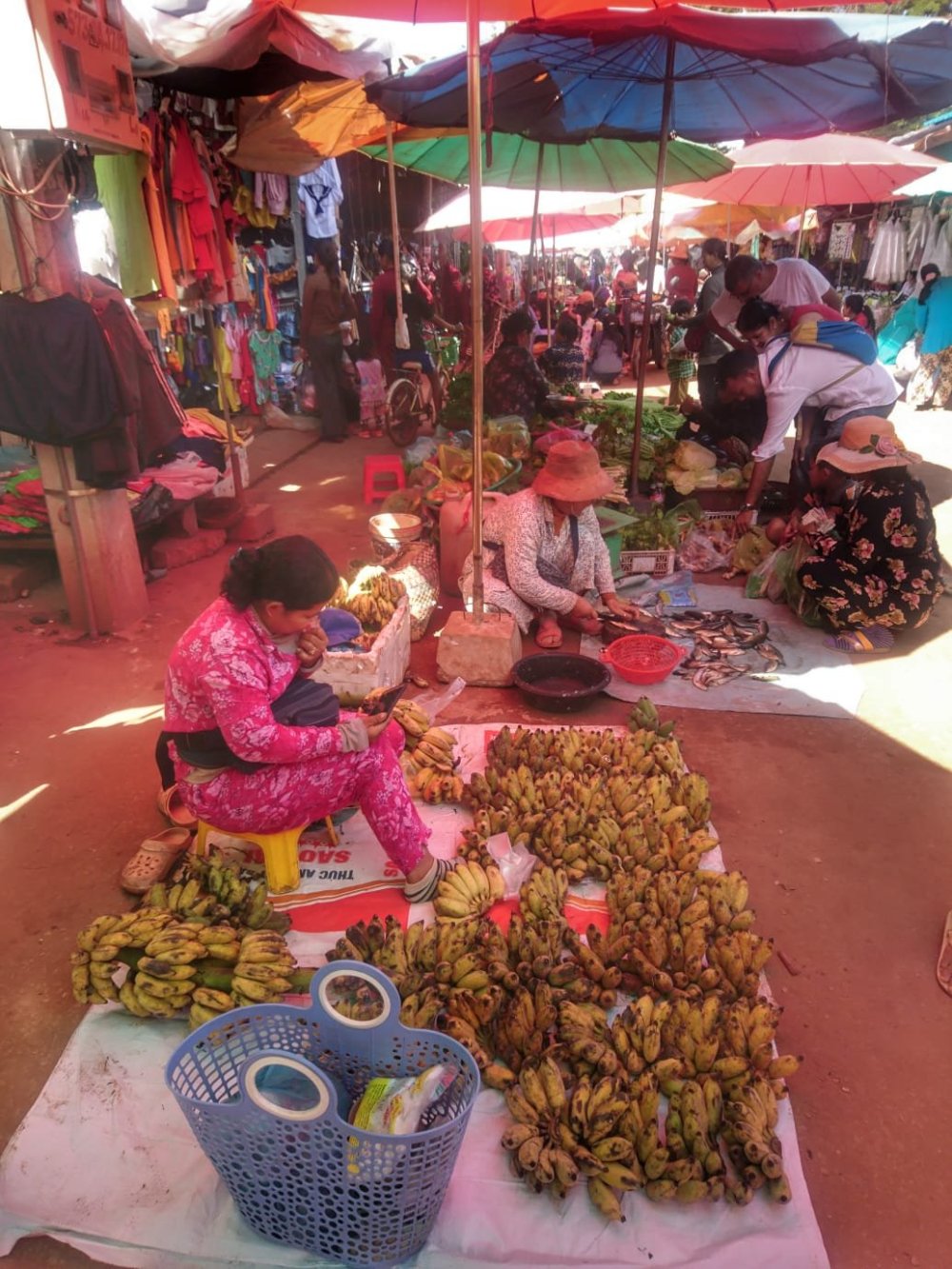 From here we were heading to get on a boat which would take us to Kampong Phluk.

End of the land

Bun in the white shirt 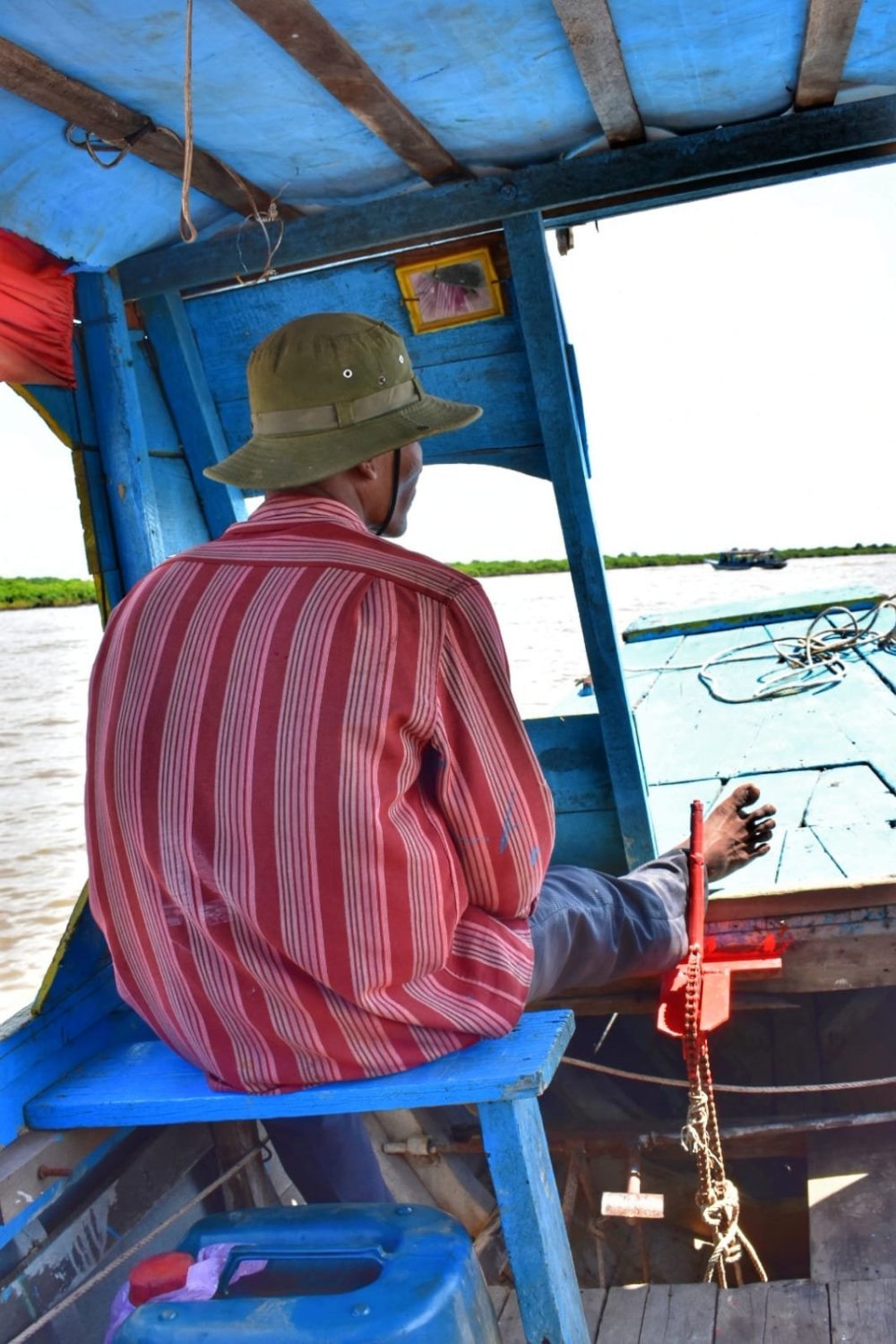 Kampong Phluk, is actually 3 villages, it has the largest population of villages on Tonlé Sap Lake and because of it’s remoteness means that they get very few tourists here.

These floating villages are home to over 10,000 people, many of whom have been living here for generations.

As we get nearer the village we can see mainly stilted houses that line the main entrance to the Tonlé Sap Lake from this area.

As we get deeper in we can see an outer floating village and an inner stilted village.

The community sustain themselves mainly by catching fish and shrimp, but also harvest some land crops during dry season. 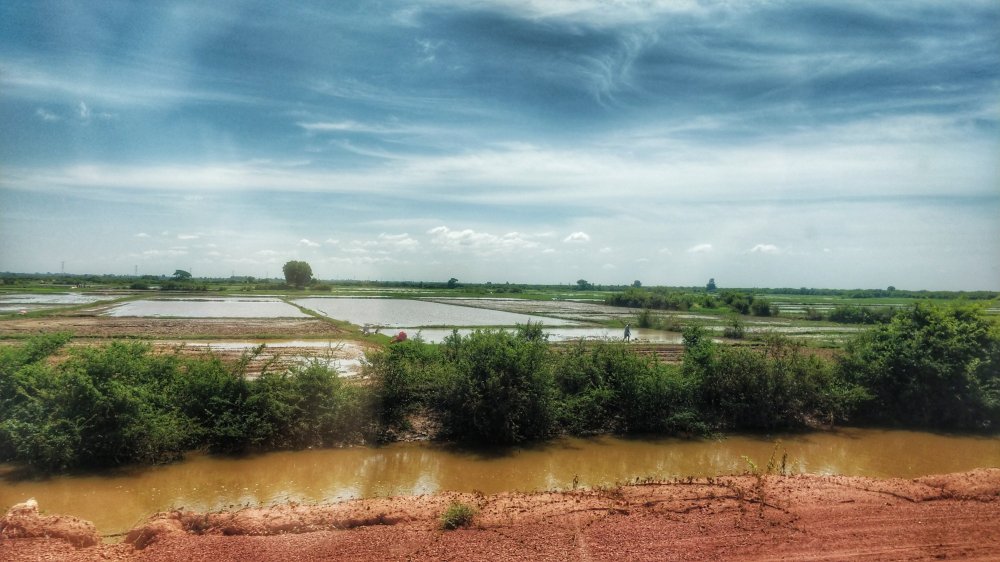 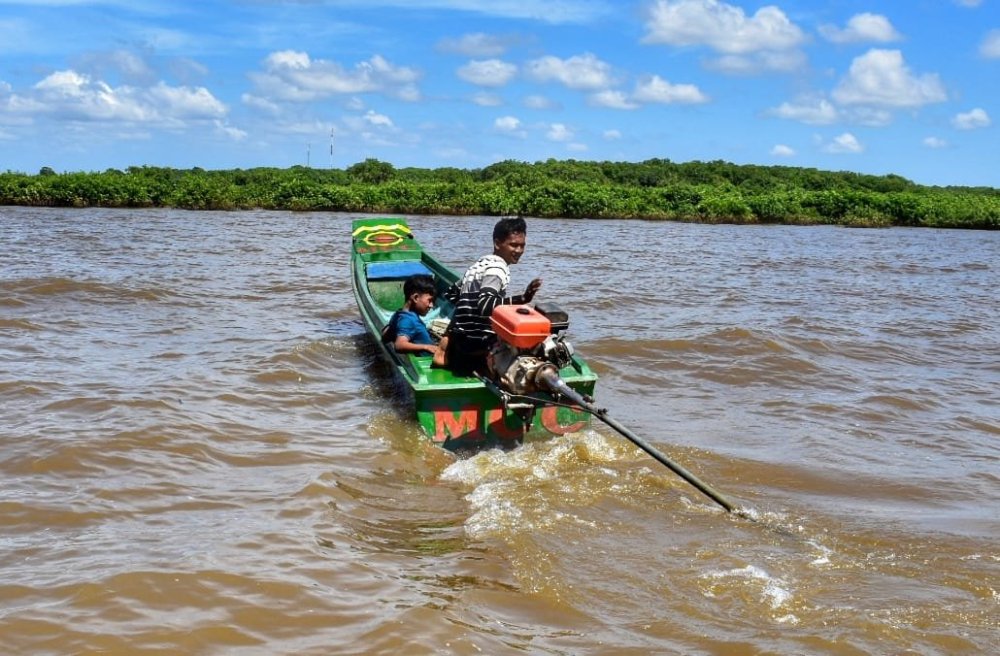 Kampong Phluk is a working village, there’s no activities rigged up here for ‘tourists’ to do but we wanted to see the locals lifestyles.

As we took the boat we were literally going right past the houses of the locals.

We saw many who were focused on their own industry, quite separate from the tourism industry.

It was interesting to view another way of life very different to our own.

Bun took us on board a family run floating restaurant, he knew the family as he had went to school with one of the boys. We ordered some food and drinks to help support some local industry. 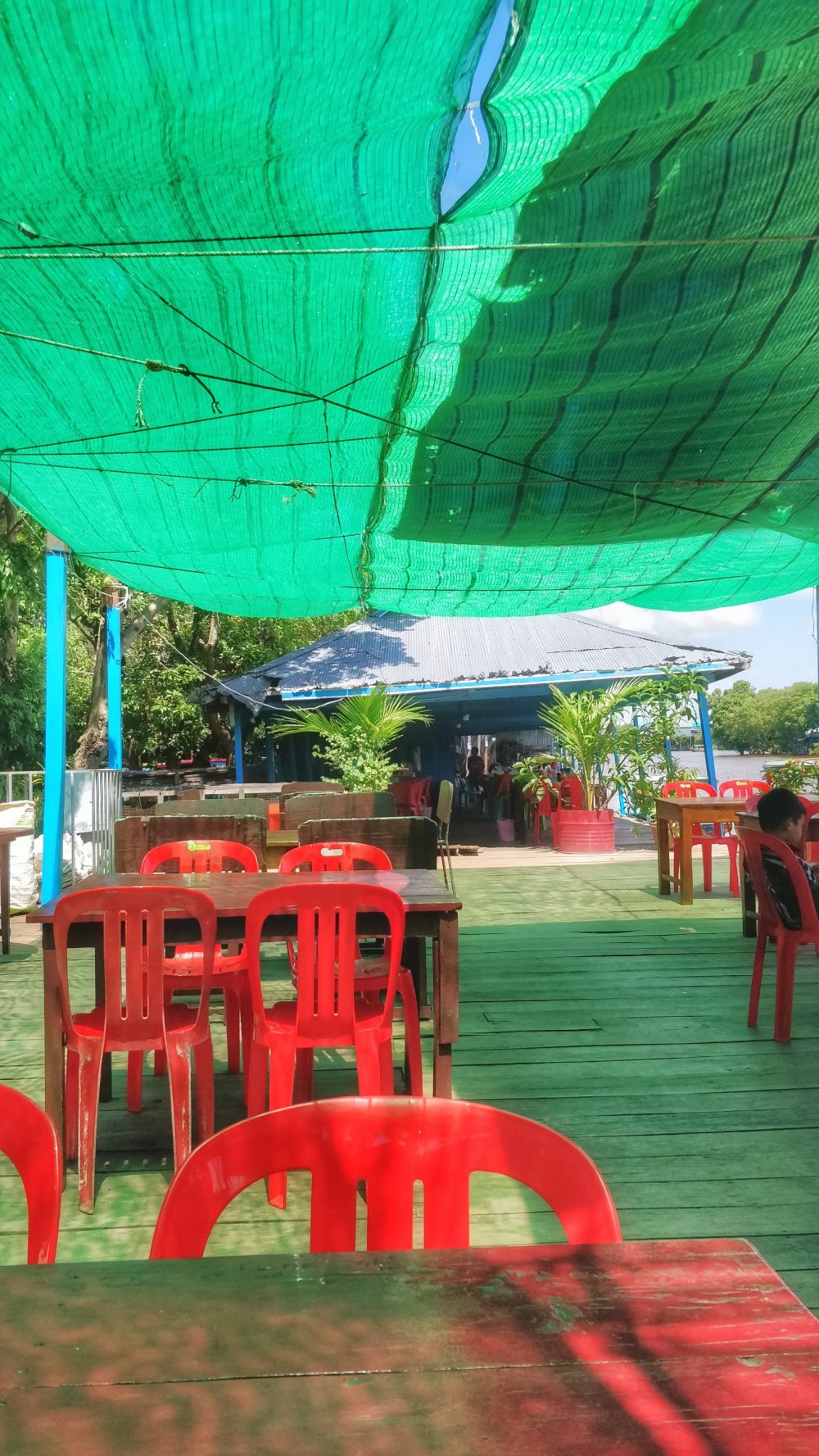 Our boat took us around mangroves, and flooded forests, it was such an authentic experience. 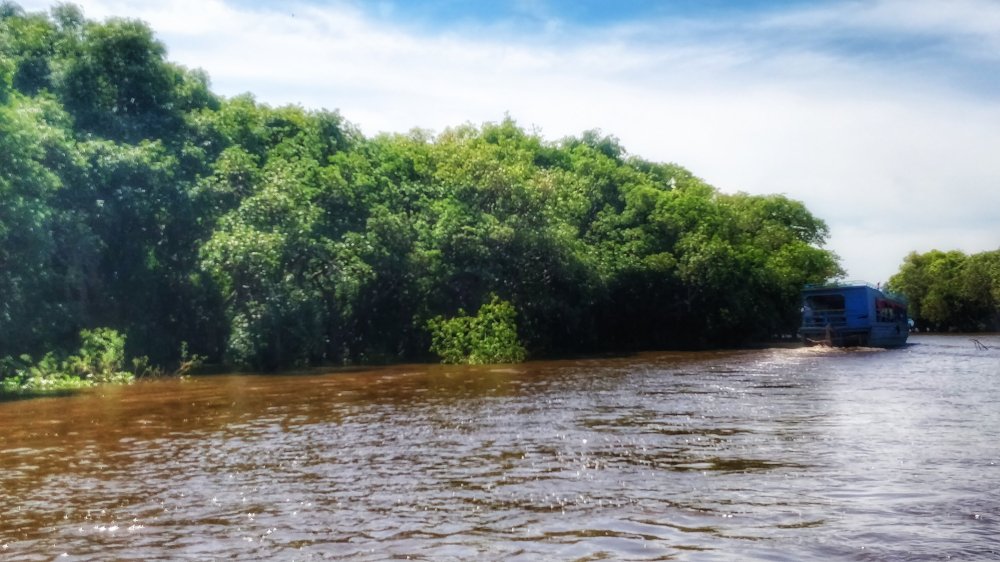 We were also going to take a boat to Tonlé Sap Lake, a seasonally inundated freshwater lake which has an attached river that connects to the Mekong River.

Tonlé Sap Lake is the largest freshwater lake in Southeast Asia, it’s approximately 250km in length and 100km across at its widest point.

When you witness this it seems like an inland ocean because it’s impossible to see the opposite shore from our boat.

It has one of the worlds most vibrant ecosystems.

They say the best time to visit here is during the rainy season (June to October). Water in the Mekong causes the Tonlé Sap River to reverse it’s flow which,combined with the extra water from upstream means the lake grows to 5 times its size, it’s quite spectacular.

During the dry season, the Tonlé Sap Lake drains into the Tonlé Sap River, which flows ito the Mekong River. The lake becomes very shallow and large boats sit on the bottom. During this time, floating villages move further out onto the middle of the lake. The surrounding forests dry up.

Our boat conks out right in the middle of the lake! Our ‘skipper’ produces a mobile phone makes a swift call and within 10 minutes a small boat appears with 3 young boys and a plastic barrel with petrol.

As we were waiting for our petrol delivery there must have been at least 3 small boats with women paddling out in the lake selling confectionery to the locals but basically us as we were about the only ones there.

They paddled up to the boat launching themselves beside us by grabbing our boat to try make their sale… It’s something else!

We head back to the village from the lake and Bun asks us if we would like to walk through the village? This mesmerised me as all I could see was houses on stilts surrounded by water?

He took us to a spot were we had to walk a very dodgy plank of bendy unsafe wood and then we found the safety of ‘mainland’. 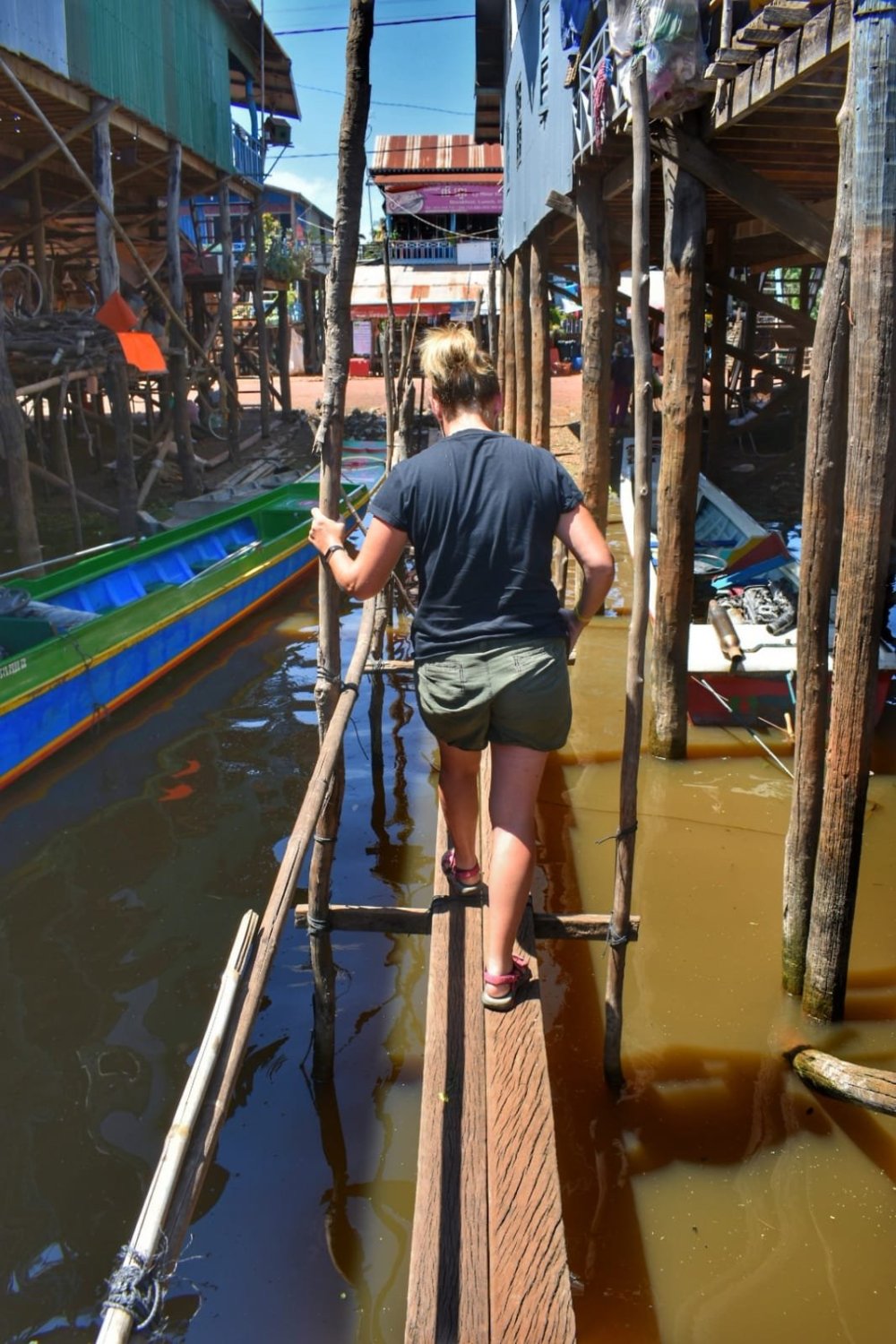 I say mainland but this was basically a single strip of land that ran for say approximately 300 metres disappearing into water either end and either side. 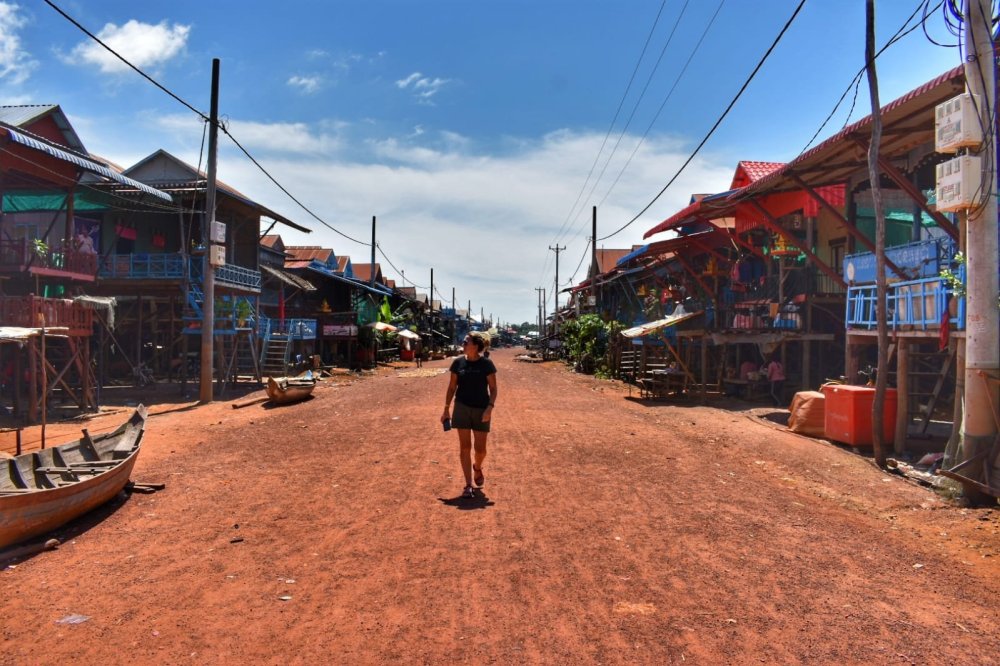 Due to the season almost coming into dry season this piece of land had protruded from the water which was great as we were able to wander through seeing the local life.

This piece of land would also get longer as the dry season went on.

The children were running around having fun as it was Sunday (no school on Sundays), and people were going about their daily business – we were the only ‘outsiders’ within. 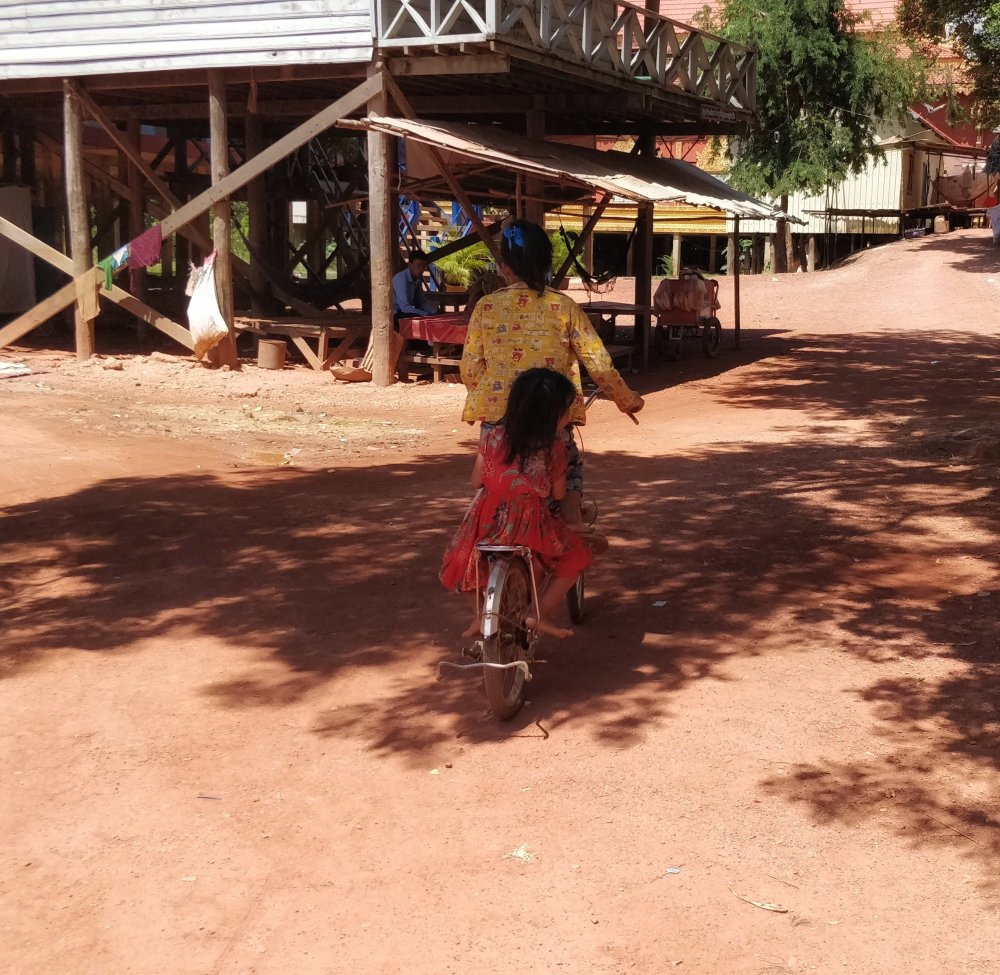 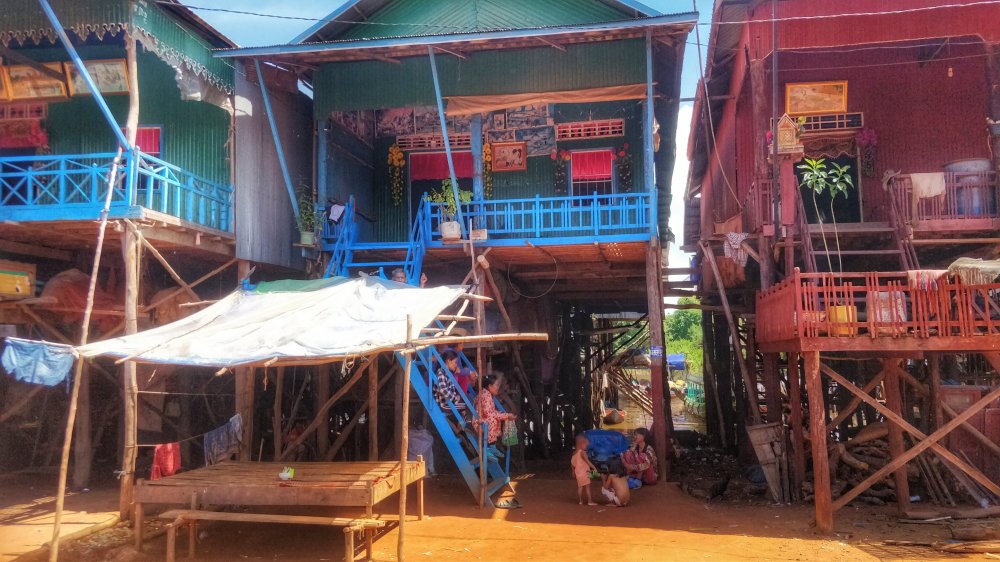 Childen being children were curious to see who we were and we were surrounded by them.

We stayed with them for a bit trying to communicate with them as best as we could and we played a few silly games together. 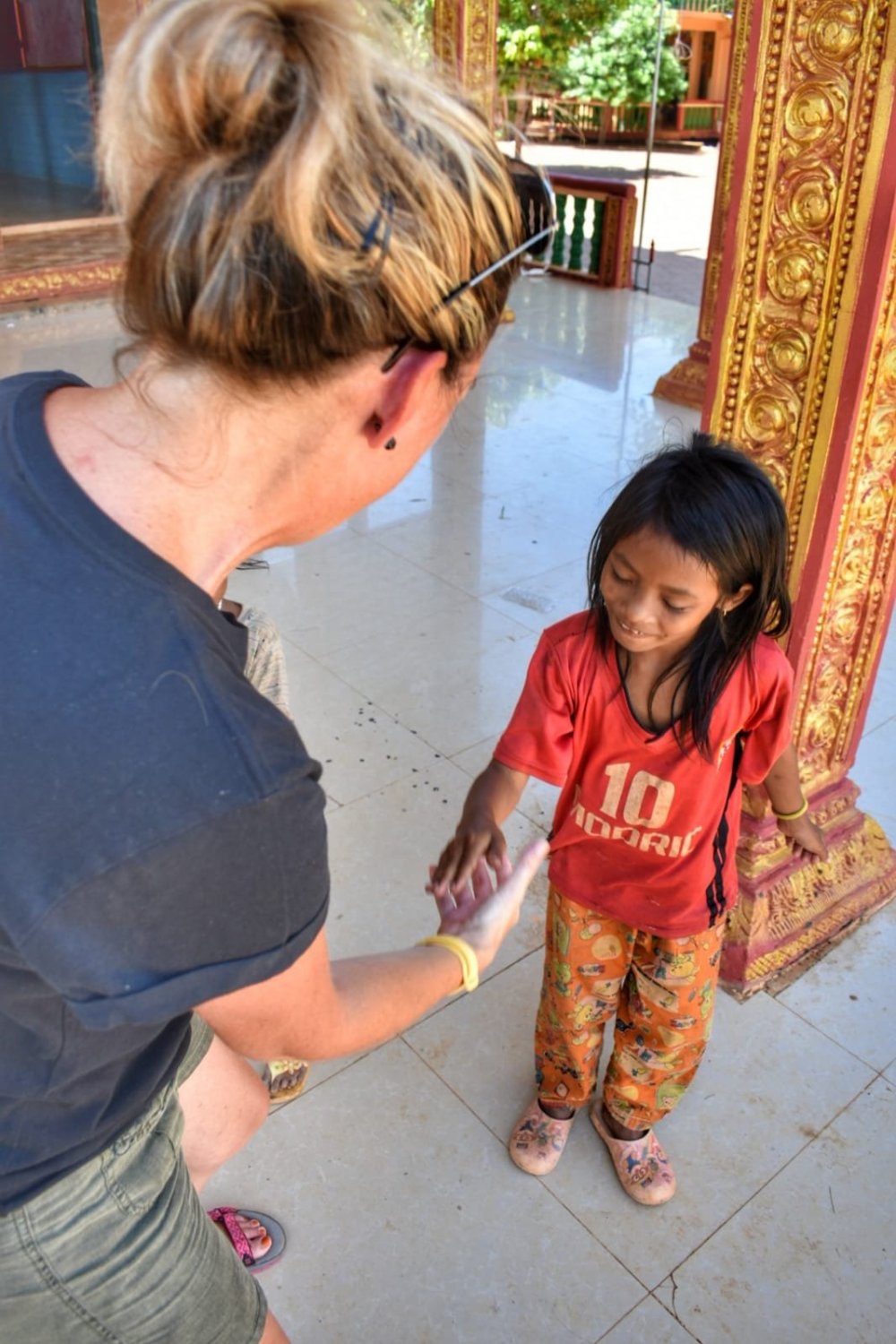 We also saw a group of them huddled together under a building for shade playing some kind of game.

We saw money was involved as each of them were holding numerous notes. We were intrigued.

Bun spoke to the kids and then explained to us what they were doing – they were basically gambling and some were tiny kids!

The object of the game had something to do with choosing an animal from a sheet that was lying on the ground, the money would be laid on the animal you picked and if the dice was rolled showing the animal you had picked then the money was all yours! 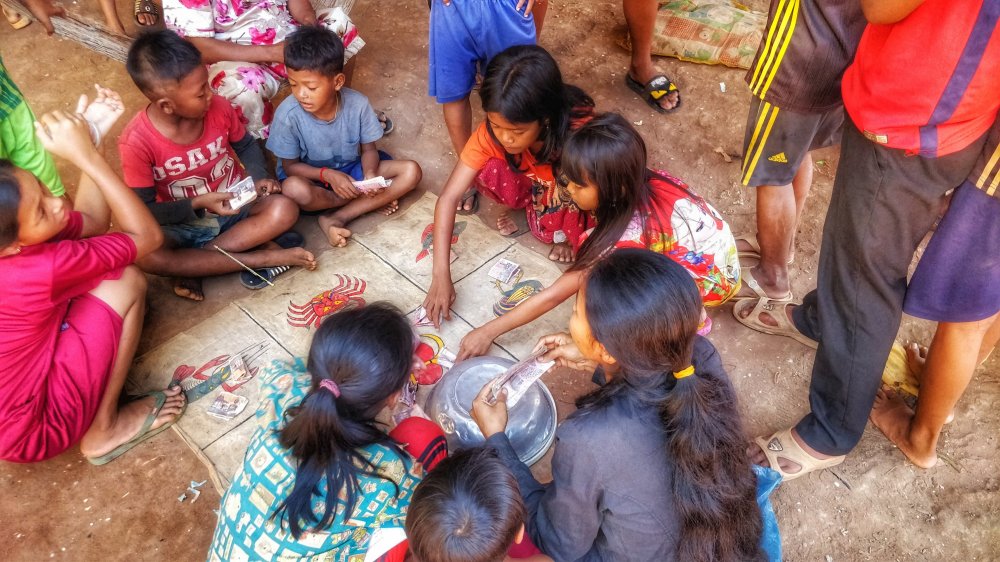 I asked where they got the money from, Bun said their parents but that their parents wouldn’t know that they were gambling with it, gambling is illegal for everyone in the country! To prove this he shouted “hey quick your parent are coming” pretending to the children and you should have saw their faces!!!!

Today had been one amazing experience and we had been so lucky. 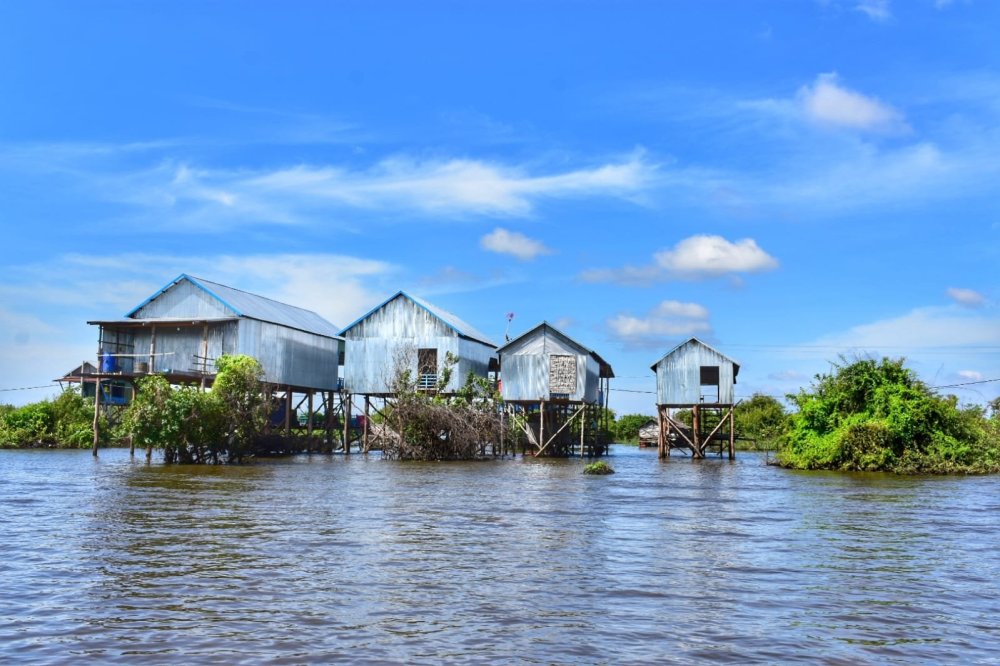 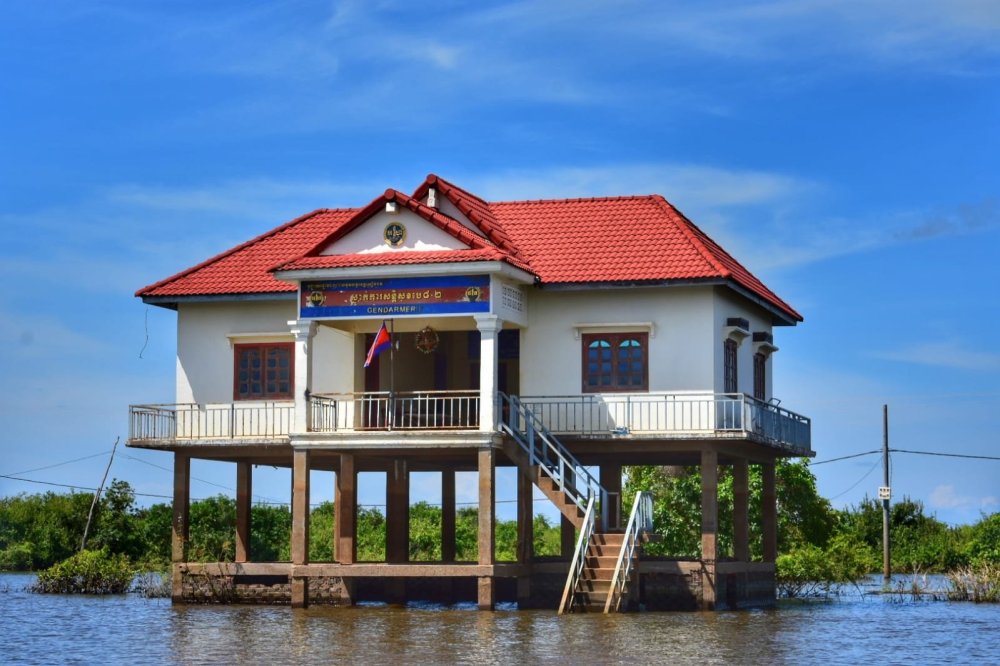 In the evening we headed up town to enjoy the laid back vibe and pick up a few souvenirs. Silver seems to be the thing here!