So last night we went to bed sharp anticipating a 3.30am start to the day to climb Kala Patthar…I saw every hour…not sure if this was nerves or excitement.

3.30 am came and we were up and ready with only another handful of people…some might say the ‘sensibles’ stayed in bed!

It was dark and freezing outside so we headed off wrapped up and with head torches on. Now you might be thinking why on earth would you want to…but this climb with clear skies gives you the closet view you are ever going to get to Everest…unless you actually climb the mountain itself…so why wouldn’t we!!

As soon as you touch the foot of Kala Patthar it’s a steep climb…we had at least another 2 hours of this continuous up in order to reach the top before sunrise…it was a race against the sun.

We pulled ourselves slowly and sluggishly through thin icy air braving the bitterly cold conditions. Fingers and toes were frozen, an icy layer appeared on hoods and rucksacks and my water supply froze over!

Kala Patthar is 5,645m/18,529ft and gives you panoramic views of Everest and all the other Himalayan giants such as Nuptse, Lhotse, Pumori – 8 out of the world’s 10 tallest peaks!

‘The best view comes after the hardest climb’ and we so deserved this view. We pushed ourselves to the top of the rocky projection at the summit which was covered by cairns and prayer flags. This famous view point of Everest was dramatic, stunning and one of the most spectacular mountain views you will ever see…and we were on it, taking it all in. 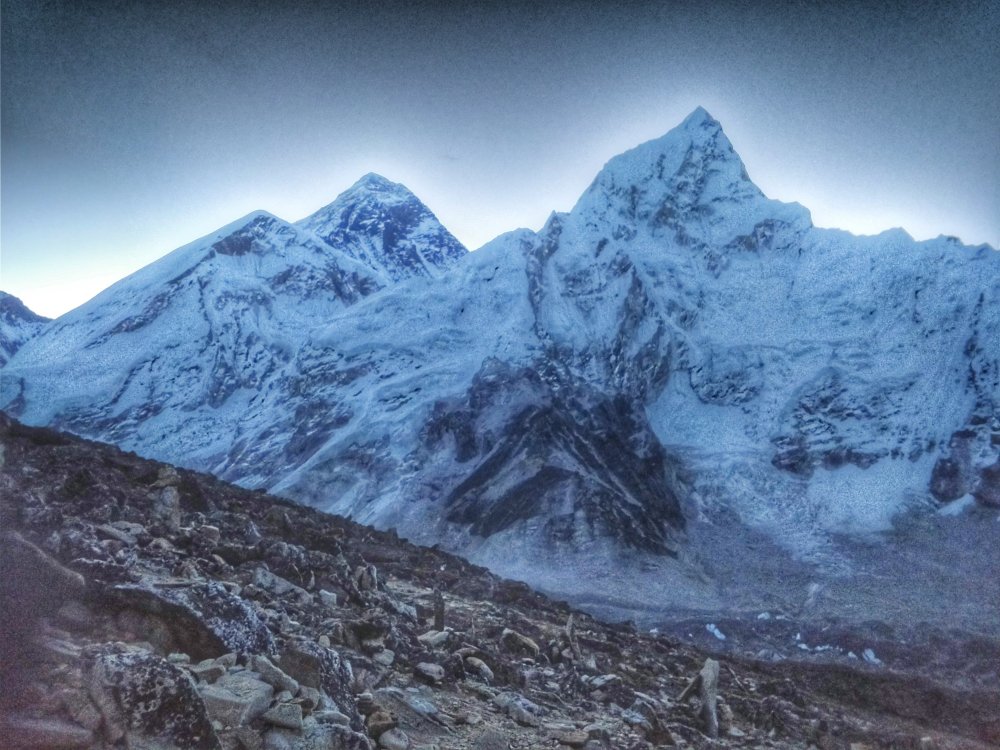 The climb had been difficult and made harder by freezing conditions but we were rewarded by a classic view of Everest and the Khumba Icefall, we could also see the full Everest Base Camp trek from the Everest memorial all the way to Everest Base Camp…the view leaves you inspired. 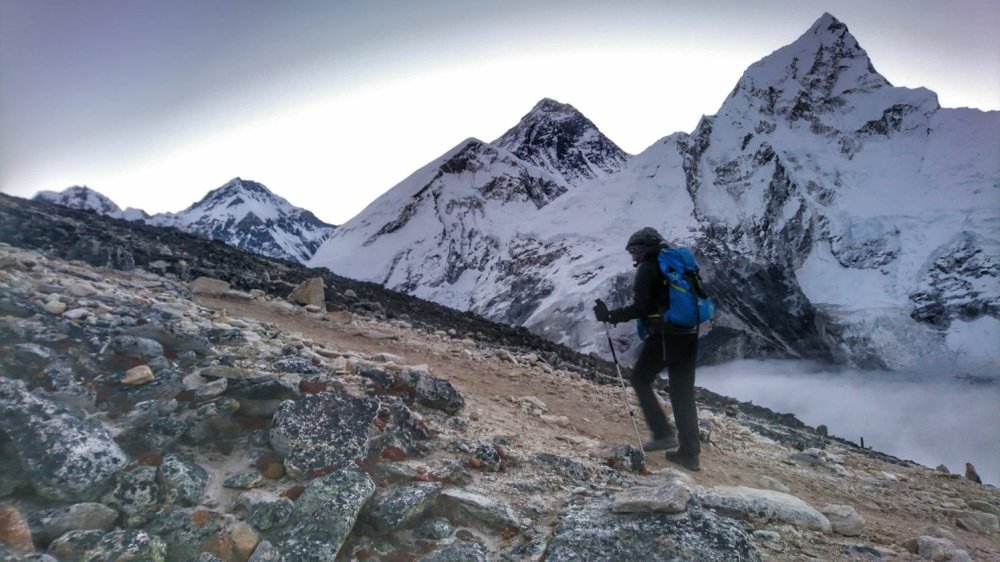 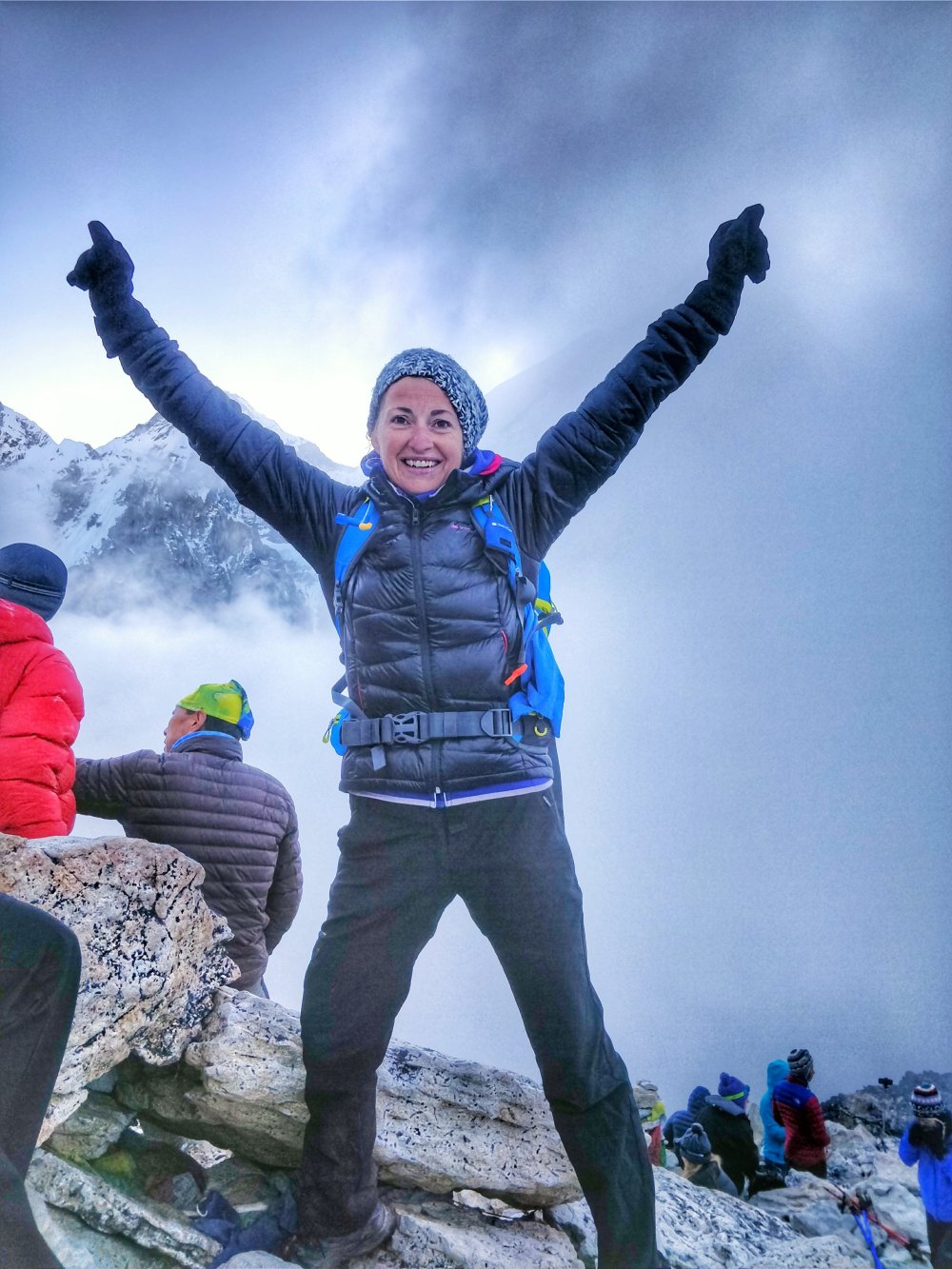 The top of the world was standing right before us…I felt I could touch her she was so close. 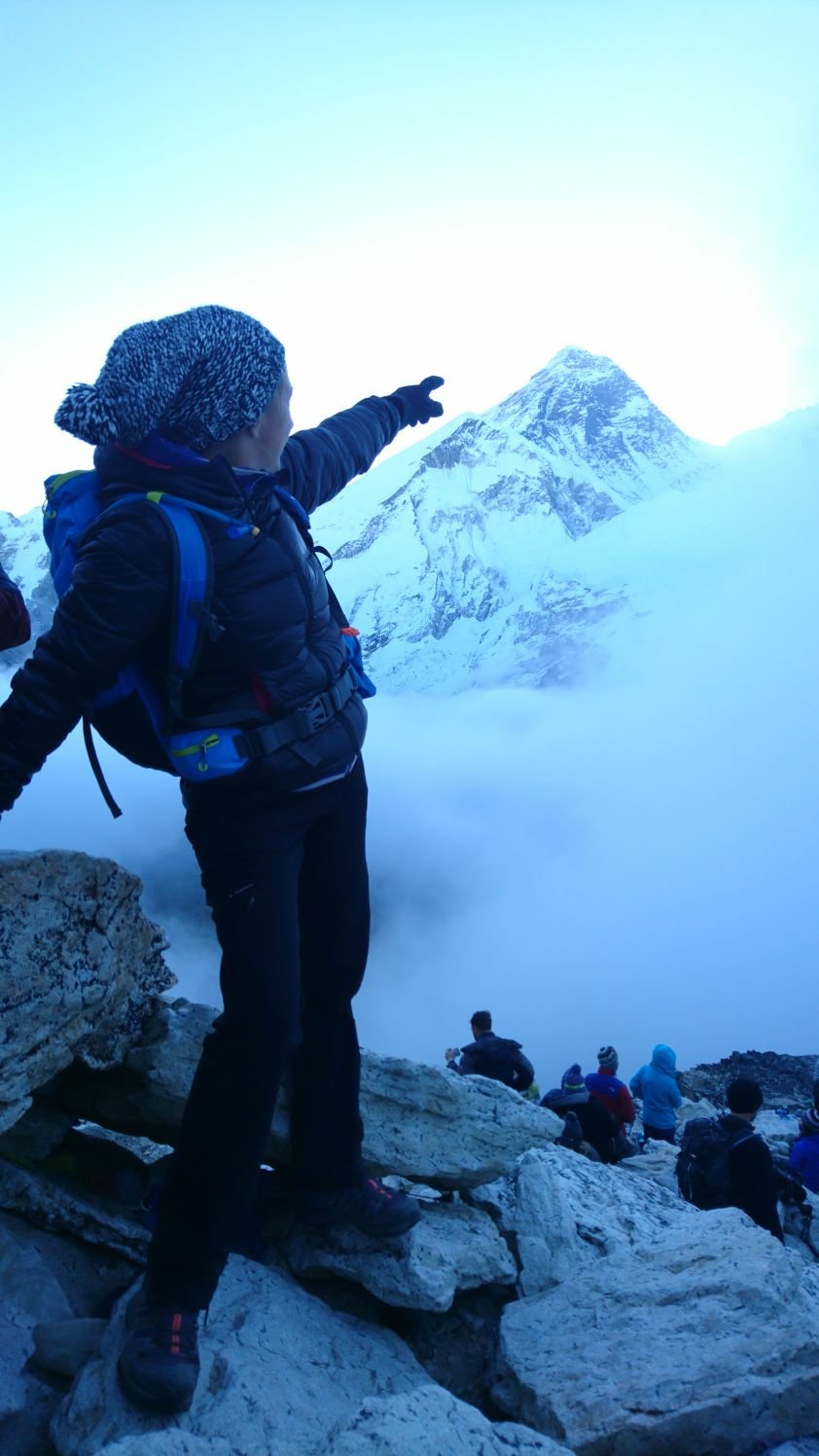 Once again it was proved that with every excruciating step a magnificent view awaits you.

We sat just looking at her beauty and our surroundings, took some photos then started on the decent back down as very quickly cloud began to rush up the valley.

On the way down a massive surprise happened…..a proposal took place within our party…and no way was it us but you knew that right!!! One of the guys with us proposed to his girlfriend right there on the mountain…what a memory!

On getting back to the tea house we were frozen, a warm drink and breakfast soon sorted us out. Those that didn’t go listened to our stories and saw our pictures.

We then learned that a couple from our group are today being helicoptered off the mountain. The female has altitude sickness and needs to get down quick she is not in a good way, we are all so sad. The helicopter landed at Gorakshep and off they went. I really hope we see them again in Kathmandu before we leave.

Then it was time for us to leave Gorakshep we had reached our final destination upwards and so we started our descent back down (with a lot of up – how does that actually happen) to Pheriche, which could take 6 hours, this was a pretty long day all things considering.

We once again walked through glorious scenery with natural beauty, took in the fascinating culture as well as warm Nepalese hospitality – this is what makes Everest Base Camp Trek one of the world’s most unforgettable.

Tonight at dinner we have learned that it looks like another female is being helicoptered off the mountain tomorrow with her friend, she has developed a lung infection and has been struggling now for days.

Quite a few of us have developed the ‘Khumba cough’ but no surprises there with the cold, damp conditions.

Later on in the evening I also noticed I had developed frost nip on my right hand. The photo below is it healing…I didn’t want to gross anybody out by putting up how it initially looked – jeeso it’s tough at the top!