‘You don’t have to see the whole staircase, just take the first step’,

Today we were attempting an ascent of Elbrus.

My stomach had been sick again so eating breakfast which consisted of an omlette and porridge was difficult but I knew I had to force feed myself as I would need this food for energy.

We had lay in bed in full hiking gear minus the boots, waterproofs, gloves etc so we would be prepared to head straight away.

Then it was time to leave in darkness with head torches on and battle with this beast of a mountain and it was going to be one hell of a battle! 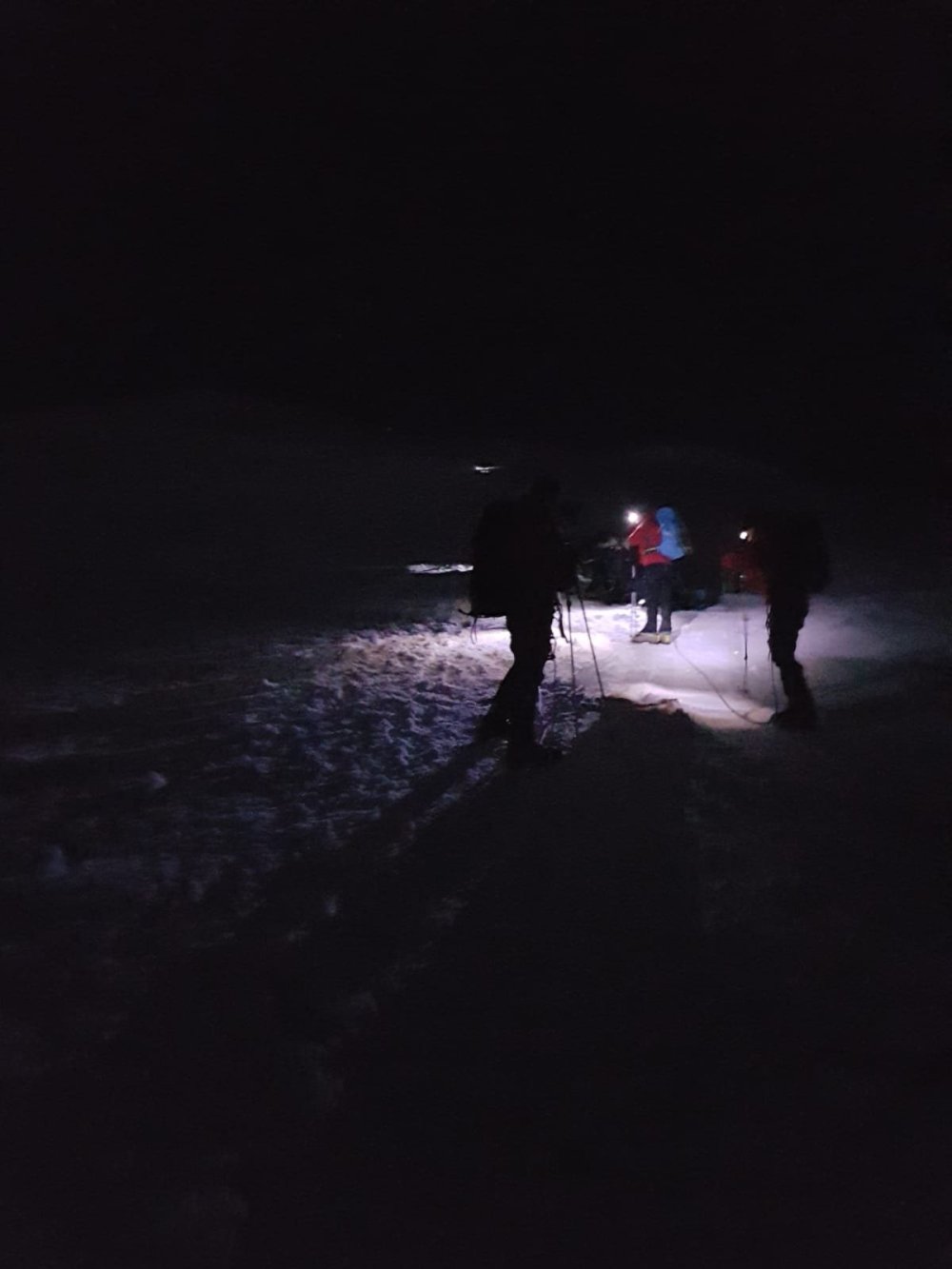 Today, I chose to face my fears and continue to ascend.

We don’t grow when things are easy, we grow when we face challenges.

We have been told that the climb today with descent can take anything from 10-17 hrs. It was going to be tough physically and mentally.

We were climbing 1900 metres today to reach the summit…even on Mount Everest the greatest distance between camps is 900 metres so this was a massive undertake for us.

Considering also that we had no Sherpas, no porters, and had carried full gear ourselves to get to this point and we had been up and down that mountain numerous times this was a massive undertake.

‘Being brave isn’t the absence of fear. Being brave is having that fear but finding a way through it’, Bear Grylls

We follow the line of Lenz Rocks, this is a straight up and one we have done before.

I preferred doing it in the dark as I couldn’t see how far we had gone. The ascent slope at this stage is already difficult and crosses the upper portion of the Mikelchiran Glacier and I knew from the previous times that it went on and on.

Ignorance at this stage was bliss, I just knew I needed to keep moving forward. We were all roped together so my focus was on footsteps and keeping my rope tight…and breathing!

We had walked over two hours and gaining in altitude it began to get really cold. I prayed for the sun to come up. My hands began to freeze over and my fingers were frozen. Trying to use my hands to get my massive -30 degree gloves out my rucksack was difficult as I couldn’t feel my fingers.

Once up at Lenz Rock where we had been before I got pretty sick, upset stomach and vomiting. Another guy got an upset stomach also. We had to quickly unclip and do our business wherever we could…it was desperate times. I swallowed some immodium hoping it would help. 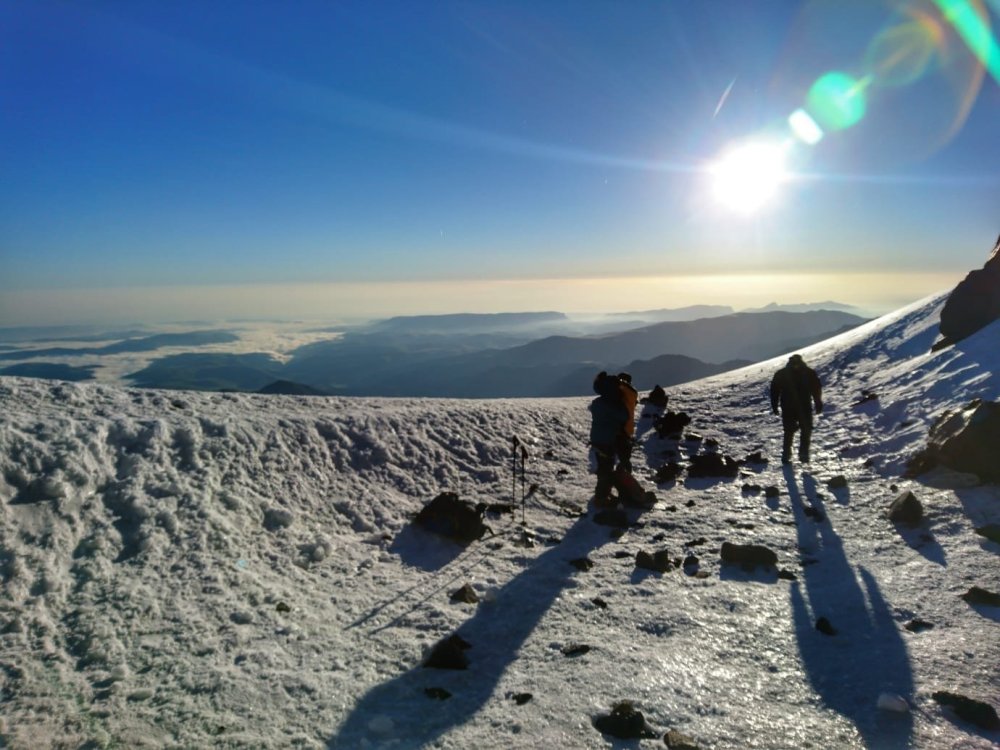 Once we had composed ourselves, although I was still not composed we re-clipped and upwards we went. Steep climb after steep climb.

I got sick again.

We eventually reach another section which looks like it goes up for miles. We are able to unclip from one another here which is a relief.

I remember at this stage feeling really weak. I had been sick now several times so I had no food in my stomach, not a good idea whilst trying to summit Mount Elbrus and with no sleep from the night before.

Our route gets steeper and steeper as we gain the upper summit plateau.

We walk on, I continually push myself forward. Sometimes thinking, sometimes not…feeling numb most of the time.

At this stage I am trying to force myself to take 10 steps then stop I can only manage 4…it’s horrendous, pure physical and mental torcher.

I remember some of my thoughts being random, but most of the time just feeling numb, thinking mostly about simply stepping forward, actually having to force my brain to tell my feet to move!

I remember promising myself never again will I do something so stupid.

I remember speaking out loud to myself, giving myself a good telling off for feeling so exhausted and not being able to move any more than 3 steps at a time.

I remember thinking if only the boys knew what I was doing, what would they think, I guess they’d be amazed, proud of me or most likely think I was stupid!

And I remember thinking some other personal thoughts about other family members.

And still I went up slowly, very slowly.

By this time everyone was exhausted, we were dehydrated and since 11pm the previous night I had ate 3 wine gums on the way up, my appetite was gone and even the wine gums made me sick.

I ate snow trying to keep cool and rehydrate under the blistering sun.

Before attempting to summit our guide had given us strict instructions regarding cut off times to the summit. So if we were not there by 1pm, no matter what we were turning back, summit or no summit.

We had been taking it pretty slow for one of our group members, not that I was complaining. But then she got pretty sick, and looked on the stage of collapsing. She had to be given medication, drinks etc to try and inject some energy into her body.

At 5250m, we stood on Mount Elbrus, not the actual summit, not the highest point in Europe but 350m below.

Before anyone said anything we knew our summit attempt had just came to an end at that point. 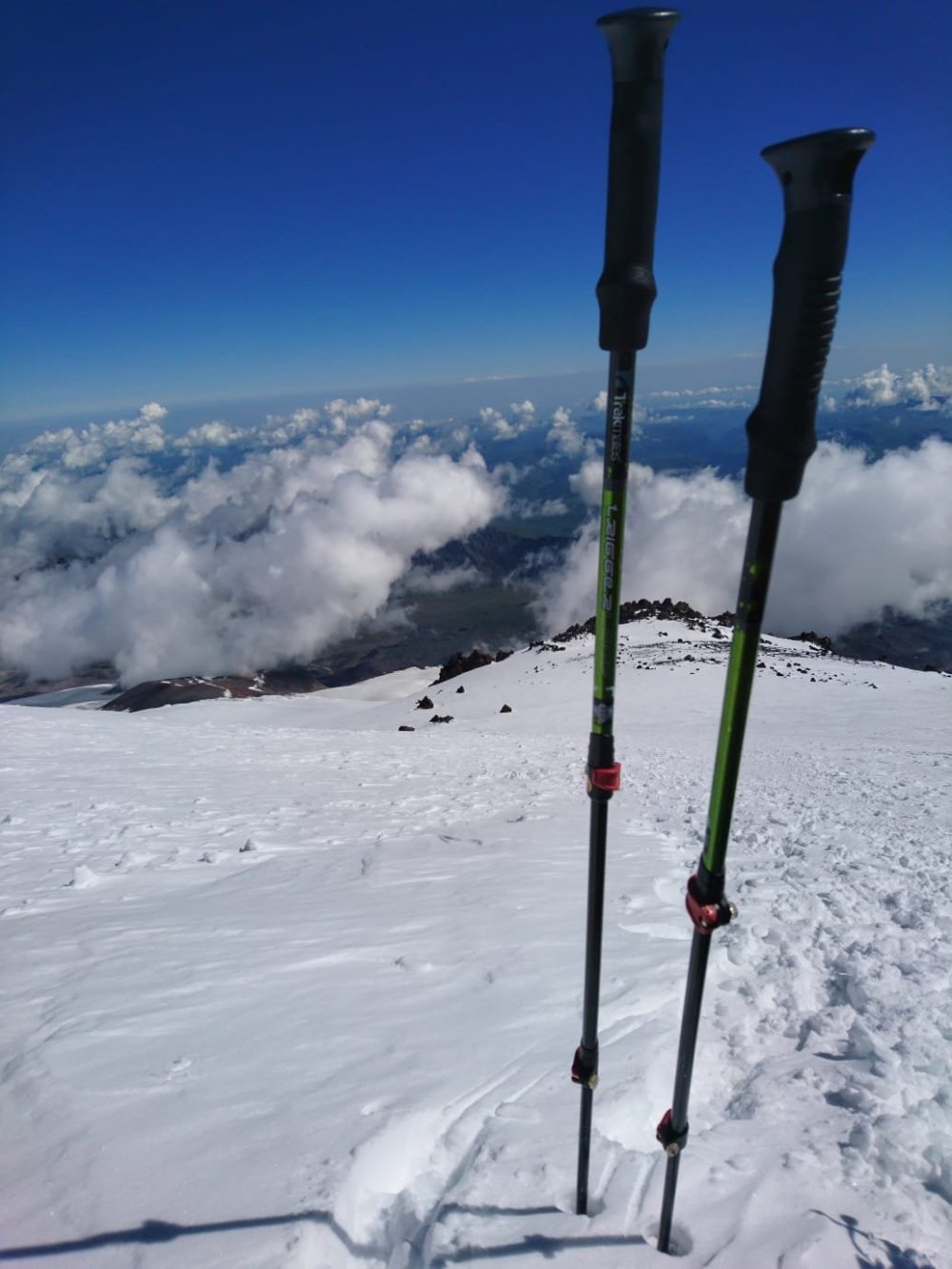 We couldn’t go on, we were a group, we knew the score and we needed to get down and we were hours and hours away from Assualt Camp 2.

However, from where we were standing, below, Russia stretched out before us.

From here we could see the jagged and snowy Caucasus Main Range to the south marking the border with Georgia and the immense sweep of the green pastures rolling into the blue haze of the horizon to the north…we just didn’t get the full 360 degree view, or the opportunity to stand at that highest point in Europe.

But the sights were breath-taking all the same.

I stood silently in my own thoughts, having that special moment.

There are some things and some experiences in life, that are too beautiful to put down into words or was I too exhausted to think of words at this point!

Its moments like this one that you can truly respect and appreciate our beautiful planet – she truly is amazing!

Being on top, taking it all in, feeling what I felt I will never forget the moment.

Once everyone was sorted we finally began our descent to the assault camp.

It had been a long long day, an exciting and exhausting one and there was still a long way to go.

The way down was long and tiring but for me I was caught up in my own thoughts.

That’s what I like about walking. It helps me to make sense of things, see the world differently through new eyes.

The girl who was struggling continued to struggle and we had to make several stops. She was feeling faint and sleepy. At this stage it had gotten hot again so we tried to strip layers off her to cool her down and we fed her some more energy drinks until she was good to go again….this happened several times.

At points I thought mountain rescue were going to have to be called as I thought no way is she making it back. The walk was long and slow and we had ran out of water..I still had ate nothing as I couldn’t stop my sick feeling. My energy levels were low.

It felt like forever. I remember seeing bits of rock I recognised from coming up and we were a long way from home. I just wanted to get there but we continued to move slowly…sliding our way down the mountain.

On seeing the camp it was a relief. We had done it and we were back to safety…it had been a very long day. I was exhausted at this stage that even taking of my crampons sapped me of more energy.

Clambering over the rocks to our hut took forever as even trying to step up on to the rocks was exhausting…getting up the stairs to the hut another mountain to climb.

By the time I got inside I remember getting myself into bed…I managed to take off my boots and jackets but nothing else…then everything from there went a bit blank/hazy! Exhaustion had kicked in.

I was told the next day that one of our group had been hallucinating and thought one of us was going to die…it was all totally crazy messed up stuff! Altitude, exhaustion, emotions all playing their parts!

By nighttime everyone must have been tired because the next thing I knew I had woken up and it was dark. I looked at my watch and it was 10.30pm…I was still in full hiking gear and I hadn’t been to the toilet or brushed my teeth and I still felt horrendous, not even knowing if I could make it outside.

Once back inside, I got tucked back up in my sleeping bag and I tried to process the day but I was too exhausted. I did however know that I had experienced something beyond the usual. I lay still, thinking that I will eventually look back on this and smile because this was life and I sure had decided to live it!

Tonight I can truly understand what Sir Edmund Hillary meant when he said “It is not the Mountain we conquer but ourselves”….for me this climb had enabled me to face my fears both physically and mentally, manage change and turn obstacles into opportunities…a little like life in general I suppose…I know now that when there are other ‘mountains’ and challenges in life to conquer I will be up for the task. 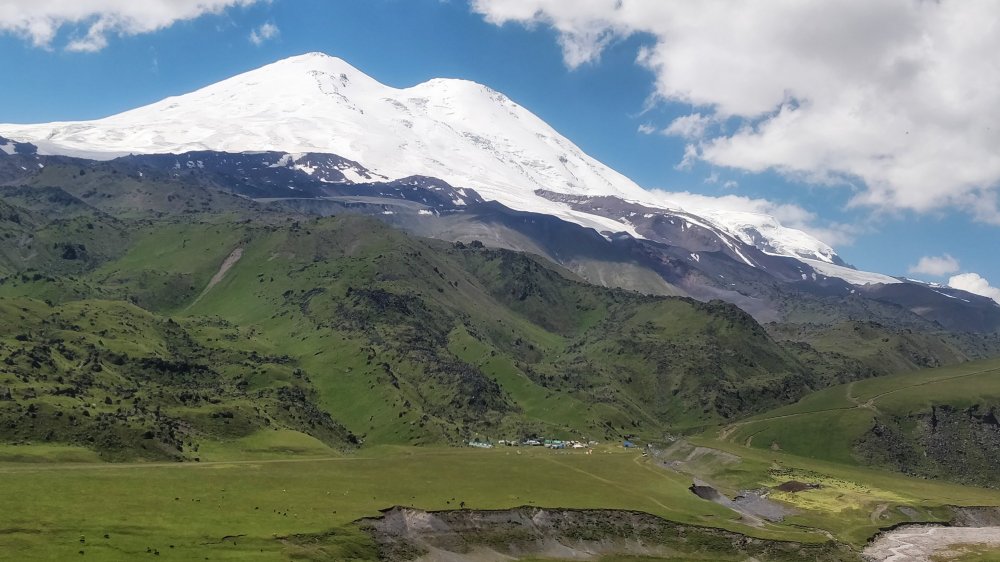 Even up to 7 hours before finishing this climb my body felt finished, totally done in…but this has proven to me how tough our body’s are and how we can push them beyond the unimaginable.

Elbrus has many names in other languages, one being ‘Oshkhamakhua’ meaning ‘Mountain of Happiness’ in Circassian.

Right now I am not feeling that, whilst on deaths door, but I know someday, maybe even tomorrow she will be.