At 6.30 am we welcomed a new day. We had some breakfast outside in a beautiful spot.

The local chef then decided to enrich us with a ‘cooking class’ or maybe a ‘baking class’.

We were going to be making ‘local cake’ – we made pan fried sweet potato hash browns and they tasted good!

Family be proud!! They were that good though I ate them and forgot to take a photograph of the end result! 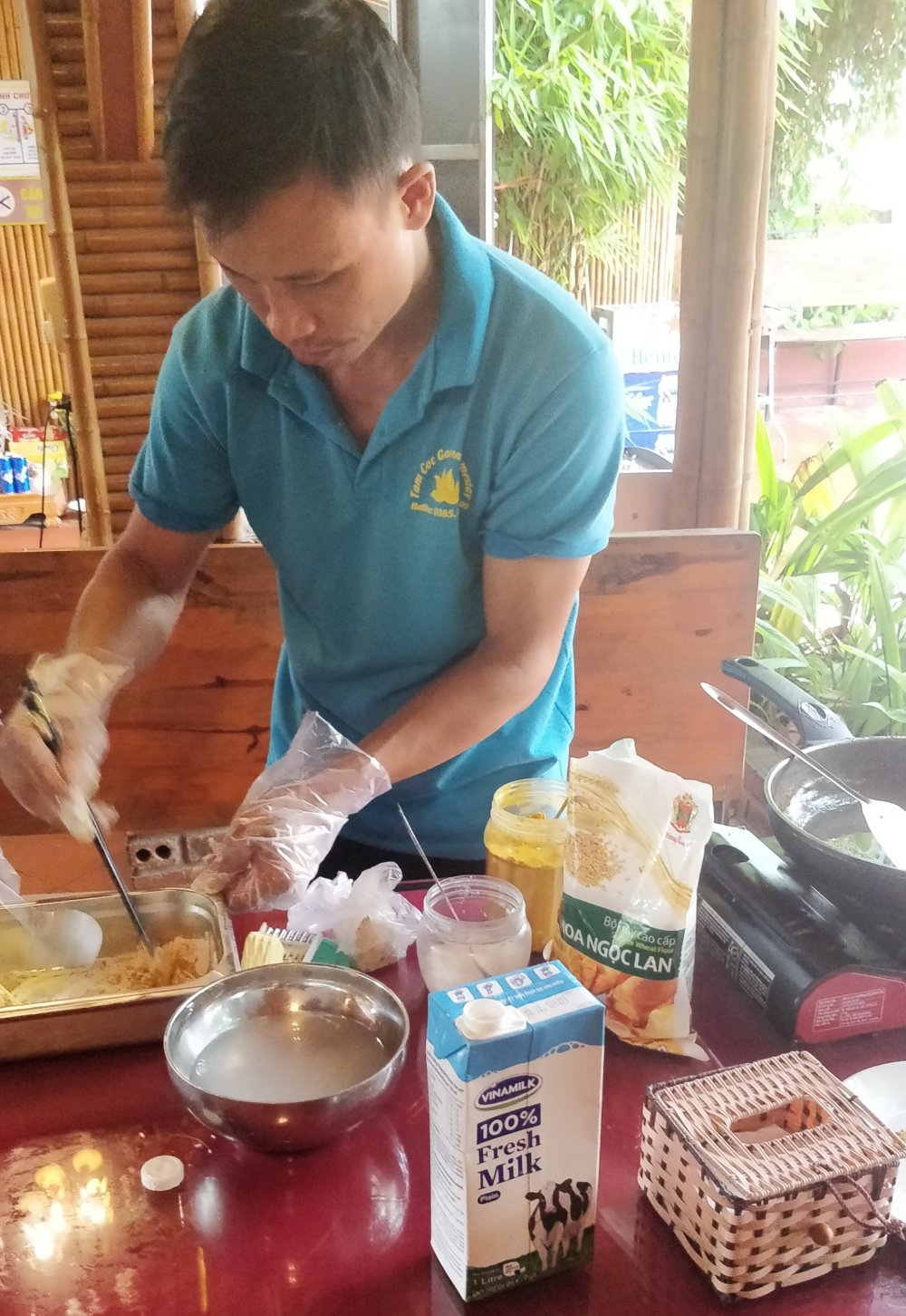 Today we were off to visit Hoa Lu in the Ninh Binh Province.

Hoa Lu was the ancient capital of Dai Co Viet (an old name of Vietnam), and is the site of a 10th-century capital of an ancient Vietnamese Kingdom. 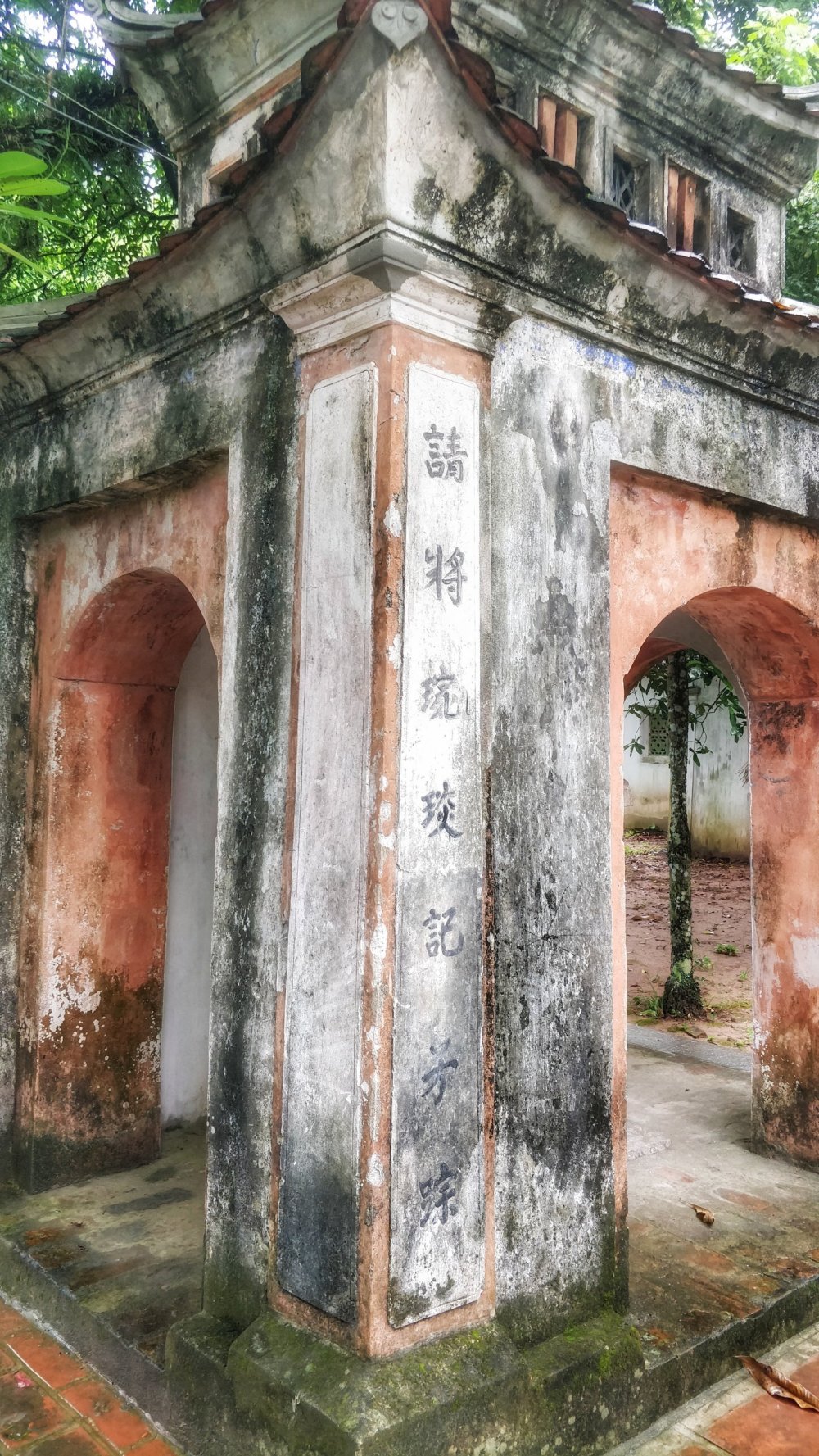 This was once the economic and political centre. It has a variety of historical places to visit. 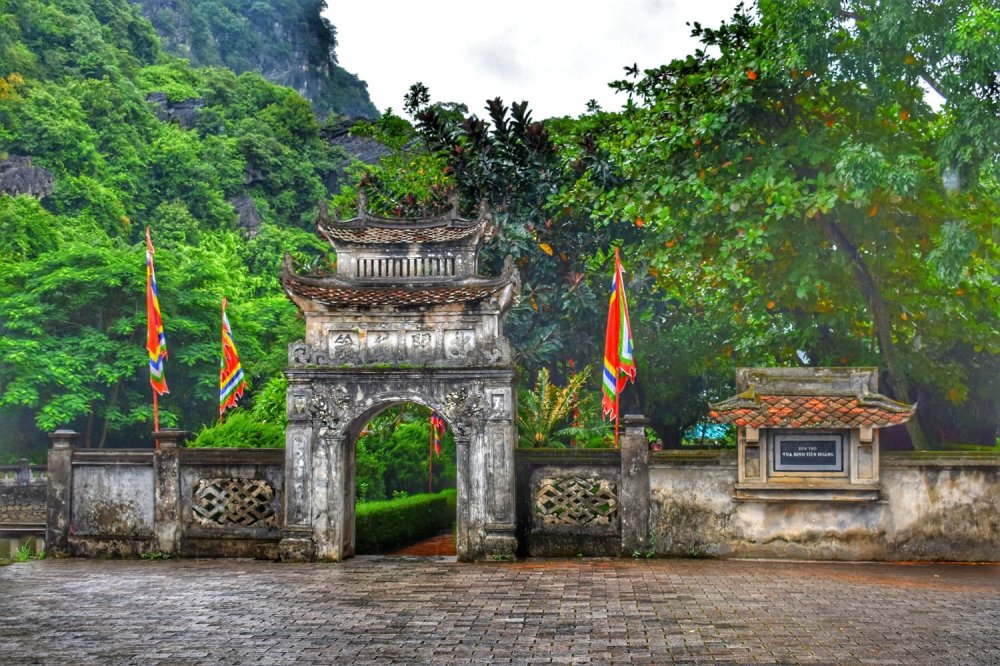 On reaching Hoa Lu first and foremost you can witness the many temples where people worship the Emperors and royal people that ruled here more than 1000 years ago. 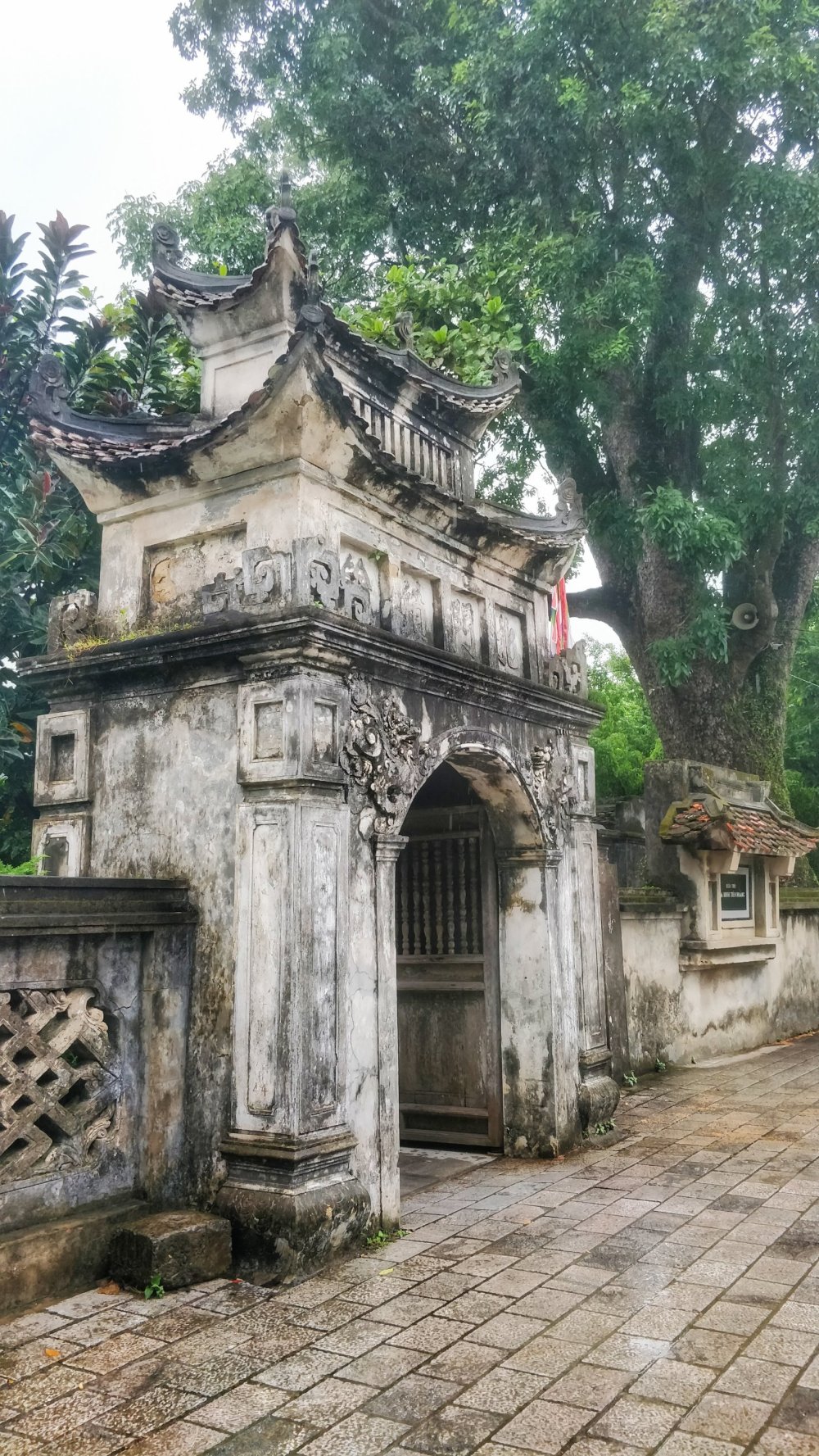 Around these temples, modern business runs and modern Vietnamese go about their daily lives.

Hoa Lu is surrounded by high limestone mountains, it is such a beautiful ancient city. 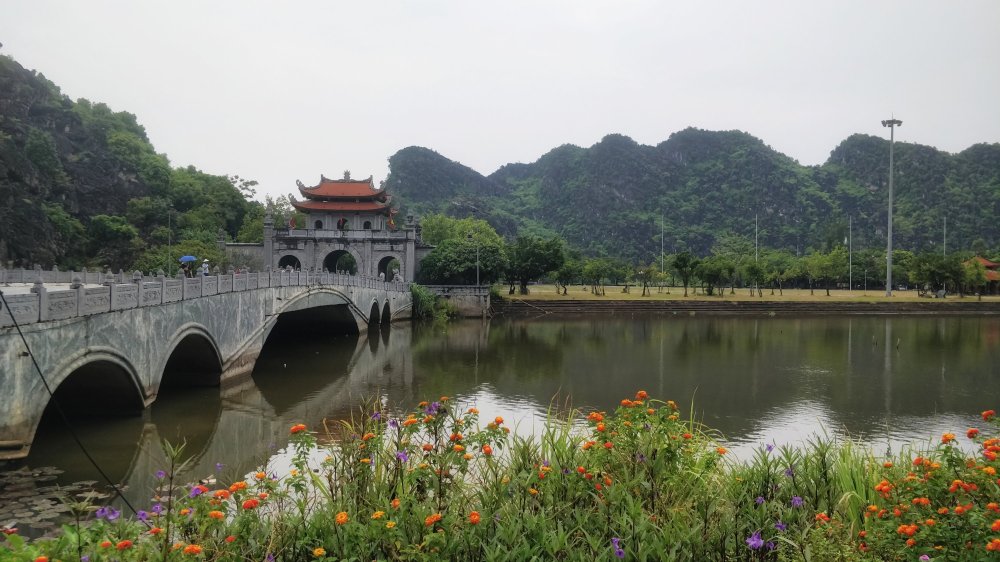 They say back in the day that these mountains kept the city well hidden from potential invaders and protected the city as most of the mountains are only accessible to mountain goats!

To further fortify the city the inhabitants constructed walls around it using wooden planks and piled earth around these.

Historians estimated that these walls reached 10-15 meters high and were equally just as thick.

The waterways of the Hoang River provided a convenient way for trade and business.

Hoa Lu is a beautiful spot to soak up some ancient Vietnamese history and admire the stunning natural scenery. 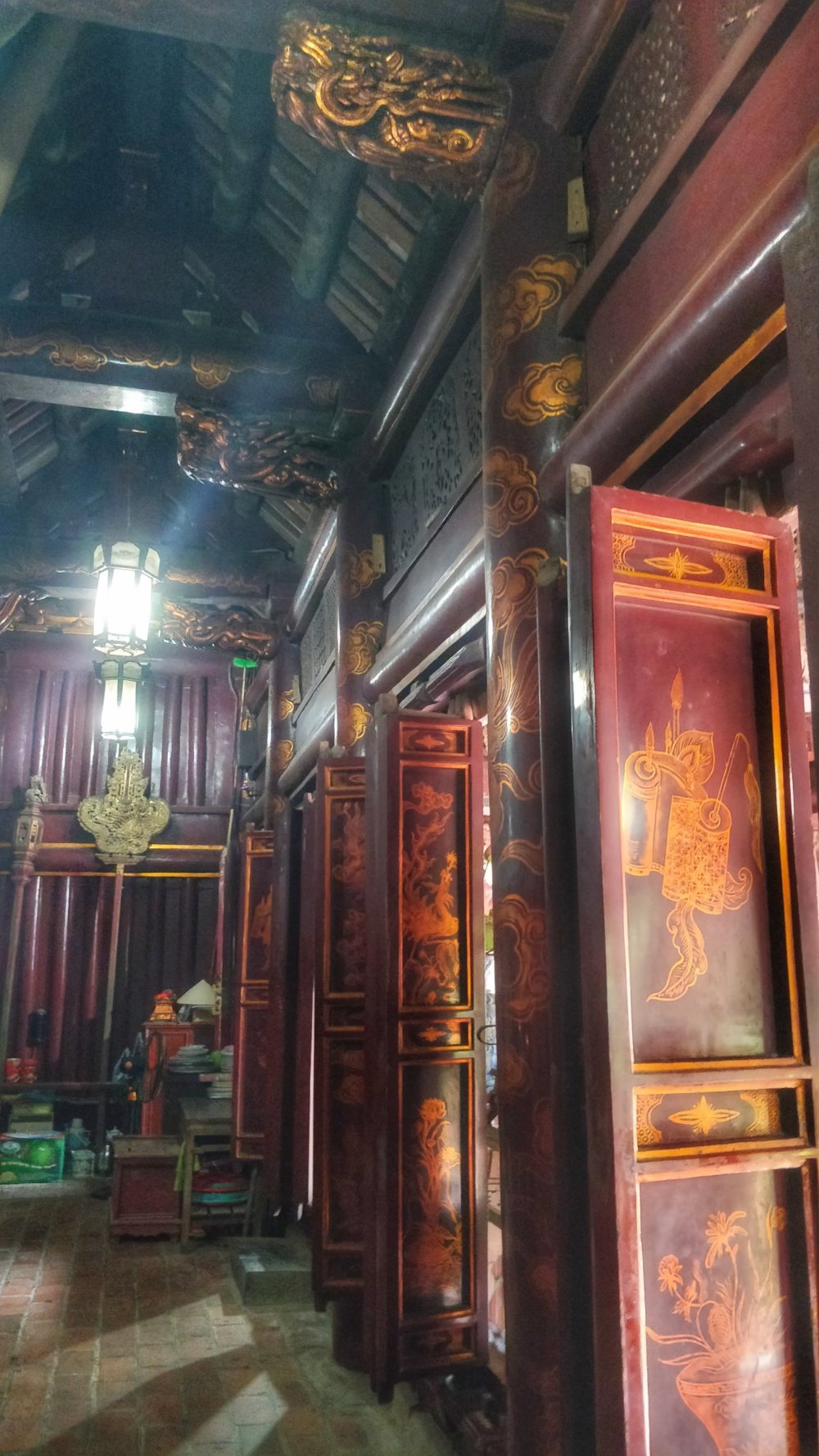 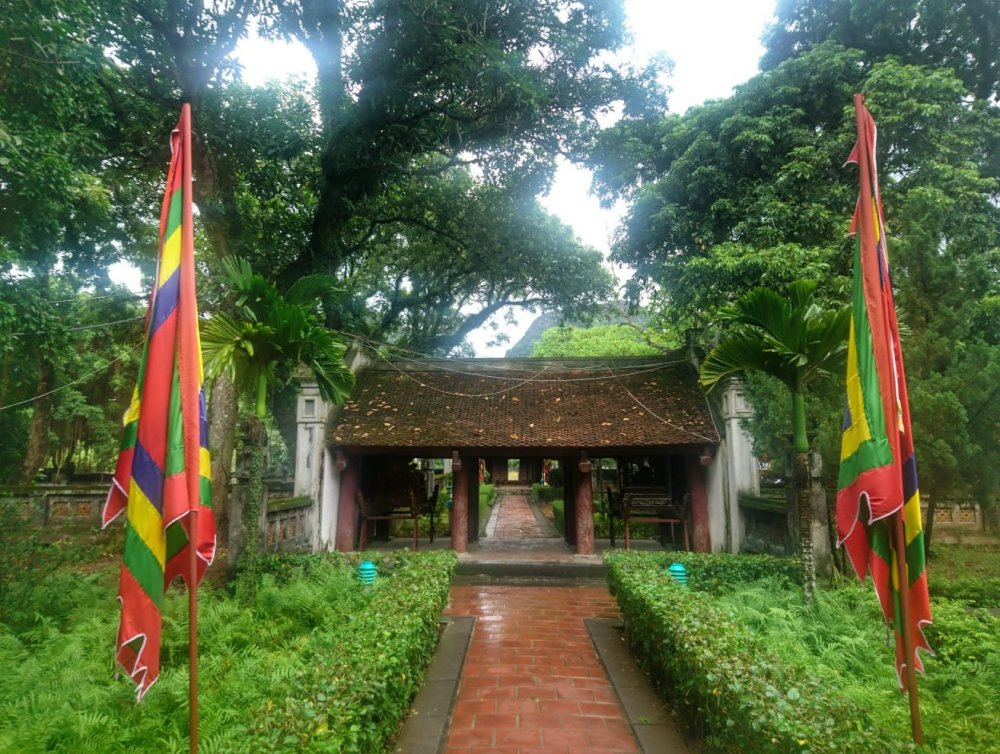 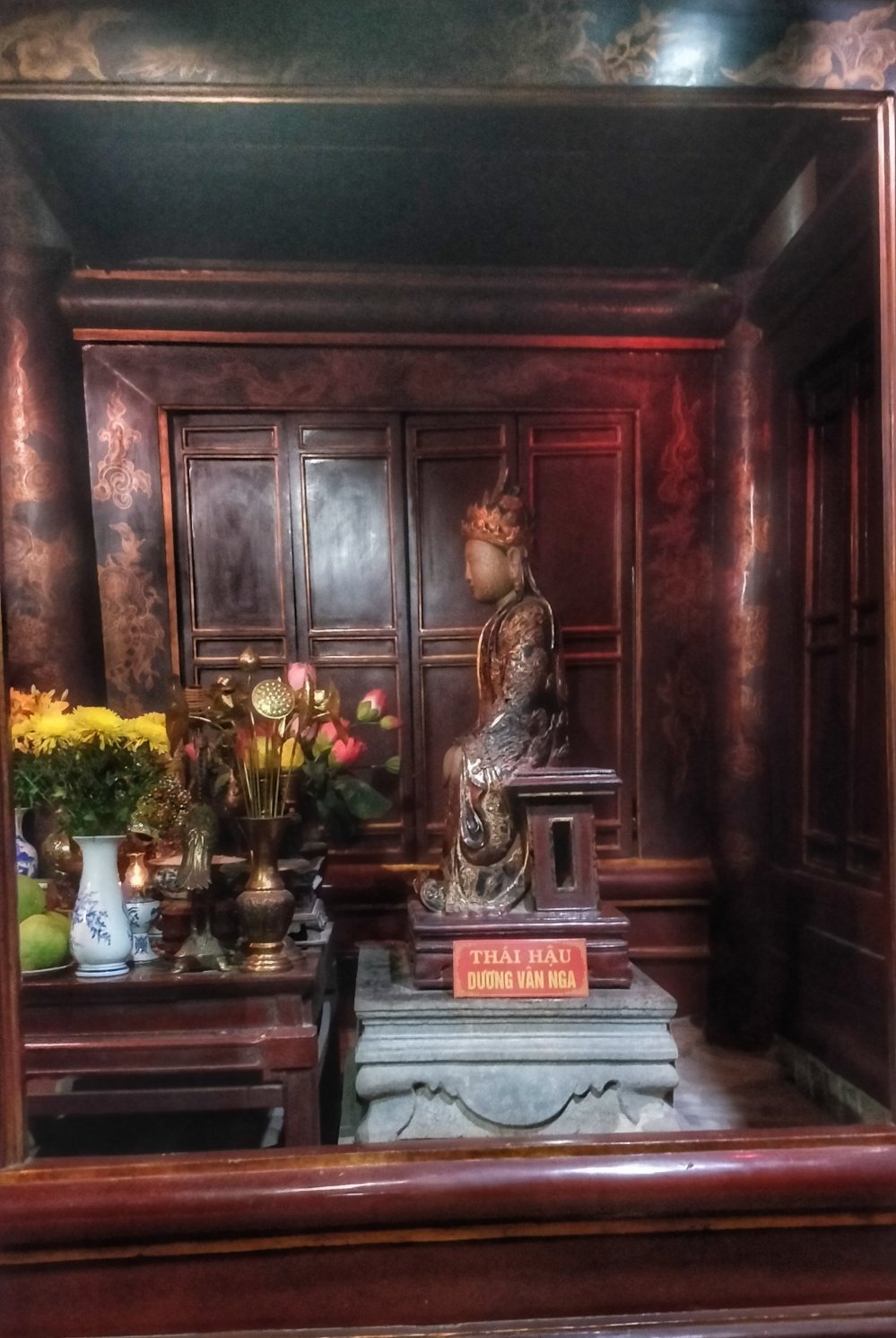 It was pretty spectacular to see and wander through. 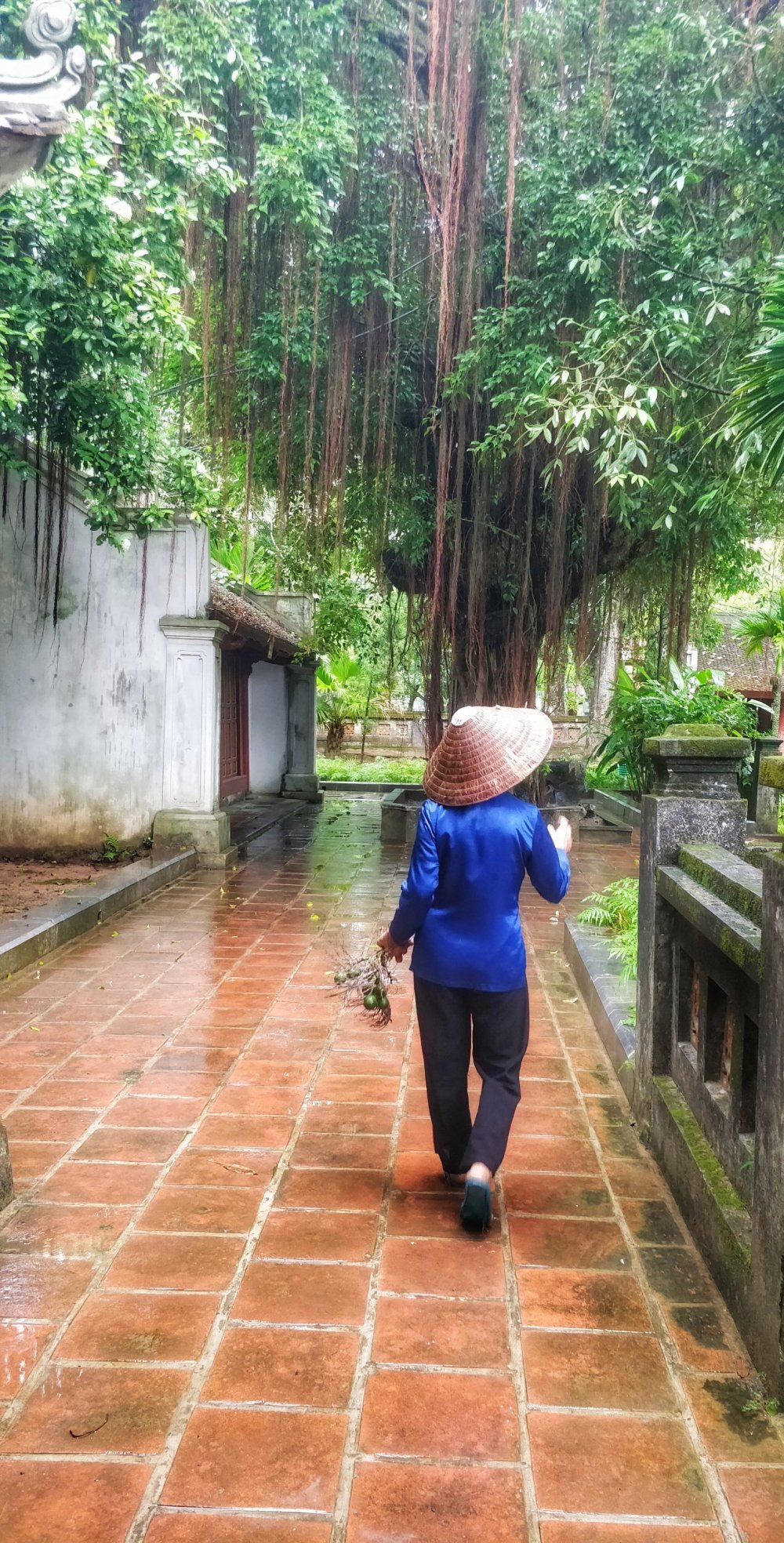 Lunch was some more Vietnamese Cuisine.

Then it was time to catch the bus back to Hanoi.

We had hired a local young guide for our two days in the Ninh Binh area named Tāng aka Ivan, who had graduated from university after studying tourism.

Needless to say he was vey knowledgeable and passionate about Vietnam and it’s history. He was able to go in to great depth about the history of Vietnam, Temples, Pagodas, Buddhism, folklore and much much more! 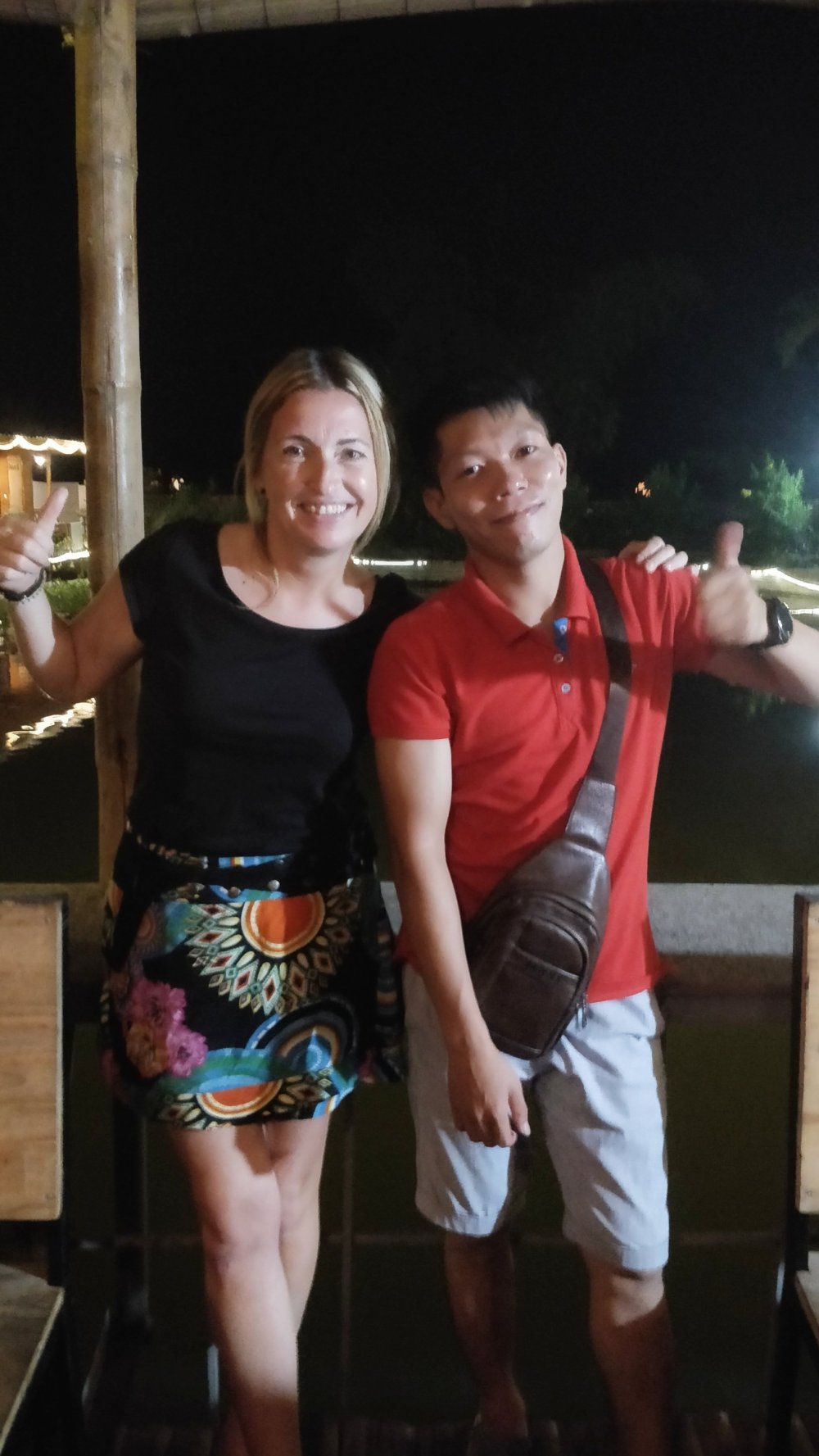 We also got to find out about his life, which included his grandfather who fought in the Vietnam War.

His grandfathers transport vehicle was blown up and he was the only one who survived.

Ivan was very close to his grandfather and you could clearly see he was very emotional talking about him.

He was also a very humorous guy who told us about his ‘love journey’ aka his love life.

This will be our last ‘proper’ visit to Hanoi – we come back here for one last night in a few days but its literally just to eat and sleep before heading of again early the next morning.

So we wanted to visit St Joseph’s Cathedral which is a Roman Catholic cathedral done in a Neo- Gothic style. It was built around 120 years ago.

The cathedral was constructed and completed in 1886, after the French army conquered Hanoi.

The architecture clearly follows the rules of the Gothic style and design of Paris Cathedrals. 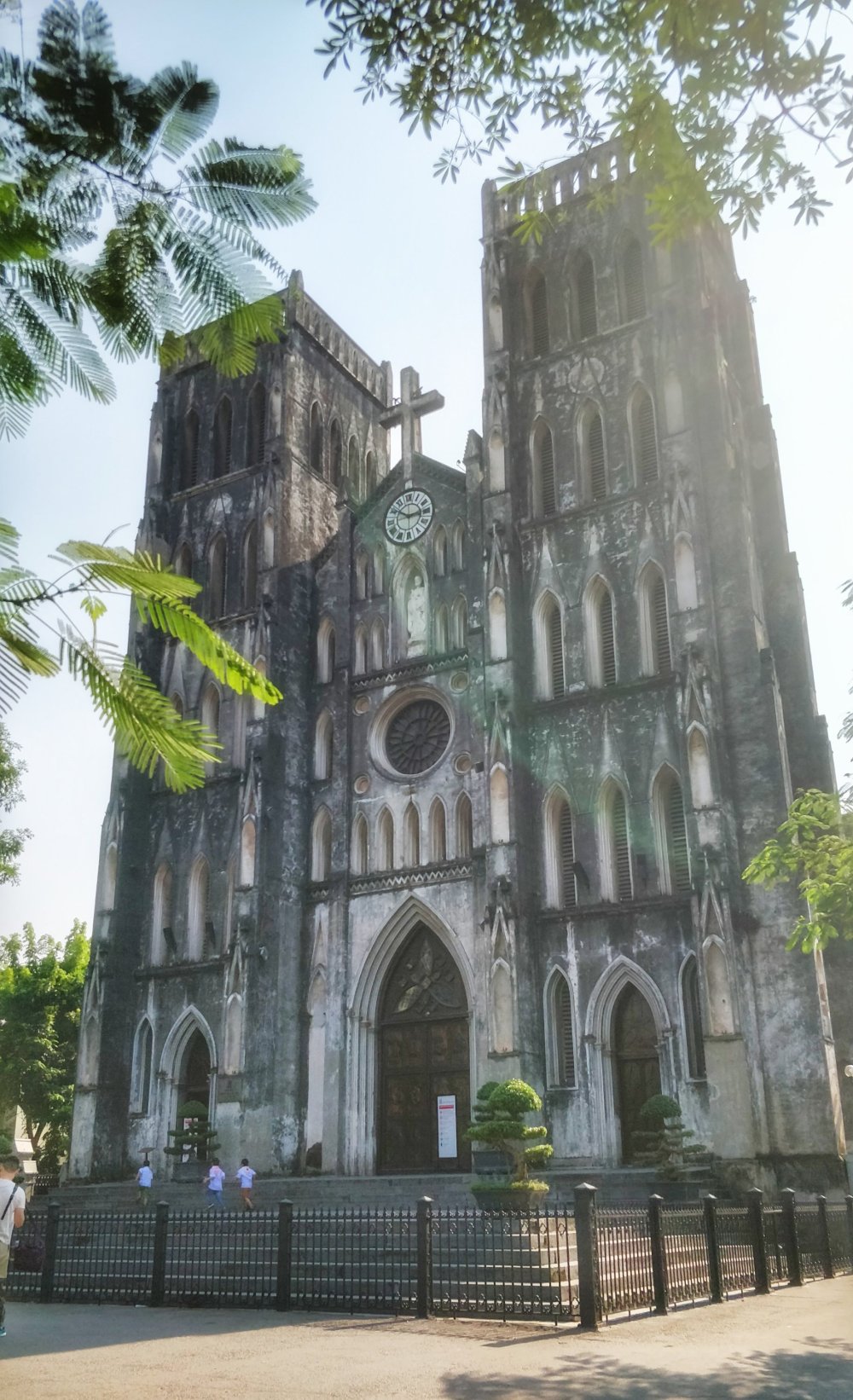 We also had to pay a visit to Maison Centrale aka Hanoi Hilton aka Hoa Lo before we left. 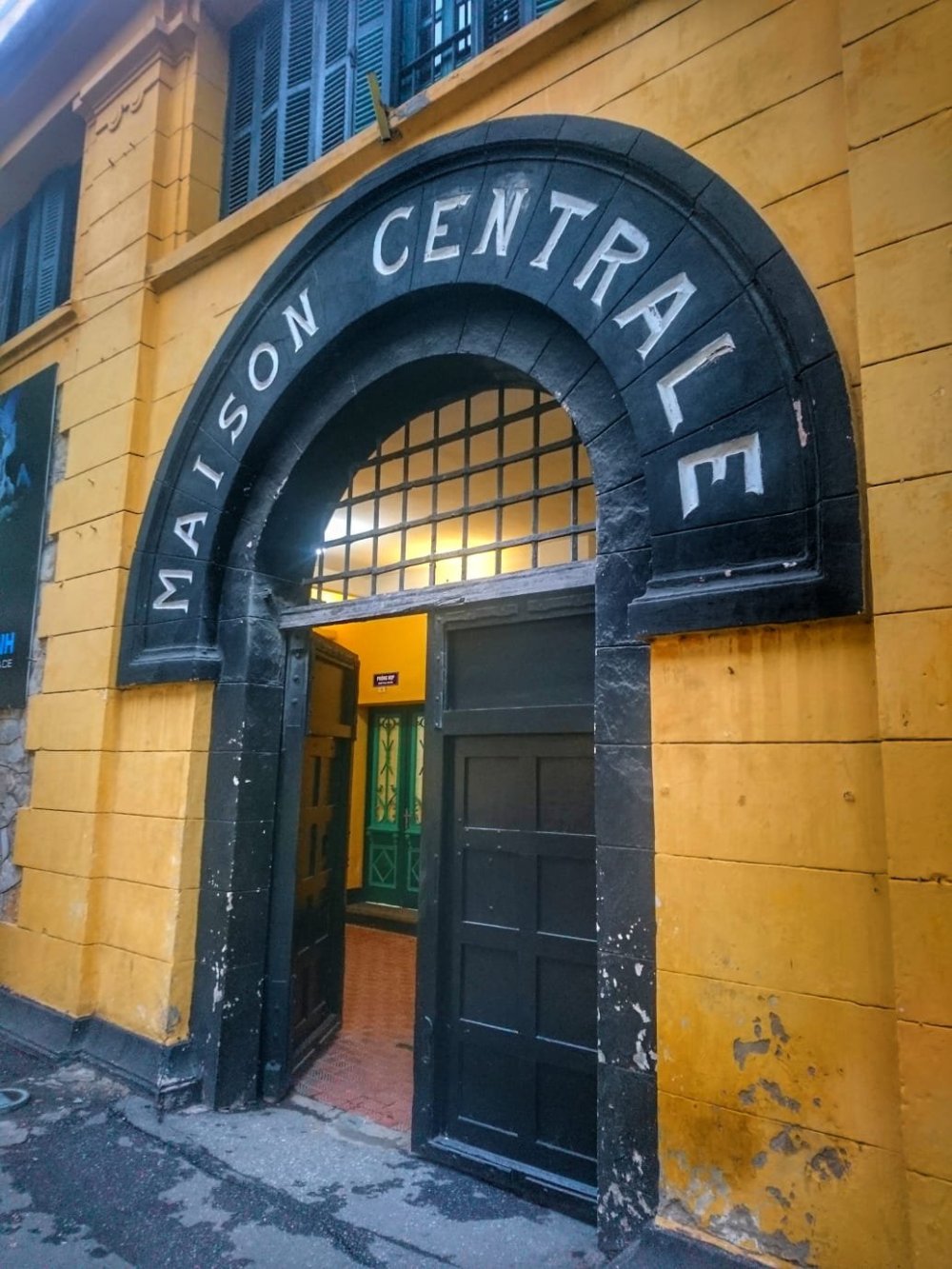 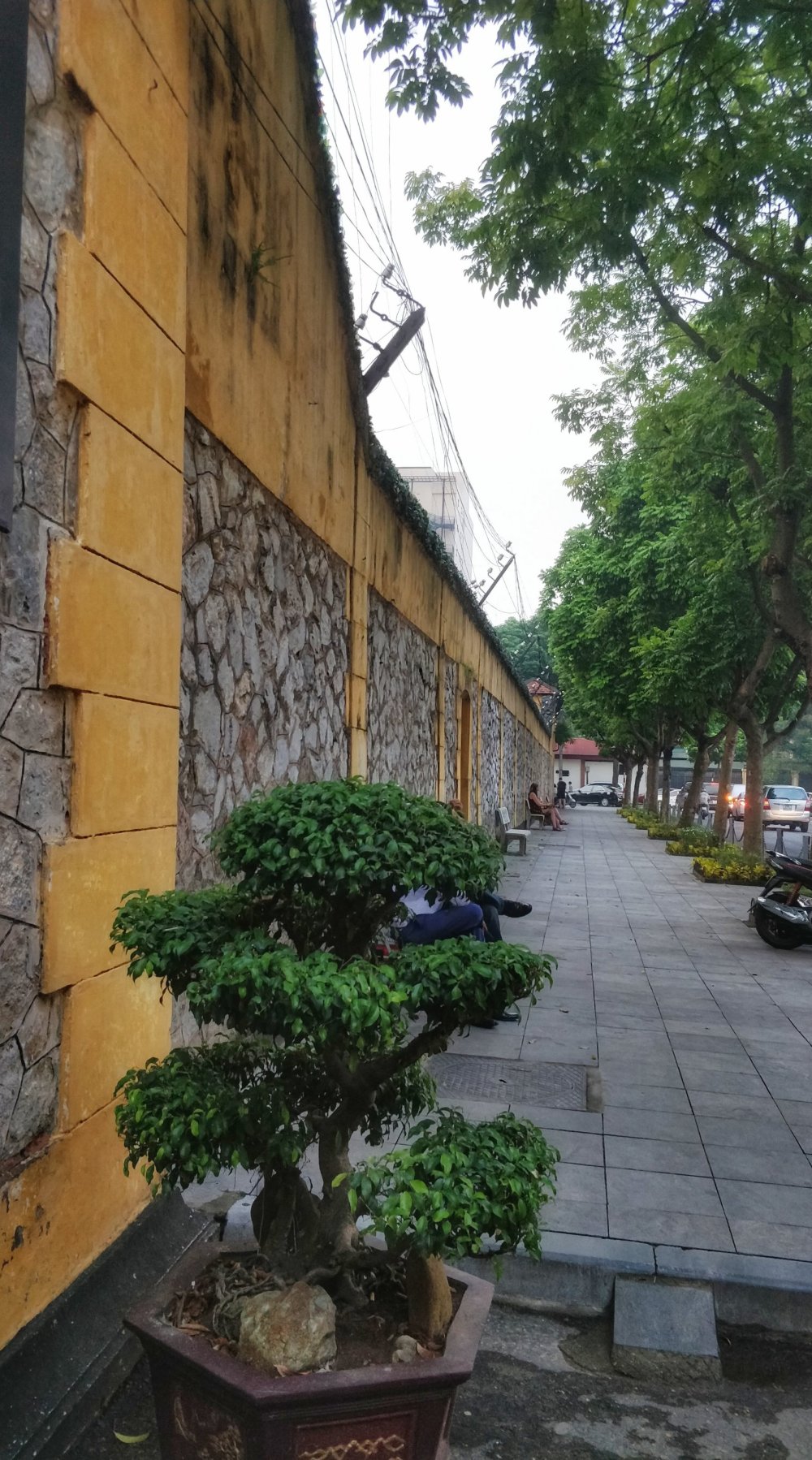 Hoa Lo Prison was built by the French colonialists in 1896 to hold thousands of Vietnamese patriotic and revolutionary fighters.

Since the restoration of peace and liberation of Northern Vietnam on October 10th 1954, the Vietnamese Government used Hoa Lo Prison for criminals.

From August 5th 1964 to March 29th 1973, part of the prison was used for captured American pilots who were shot down in North Vietnam, including John McCain.

In 1993, to meet the development requirements of Hanoi Capital City the Vietnamese Government decided to demolish part of Hoa Lo Prison for the construction of Hanoi Tower.

The remaining area was turned into a historical relic site. 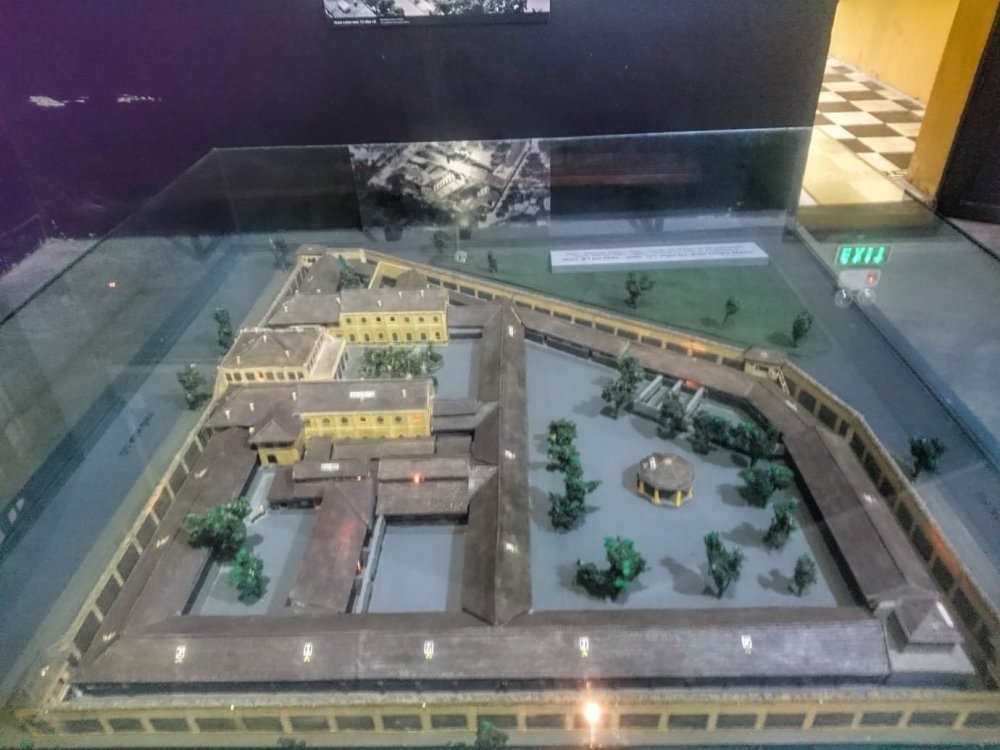 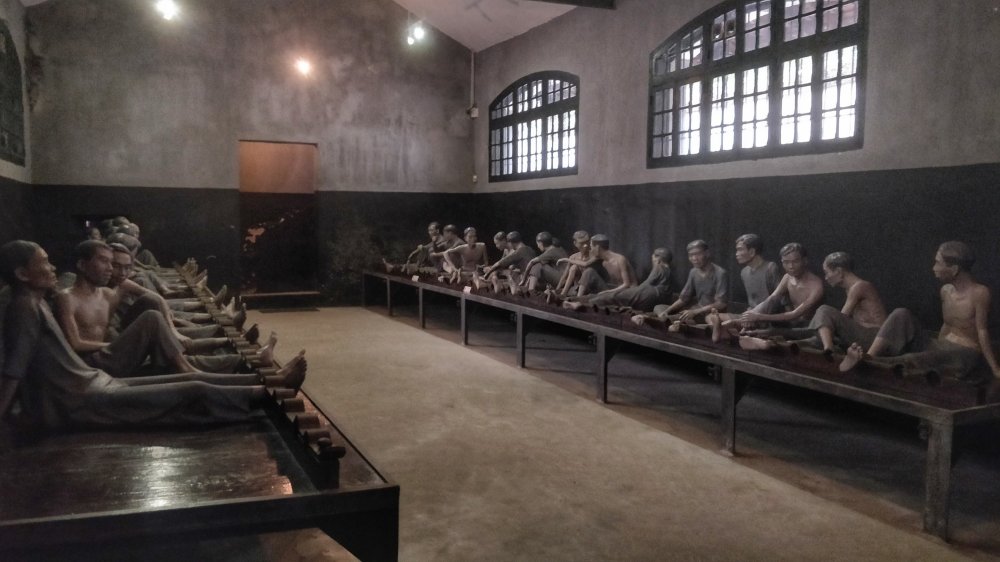 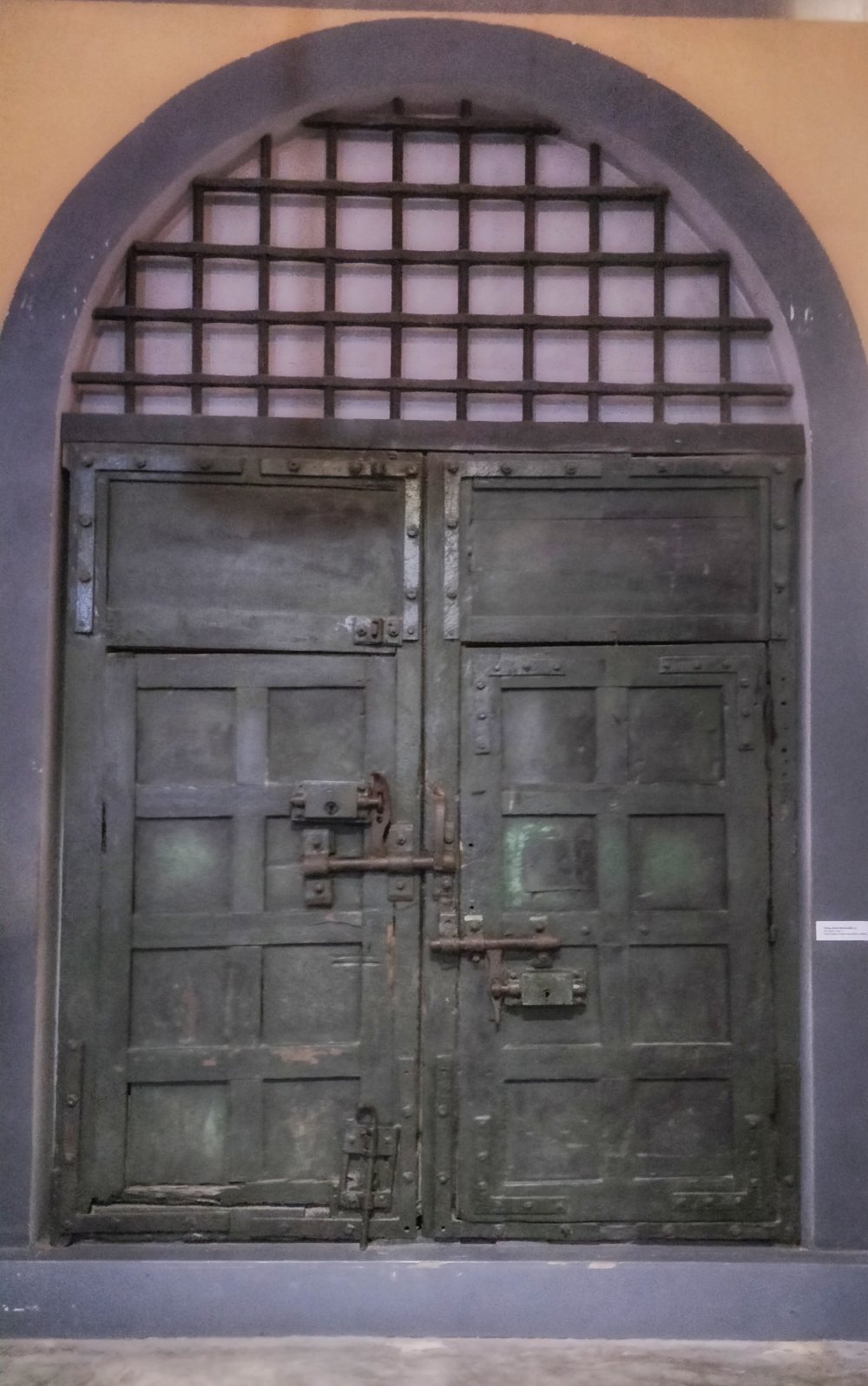 Many precious documents and exhibits were displayed including photogrphs, a guillotine, cells holding death sentenced prisoners, underground sewer gates, exhibits related to American prisoners of war (POWs), the flight suit of a Pilot and many more exhibits. 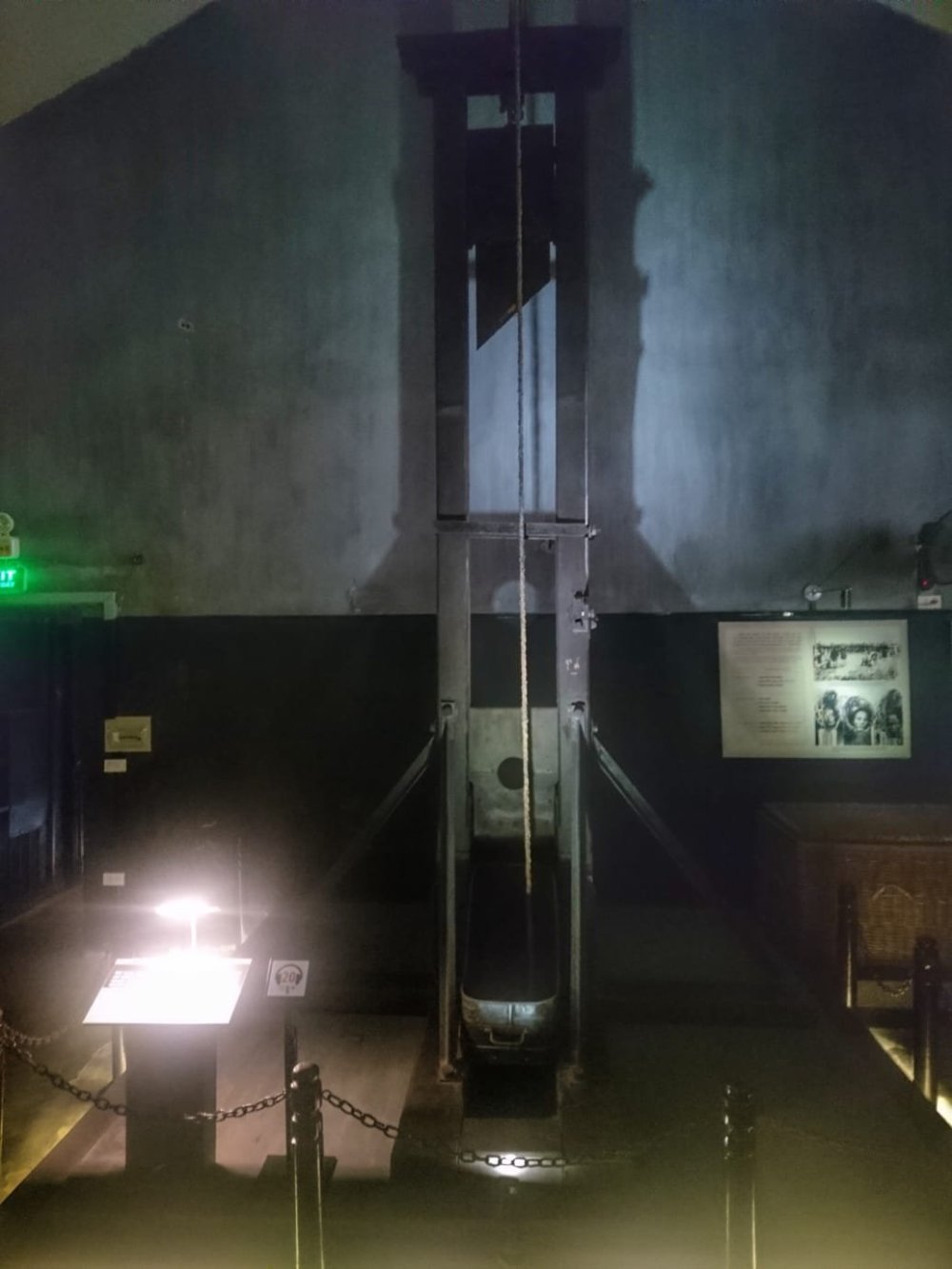 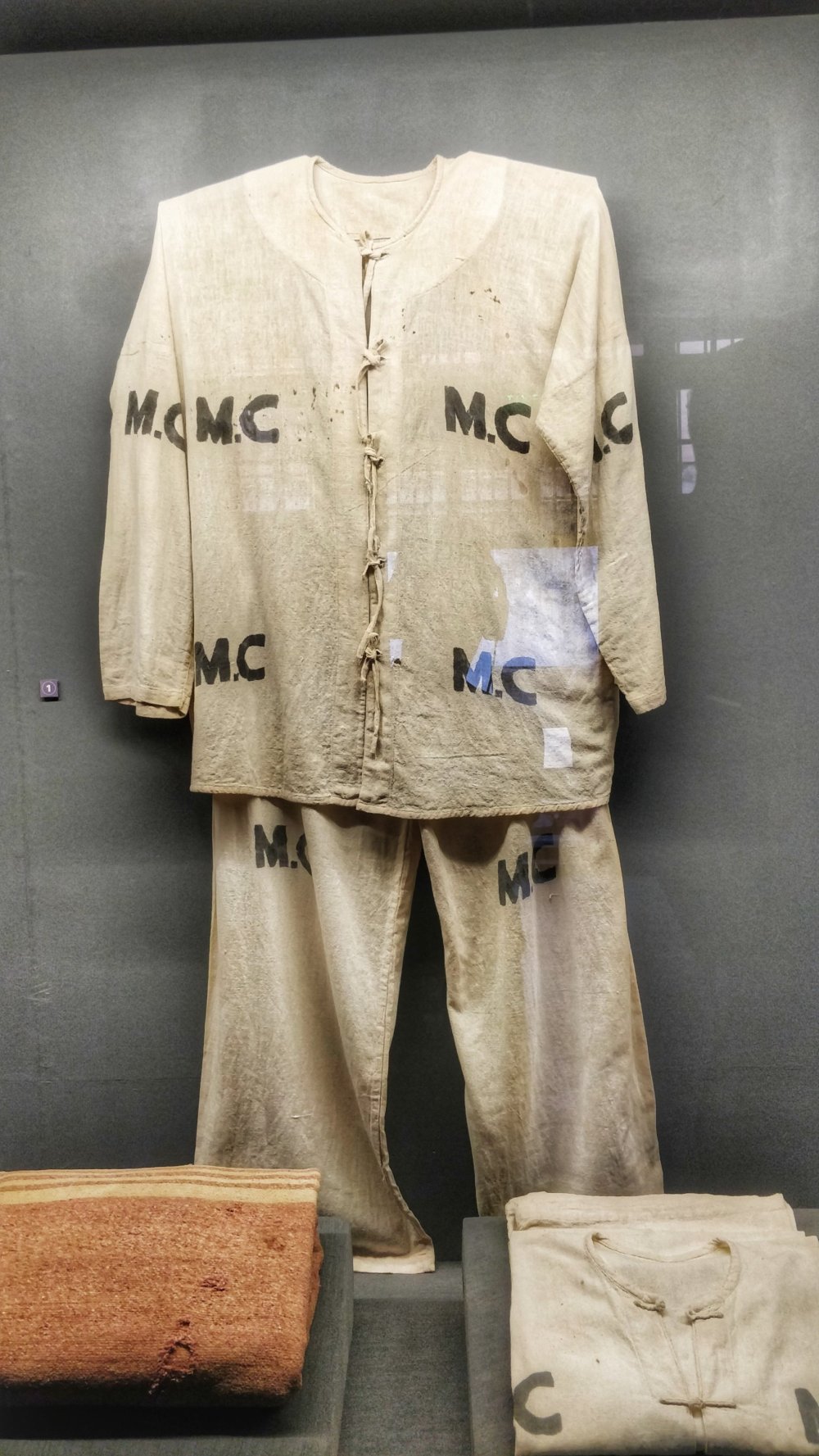 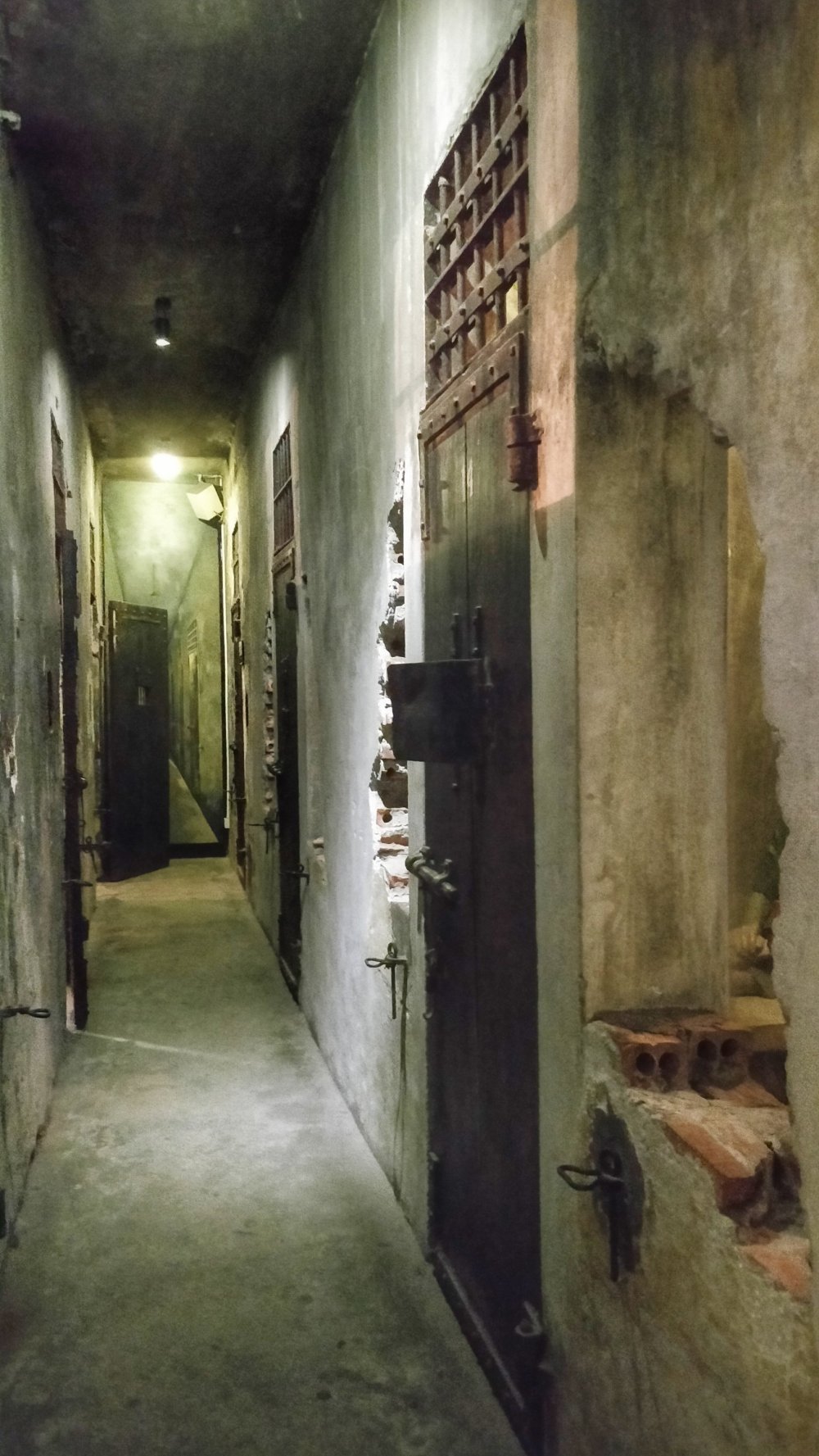 It was certainly a thought provoking site. I experienced a range of emotions from disgust, sorrow to outrage – how was this allowed to happen. I can now understand why it was called “hell on earth”!

Then it was time for us to ‘walk the line’ one final time. 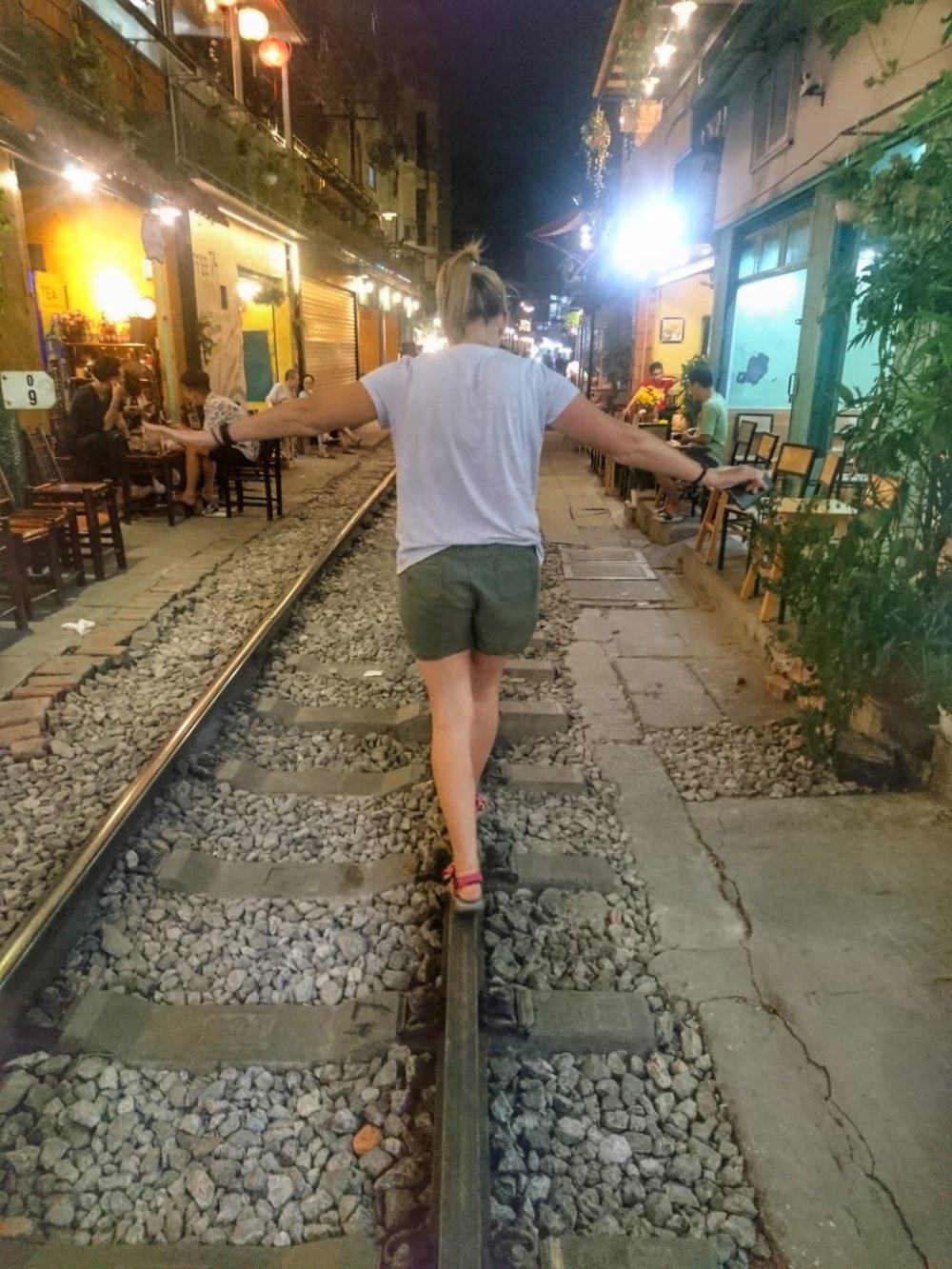 Before leaving we went back to Train Street for one last experience of having a drink on the tracks, walk the railway line and catch sight of that massive train, feeling it’s power as it whizzes past just inches from your body! 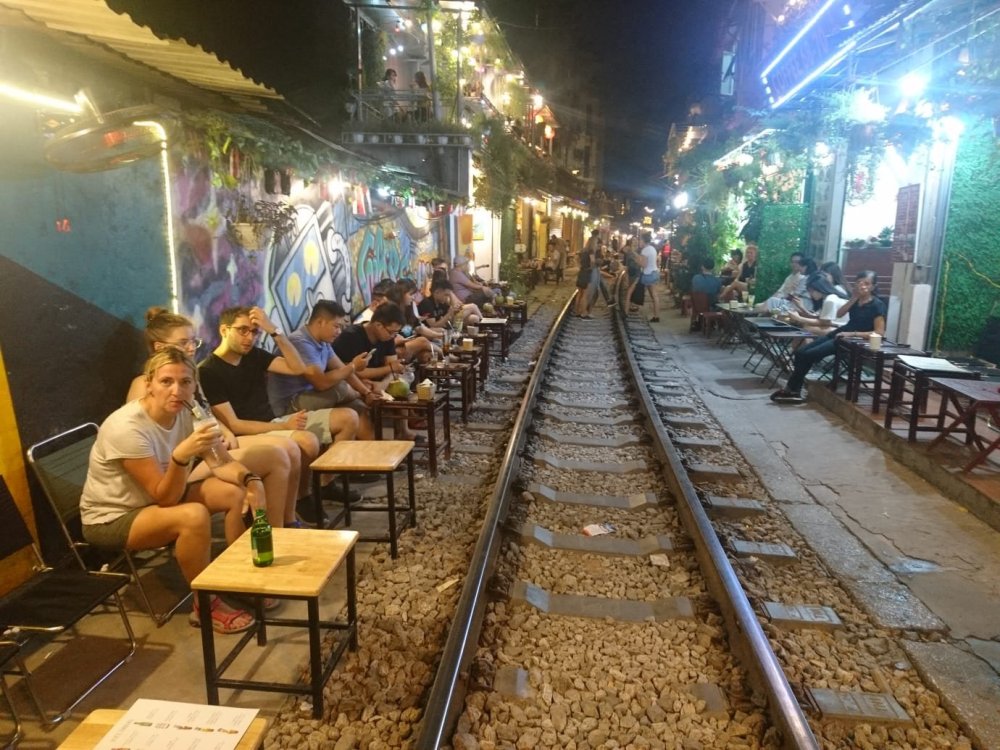 For the most part, the locals who live and move through here go about their ‘normal’ day. They cook, clean pots, kids run around, crosssing the tracks to each others houses, animals snooze peacefully.

The train from Hanoi to Ho Chi Minh will then zoom through at high speed, and then everything goes back to normal as if nothing had happened. 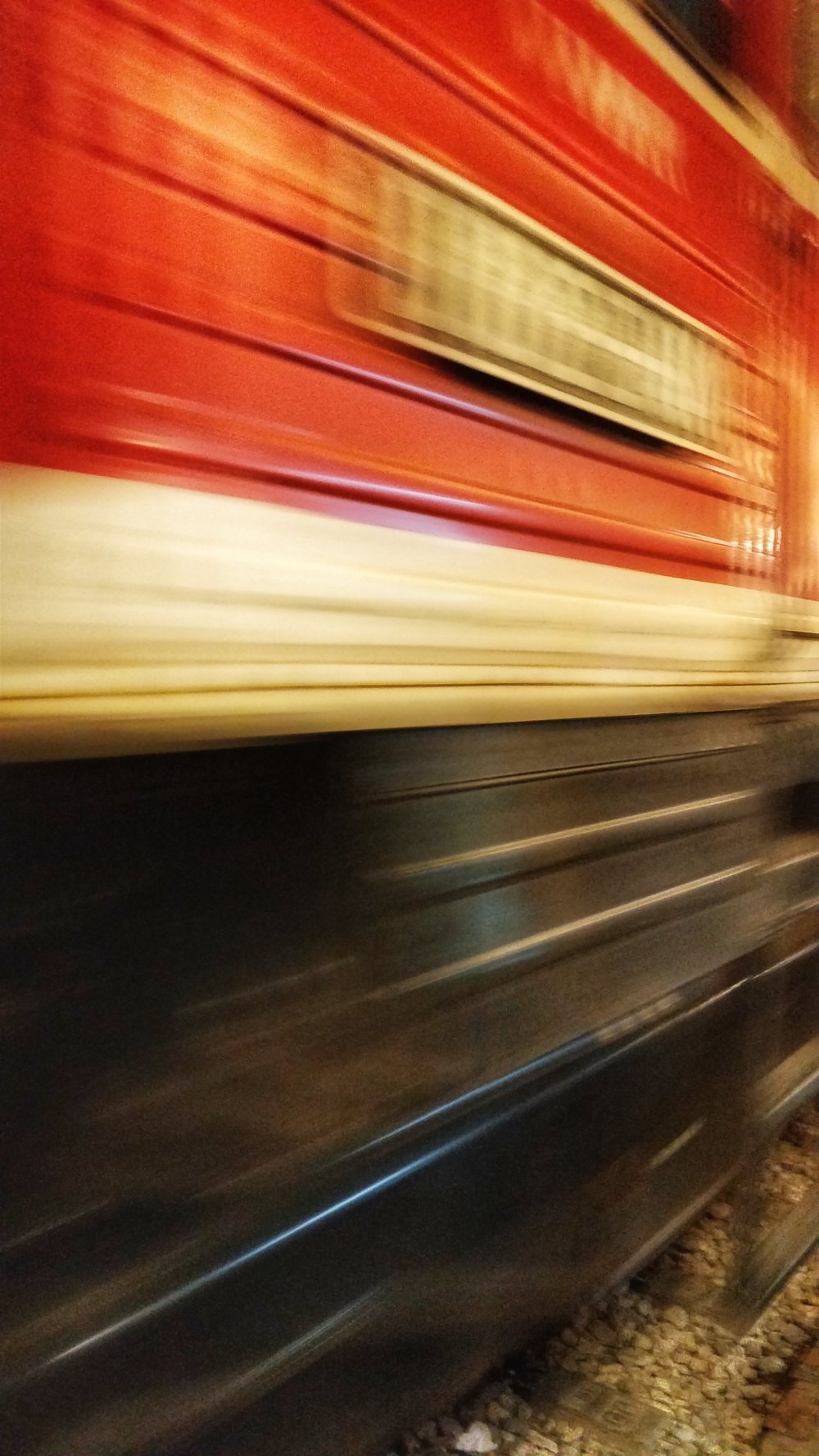 Every single time of coming here I cannot believe what I witness! 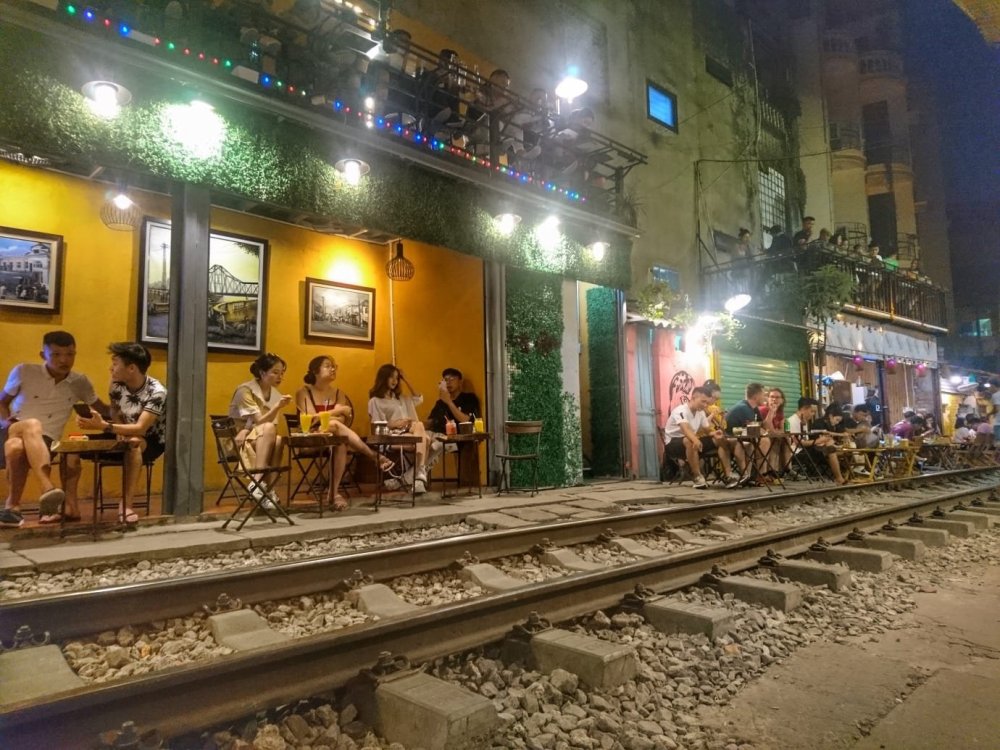 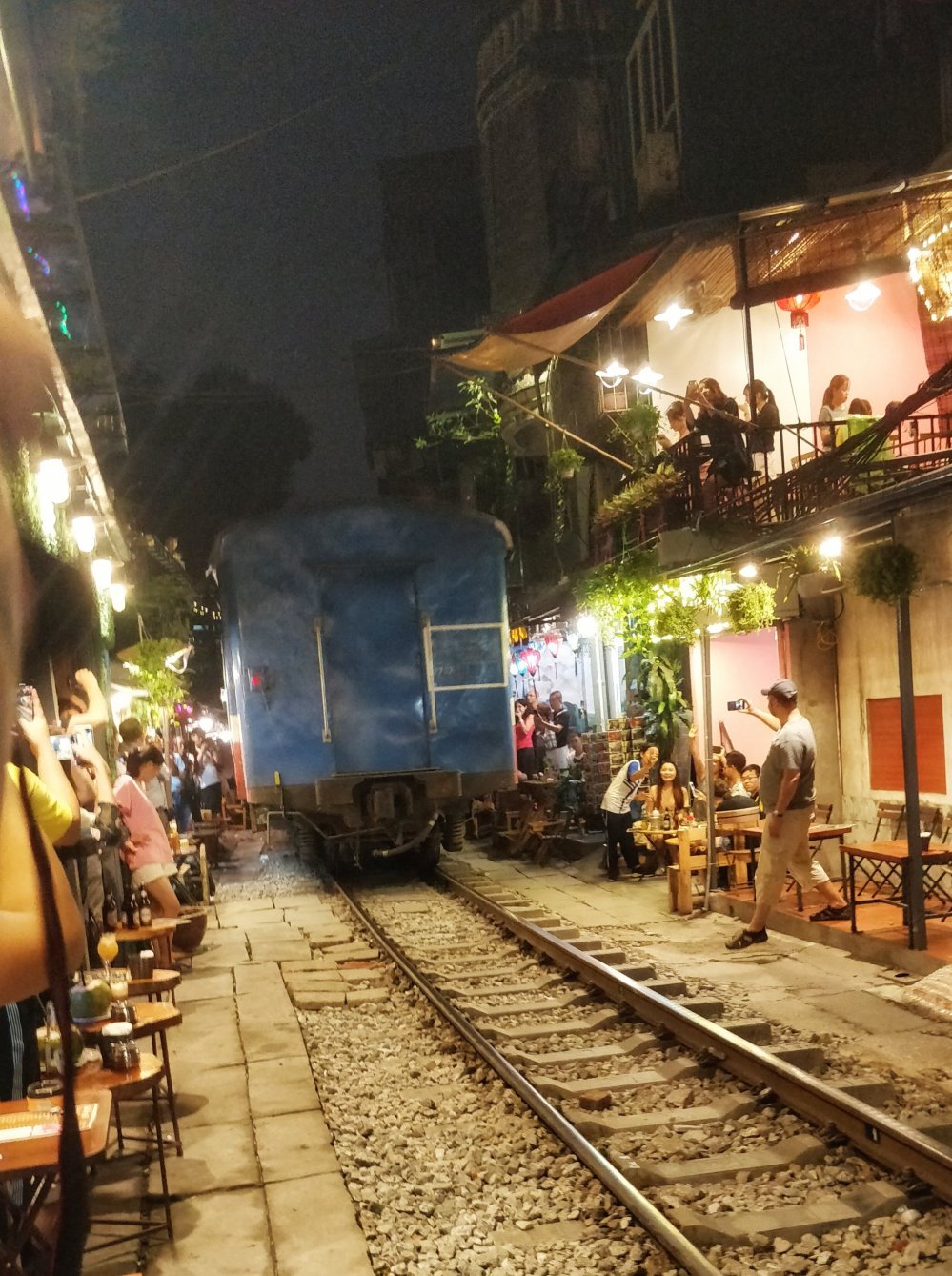 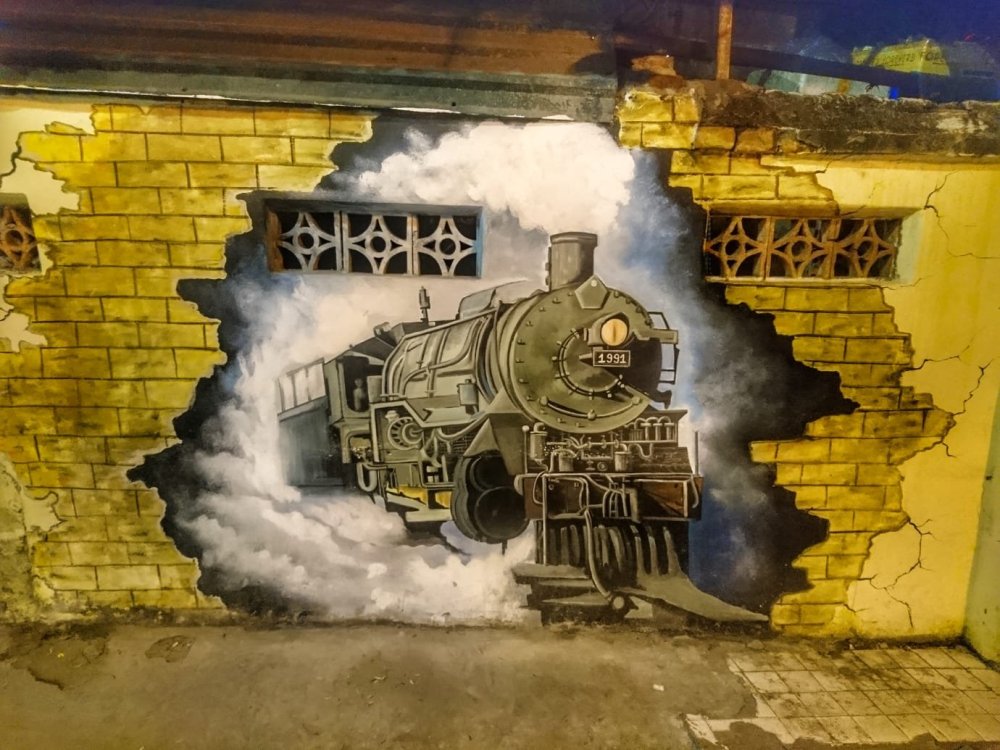 From here it was time for coffee. You wouldn’t believe the amount of coffee shops….they are everywhere and I wouldn’t be exaggerating if I said every second shop was a coffee shop!

So we had a few of course, purely to sample “when in Vietnam do as the Vietnamese do”….it’s brilliant!!

We couldn’t leave Hanoi without sampling their famous egg coffee, “ca phe trung”, where egg yolk and condensed milk are whipped together to make a sweet airy head.

The most famous cafe for serving this drink Giang Café. 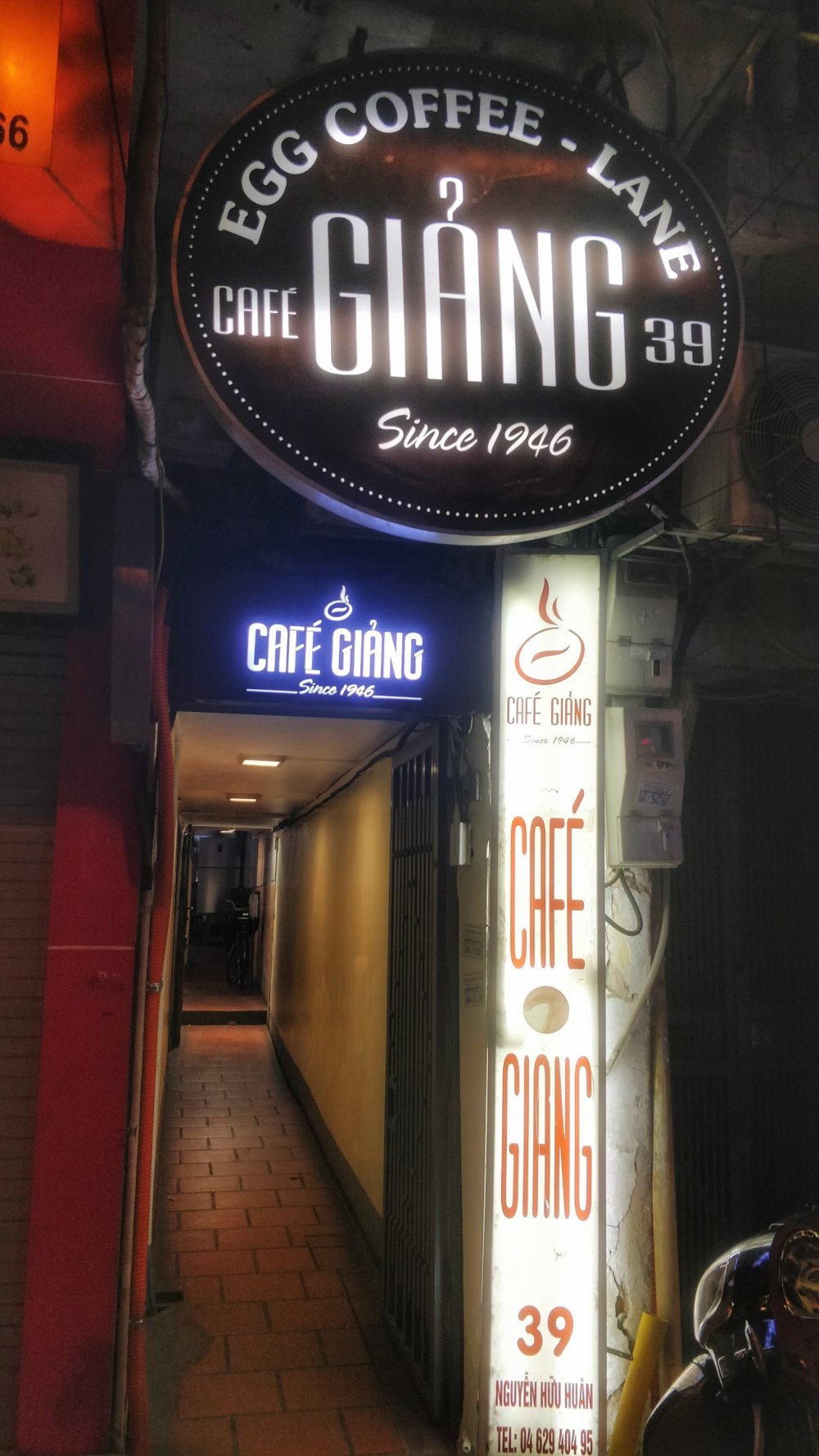 The drink was supposedly invented by the café’s founder in the 1950’s. The son of the founder says his father was inspired to make up the recipe as milk was scarce in Vietnam and they were replacing milk with egg yolk. 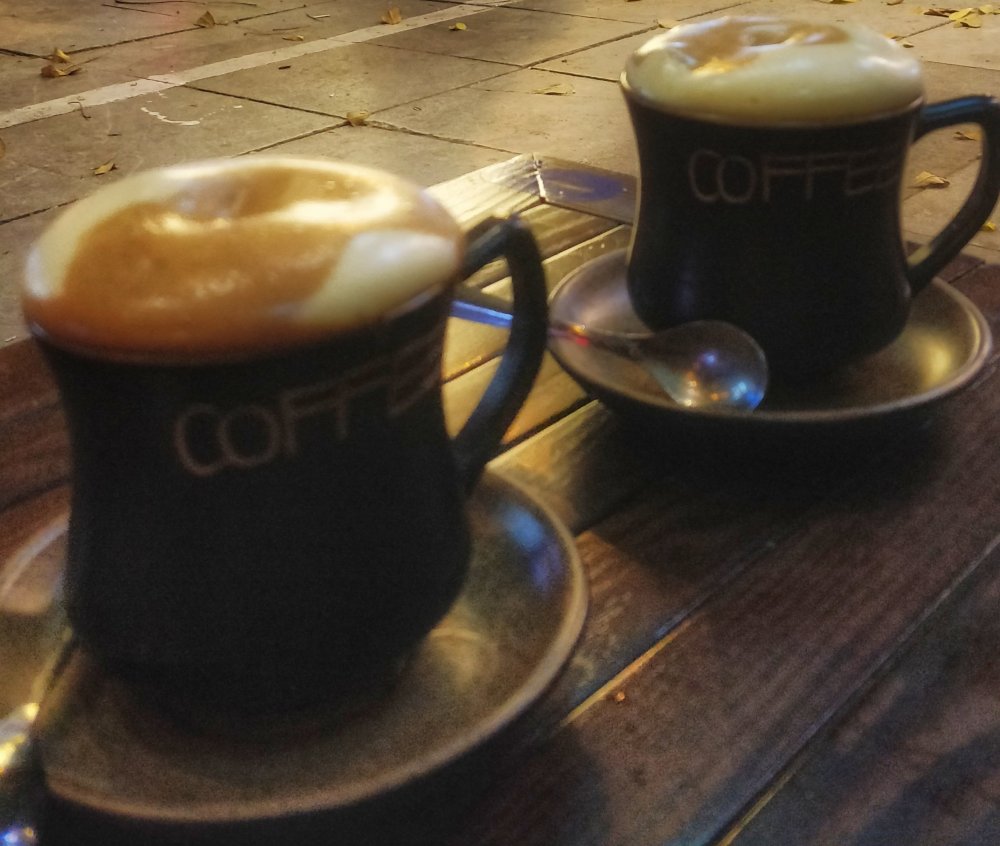 I love egg – scrambled, fried, poached, omlette, you name it I love it….in coffee though, well that’s a different matter!

Andy told me I was over thinking it…what was there to over think I had egg in coffee and it tasted eggy – simple as!

I ATE the top half of the coffee as it was too thick to drink and once I ate this eggy textured topping I was then able to drink a super strong black tasting coffee at the bottom and it blew my head off!

With the head buzzing it was time to haggle with the locals and collect some souvenirs!