Although I don’t really thrive in the months of January and February (I find them long and gloomy), there is a little something about the beginning of a new year that excites and invigorates me and I begin to feel the fire in my belly starting to ignite again at the thought of new travels and new destinations….where in the world to next!

And so the planning begins.

This year is going to be another ‘one long great adventure’.  And where better to start those journeys than from here where I call home, my beautiful Scotland.

This weekend we are up in the Highlands in Scotland.  It feels good to escape from the hustle and bustle of what has been a busy few weeks.

And we have a new toy which comes in the form of a new lens for our camera.

Practice makes perfect and this year we hope to capture the most amazing skylines, especially the night sky, stars, moon, sunsets, sunrises….space amazes me, I love the vastness of it all…it boggles my mind.

We have witnessed some of the most amazing skies on our adventures from being in complete and utter darkness in the Himalayas whilst climbing to Everest Base Camp, to sleeping under the Milky Way every night in Russia whilst climbing Mount Elbrus and then there was of course the magnificent Aurora Borealis in Iceland…the pictures all engraved in our memories as at that time we didn’t have a lens to capture such wonders.

So on arriving in Aviemore in the evening we visited Loch Morlich to begin capturing a sky full of stars.

Tonight was a clear sky kind of evening. However there was high winds which made conditions feel like -10.  But -10 conditions meant no-one was around.

We were consumed by darkness, completely alone, on a beach in freezing conditions  with a sky full of diamonds and it was perfect.  And I saw my first shooting star in a long time, it felt magical.

Capturing  these night skies in complete darkness is actually harder than it looks or reads…but we promise to improve and hopefully along the way our pictures will get better and better.

Today we were going to undertake the Corbett of Meall à Bhuachaille situated 20km east of Aviemore to the North of Loch Morlich and Glenmore Forest.

This walk is pretty accessible with a straightforward ascent and descent. 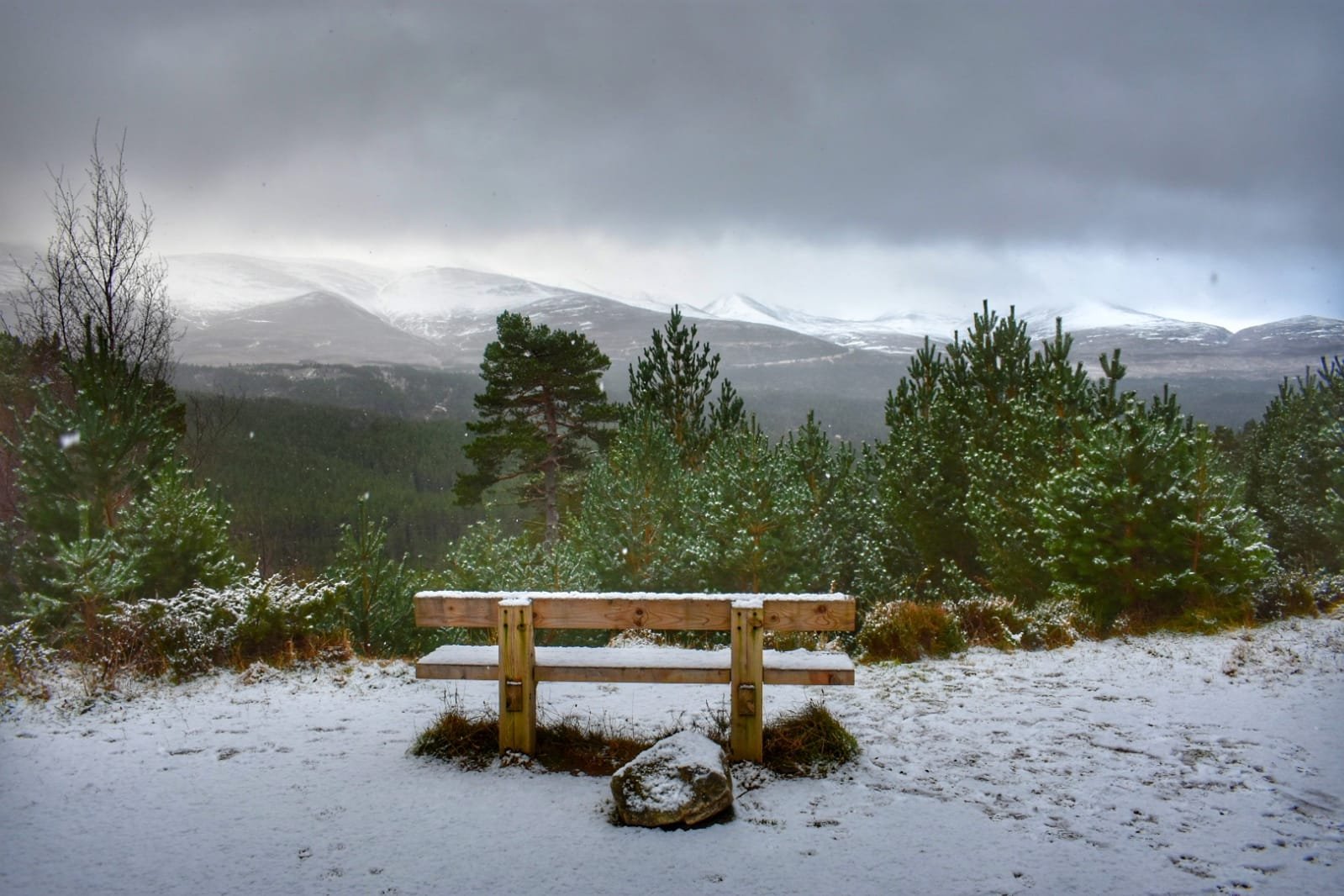 So although this is not a Munro it’s still high enough to test out the legs and dust of the cobwebs.  A great walk for our first hillwalk of the new year in the Cairngorms. 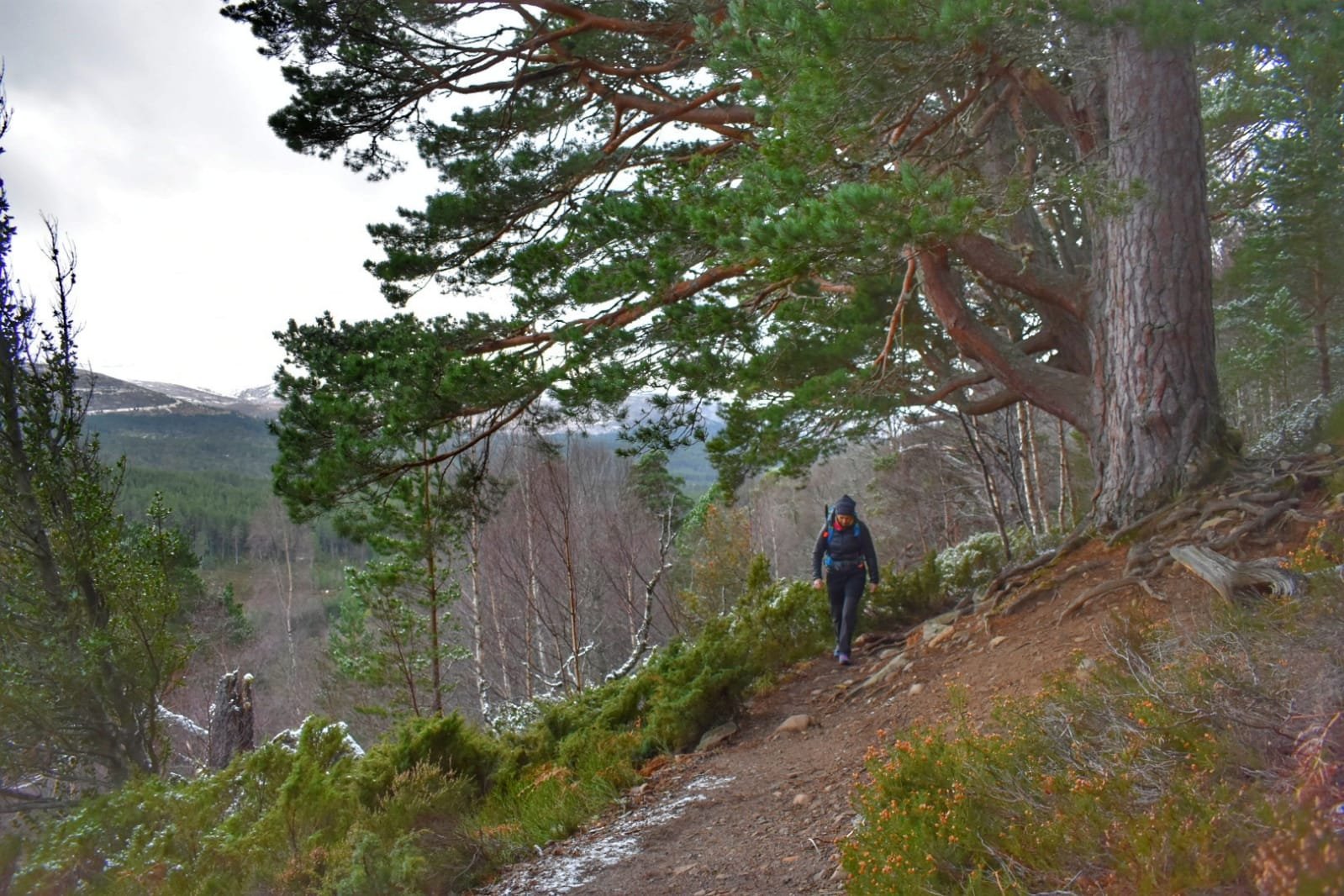 We park the car near Glenmore visitor centre and head off.

We pass by An Lochain Uaine (The Green Lochan) and as always she is spectacular.

The path pretty much climbs steeply up all the way from Ryvoan Bothy.  This bothy is pretty special and its position is quite idyllic.

Mountains soar around the stone shelter while long distant paths stretch of in the distance to the Cairngorms.

Today’s weather provided us with clear views, a sprinkling of snow covered the ground and as we walked it snowed lightly.

As we got nearer the top we were hit with a cold bitter wind but the views were great.

We had expansive views in all directions with the Munro’s of the Cairngorms in full view.

We had the most wonderful rugged panorama.

The large summit cairn provided us with some protection against the bitter cold wind and we quickly layered up. 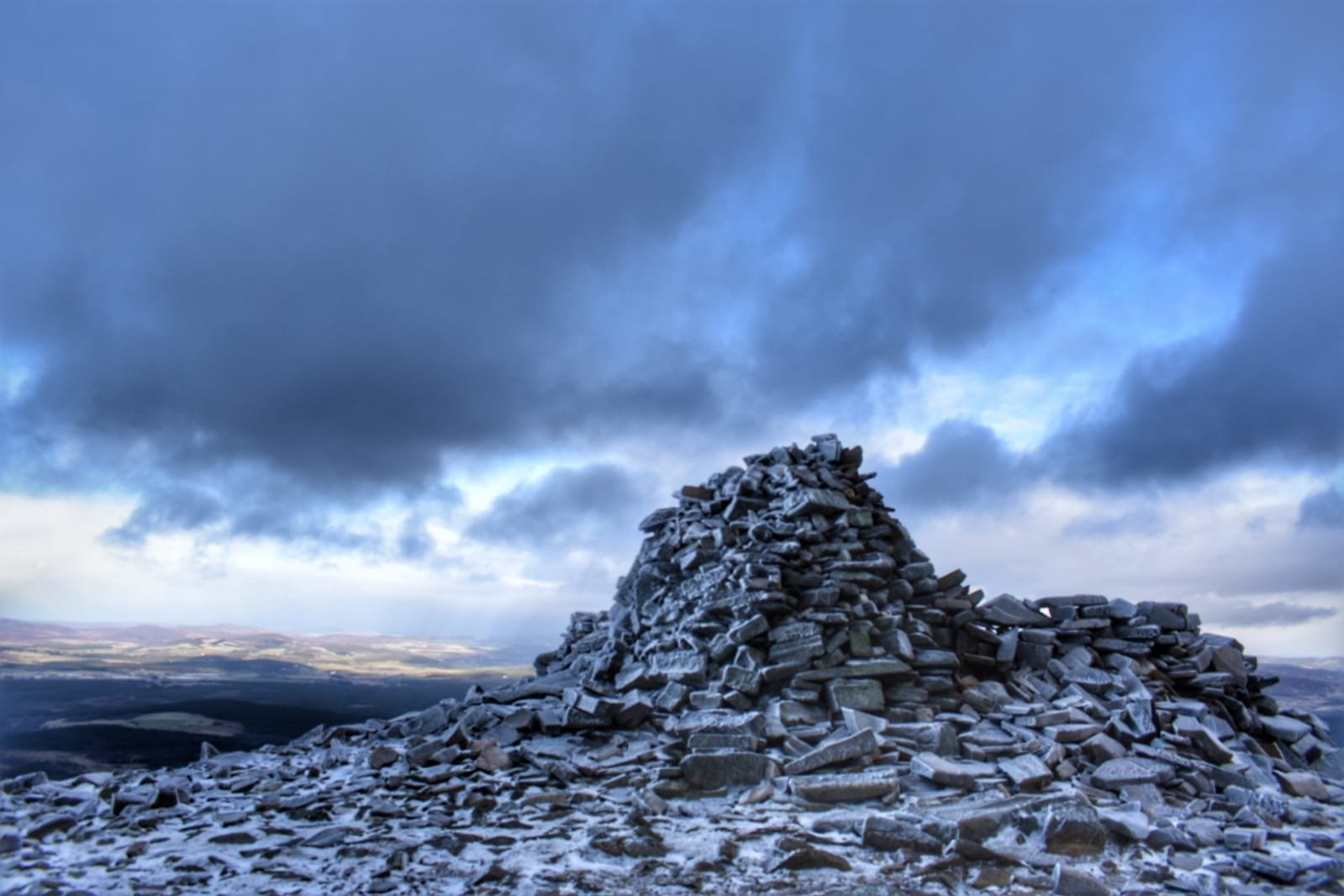 It was lovely seeing the hills covered in snow and we experienced the beauty and wilderness of the Cairngorms without the length and remoteness of undertaking some of the Munro’s we usually do.

We had views over the forests of Rothiemurchus and saw Loch Morlich nestled within the pinewoods. 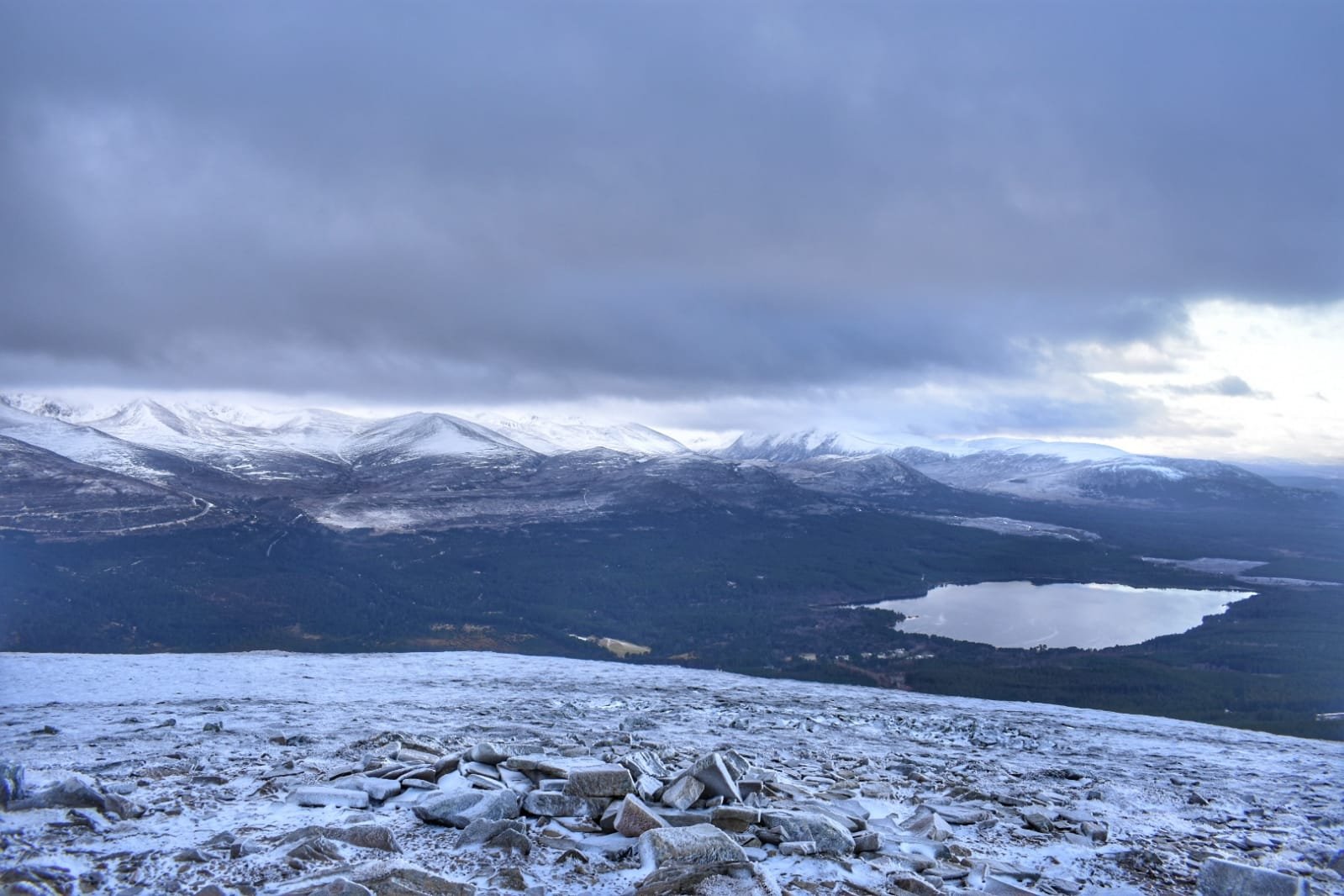 It was extremely cold so we quickly made our way back down.

So with night-time photography comes night-time hikes and as if we hadn’t hiked enough today we were back out come darkness with a camera in hand and head torches on.

We were undertaking an approximate 2 hour hike (that’s what the write up said but we done it much quicker) heading up Lady Hill to the Duke of Gordon’s Monument.

Everytime we have visited Aviemore we have saw this monument in the distance from the car as it is visible for miles around but we had never hiked up to it so tonight was the night.

On the way up we passed by the Waterloo Cairn which was tucked away in the forest.

This was erected by the Marquis of Huntley in 1815 in memory of the officers and soldiers in the Gordon Highlanders and Royal Regiment who fell at The Battle of Waterloo in June 1815.

From here we hiked up another short distance to the Duke of Gordon Monument a massive pillar of stone with a viewpoint over Strathspey.

But what was more impressive was another bright and beautiful starlight sky and there she was….the Milky Way….not as bright as when we were in Russia but there all the same.

We stayed here for ages as it was a calm night.

And as if it’s just a normal every night occurance we saw another two shooting stars one of which we captured on camera…wow…three shooting stars in two nights!!! 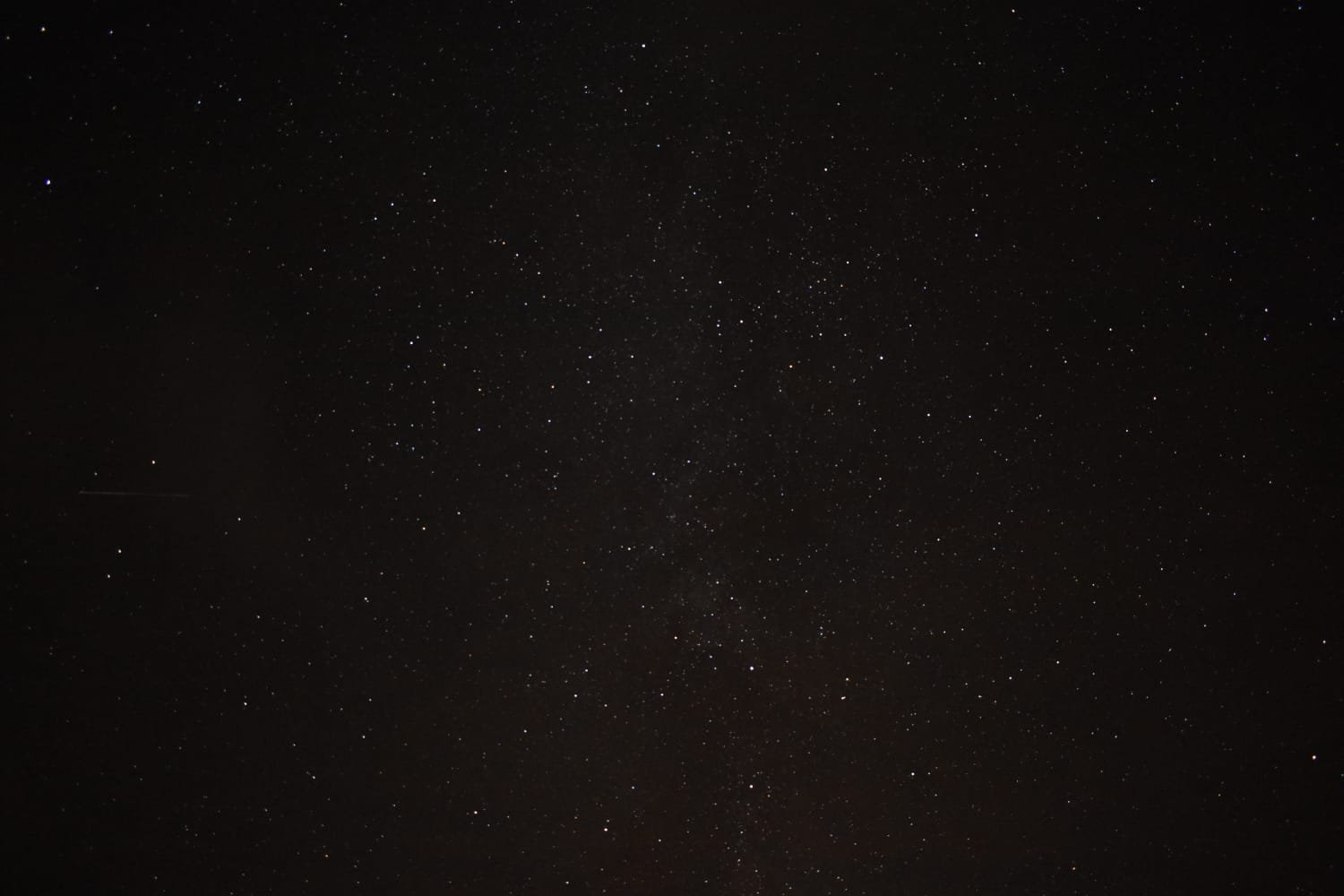 Completely satisfied we headed back down.

Before heading home we decided to undertake one last walk.

From one of the coffee shops we usually visit whilst in Aviemore I always admire the window view of a rugged looking ridge.

After sitting in this coffee shop last night after our walk I was once again admiring the ridge and thought I wonder what’s up there.

So today we were heading to Craigellachie, a nature reserve with several lochins, beautiful birchwoods, steep crags and hopefully stunning views…and to see the top of that ridge I’ve admired for many years.

The walk up was fairly steep in places and nearer the top it became treacherously icy and hideously windy but overall it was pretty enjoyable.

Once on top we got great views over Aviemore and enjoyed superb views of the Cairngorms. 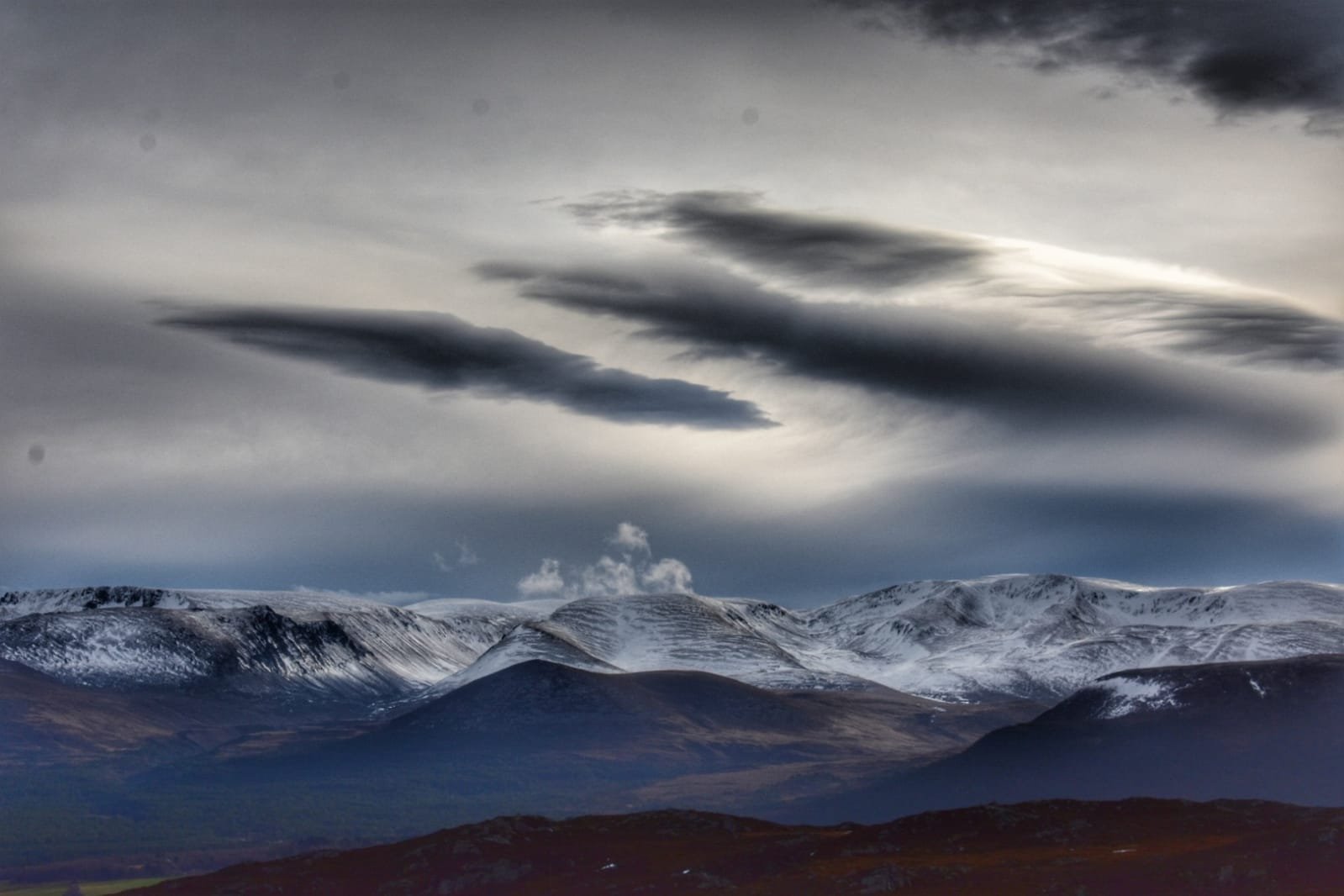 Finishing off our weekend, on reaching home we were welcomed by the most amazing sunset over the forest.