Last night an unexpected accident happened outside our tea house. A guy approximately 45ish from a different trekking party to ours went outside after dinner in the dark, tripped over a rock and fell of a pretty large ledge outside our tea house breaking his two legs! The poor man had to lie in the tea house all night for well over 12 hours with no morphine until a helicopter could get in (visibility was poor late last night). For that man and his son the journey had ended…how sad.

So after a pretty good sleep (feel bad saying that after the above), it was time to get up again…same routine, different place.

Today we were trekking from Namche Bazaar to Tengboche which will be our highest altitude point of the day before we drop down to Debuche – same old, same same old – climb high, sleep low. 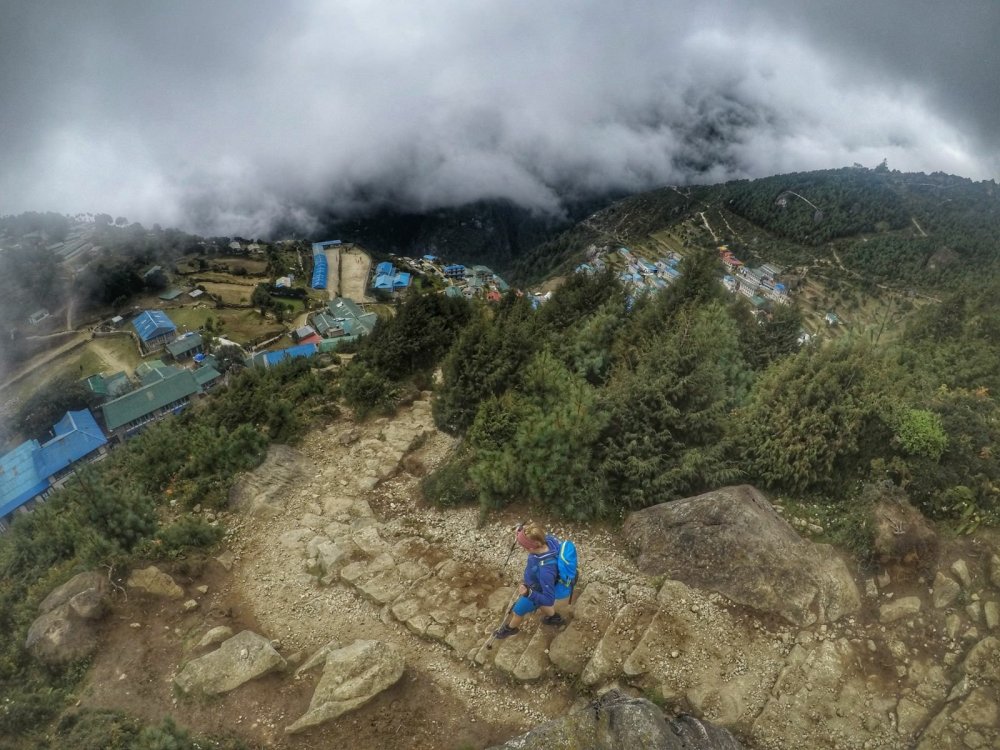 We continued along the rushing glacial waters of the Dudh Kosi, cloud low again today so although we saw many mountains we couldn’t see the huge peaks.

The route was fairly level for the first three hours with reasonable up and downs. It was surprising and I guess a little bit of a treat to look ahead and see a reasonably flat trail ahead as we clung around the sides of the mountains. 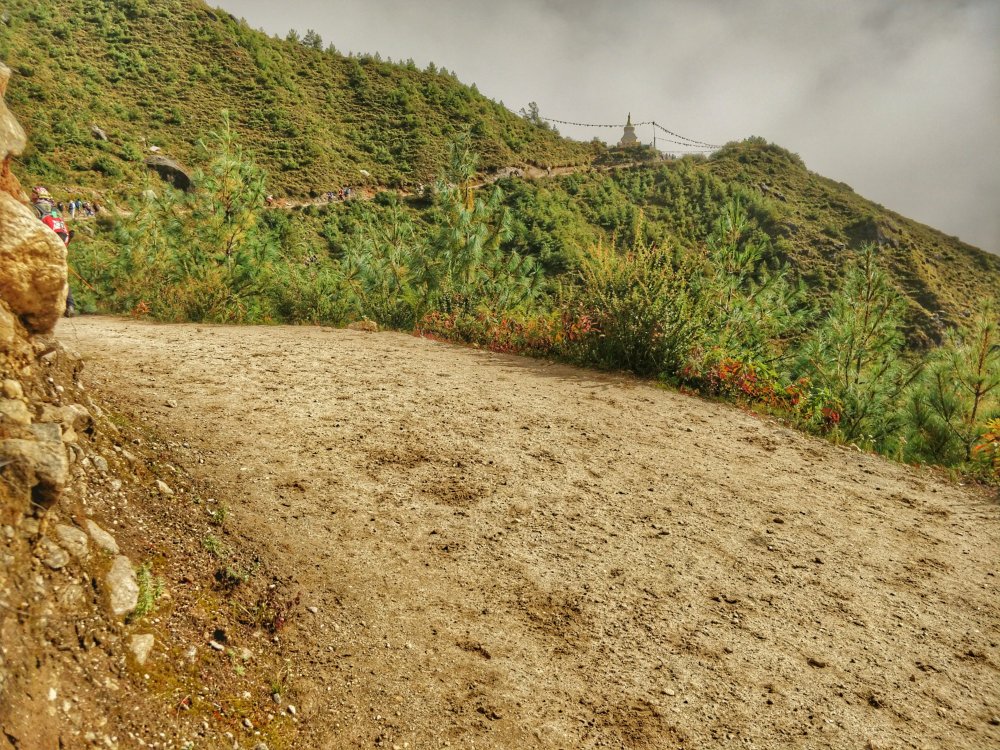 This path was also one of the best paths we had been on, you could at least lift your head without tripping up.

Our guide BK told us that a local man started work on this trail 10 years ago, he was now 79 years old and still continues to work on it. Sure enough as we moved forward there he was. Everyday in this amazing land something touches your heart and its not just the mountains…these people are truly inspiring! 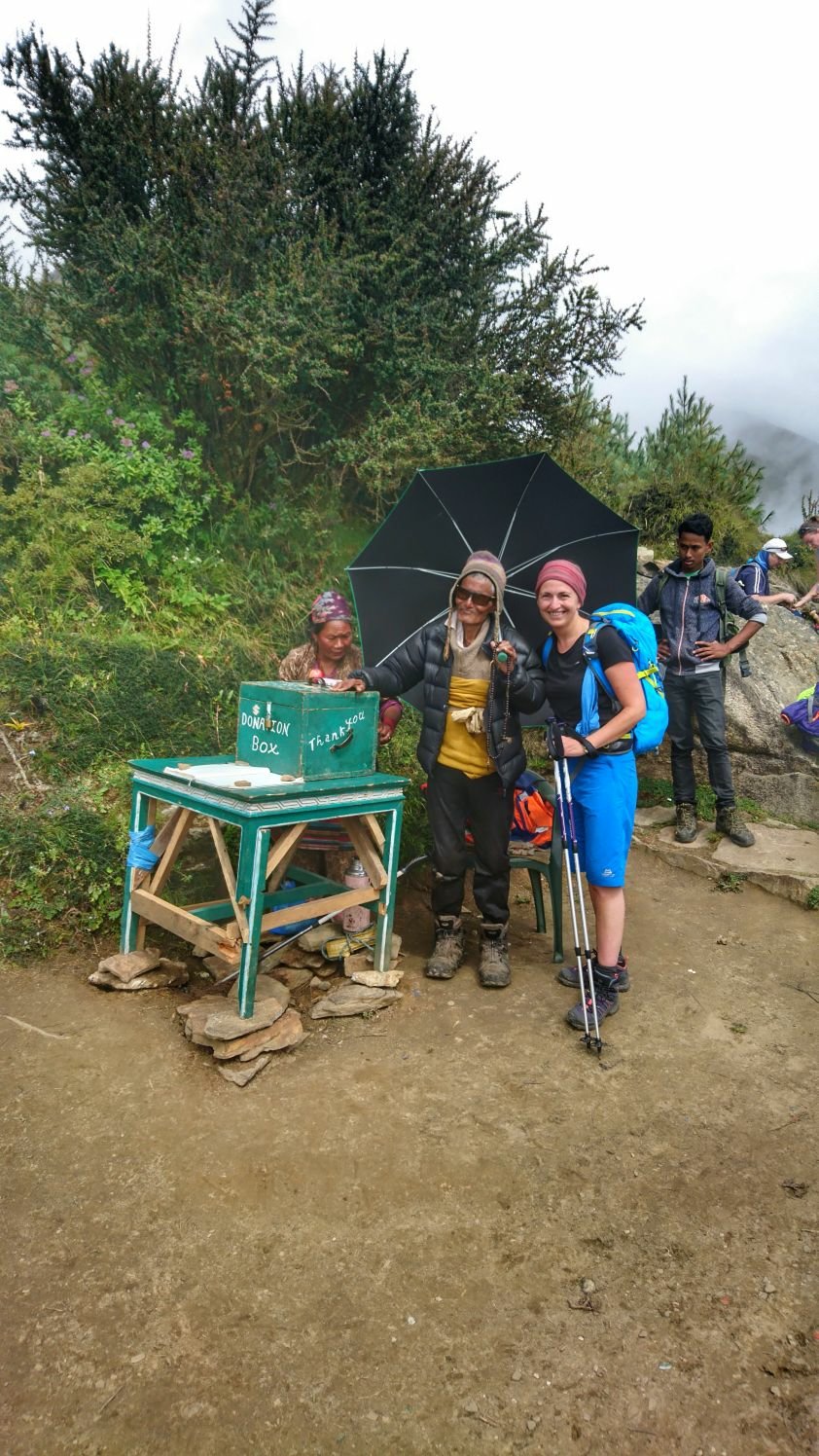 Suddenly the clouds opened up and there was Lhotse, the 4th highest mountain in the world, standing before us. 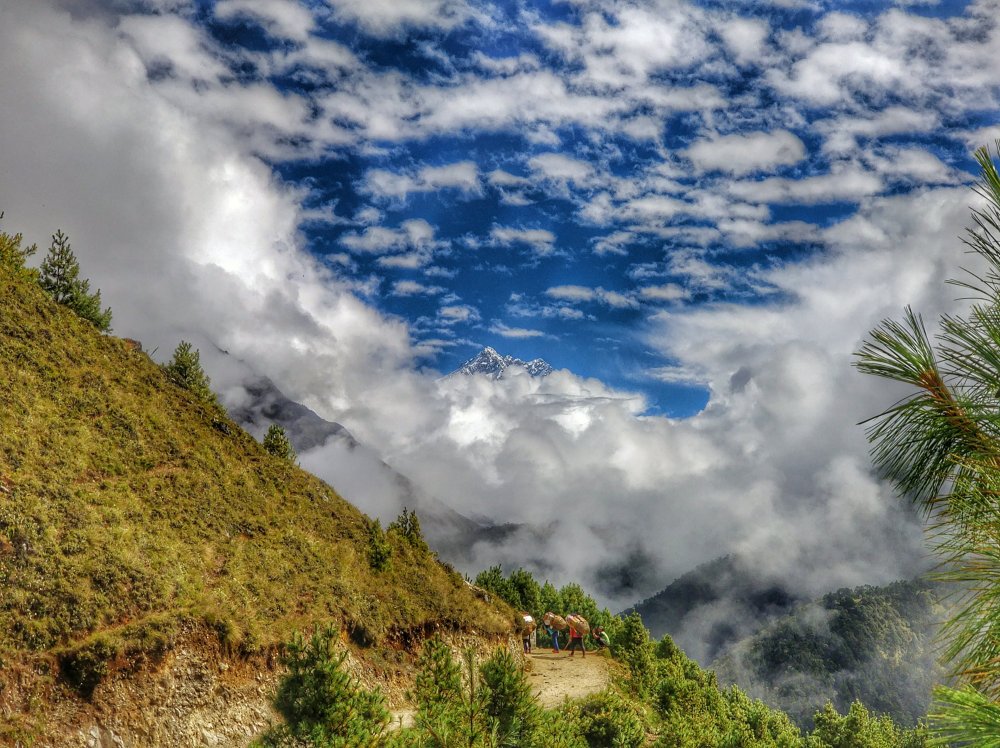 She was redicoulosly massive, words cannot describe her, photos cannot do her justice. I was speechless and could have sat there all day taking in her beauty….it was quite special.

We were told Everest was actually just next to her but we could not see for cloud… another day she continues to tease us…we had to move on.

As we walked we saw many a yak train – these are massive cows which live in high altitude – they are truly beautiful creatures. Although when you hear them coming your way, they all wear bells around their necks for this purpose, you quickly move to the inside of the track and let them pass. 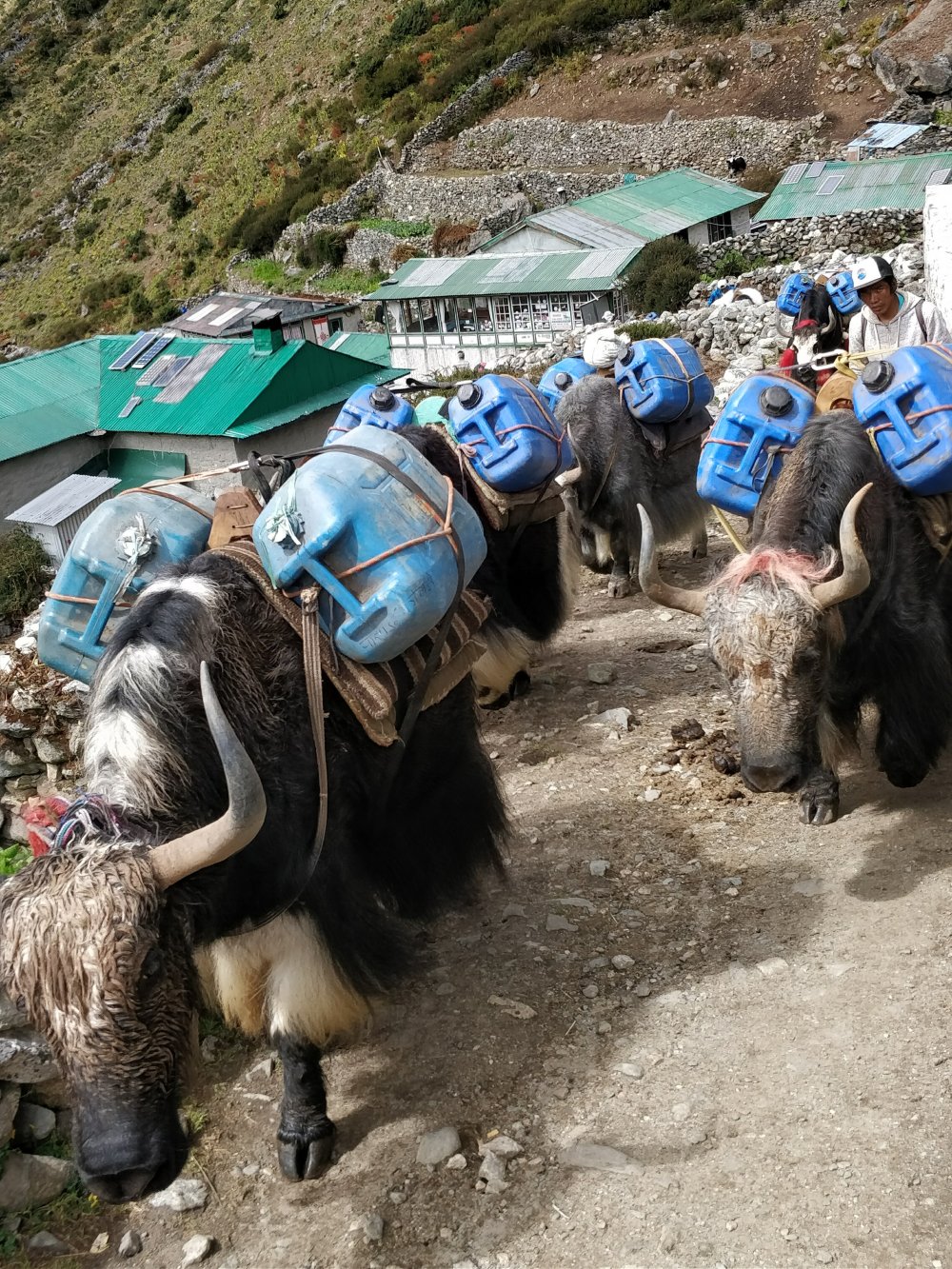 The trail then began to drop down to Phunki Thanga right at the bottom of the valley where a bridge crosses the Dudh Kosi, this was our 2.5/3hr mark. When you drop down like this though your first thought is… we have to climb back out of here!!! 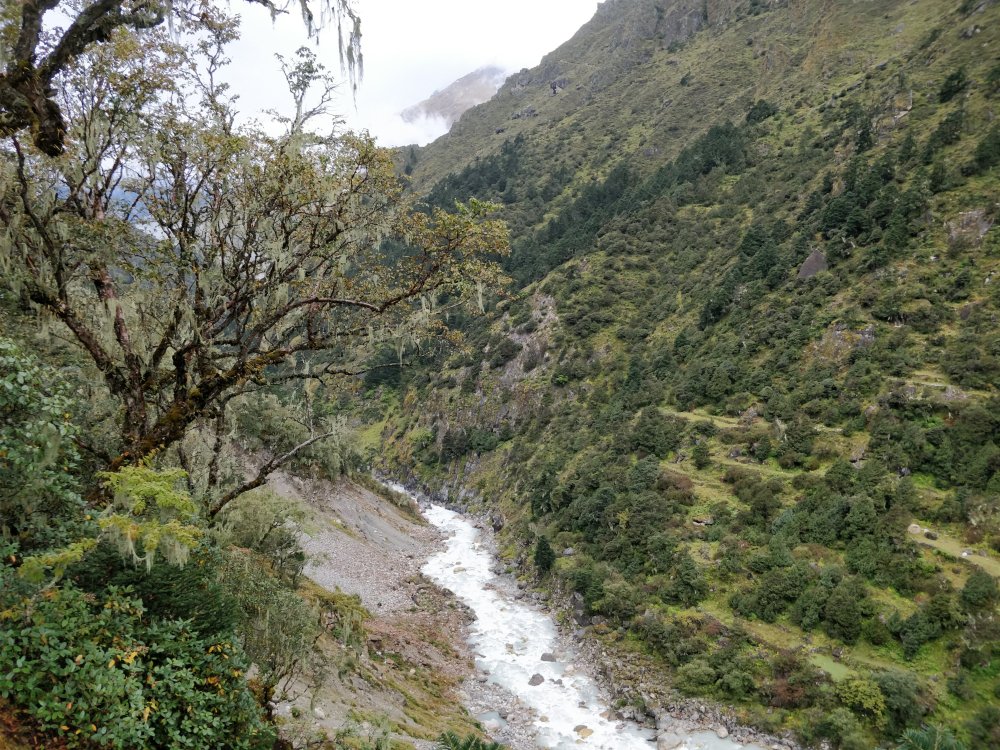 We rested next to the Dudh Kosi which was a beautiful spot and had lunch in Paradise – a small tea house – but actually paradise it felt like!

After the break we crossed the bridge and the real stuff began – we had to ascend 550 metres to reach Tengboche. It was a long hard climb.

You can now feel the difference in the air and breathing is becoming heavier. It’s just a case of focussing your mind, staying in the moment and being grateful your in the Himalayas… even if your knackered! 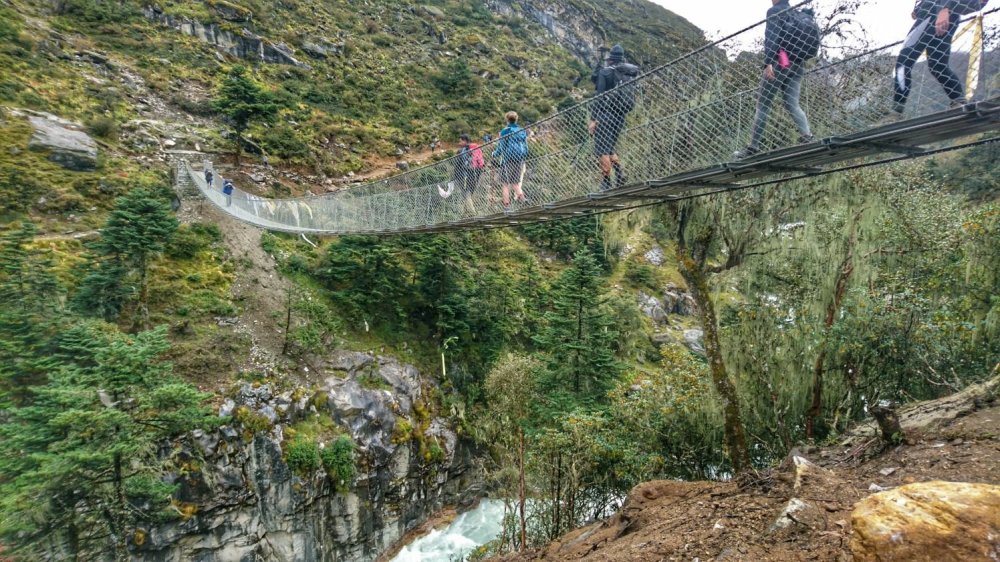 We reached the top, we were in Tengboche. Here we visited the Tengboche Monestery. The old Monestery had been built back in 1916 by Lama Gulu but the 2015 earthquake destroyed it and it had to be rebuilt.

This is a truly authentic Buddhist monastery and the largest within the Khumba region. Inside the monestery are incredible ornate wall hangings, a 6m Sculpture of Buddha and the musical instruments and robes of the lamas. The place was vibrant with colour. 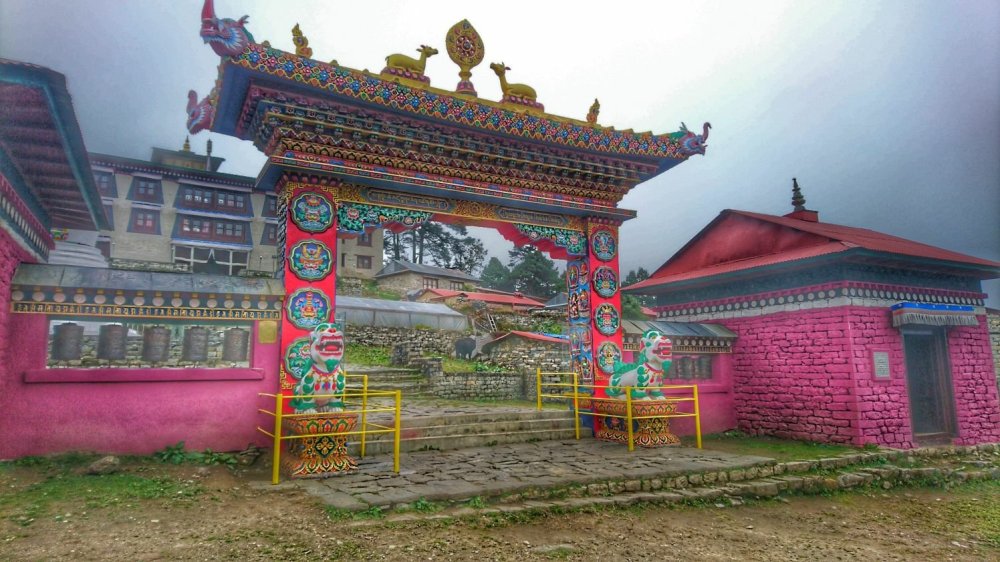 At 3pm the Monks began to chant. Sitting along the wall on the floor I took it all in and enjoyed the feelings of peacefulness and tranquility, I found it to be uplifting (sorry no photos were allowed to be taken inside).

Afterwards we began our decent to Debuche where we stayed for the night again in Paradise the tea house – but this time not quite paradise in fact far removed from it, as it was cold and damp apart from the dining area which had a log burning stove.

We gathered here for the rest of the night, had dinner and chatted, then before you knew it it was trekkers midnight – 9pm! Today we had walked for approximately 5 hrs 30 mins.