So today we were back to the ‘Munro Bagging’, to one of my favourite places in Scotland…the Glencoe area. 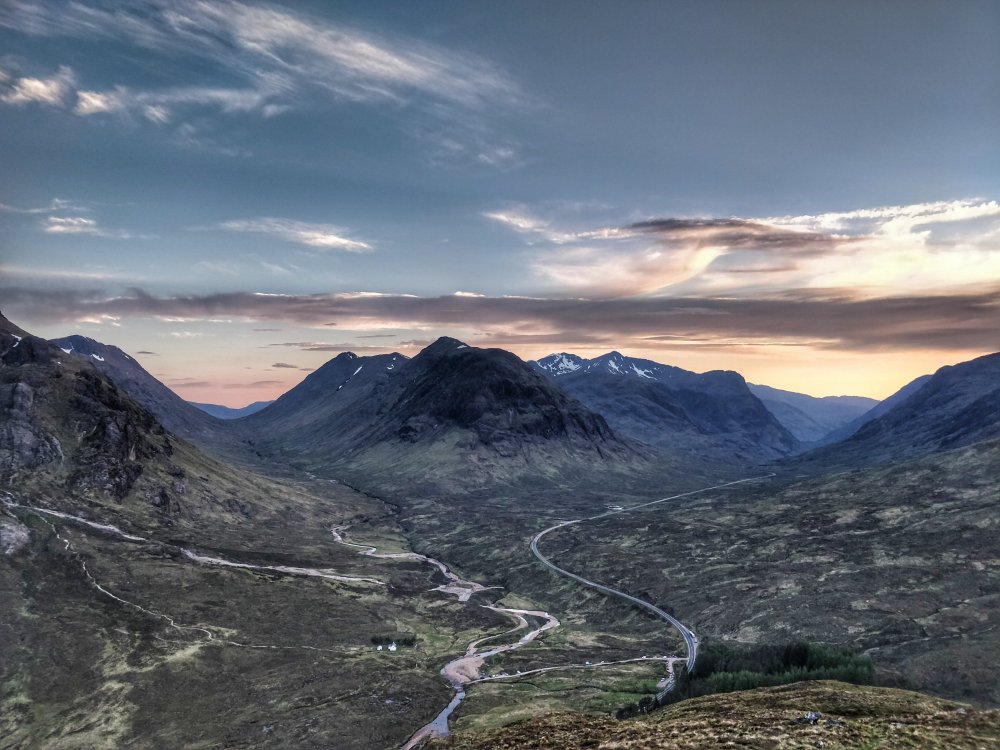 Weather we heard was to to be mighty fine, with temperatures reaching 22 degrees and summit temperatures stating 13 degrees…I don’t think I have ever summited a Munro in Scotland in 13 degrees heat!!! I’m an optimistic person but I’m not holding my breath with this one!

So off we went early Saturday morning as this Munro had quite a hike in to get to it. 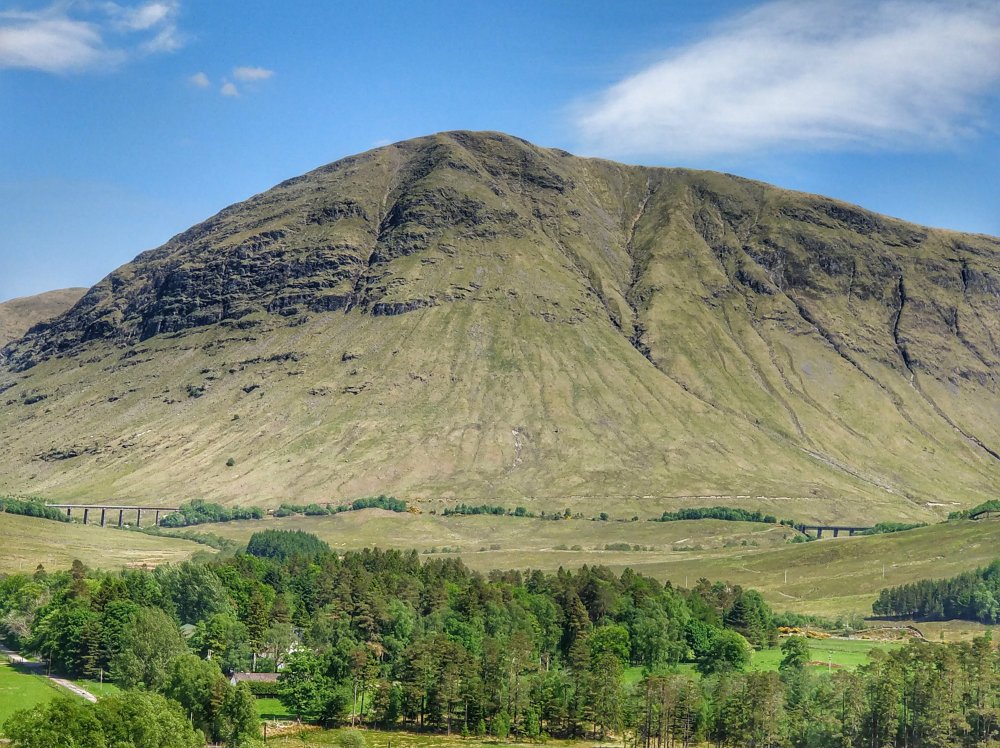 The drive up was stunning as the sun brought out the beauty in the landscapes as we passed through places like Lochearnhead and The Bridge Of Orchy area. 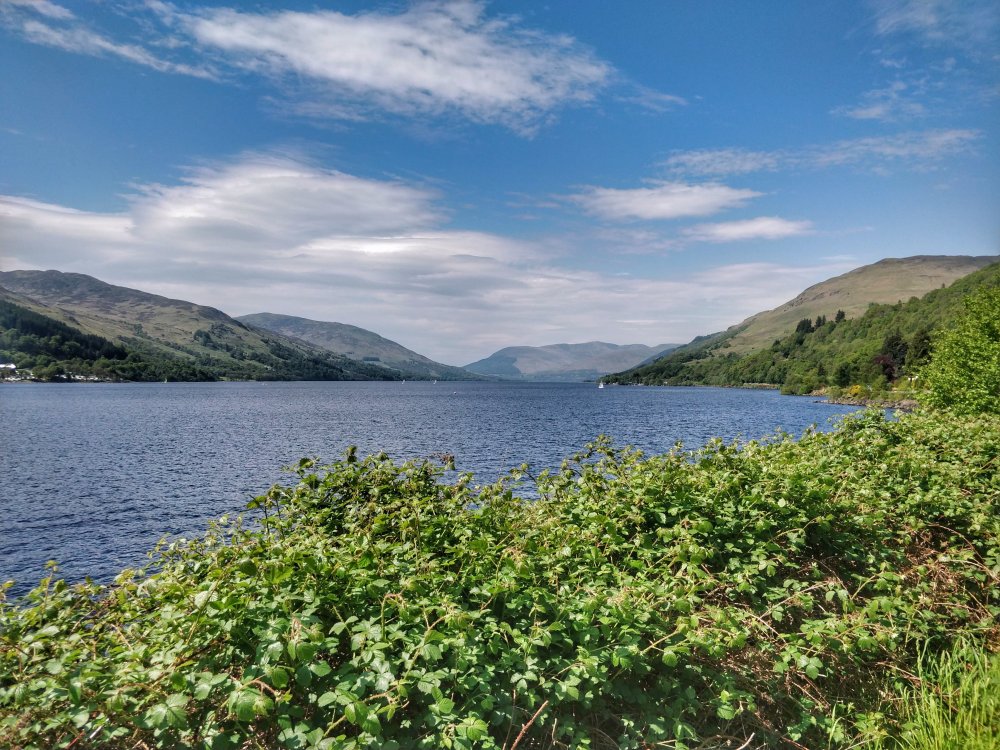 Once we reached the Glencoe area, our Munro for the day was Stob a’Choire Odhair.

This Munro is probably not well known by name but it is a familiar sight as the dome shaped mountain rising behind the lochs in the frequently photographed view across Rannoch Moor.

Most write ups about the mountain states that it’s a fine viewpoint for looking over the vast, wild emptiness of the moor.

So off we set. It’s great to be back in familiar territory as this is where we passed by when we did the West Highland Way walk hiking around the lower slopes on an old military road and walking along an ancient drovers’ road which used to herd cattle to market…when up here I am always aware of the history of what went before and can almost feel it’s presence.

We pass by a few day hikers and West Highland Way walkers and a part of me wished I was heading with them…I loved the walk into Glencoe and up and over the Devil’s Staircase which eventually took us to Kinlochleven. But not today, today we headed off track from them and up into the mountain ranges.

The hike in was a pretty long trek, but the sun was shining, and it felt nice to be trekking with T-shirt and shorts on and actually feeling the warmth, we enjoyed every minute. Well that’s up until the point that my right arm began to seriously play up! To cut a long story short I damaged tendons in the right shoulder about 16 weeks ago, had to get a steriod injection blah blah blah so carrying a rucksack up a Munro is probably not what the doctor recommended! After a few ibuprofen and a bit of a moan we plodded on. 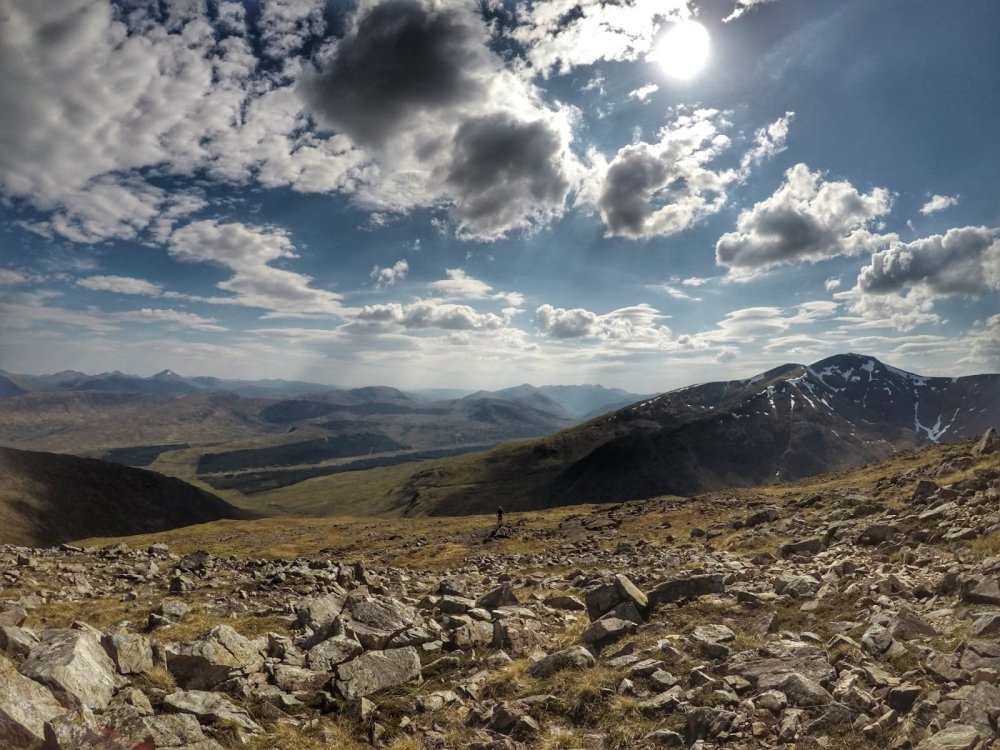 It was a bit of a steep hike up to what we thought was the summit but once we hit that we realised we still had another bit of a trek up.

And then we did reach the top, the views were all around, a 360 degree view of Glencoe and Rannoch Moor…wow! It’s when you get views like this, natural beauty at its best it makes it all worth while. The feeling is overwhelming and something I can not truly explain but its wonderful.

We stayed up top for quite a bit as temperatures were actually pretty good and well above 13 degrees, don’t laugh, this does not happen often to us on top of Munro’s, so I was taking full advantage of this amazing day and appreciating what was around…you can’t take this sort of stuff for granted! 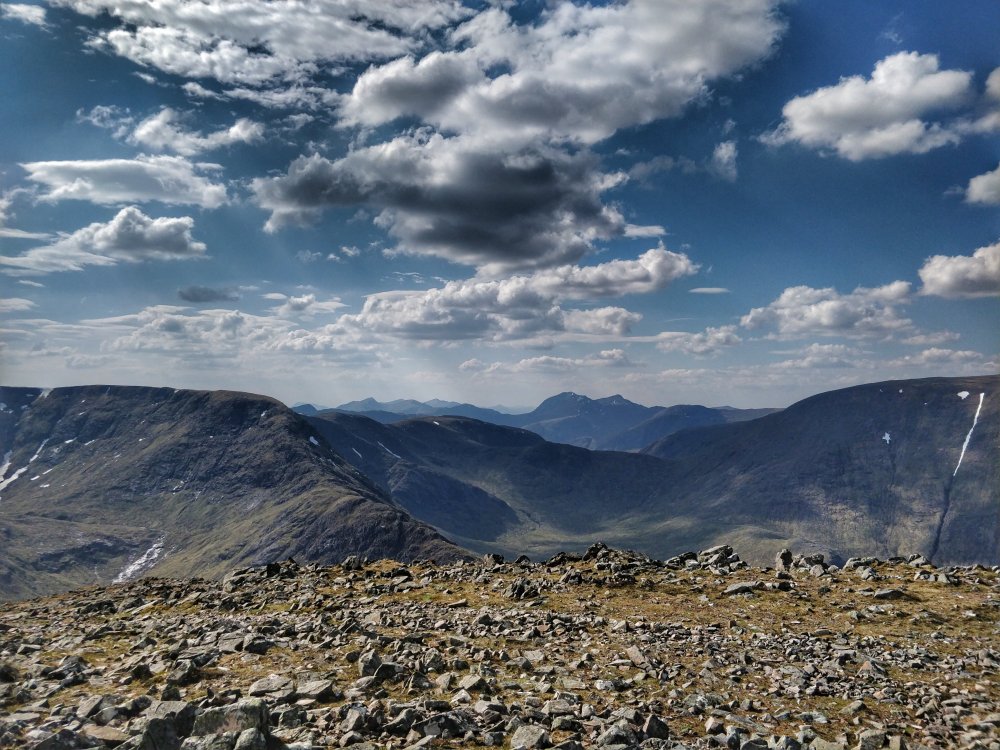 Then it was time to leave. On days like today I never want to leave the summit and can stay there all day in my own little world…I enjoy the peace, thinking time and of course the views but we had more plans ahead of us and we knew it was a long way out from here, so downwards we went. 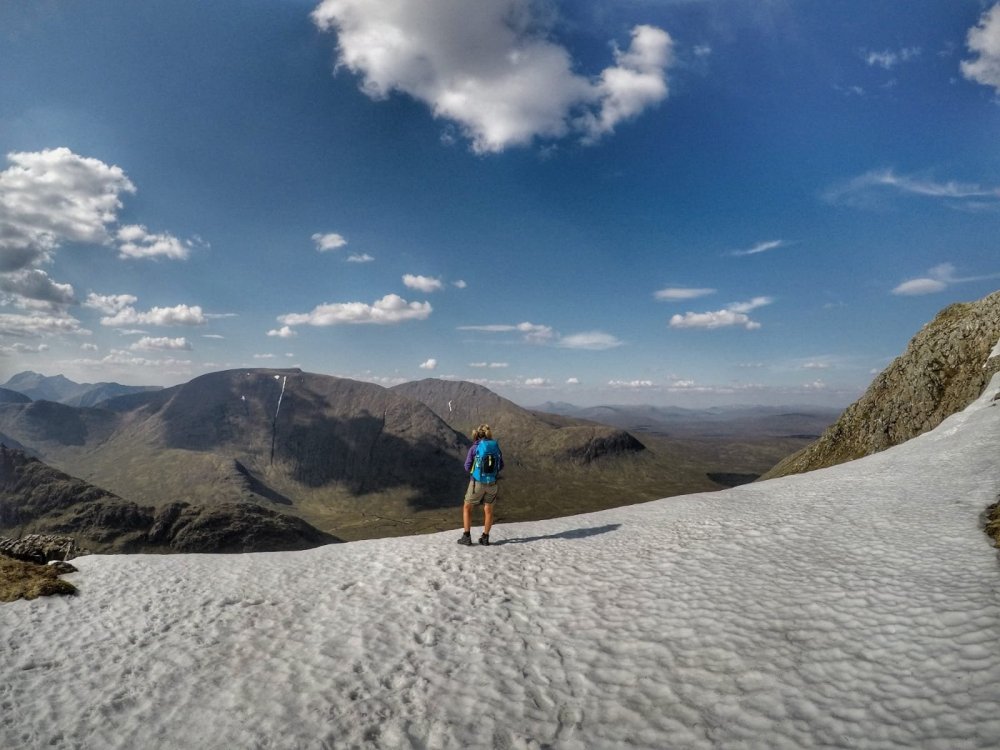 The walk was enjoyable, not too steep but it was a long walk and we never met a soul…ow apart from these two! 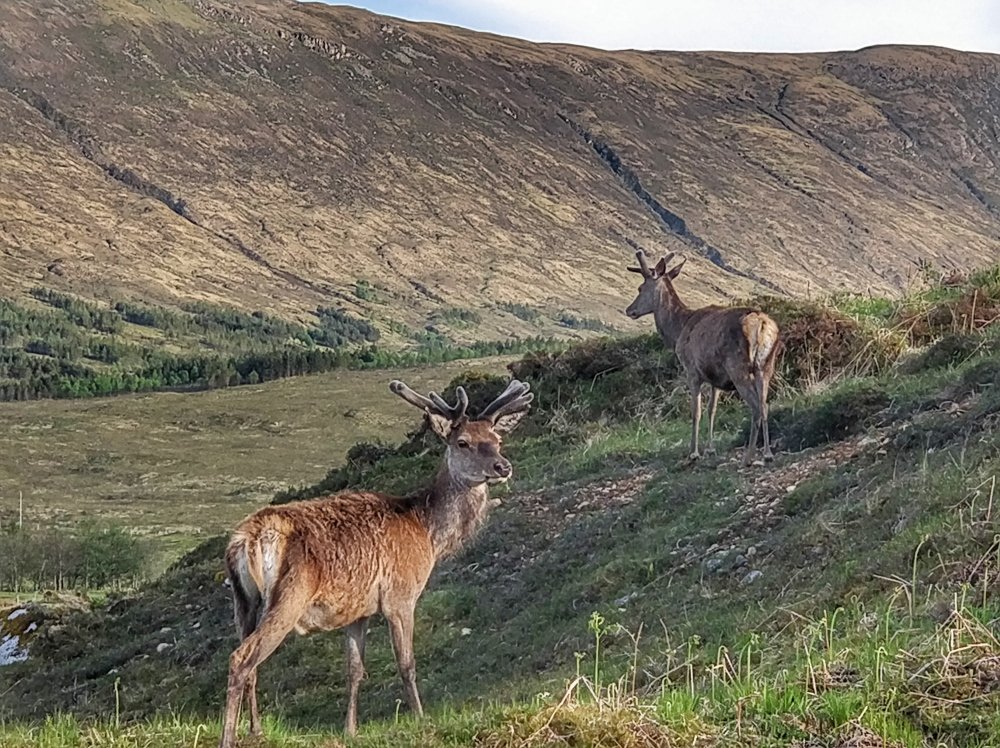 The evening remained lovely and eventually we were back at the car with another Munro done. But the night was not over!

So with all this excitement to be had, (Read: when the sun shines in Scotland we go a bit daft) we decided to not finish off our day here. Ow no…we were going to go wild camp for the night on top of another mountain under the stars…”why you ask”?…”because it’s there”?!

The idea was that we would wild camp on Beinn a’ Chrulaiste which is well seen when driving north on the A82 towards Glencoe, but it’s rounded, bulky outline goes unnoticed next to the magnificence of Buachaille Etive Mor more affectionately known as The Buachaille on the other side of the road. 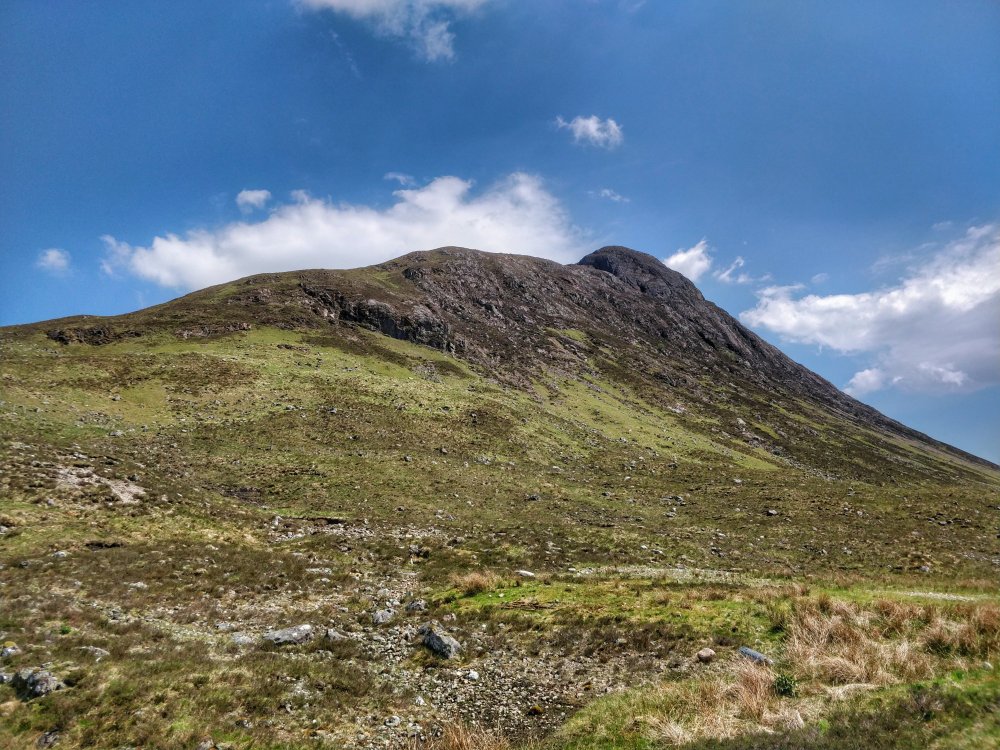 Yeah I must admit by the time we got back to the car at like 7.15pm, conversations did kind of sound like “so this is a bright idea”…you may realise by the tone that this wasn’t my bright idea!

But we went with the ‘bright idea’ and quickly threw everything in the car as we needed to drive another 30 minutes along the road, dump car, and hike up to our ‘view point”, set up tent and have tea…did I say it was 7.30pm in the evening already….and also that this was not my idea!!!

We ditched the car, and I carried what felt like a house on my back…with damaged tendons might I add..which I did add several times throughout our conversation heading up that mountain lol!!! The time was now 8.30pm, the original plan was to be all set up on top for sunset…once again we raced against the sun!

This mountain felt like a vertical accent, but slowly and upwards we went. I’m not going to lie but after our already long day this was a hard climb especially with the added weight of tent, rollmats, sleeping bags, food including food for the dog, cooking equipment, water etc etc… I think you get the idea don’t you?!?!

We reached the top, well not quite the top, more like the shoulder of the mountain but this was as far as we were going tonight given the time and how we were feeling.

We had an almost full 360 view of Glencoe, with an amazing viewpoint of its neighbour, The Buachaille. The panorama was outstanding in all directions…words and pictures will never do this justice.

We quickly set up our tent for the night as it was well after 9pm and we still had to cook dinner! But it was still light, the sun still had not set where we were standing.

Flat ‘whale like’ mountain in middle is Ben Nevis

This was going to be some sunset as skies were clear and we had the best seats in the house!

It was all we hoped it would be. 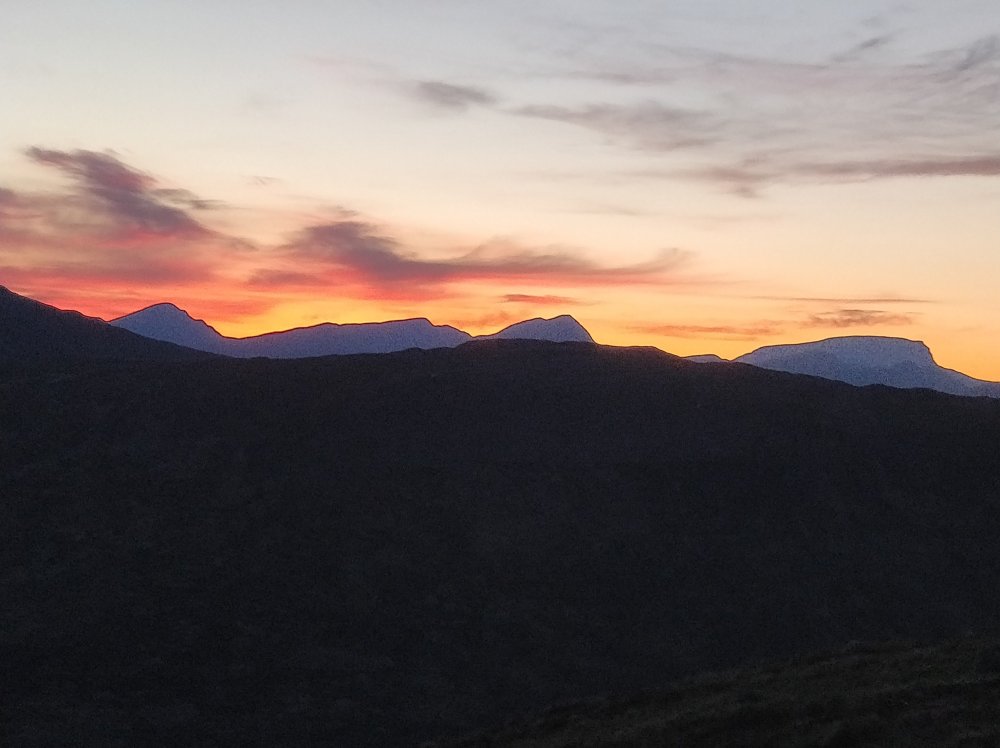 After a late dinner watching the sunset and continuing to take in the views we hiked another bit up the mountain. 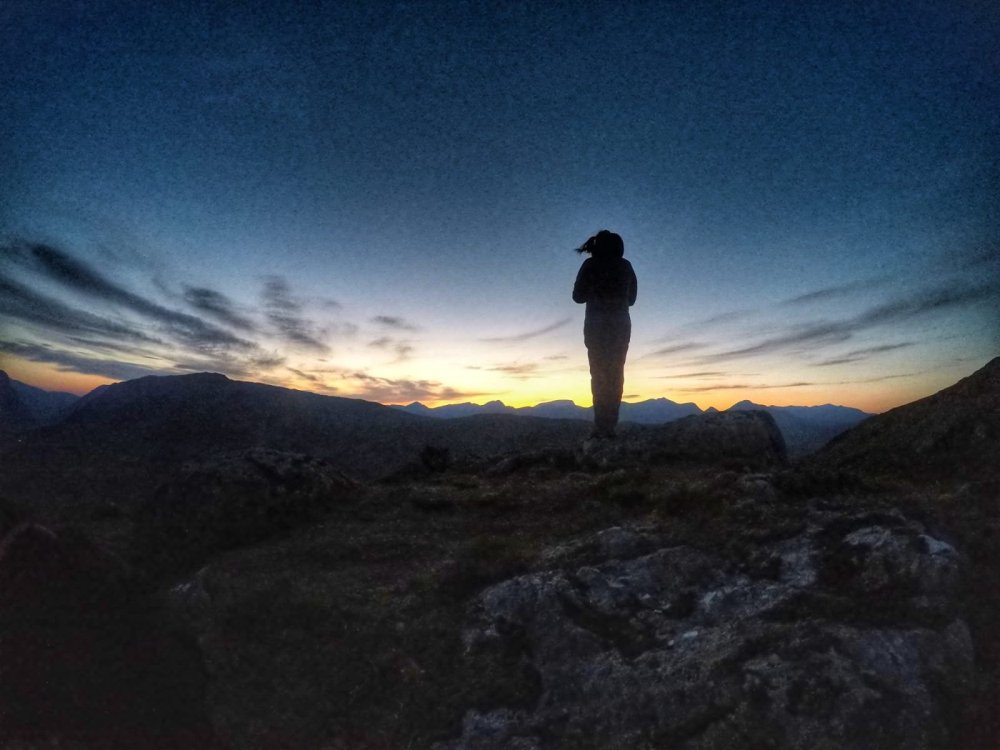 It was 11pm and still light. We had hoped for a dark sky full of stars but still the sky remained clear but with an amazing full moon.

You might wonder what’s there to do up there on top of a mountain at night….well this is how we filled in some of that time, children that we are…haaaa! 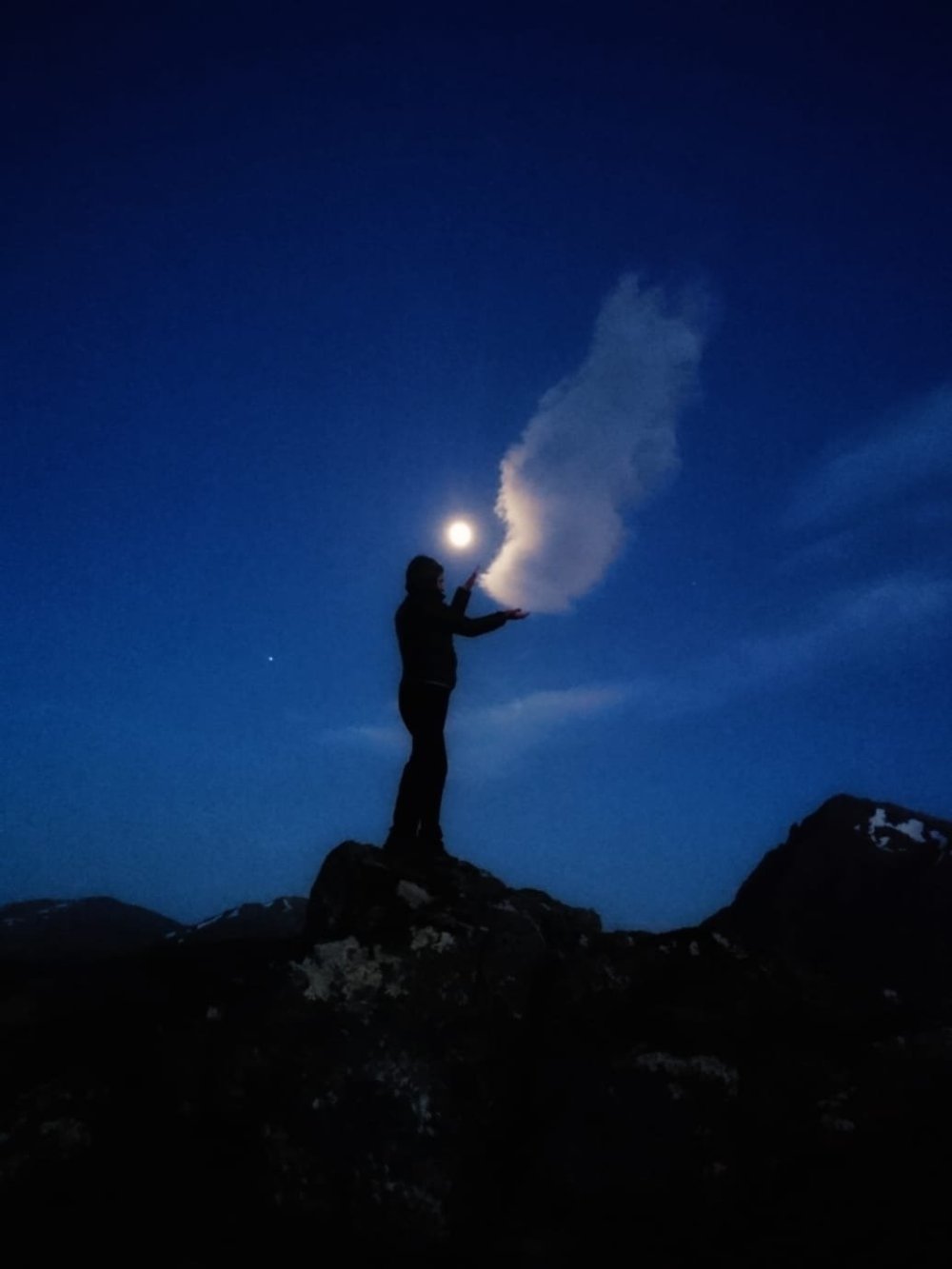 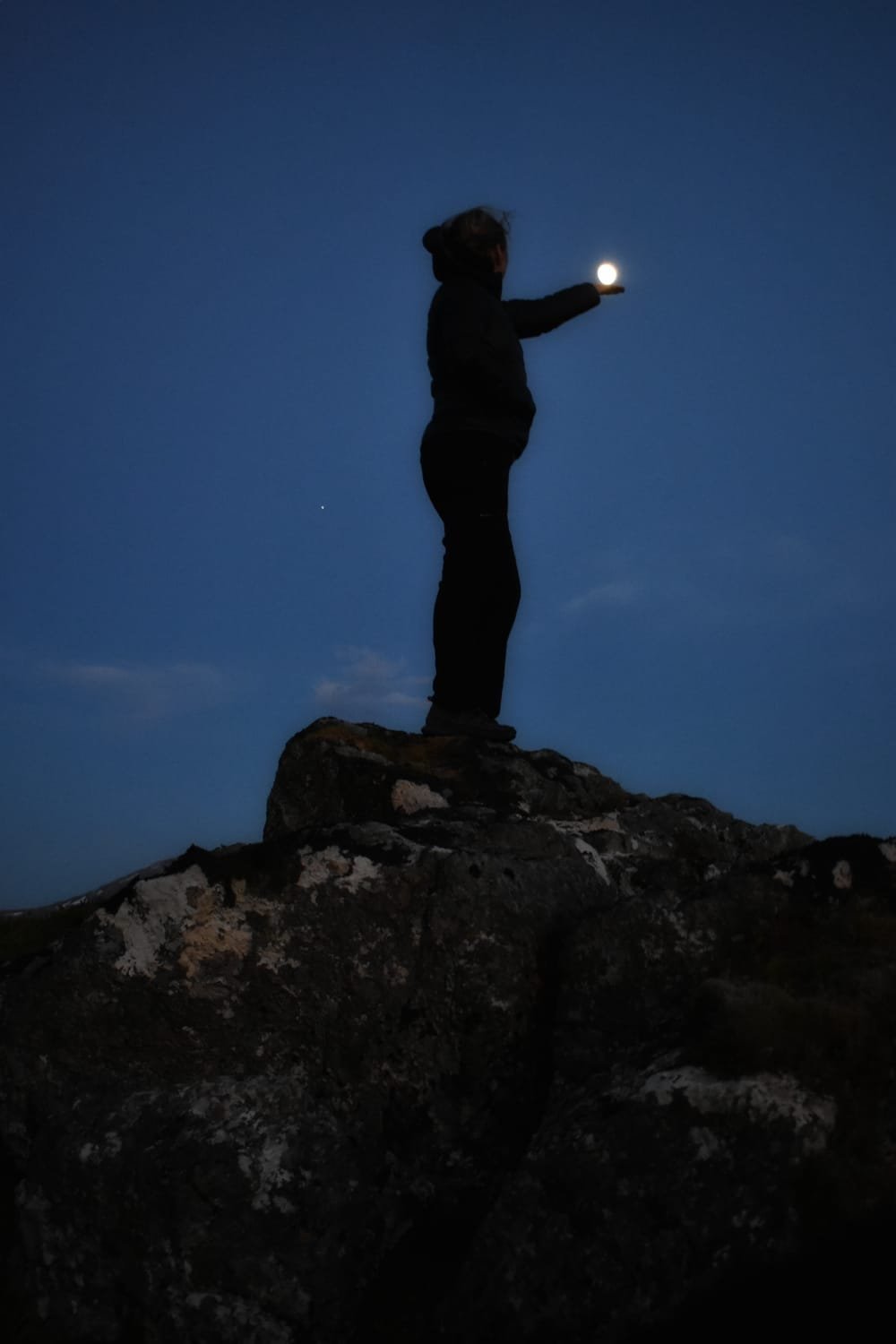 It was getting late, we felt very tired so we thought we’d head back to the tent, fall asleep for a bit, wake up to see the stars later on. We also wanted to see an amazing sunrise from the top. Next thing we knew it was 5am, we saw no stars and no sunrise we completely slept through it!!

Once we were up and ready and had breakfast we decided we would leave the tent where it was and hike up to the summit as views were meant to be amazing.

They lived up to all that we had read. A 360 degree clear view of the Glencoe Mountains…breathtakingly beautiful!

Back at the tent we packed up, headed downwards and had a picnic at the bottom of The Buachaille beside the river to finish of the trip.

Sometimes you don’t have to travel too far to see the beauty that’s at your fingertips or in this case footsteps…this is a prime example…you just need to open your eyes and walk.