So we catched the early morning bus to take us to El Chaltén.

The drive was pretty spectacular. A large open road right through the wilderness.

Wide open land on either side of us with mountains, glaciers, lakes, icebergs, all on show. 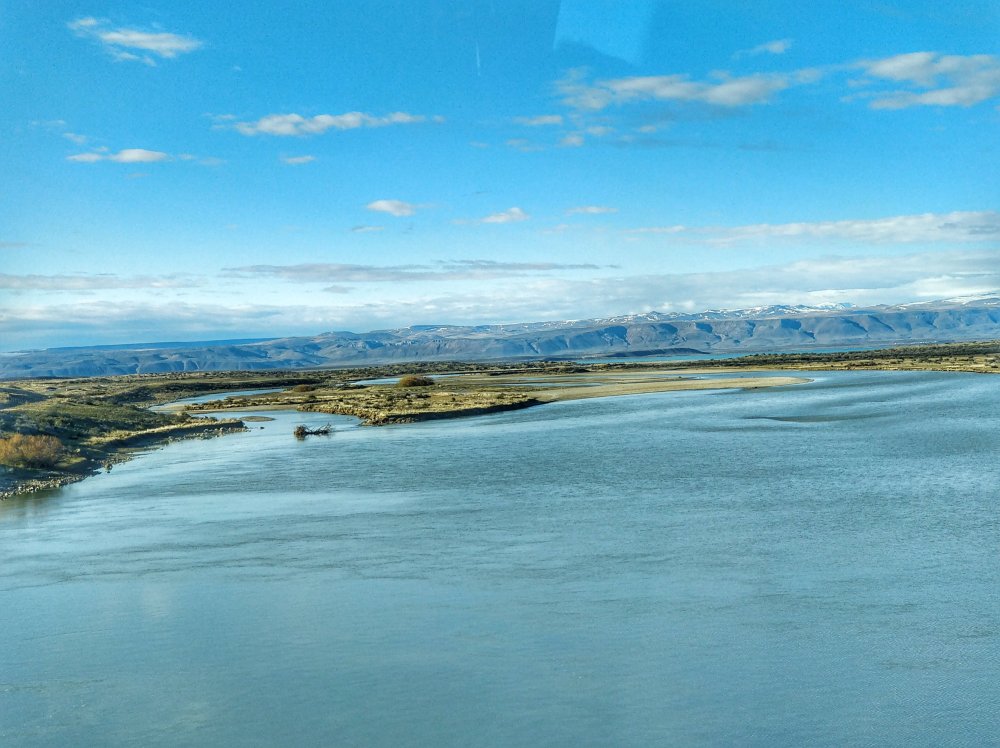 Contrasting colours in the landscape could be seen all around.

We were on the famous Ruta 40, Argentina’s longest road…and it’s a wow kind of road! 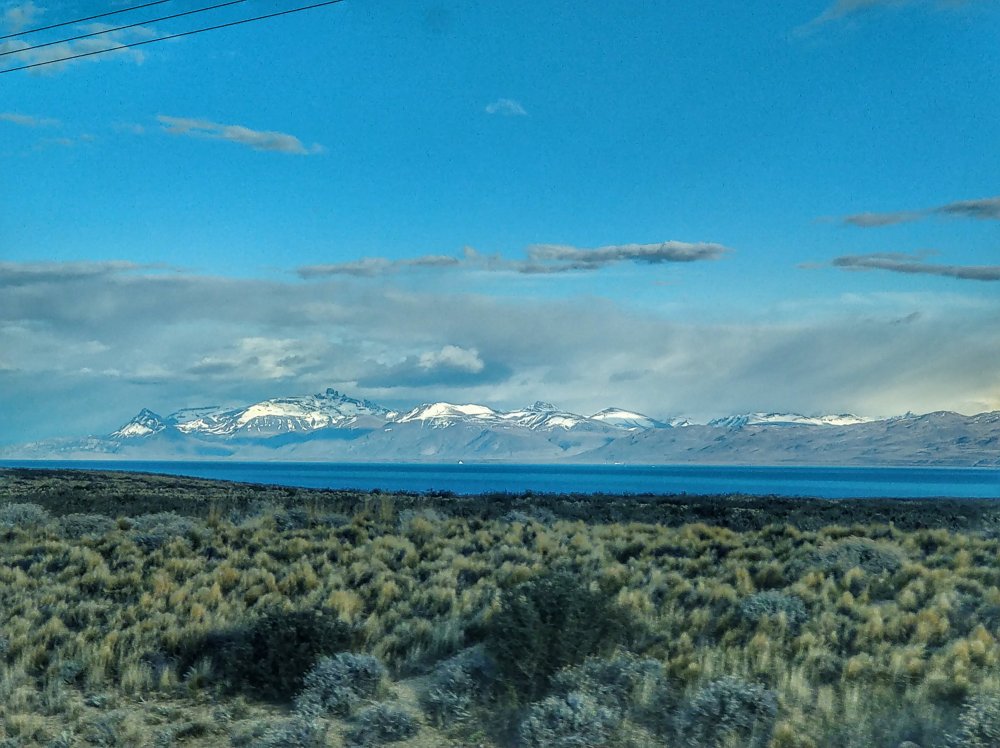 The sky was blue, the day was calm, I’d call it perfect!

However, 10 minutes before entering town, the sky completely covered up in cloud and the wind began to pick up….what should have been an amazing view of Mount Fitz Roy was no longer and we saw only the smaller mountains.

After 2hrs 30mins, we had hit the town and on first glance I thought this is going to be my kind of town.

Before we even got to properly enter town however the bus stopped at the very first building, which was the rangers station and everyone had to get of the bus.

We went into a room whereby a ranger gave us a 10 minute talk about the safety of the park, the do’s and don’ts and he especially reiterated that the weather here can change in an instant….”if it’s bad don’t go, no matter how far you’ve travelled life comes first”!

He also quickly went through the different treks in the park and there are loads!

And with that we got back on the bus for twenty seconds to take us across the road to the bus station.

We tracked down our accomodation, which is a snug one bedroom self contained apartment in which we will stay for 5 days 4 nights.

We literally dumped our bags, put on our walking boots and headed out to start ticking of the treks…we would explore town later.

So El Chaltén is an absolutely beautiful mountain village…in the middle of nowhere. This quaint little place sits in the shadow of Mount Fitz Roy and is surrounded in nearly all directions by mountains.

Chaltén is a Tehuelche word meaning ‘smoking mountain’, as they had believed Fitz Roy was a volcano because its peak is most of the time covered by clouds.

And true to form, she was smoking alright! We couldn’t see a thing! Well actually we saw the smaller mountains but the real ones were hidden out of view.

El Chaltén sets the scene for some incredible hiking. Its a major trekking destination due to the wide variety of trekking routes accessible with varying degrees of difficulty criss-crossing the national park and for that reason was named Argentina’s Trekking Capital.

Today the sole reason for its existence is tourism. As mentioned in previous post, in 1985, Argentina and Chile had a border dispute to gain and claim rights over El Chaltén with Argentina coming out the winner….no wonder they wanted this place!

This town is probably best known for being the gateway to Mount Fitz Roy and Cerro Torres, two of the most rugged and impressive peaks in the Patagonian Andes.

Patagonia’s El Chaltén hiking trails are on the bucket list of every serious hiker and you could spend ages here, as mentioned we plan to stay for 5 days 4 nights to get as many hikes in as we can in the nearby mountains and even that won’t be enough!

Again due to the weather we had to factor in extra days to guarantee getting the above two hikes done, Mount Fitz Roy and Cerro Torres…and even with those extra days there is no guarantee we will even get them done!

So today because of the high winds and clouds we chose sensibly and stayed on the lower trails.

First we headed to Los Condores Viewpoint which was approximately a 45 minute hike uphill. From here we saw the whole if El Chaltén and some of the small mountains.

We also got to see the Andean Condors once again gliding over us. 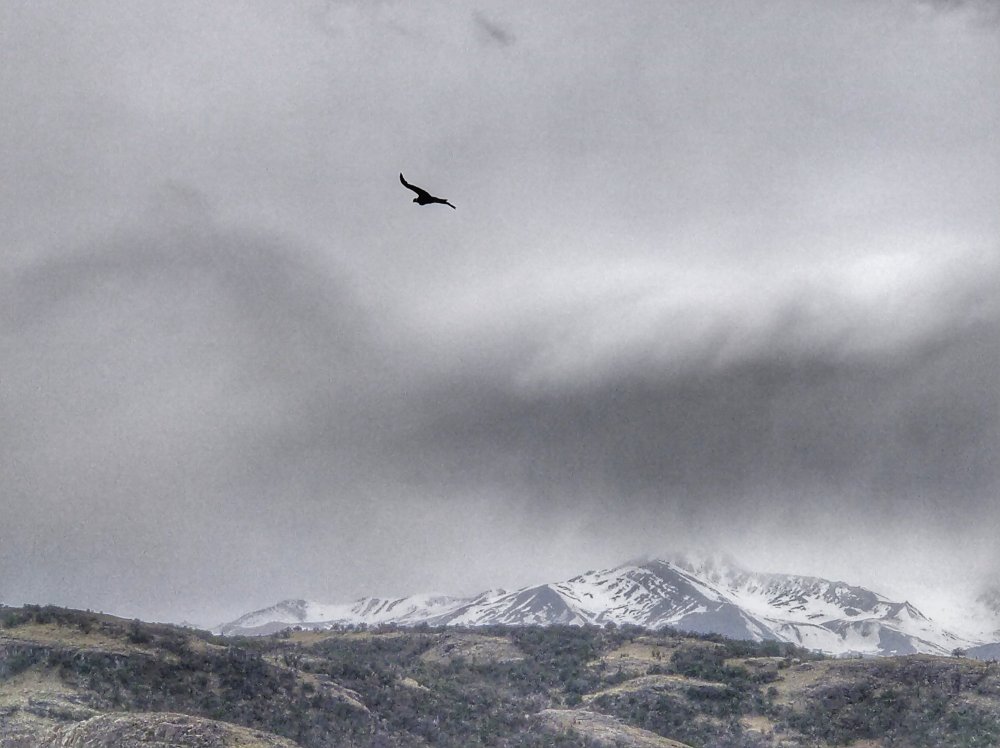 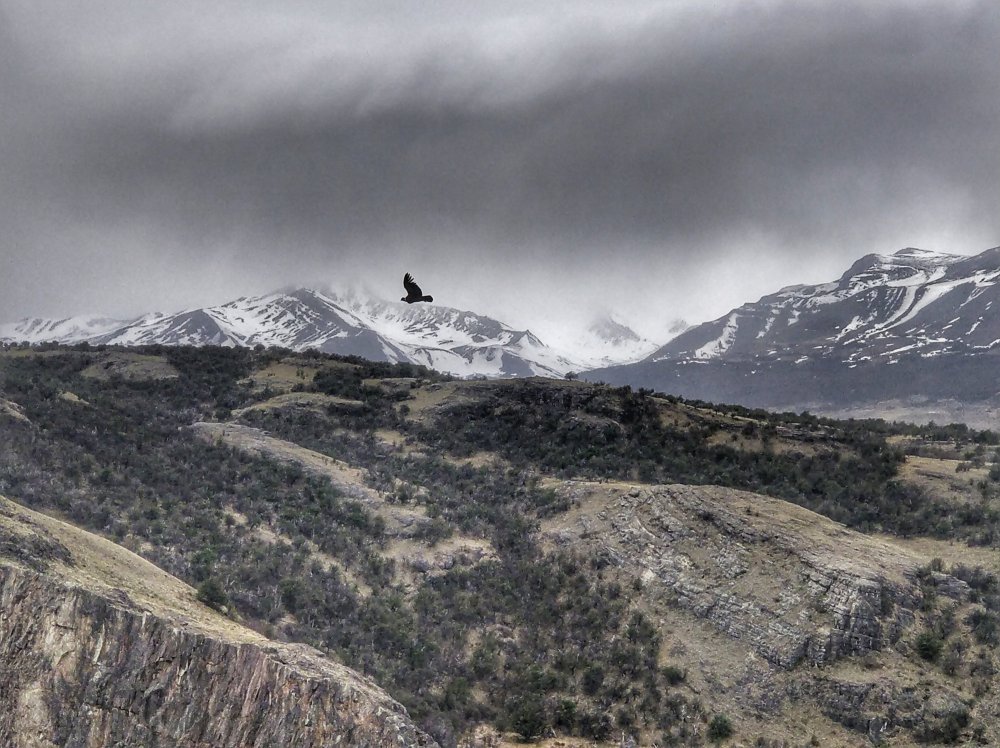 After here we headed to the Las Aguilas Viewpoint which was another 30 minutes beyond Los Condores. 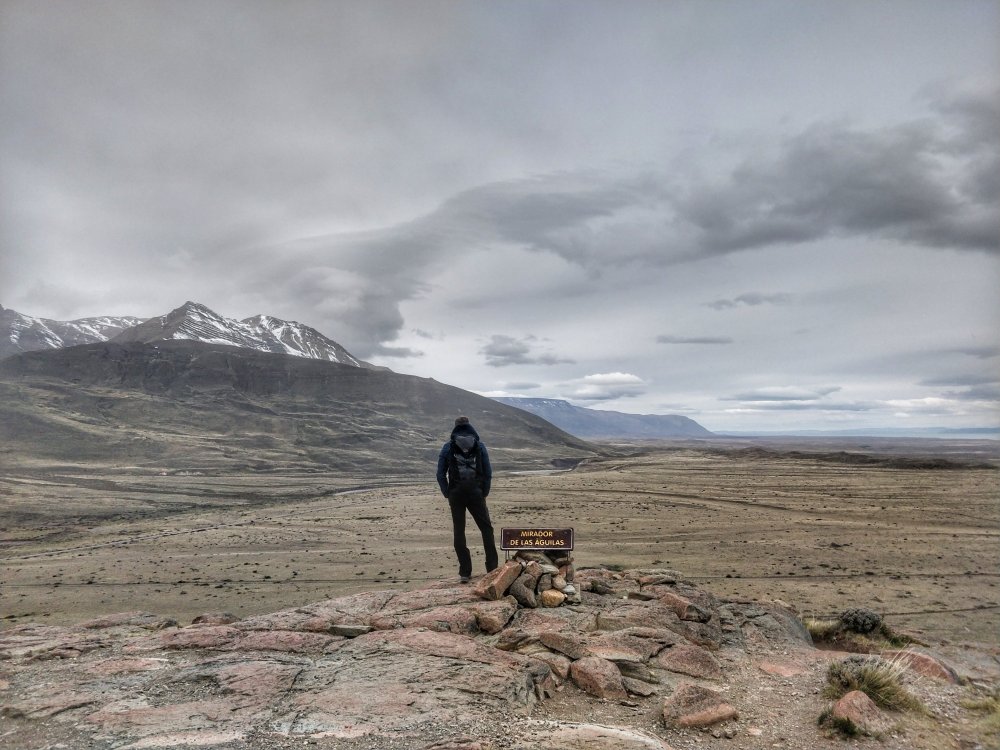 From here we saw Lago Viedma (lake), with icebergs floating on them and we got great views of the road we had just travelled, the Ruta 40.

We were intrigued by music we heard from the top of the hill coming from the village so decided to go off and explore.

We walked from one side of the village to the other side and came across one amazing surprise….a gaucho rodeo. 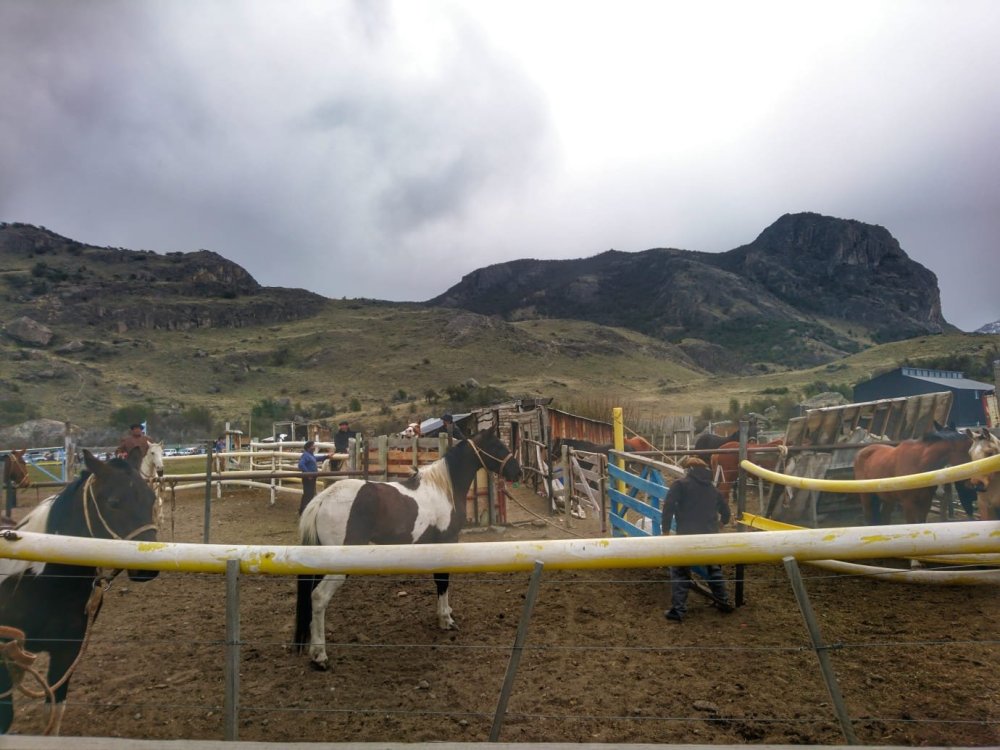 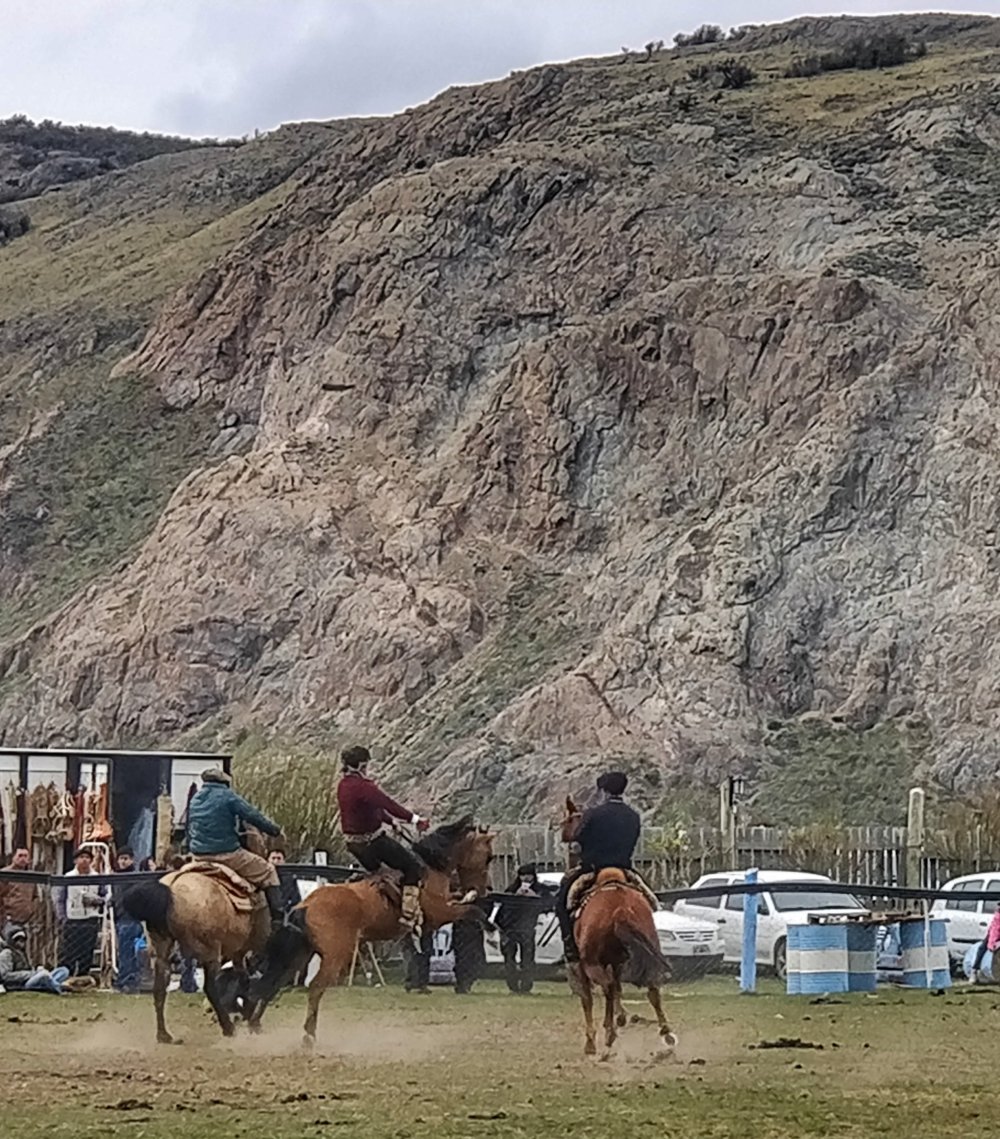 We watched in awe for ages trying to figure out what was actually happening. 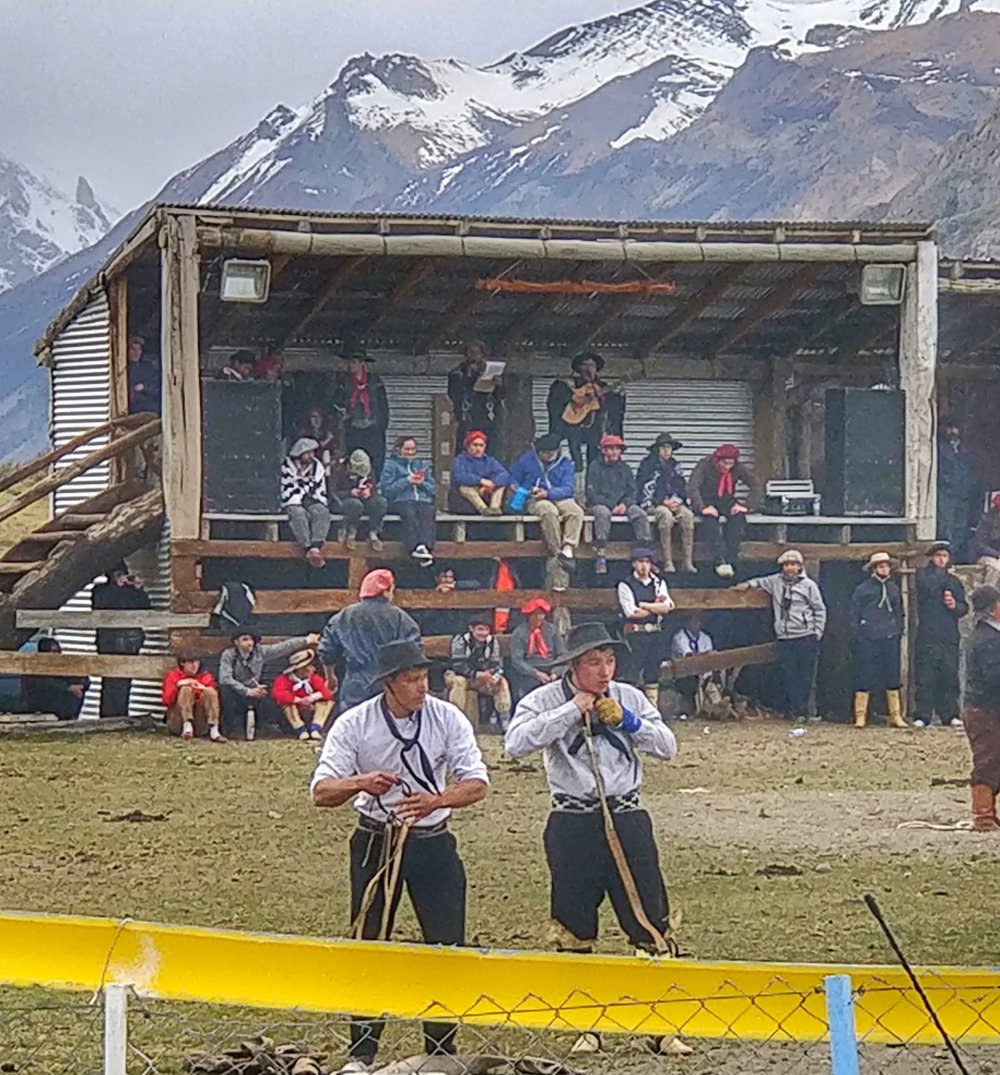 So my interpretation of things were that they were trying to demonstrate the skills and bravery of a gaucho by riding wild horses.

So basically a couple of the gauchos were on tamed horses and it appeared they were there to control the wild horses.

Then what I would class as a very very brave gaucho jumped on the wild horse.

This was then let loose and it went crazy. Jumping, kicking, galloping, bucking and throwing the gaucho all over the place. The gaucho was then expected to last up to 15 seconds on the horse.

The two gauchos on horseback let this go on until they were called in to ‘rescue’ the gaucho on the wild horse, if the rider was lucky he was still on the horse, if not he was thrown to the ground, the gauchos would gallop over and use their horses once again to gain control of the wild horse. 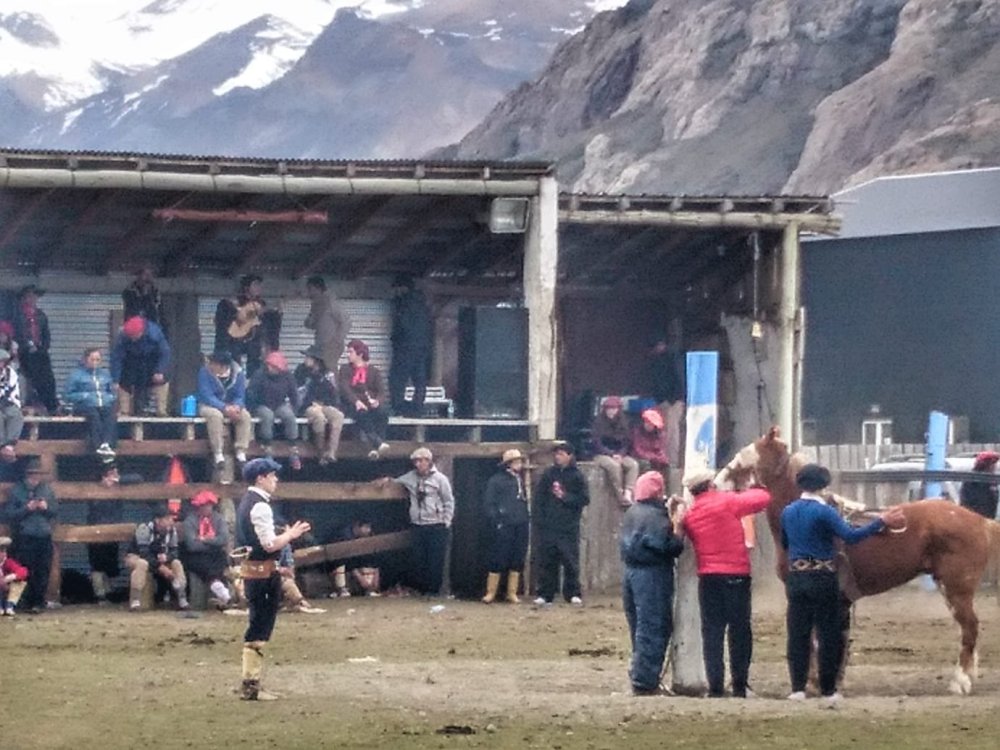 Check out their amazing dress sense, these are all guys btw

From here we then came across a running event and how they ran in that wind I don’t know but they did and actually maybe that is why we only saw three people running in it?

Then we went on to do another hike this time to a waterfall, Chorrillo del Salto. This was a really nice walk, but the winds picked up making it much harder than it really was.

The waterfall was so beautiful and in an amazing sheltered spot.

I am loving El Chaltén already. It has a cowboy, rustic, hippy feel.

The isolation here is appealing and one of the main characteristics of this place. They say there isn’t an efficient home telephone network, mobile phones don’t work in certain places and internet connection is poor…in my opinion these qualities ARE one of its attractions…..HOWEVER…I am connected right now…imagine that!

So as our luck would have it all day Mount Fitz Roy was hidden, by night time the winds had really picked up, the Argentinians would say ” it was mild”.

Our self contained apartment shook, the doors rattled, the wind howled, it was wild.

Most people would stay indoors, it was dark and blowing a hoolie!

But we were intrigued by those mountains, would they be visible? It was almost dark we ventured out and low and behold we got our first glance of them….JUST visible in the dark.

It’s going to be so impressive!