We were back up early at 3.50am and starting our trek at 4am on the same route up to the towers for sunrise, this time in the dark…..it’s around about a 8.8km/5.4mi hike, 4.5hrs there and back (we actually did this yesterday in 3hrs 15mins under pressure), not easy but worth it…I mean we did it twice, that’s how worth it it is!

Today however we were told there could be clouds but we were willing to chance our luck.

We headed up in the cold. As we got into the last hour or so of the trek the sky was getting lighter, it looked clear with a few clouds…maybe our luck would be in!

We kept hiking. Legs were tired and the pressure to get up there before sunrise was on…we kept hiking. We started to see the towers above peaking through some clouds the sun starting to touch them…it was going to be beautiful…I pictured the sun hitting off them, the towers turning to orange, red….it kept me going until I was there, we had reached a different view point to the one last night, this time we sat at the bottom of the towers beside the frozen lake. 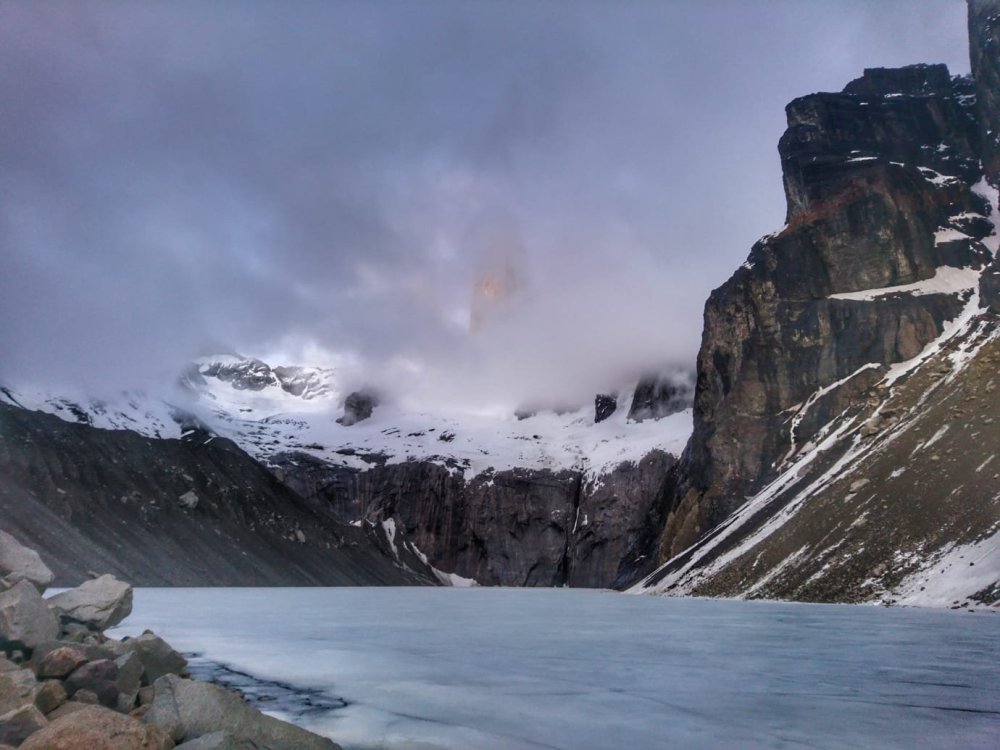 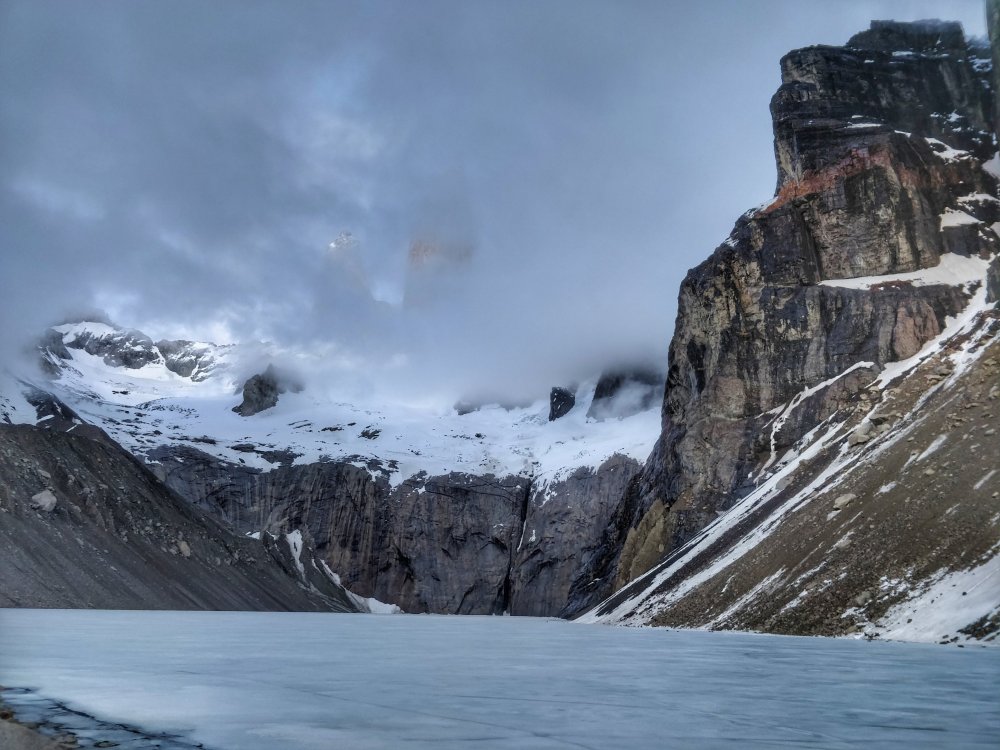 The sky clouded over, the towers were gone. It was freezing.

We sat on the rocks. Simply pleading for the towers to show. The sun appeared shining on the mountain beside the towers creating amazing light features, the towers remained hidden. 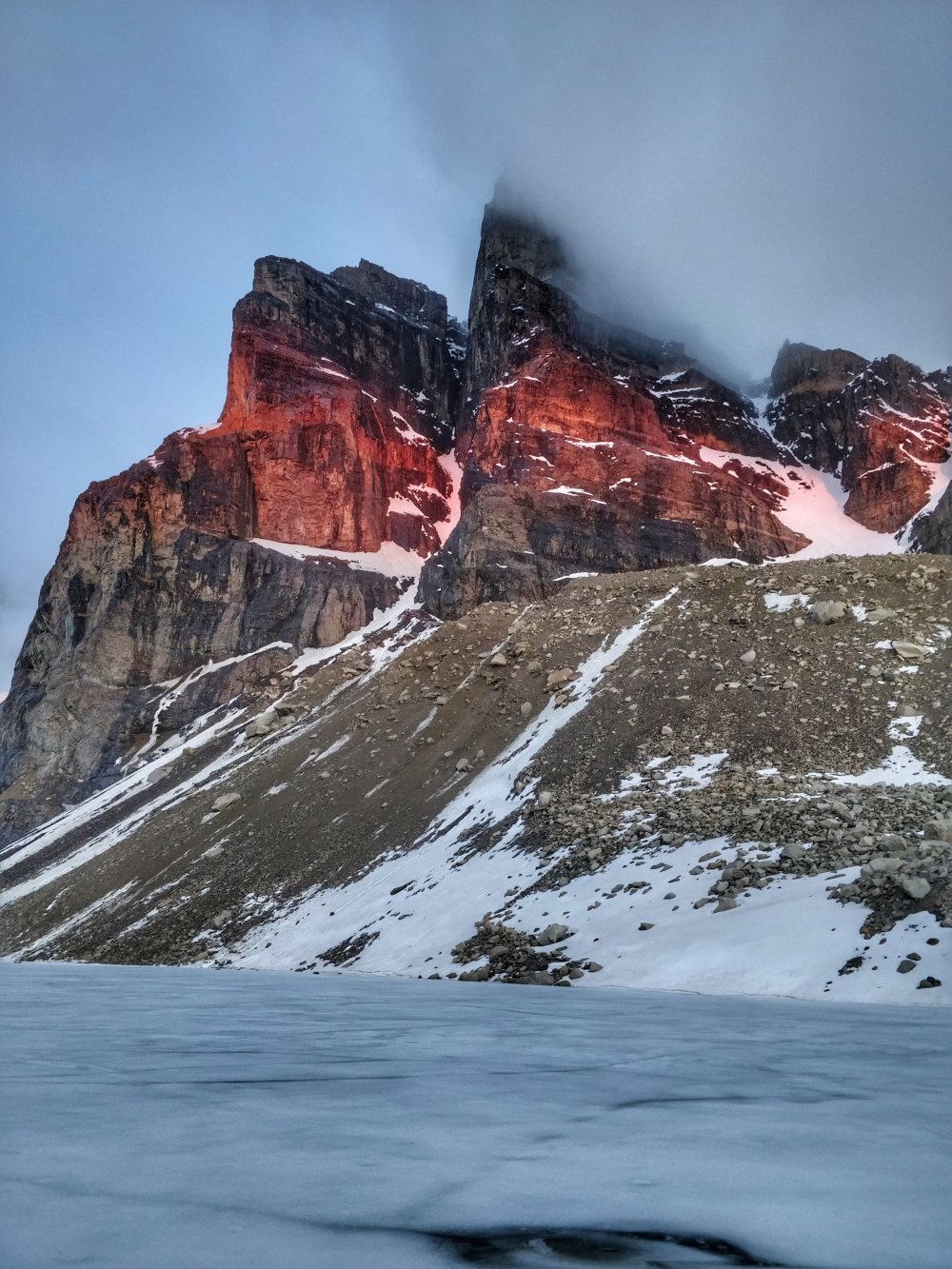 We still sat and soaked in the moment, getting colder and colder.

After one hour and twenty minutes of waiting we had to leave. 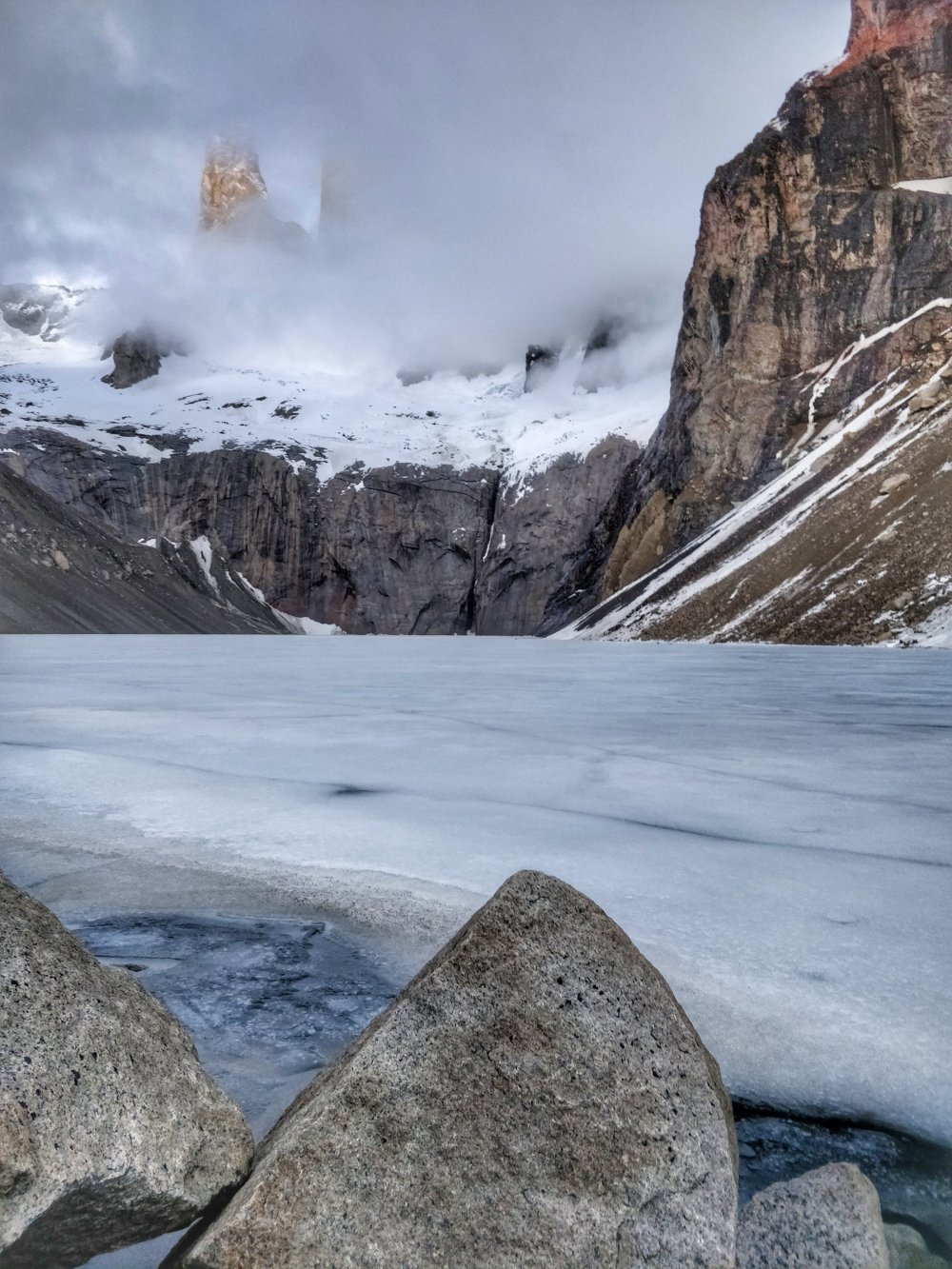 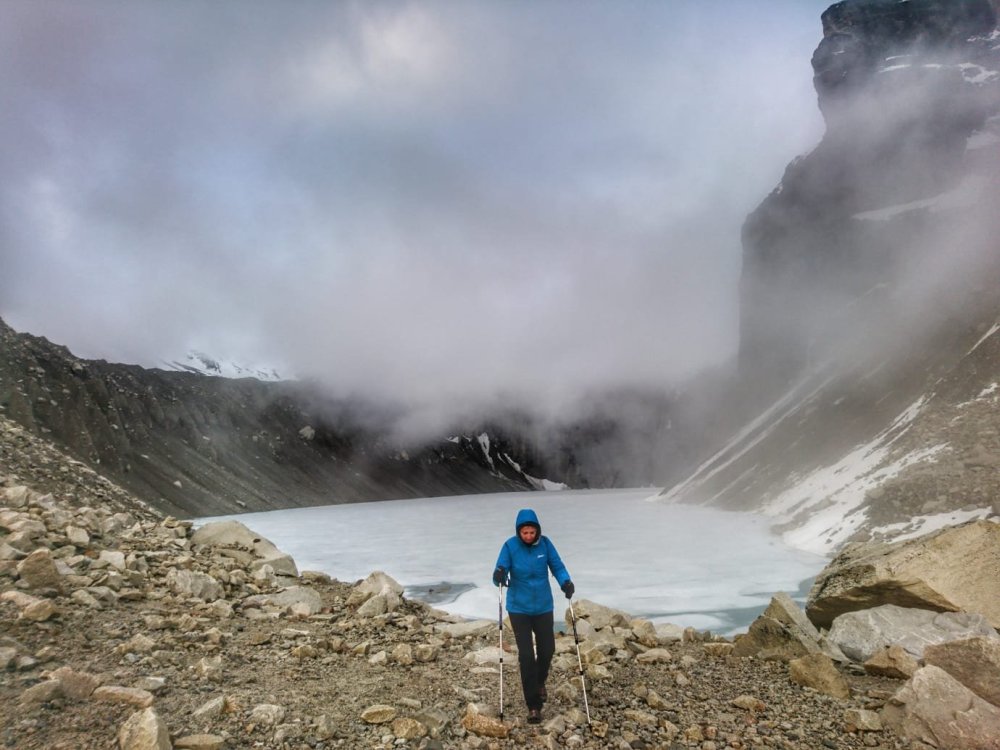 We were frozen. I mean frozen and we needed to be back at camp as the tent needed to be removed by 10am and we also had our bus to catch at the bottom of the final piece of trail and it was a long hike out.

We had to leave. 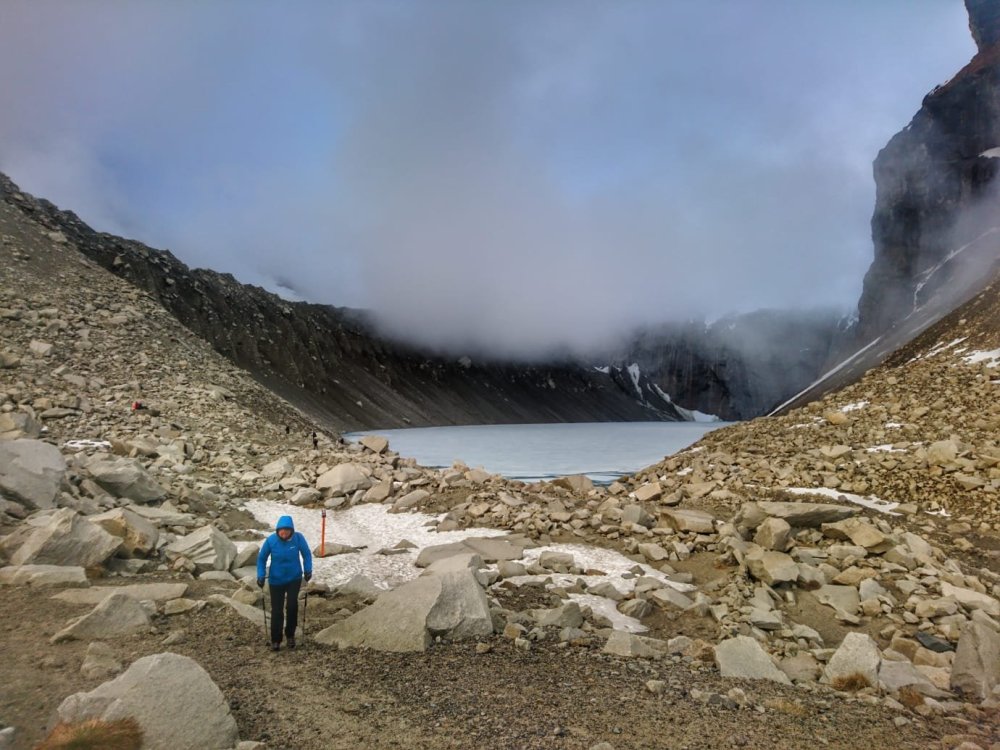 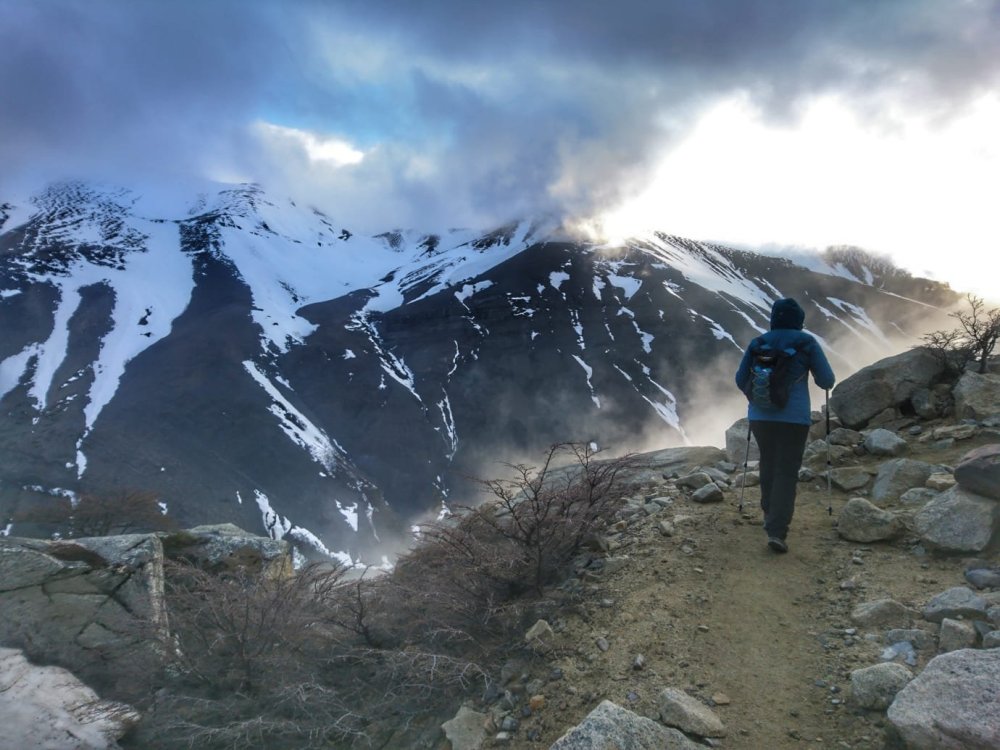 We returned to camp reluctantly, took down our tent, packed up our stuff and headed back down quickly to Torres Central to catch our bus to take us back to Puerto Natales….remember buses are few and far between so we were on a tight schedule.

As we finished taking down our tent, the towers appeared through the clouds 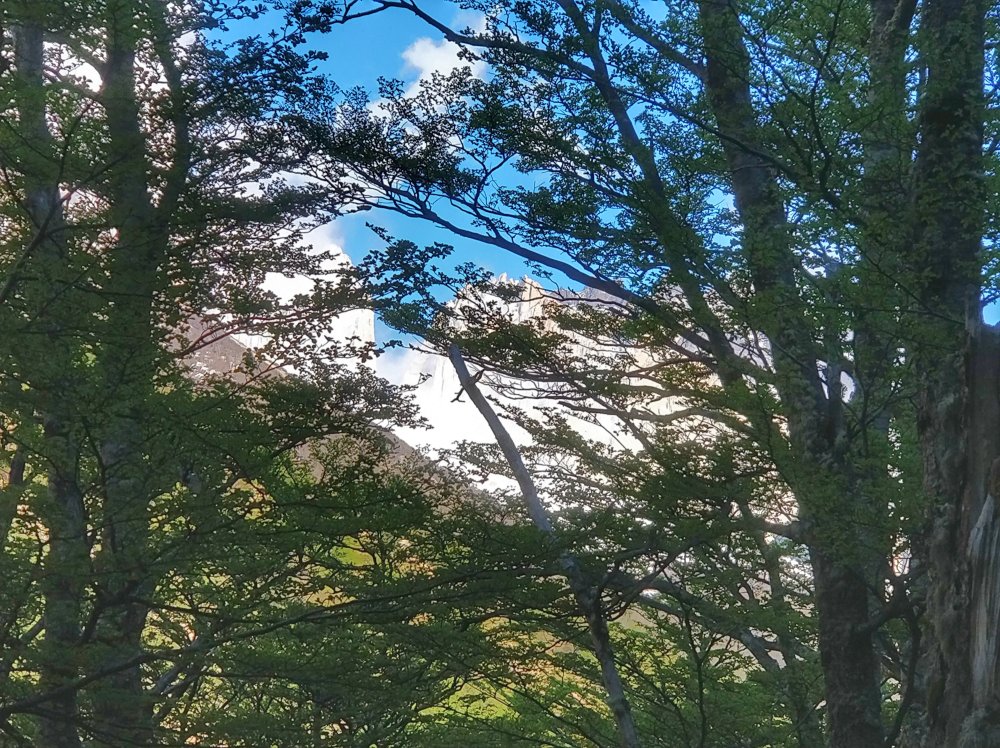 It was a bittersweet hike. Excited for all we had accomplished, but sad this trek was over.

The first half of the final trek out of camp was a long steep hike up.

Then the last part was a long steep down. I’m still trying to work out which part of that was worse. 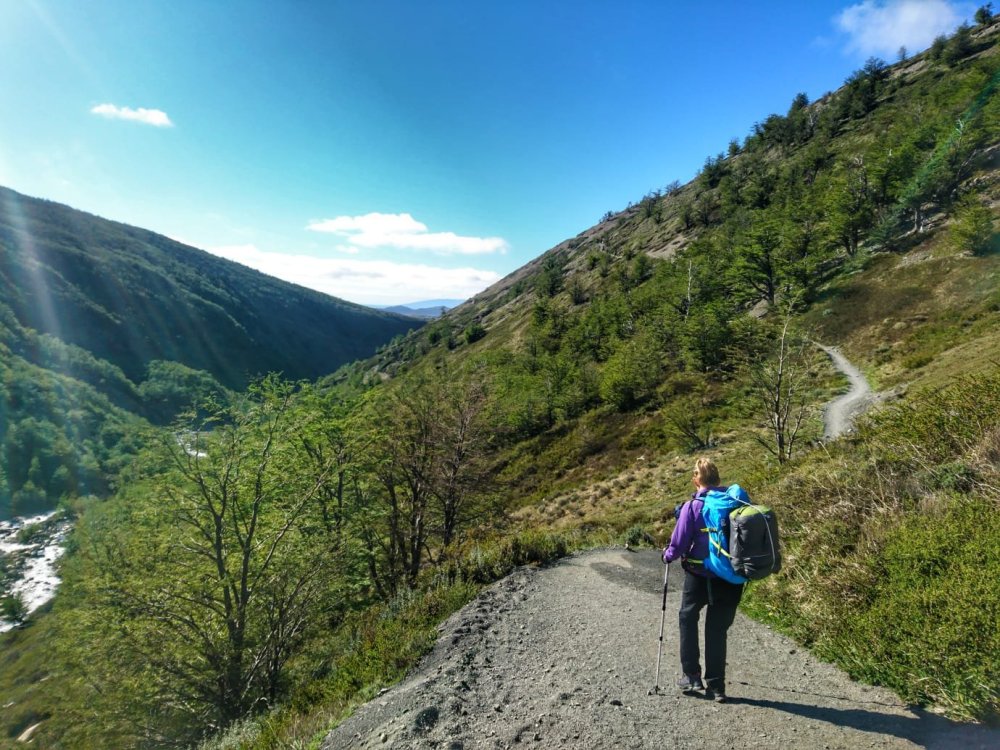 Then we hit the bottom of what we thought was the end of our hike, but ow no. 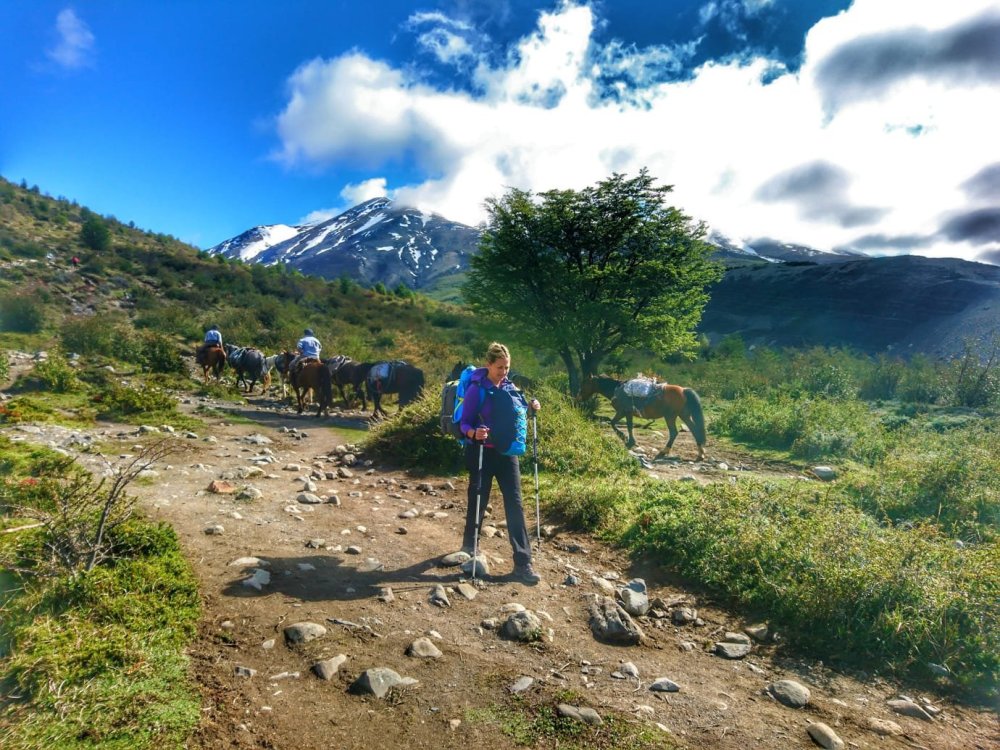 We had to walk for another 15 minutes more to the Visitor Centre which was at the other side of the park. This was all on flat ground, mostly soft grass but it was the hardest walk of the whole trek…it went on and on and on until finally we were there…The W was complete. 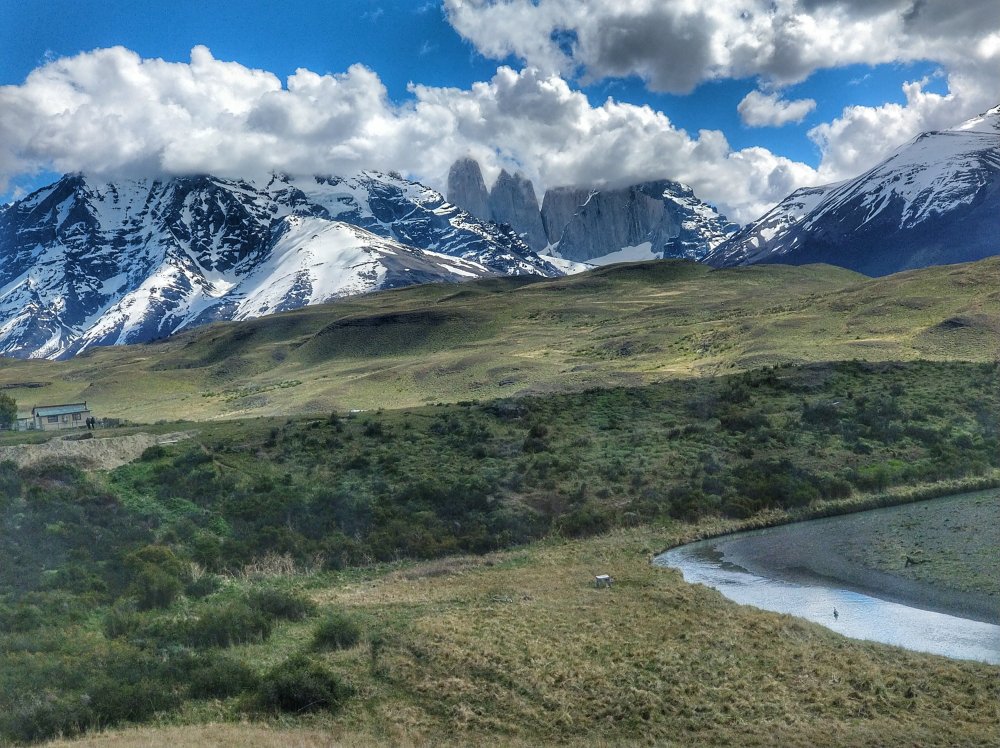 This adventure had been amazing, the scenery is simply some of the most spectacular on earth, with breathtaking views of mountains, alpine lakes, forests, glaciers and so much more. 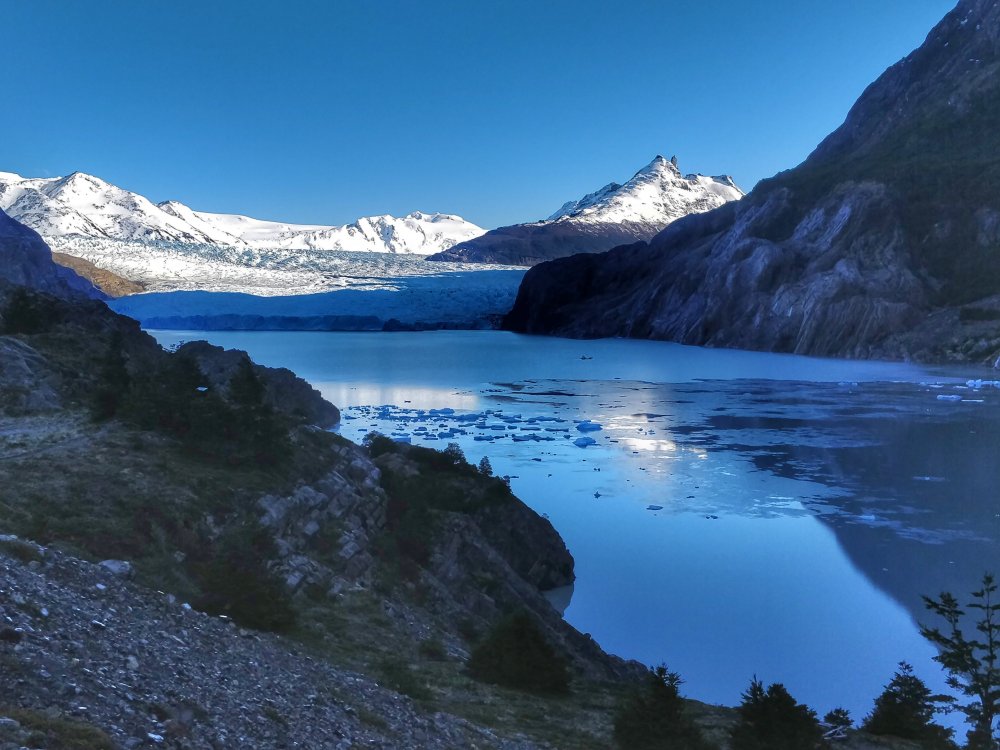 This Circuit (and The O Circuit I believe) are the crown jewels of long hikes in Patagonia. It was a worthy adventure, challenging, captivating and full of changing landscapes. 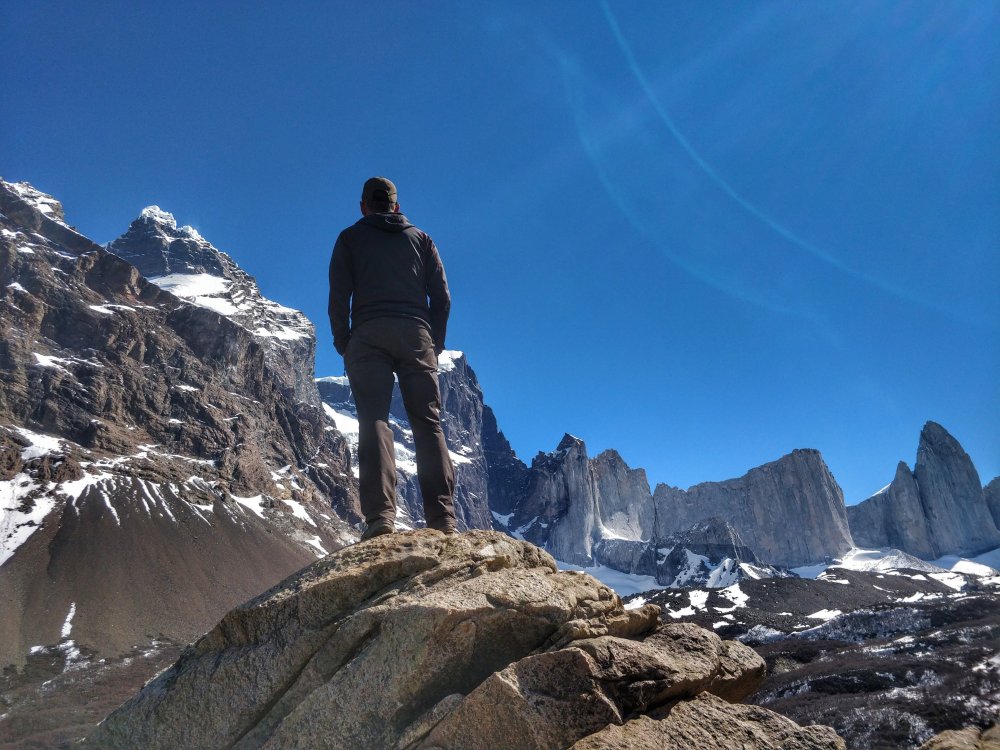 There were many physical challenges, from the heavy rucksacks;same food everyday(but I actually loved my dinner and enjoyed it every single night); coldness; a rock solid bed and there was also harsh and stunning landscapes, but the number of ‘wow’ moments was uncountable and I would do it all again.

Trekking in Torres del Paine was different to other places I have been and you could very much count on winds (we didn’t get the usual really strong ones but they sometimes let themselves be known to us and we have been told this is rare), rain (we didn’t get this either apart from a small moment waiting on the catamaran) mud and sometimes even snow (we had this on the ground at points but it did not physically snow).

Though the weather is crazy, and can change in a minute, the region is remote and trails can be tough, it’s one of the most impressive places to do long distance treks thanks to all of the crazy rock formations and glaciers, I would recommend it to anyone!

The Torres is what makes the park famous, and when you see them for yourself it’s obvious why. They’re giant jagged peaks covered and surrounded by snow and ice, positioned perfectly.

And the challenge of it all…I love that feeling I get when I’ve been hiking for hours. The trance you fall into, keeping life simple along the trail. The only things you really have to worry about are your destination, water, food and where to pitch that tent.

Hiking lets me put everything on hold, and when you travel to places like this, the immensity and majesty of the backcountry reminds me once again how significant things can be in comparison. 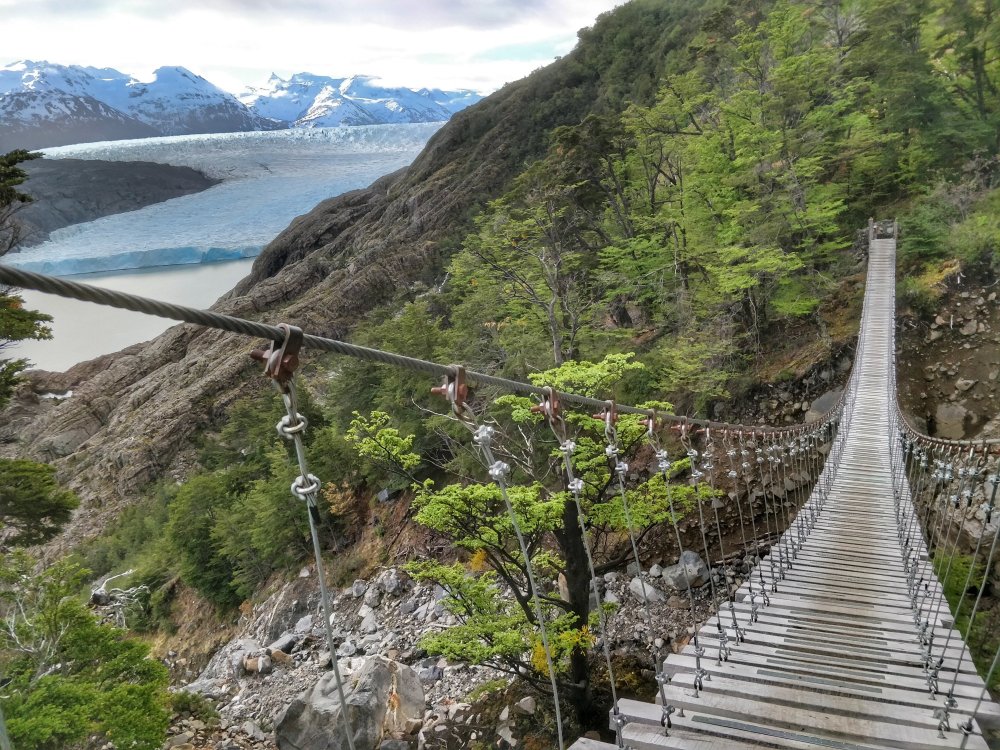 When I’m able to get that feeling that I’m part of nature, instead of just passing through it, I reach an inner calm…I stop thinking and start sensing all the things around me….that is what Patagonia does!

Throughout the trek there were also many funny moments like times we were seeing things in trees for example look at that tree it looks like a dragon – insanity kicking in.

There were infuriating moments when the Irishman had to translate English for the Scottish women to ‘foreigners’, including the English (this really did turn into a Kevin Bridges joke)! I’m only joking about it being infuriating…we laughed ourselves silly at this I mean an Irishman translating English for a Scots to the English, like really, are you having a laugh!!!

Then waiting for the bus at the end we sat chatting to a couple also waiting for same bus. The guy was asking if we had been up to The Towers etc and we were like yes all excited and told them about our sunrise hike. We asked them if they had done the same, his reply was this….”it was a 50 percent chance of seeing them and it took a 100 percent effort so no we stayed in bed”!

That first hike up to The Towers! Well I now look back at that and laugh myself silly….I have never got up a hill so quickly as I did that hill and I honestly must have looked like a mad woman….but determination gets results and my god that day did I get results.

Breaking the rules, hiking a closed trail and afraid of being kicked out the park…we were actually hiding behind rocks looking for ‘the green man’….I know how rediculous!!

Andy walking around with a twig in his hand incase of a puma attack, like that was going to help!

Eating wraps that were 5 days old and had been carried in a rucksack all that time and they still tasted amazing!!

Lastly….sitting in that restaurant in camp on that last night, having a very refined 3 course meal and wine…we looked and smelt like tramps and even that is offensive to tramps…and we paid for it…and I mean literally…we PAYED for it and all I wanted was my pasta…I was gutted at having to spend my last night not eating my own food that I had carried for days on end!

So here are a few photos below of different camping facilities…. 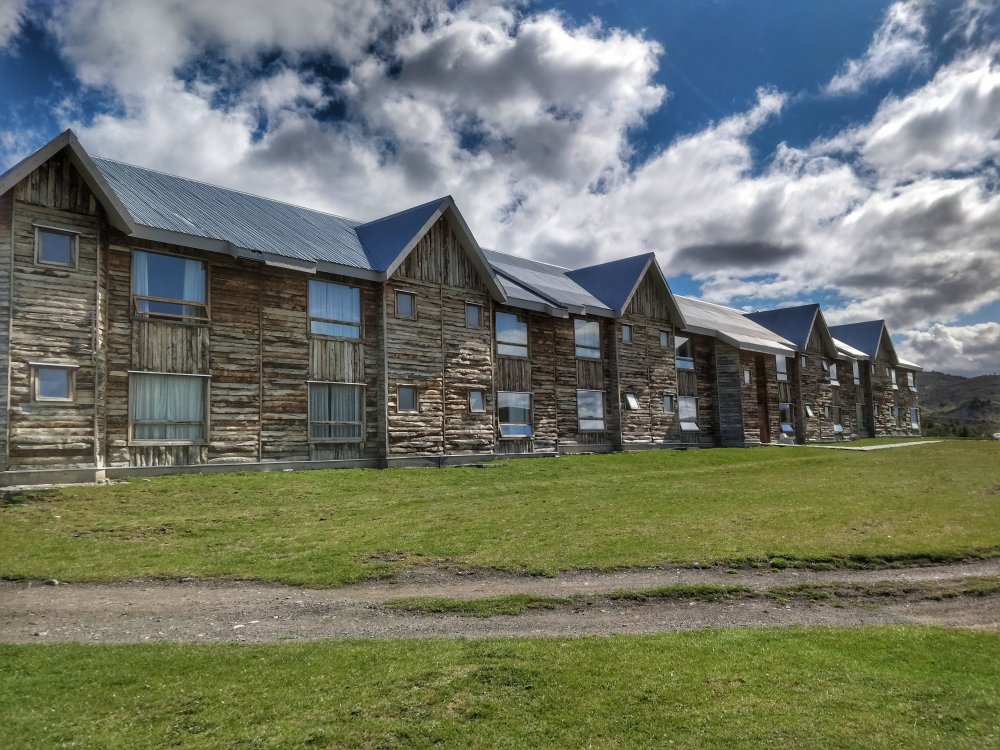 Middle Class? So these tents were all ready and made up for you coming…..AND….they all had big mattresses in them because I sneaked a peak! 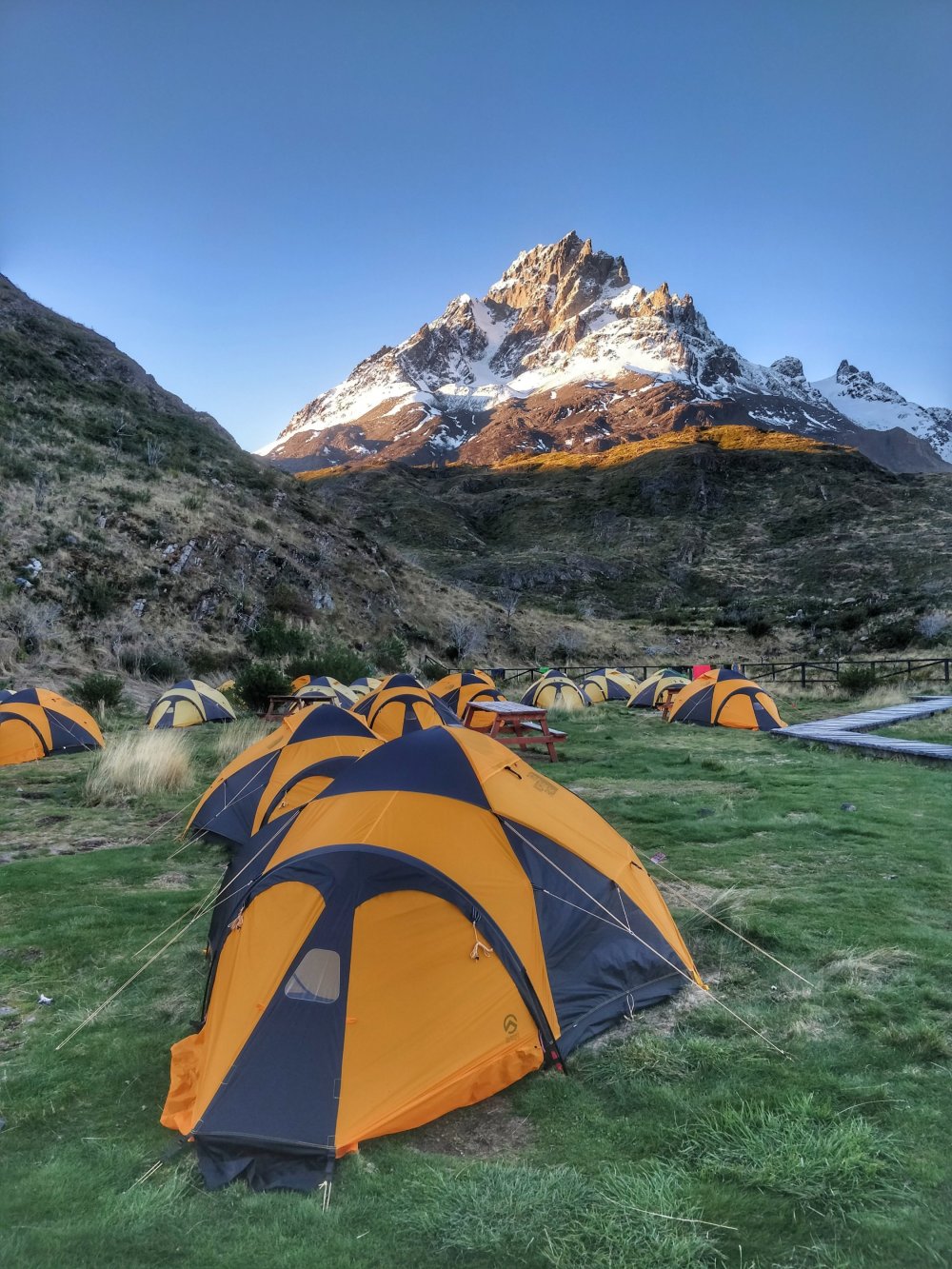 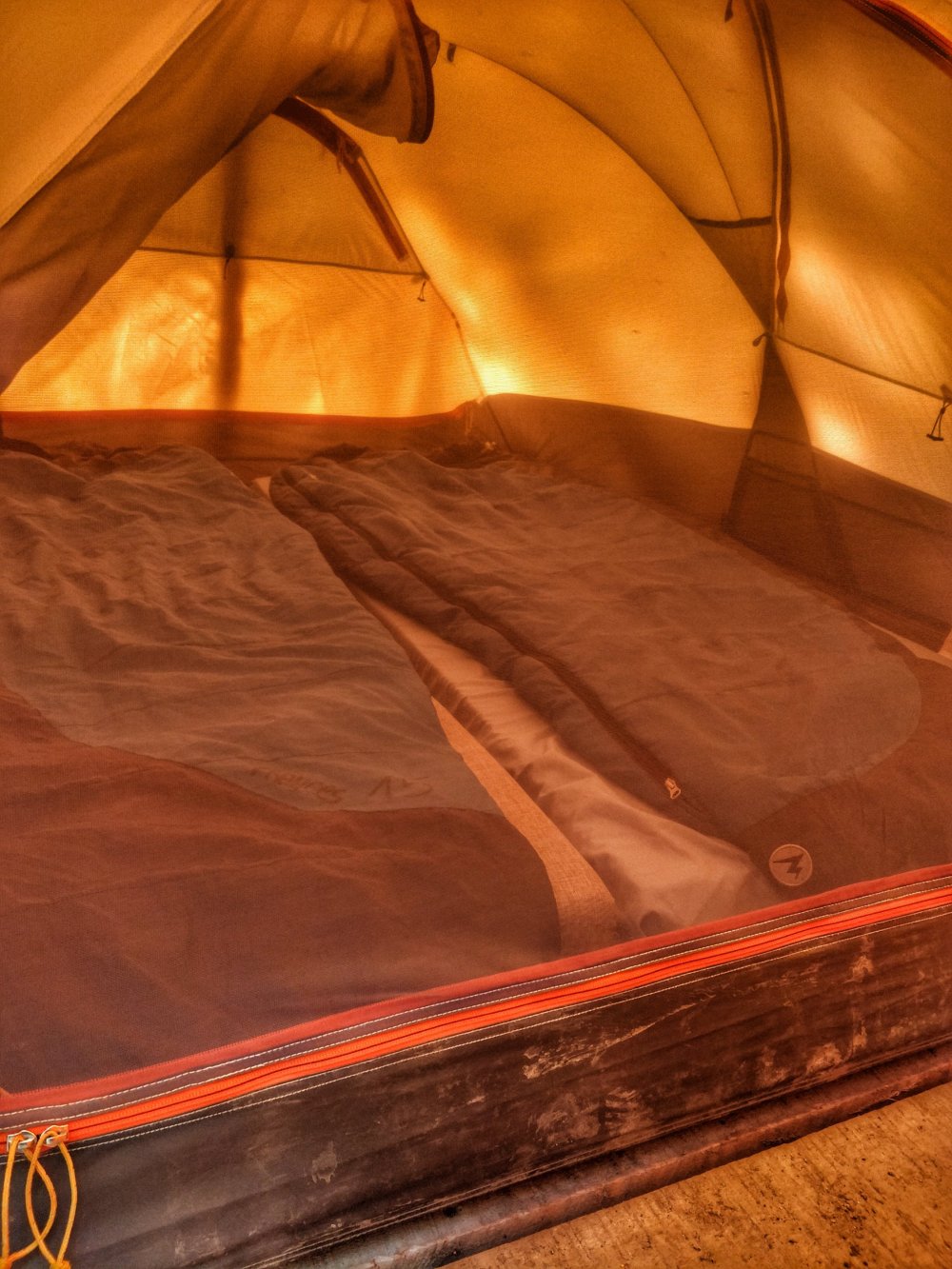 And then there was ‘Our Kinda Class’….and it was pure and simple perfection! 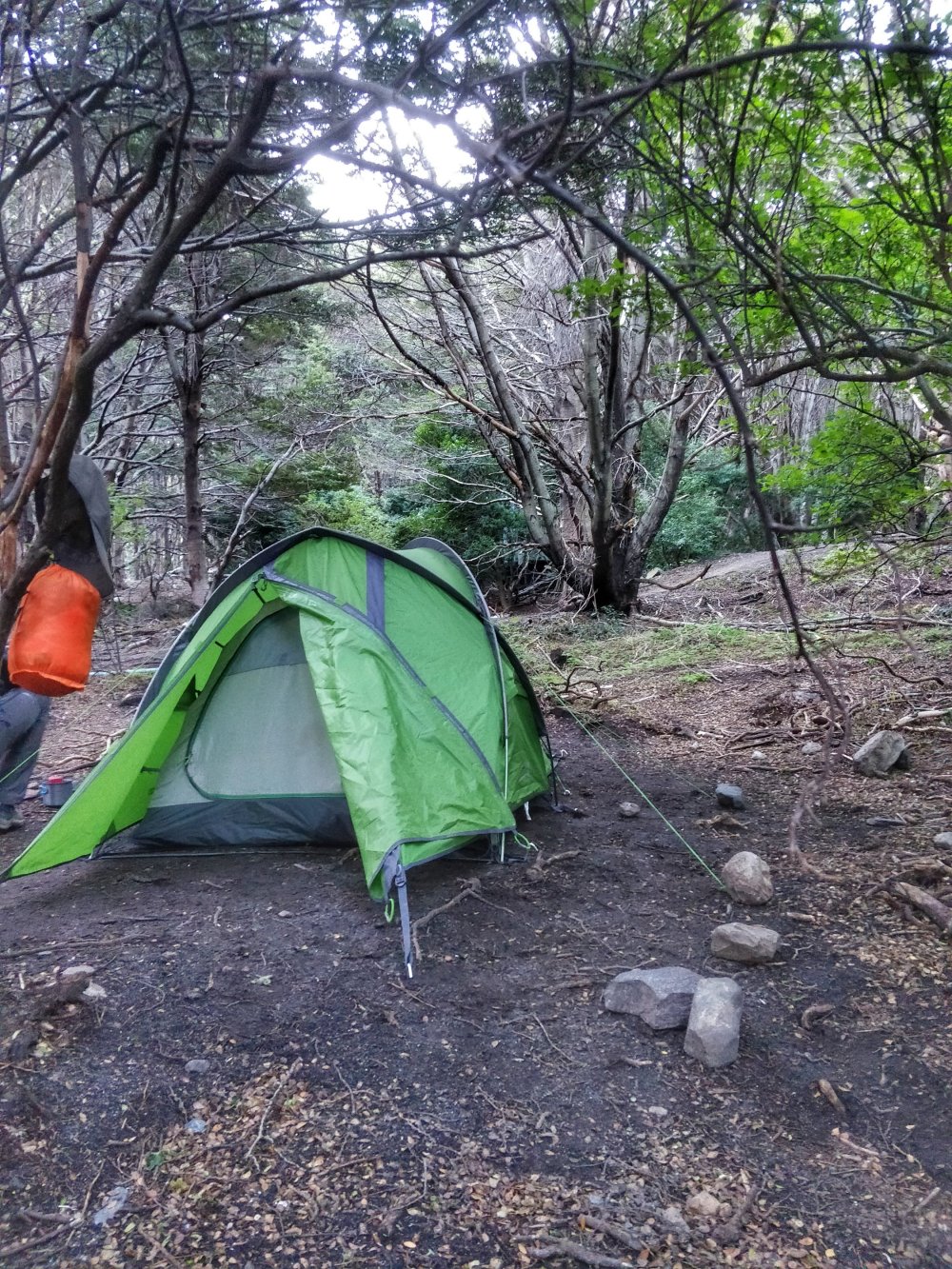 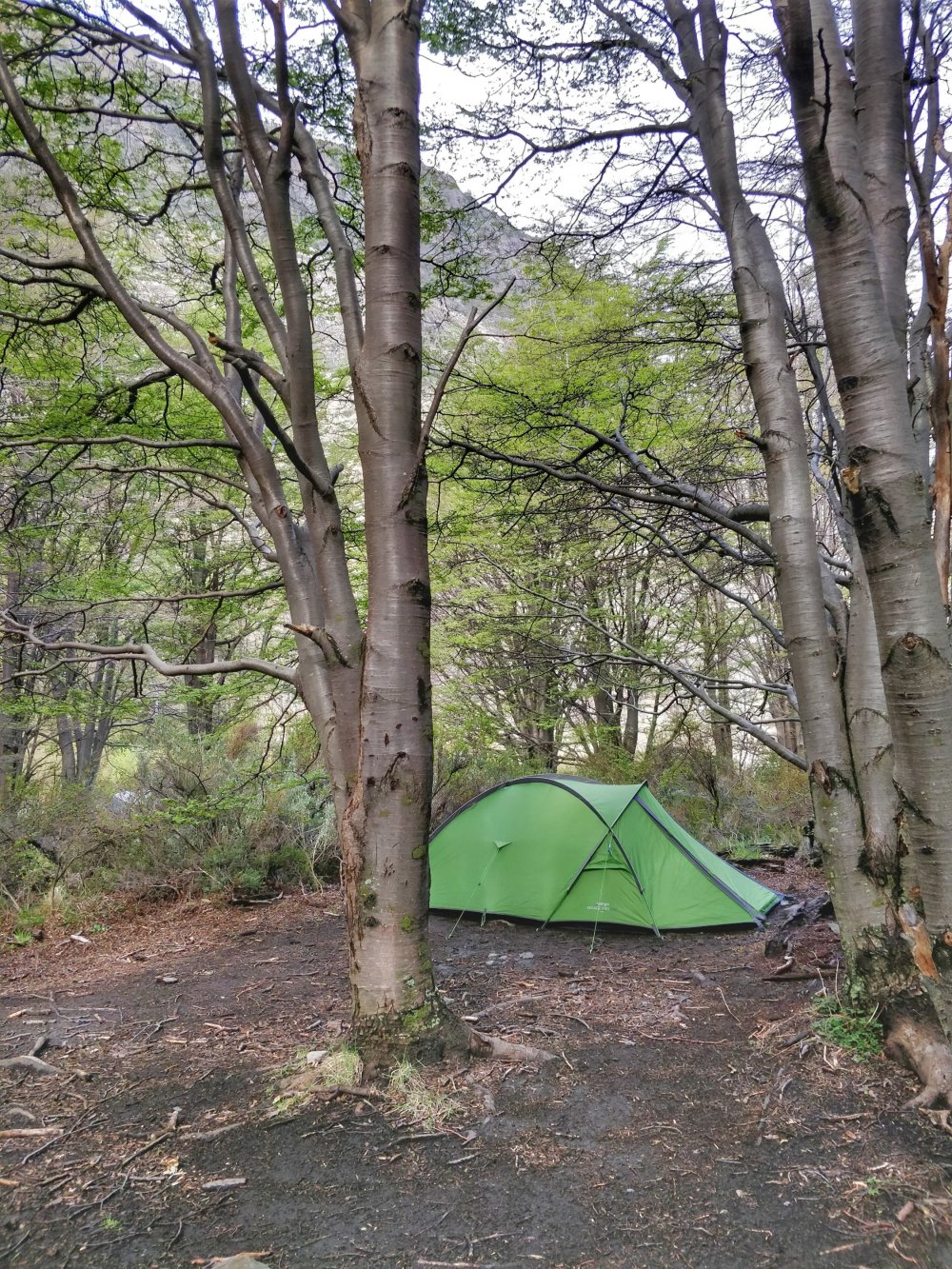 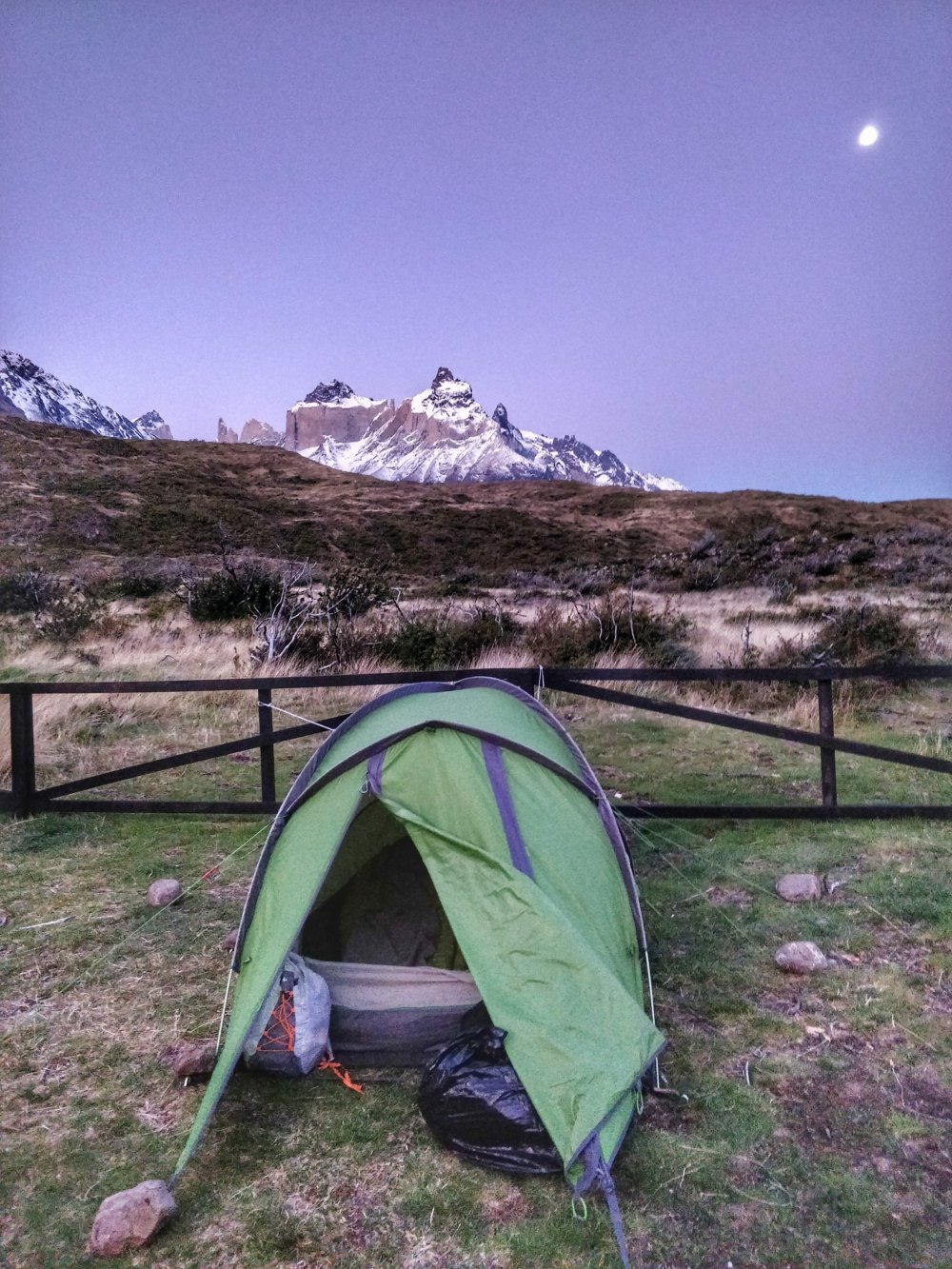 Now folks I know I’ve went on a bit about the weight of the bags but I really need to put this one to bed now the W is complete but I just wanted to show you the actual size of the sleeping bags we had to hike with every single day….and just imagine the weight in them!

And for the record this is not a ‘pose’ picture….I got an insect bite to the right eye and it was pretty sore and swollen so I had to go around with shades on for two days! Funny thing was the bite happened on the bus back!!! ANYWAY…..LOOK AT THAT BEAST OF A BAG!!!! 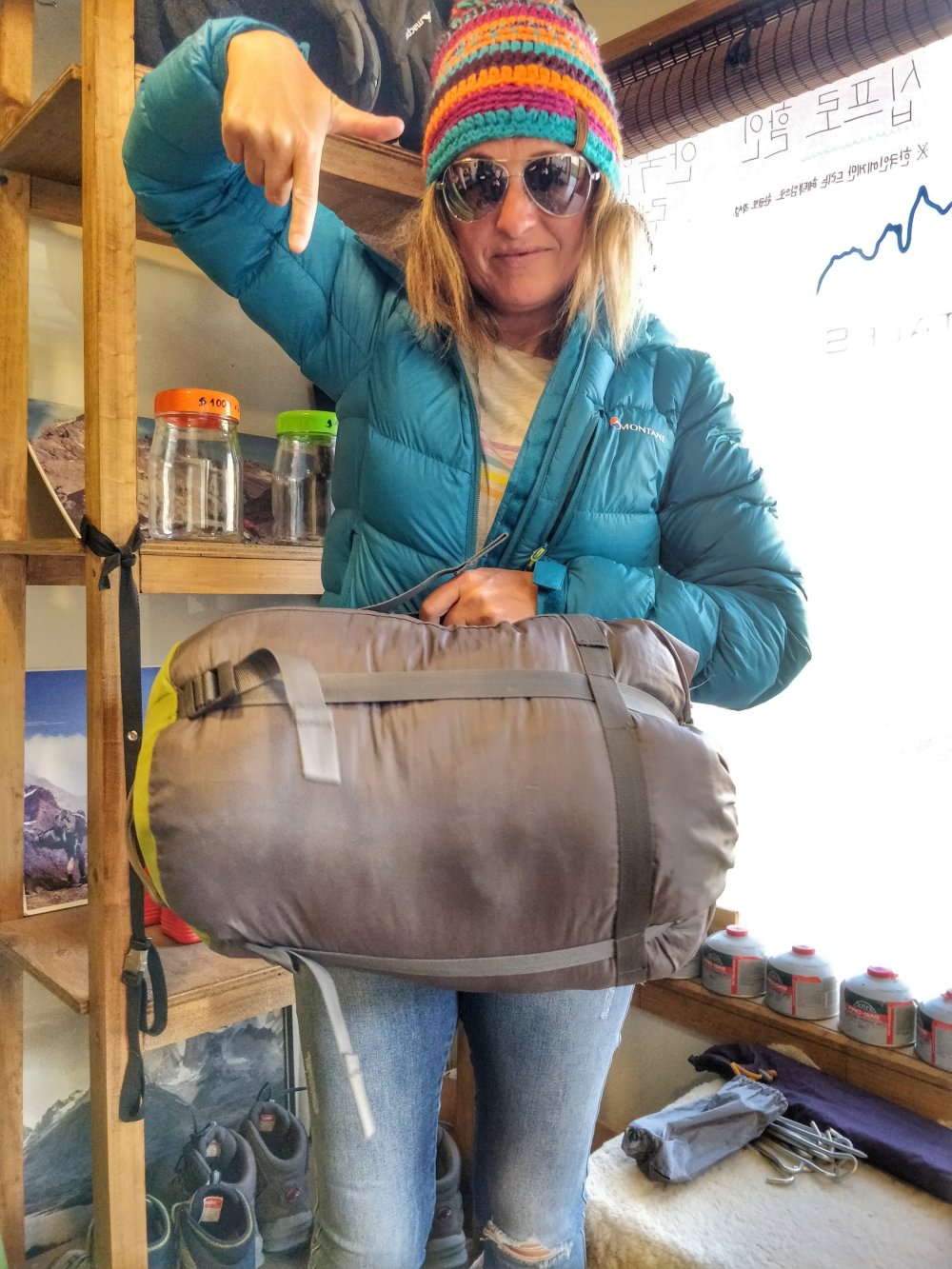