This weekends destination is the Cairngorms National Park where we plan to have a weekend of mountains. We are staying in a small static caravan on the Dalraddy Estate, set in 25 acres of Scottish birch woodland.

Our caravan boasts views of the magnificent Cairngorm Mountains, and you can walk to the River Spey from our site. 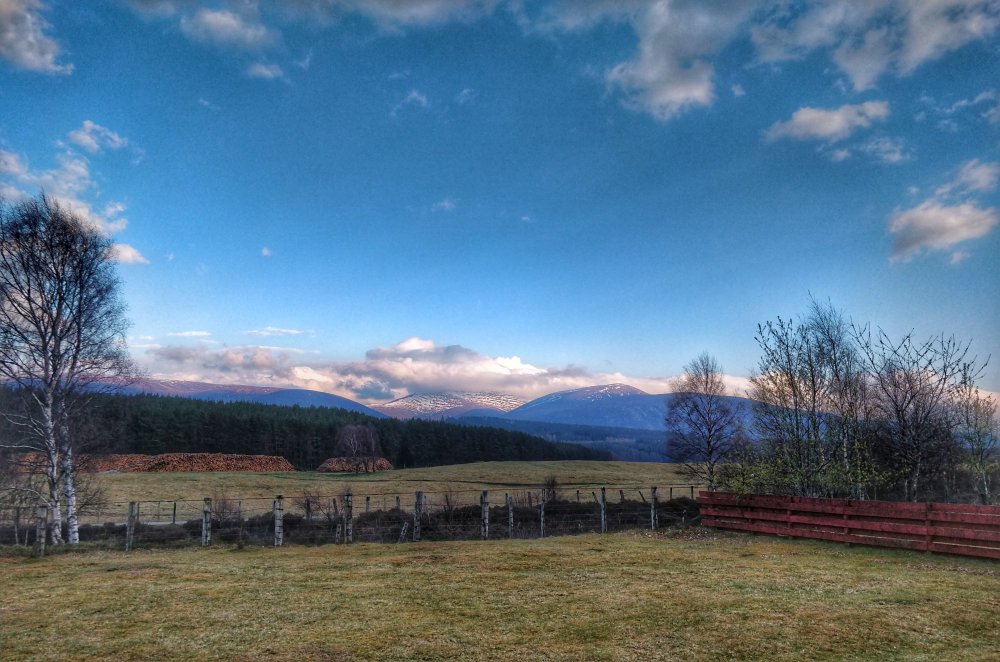 If I’m being honest…I love staying in a caravan! 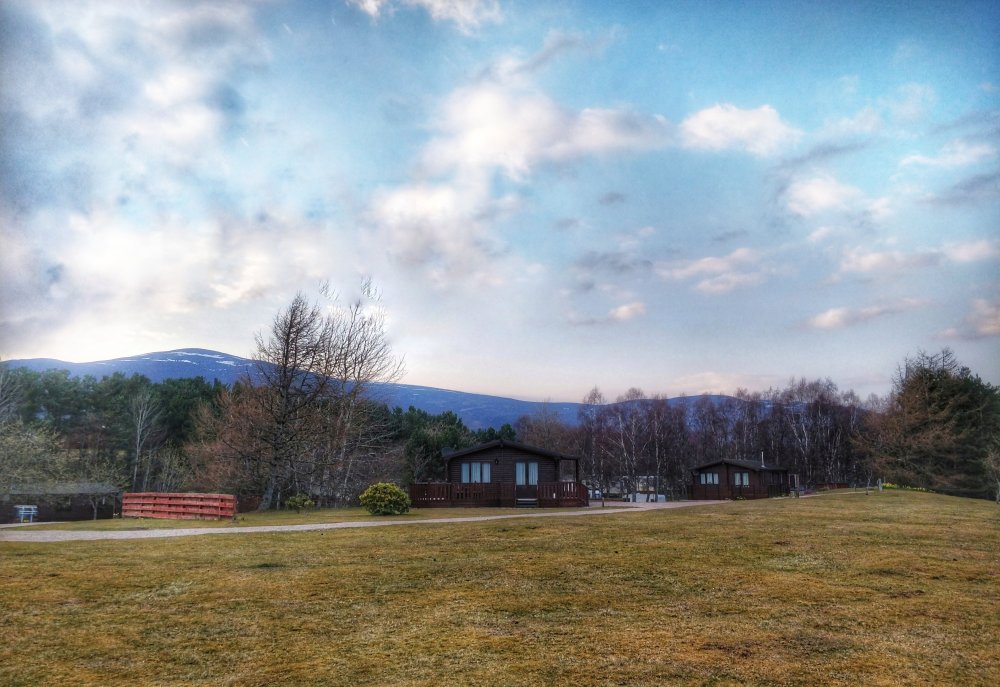 Dalraddy is near Kincraig, Aviemore and Kingussie. It’s an ideal spot to use as a base camp for rugged mountaineering and hillwalking breaks in the Scottish Highlands. Equally it makes a comfortable spot for relaxing breaks exploring this mountainous region even by car!

The Cairngorms/Aviemore is always a favourite haunt of mine and I like visiting this area and do so regularly. It’s only a couple of hours drive from home but when you arrive it appears so much further. For me it always feels very relaxing and I love the scenery…especially scenery that is so full of trees…green trees, everywhere…such beauty.

Our plan is to try to undertake as much mountain walking over the weekend as possible…and fit in long days to train those legs. On arriving we can already see that the stunning mountains are covered in snow, this is a good thing as we want to get as much winter walking done as possible, especially in snow conditions with crampons on!

We woke up to a glorious April day. The sun was ‘splitting the tree’s’ and the birds were singing in them.

The tops of the trees were blowing in the wind but these were very high trees. The weather forecast told us that the tops of the mountains (as per normal) would be windy and cold. So off we went.

We started our walk from Glenmore. Today was going to be a long day but in this weather a day to be enjoyed.

We were heading up Bynack More, a pyramid shaped munro which has a magnificent viewpoint.

We walked along a forest track through forests of Scots Pine trees and of course if I took one photo I took three hundred. 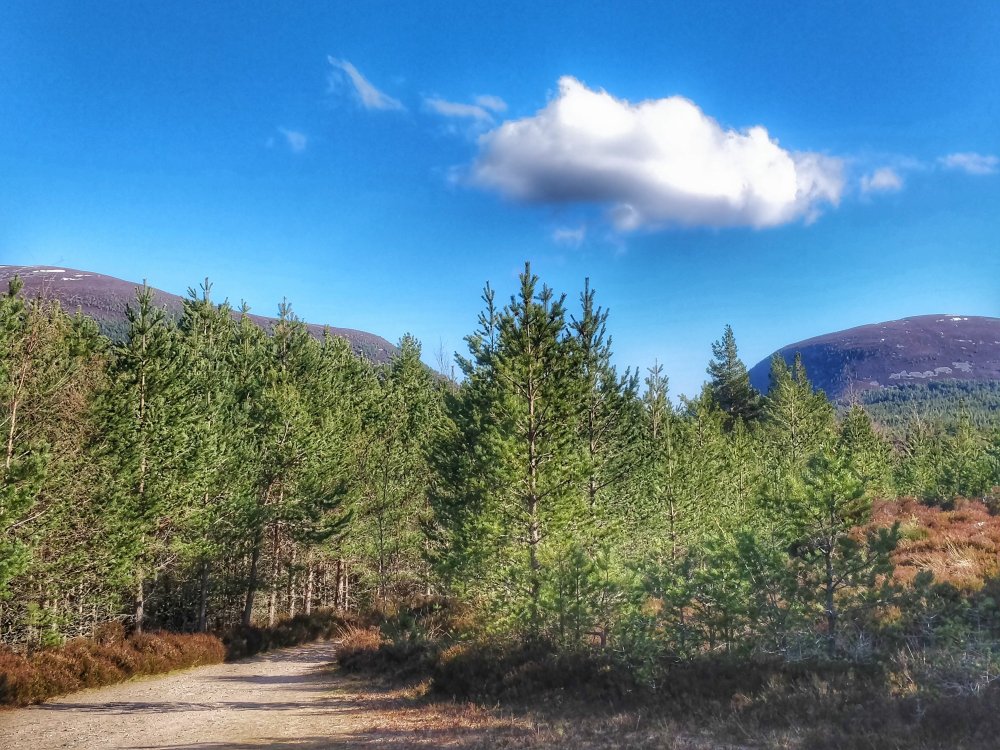 Everything was so lush and green. Scotland is such a beautiful country especially up here.

We saw several red squirrels going about their daily business in such tranquil surroundings, almost camouflaged by the colours of the trees.

Can you see the squirrel? 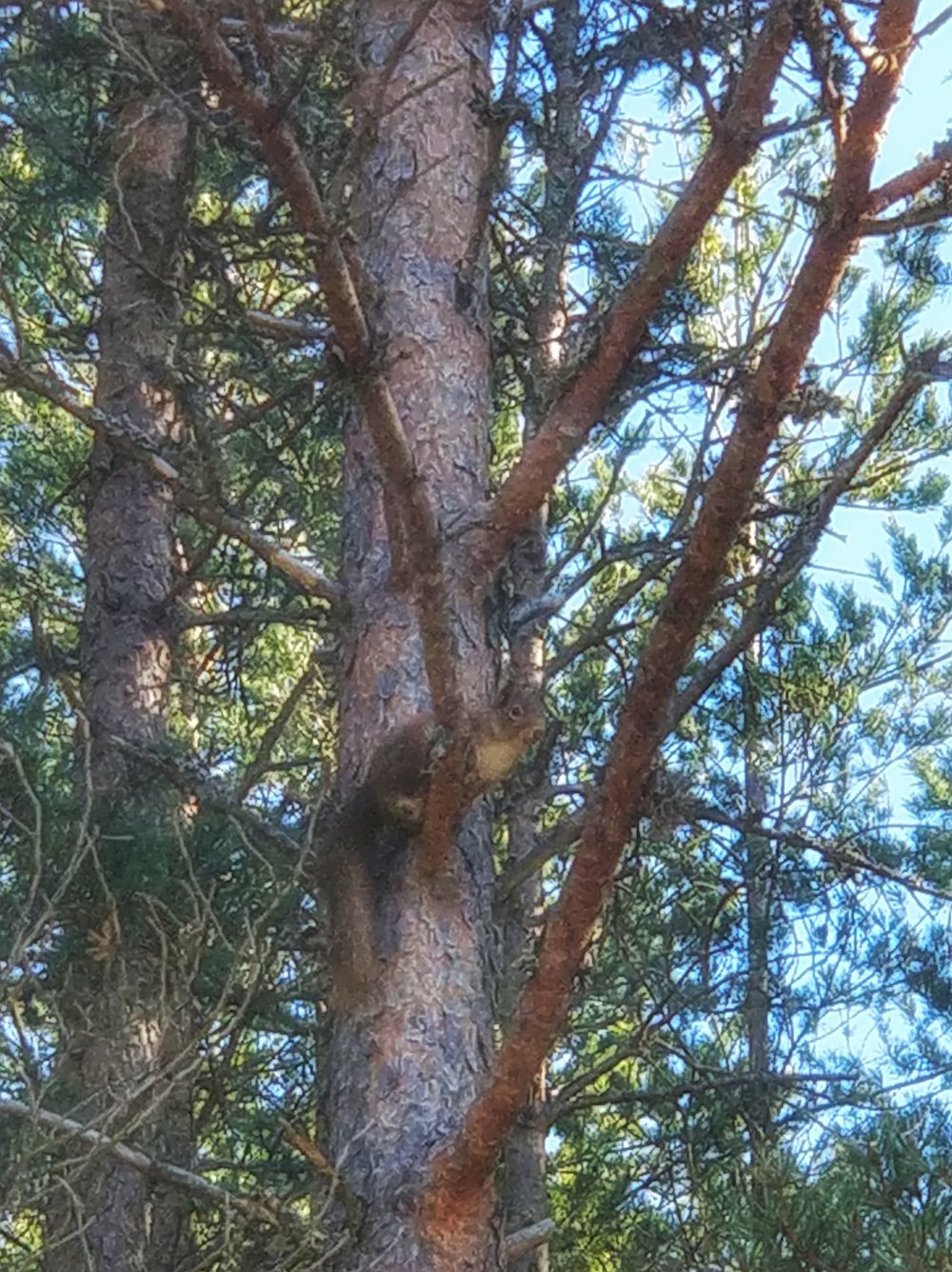 We crossed bridges and small rivers and things were just beautiful. 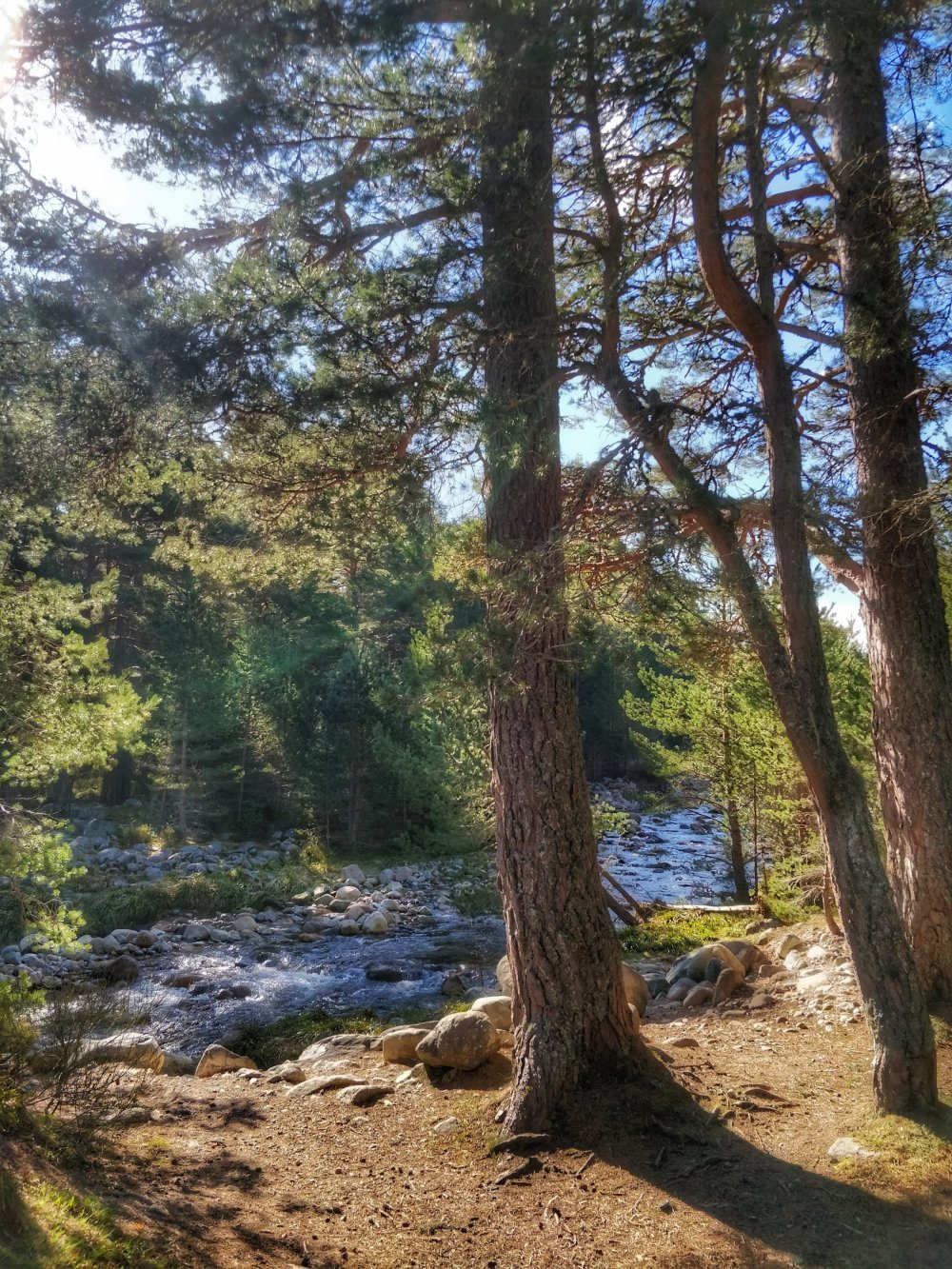 We came to the mystical ‘An Lochan Uaine’ otherwise known as the Emerald Loch and things got extra tranquil.

So local folklore would have it, the fairies do their laundry here which is why it takes on this beautiful colour.

I’ve been here several times before but each time I experience it, it takes my breath away. 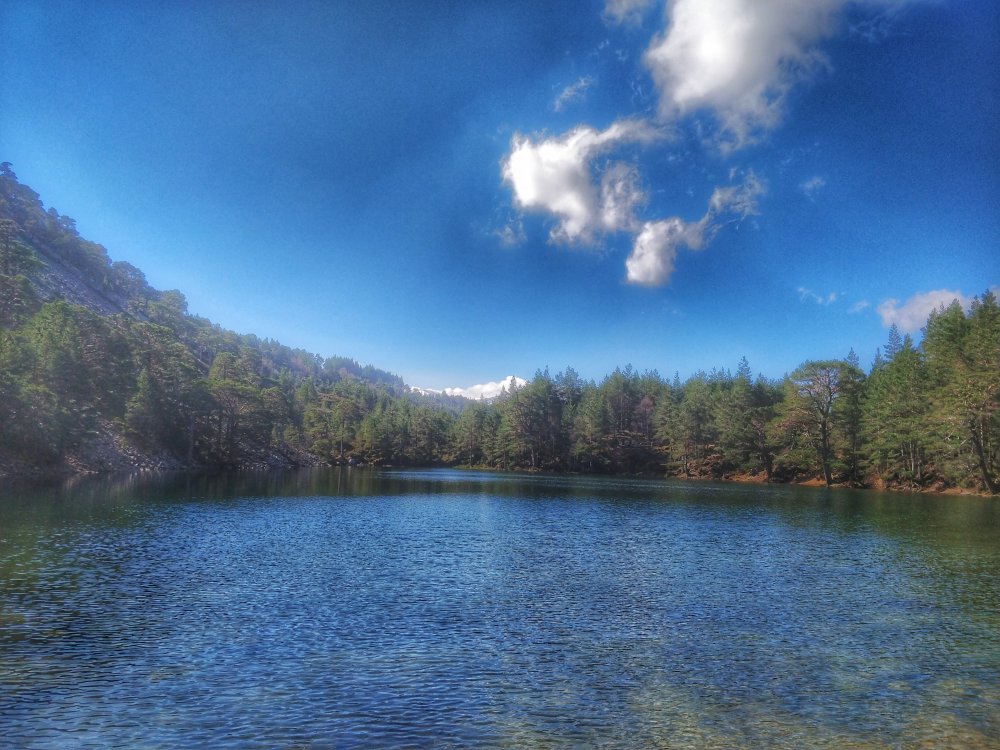 We move on. We continue up the forest track admiring the beauty, everywhere. 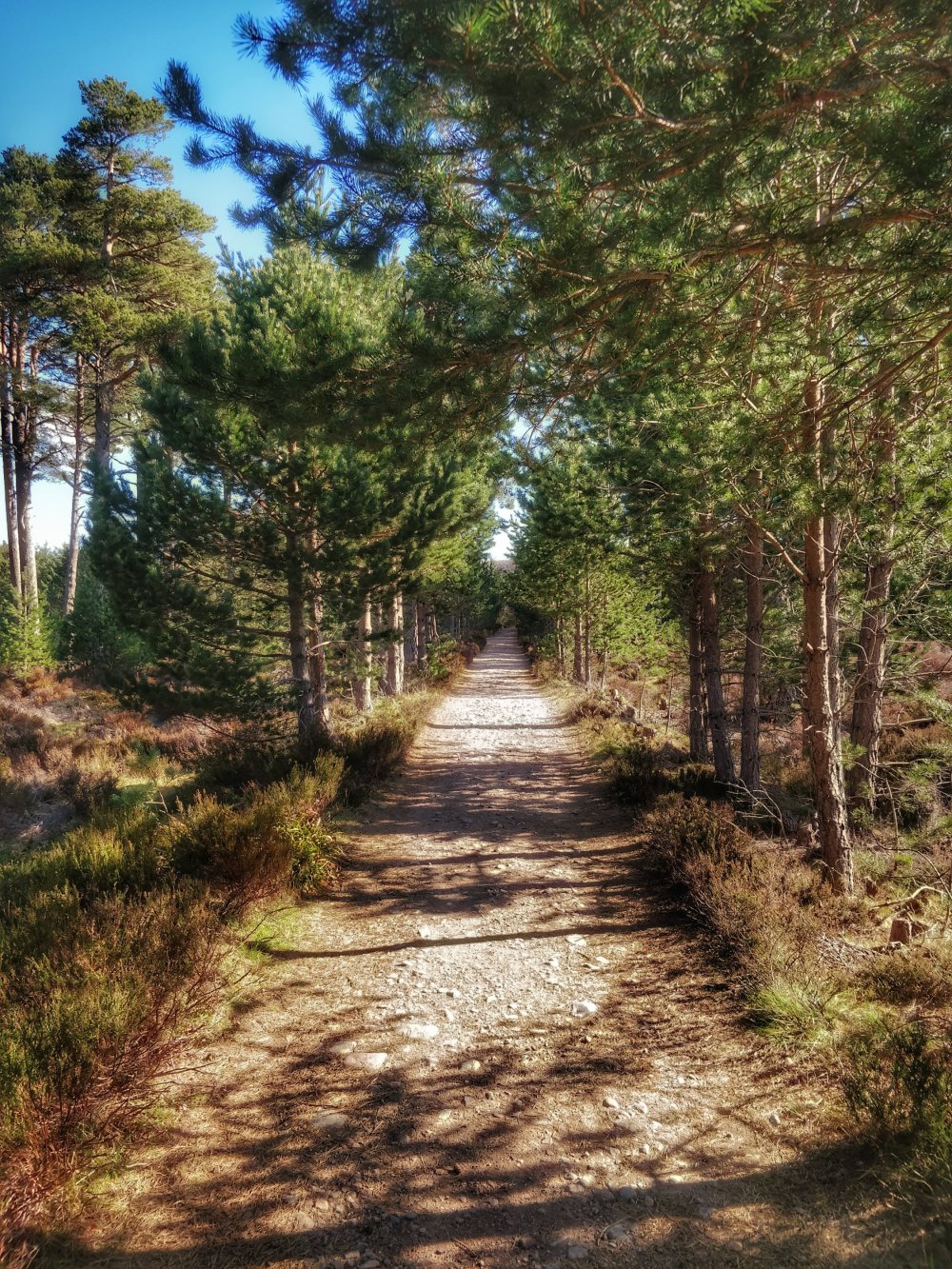 We head upwards, gradually, everything is perfect.

And then! Low and behold the cruel Cairngorms even with stunning blue skies and full sunshine packed us a punch. Winds came from nowhere, they were gale force and they hit us head on.

We battled on and on and on until we were at the bottom of a steepish climb.

It was utterly exhausting, it felt like being in a washing machine at full spin. My head ached, my ears were ringing and it was cold, bitterly cold.

We eventually got a view of the mountain we were aiming for and even in such conditions she was still perfectly beautiful. 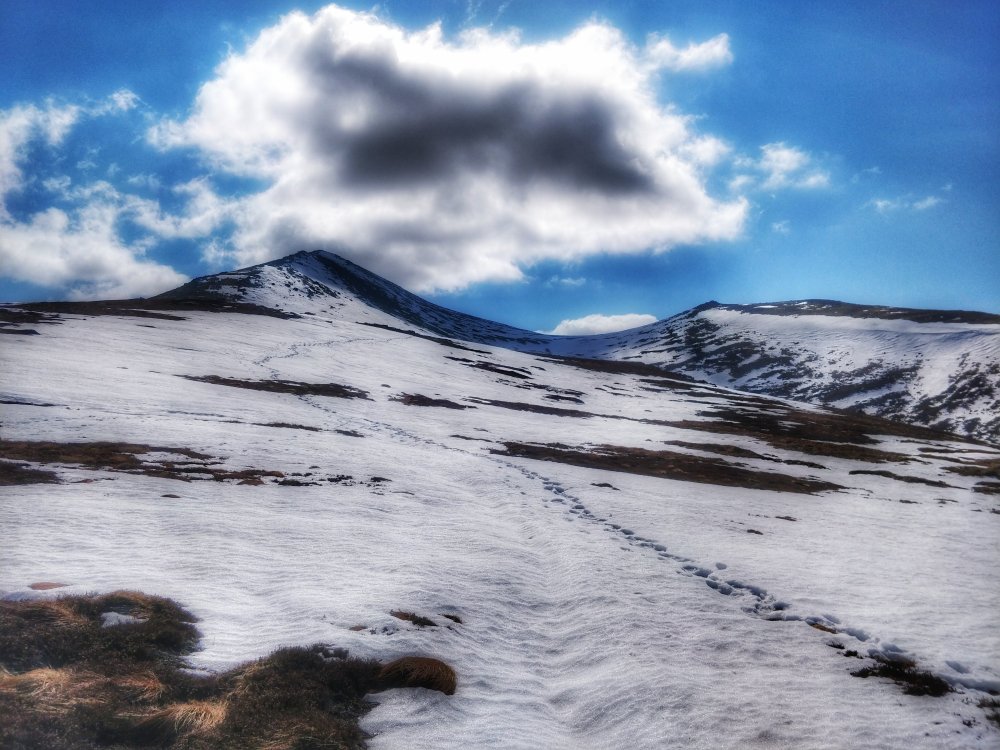 Surely there would be some relief from this wind somewhere. We saw some massive boulders and tried to get behind them for shelter to layer up and get some food as we had been walking for ages and our energy levels were being sapped quickly, we got nothing, no relief what-so-ever the wind was coming in every direction.

As soon as you stopped you were battered again and again and by this time I felt massively bruised.

We slowly moved towards the summit as by this point the wind was pushing us to our knees, mother nature showing us just once again who was boss.

Every step taken feeling like an ordeal, it was utterly exhausting. We hit the top and couldn’t even stand up straight, so got off quickly, (read:not quick at all as we just couldn’t).

The strongest ever gust of wind at 173 mph was recorded at Cairngorm summit on 20th March 1986, not far from where we were standing…I couldn’t even imagine that!

Winds must have been 50mph right now and I hit the wall. Like the wind, out of nowhere I felt sick, faint and suddenly had the shakes…my energy was gone…I was utterly freezing, I have never felt so cold in all my life, to the point that my body ached. If this is what minor hypothermia feels like god knows what a full blown episode would feel like.

By this time my night in shining armour knew things were not good as I became quiet, (read:stopped cursing him), he hauled out all my extra gear from my rucksack and started to layer me up…by this time I had six layers on, including hat, snood, four hoods and two pair of gloves and I still had the serious uncontrollable shakes….what the hell!

After this he then shoved a couple of bites worth of sandwich down my throat (and a couple of pieces of diary milk chocolate, it always does the trick) until I felt better to move. I was still freezing, but the sickness feeling had gone.

I was glad to be heading down but it still felt like we were on steep grounds in high winds and still in a tricky situation. We plodded on and had miles still to undertake. 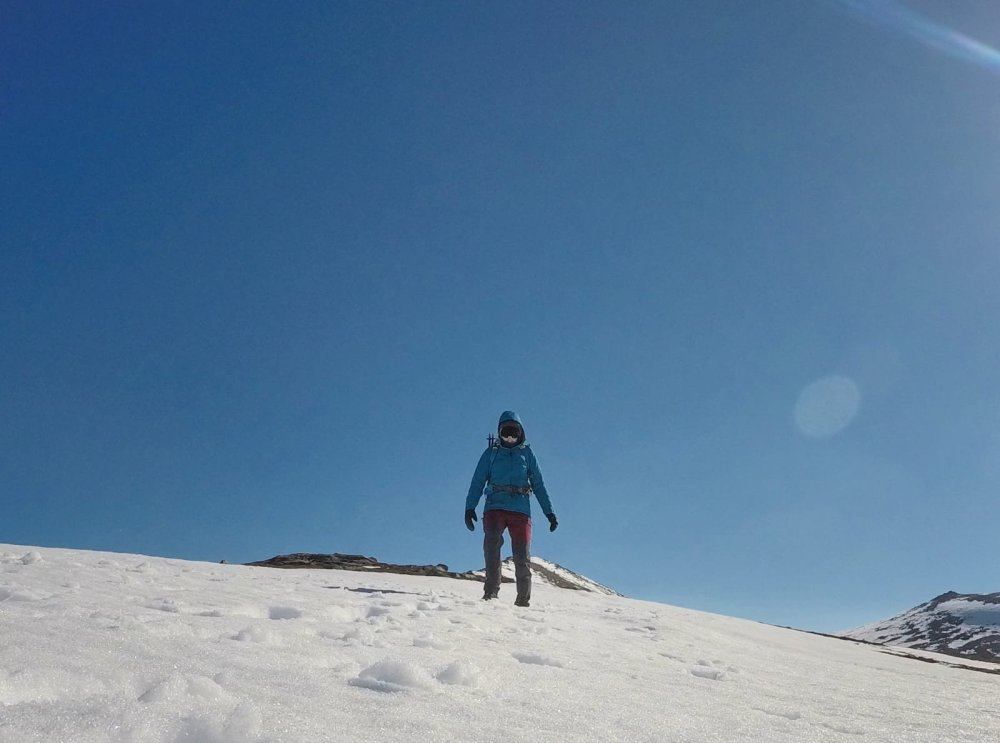 Once of the steep section it was such a relief however the wind continued to howl and we were literally blown off the mountain, all the way down the track until we were almost back on level track in the forest. 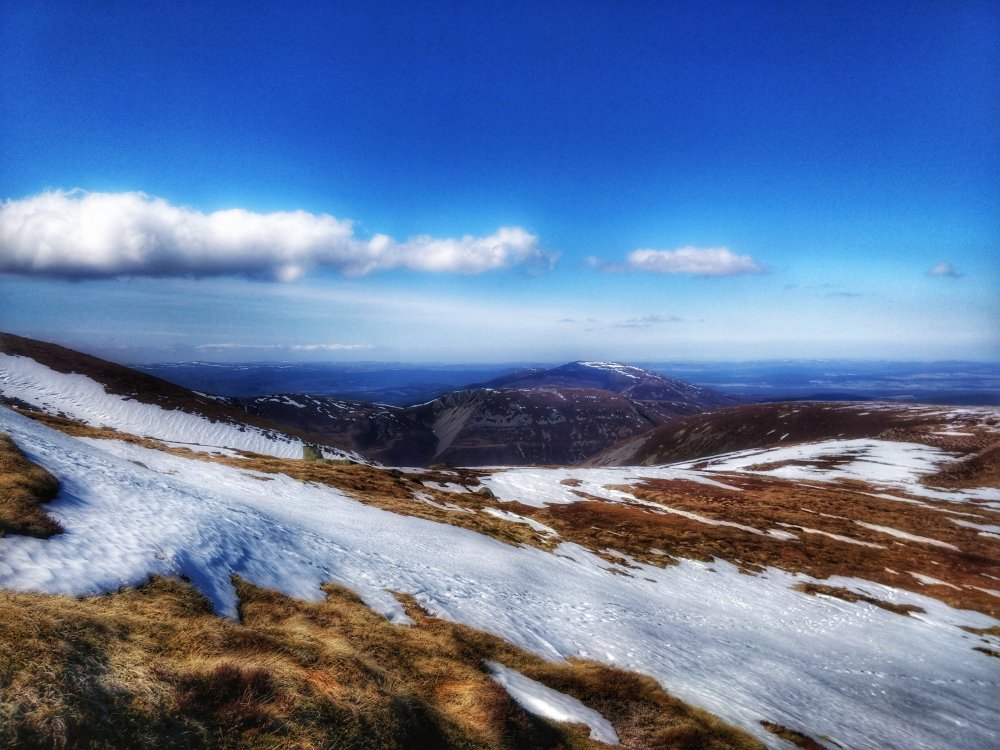 Then just like that, the wind stopped. We felt heat from the sun, we heard nothing other than birds singing in the sunshine.

It was warm, it was tranquil, it felt perfect once more, well apart from the aching back and legs which had been fighting against that force of nature. 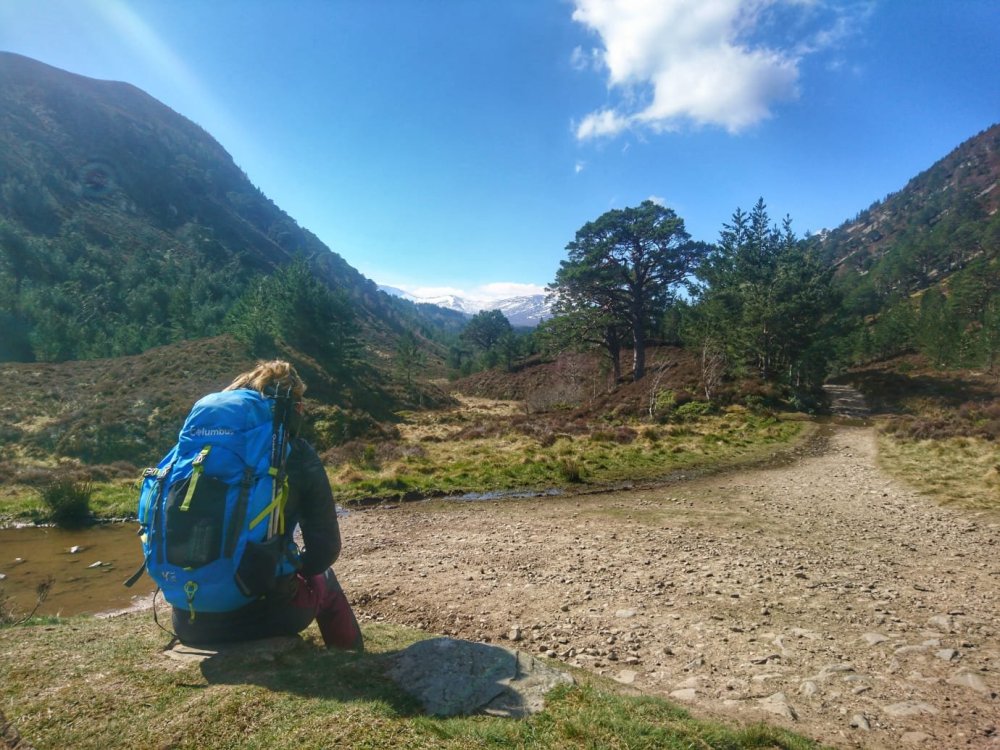 Our walk today took around 7.5 hours and for 5.5 hours we were in that wind…constantly…feeling drained does not even sum up how it felt and would certainly feel like an insult. 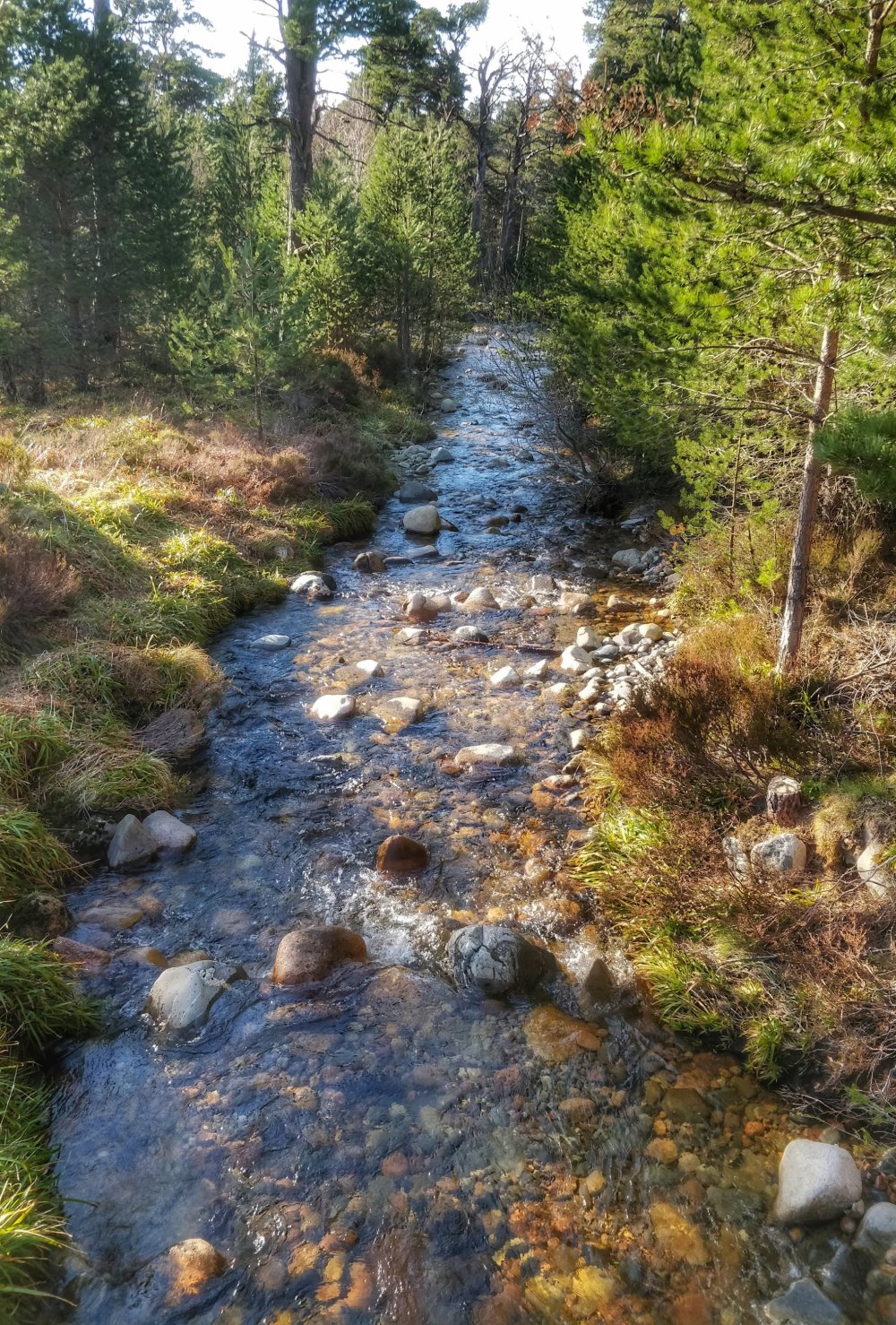 The mountain weather information service stated that the wind chill on the tops of the mountains would feel like between -15/-20 and walking would be arduous against wind speeds of up to 50mph…tell me about it…and it still didn’t make me feel any better!!!

After our big day yesterday we were actually ok this morning on waking up, feeling pretty optimistic due to another good weather forecast…but take that with a pinch of salt!

This meant we could get another days hiking done in the Cairngorms. Nevertheless, it was once again to be windy on summits…you’d think we would learn!

So our plan for today was to undertake the Lurchers Crag Circular, whilst climbing Creag an Leth-choin (Lurcher’s Crag), which has a summit of 1053 metres high.

We parked the car at Cairngorm ski centre and began our walk. 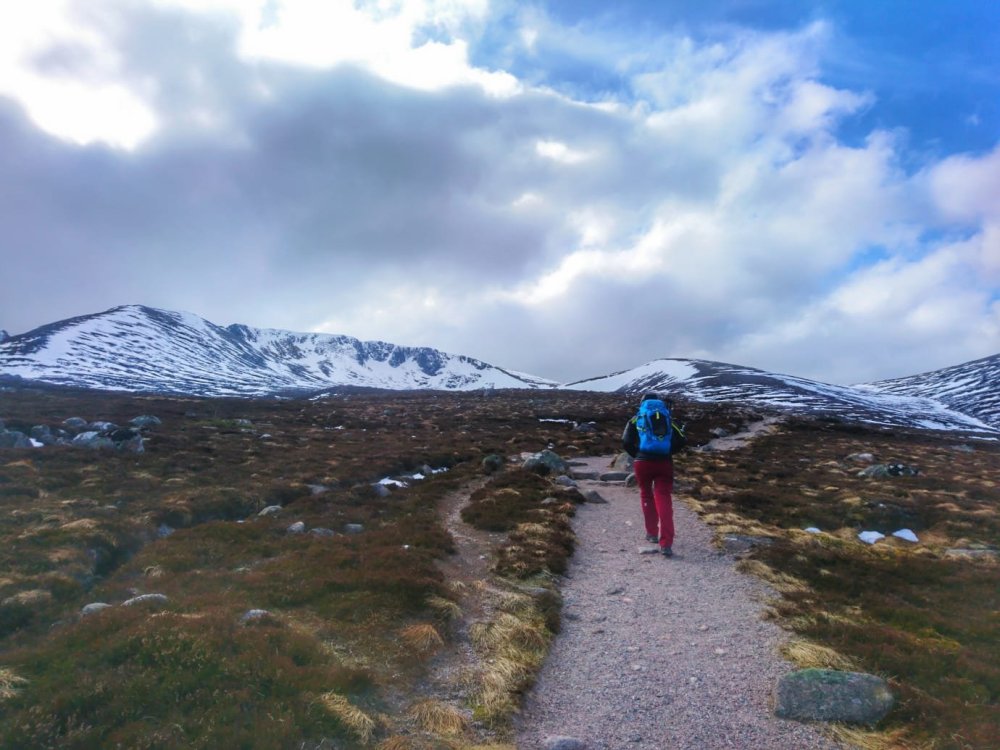 We had only just began and already it was a fantastic walk in with beautiful scenery. We even got to see a herd of reindeer in the distance.

We hadn’t moved too far into the mountains when the wind appeared..here we go again…surely not…but another day and a different battle was to be had although it felt very familiar!

The path should have been straight forward and the walk up epic but once again the wind made things slightly difficult, resistance walking all the way pushing forward with every single step taken. On a few occasions I was literally blown of my feet, clinging to rocks. Never in all my life have I felt wind this strong and consistent. Patagonia ‘s wind didn’t have a look in and felt tame compared to this!

On reaching the plateau it was very wind scoured and covered in snow and ice.

We headed over to an excellent summit with a steep drop down the other side.

The view down the famous Lairig Ghru glacier cut valley as we traversed around to Lurcher’s Crag was fantastic.

We were able to look south down the Lairig Ghru and saw the Devils Point (the small dark peak in the V of the mountains just behind me half way up on photo, right hand side). 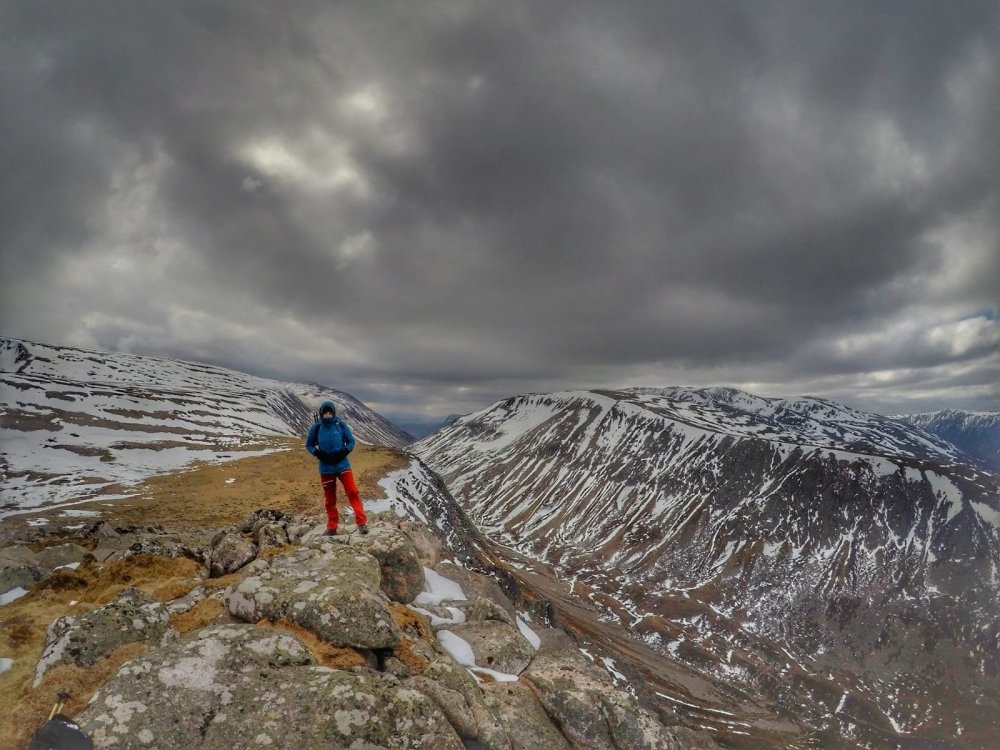 This summit was a great viewpoint, a place which would have been good to linger but not today as the wind was so strong. Instead of following the path downwards and out we decided to cut down the side of the mountain and join the path further down back to the car. 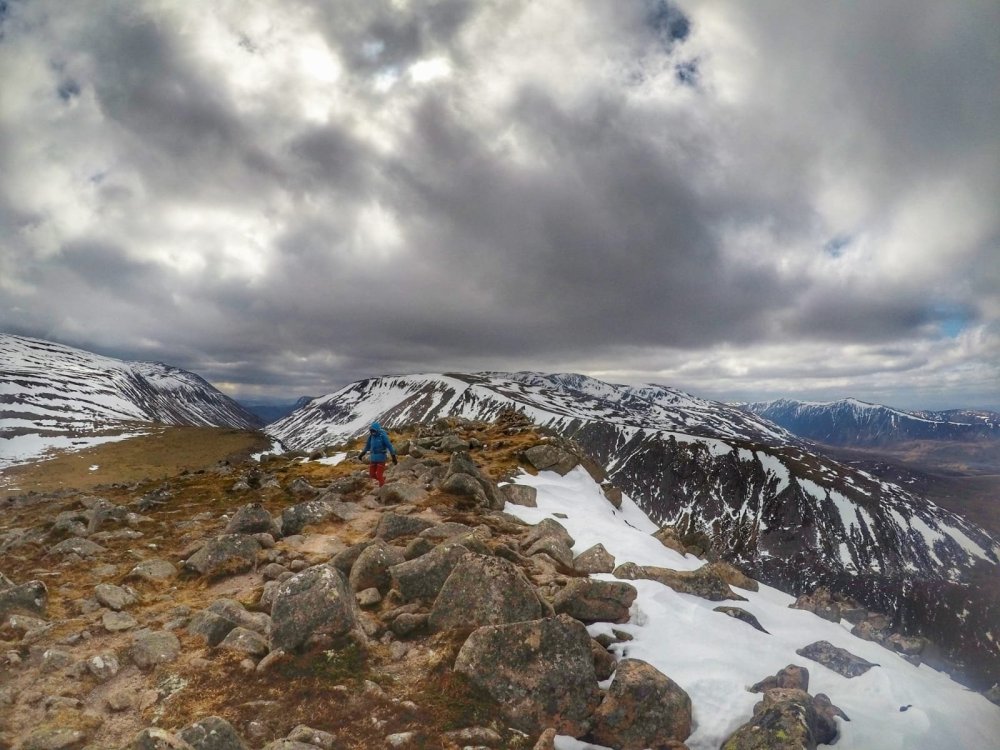 While we were descending the wind stayed strong and by this time I was glad to be heading back.

After crossing a few burns we were back on the path. 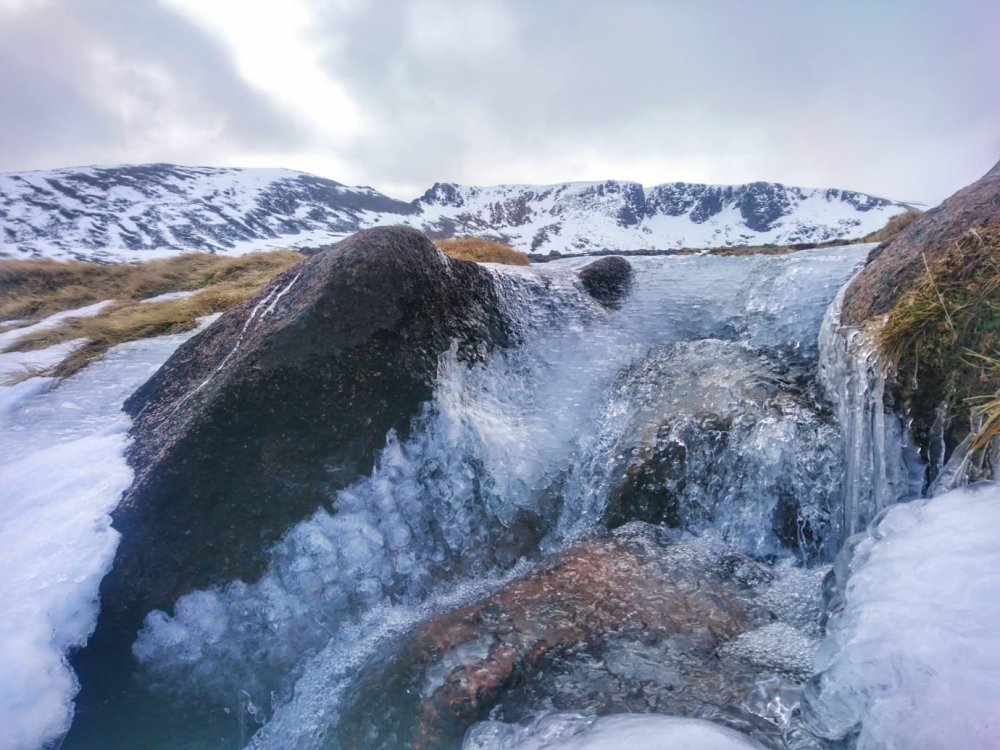 The path out was as nice as the path in and we continued to take in the views even if it was blowing a hooley. Once again mother nature showed us who was boss, she reminded us of her ever presence.

I was looking forward to getting back to that caravan today for sure! It had been a challenging weekend on the mountains and on checking the weather forecast for next weekend in Aviemore…21 degrees with no wind, I kid you not!