I do believe its time for another adventure…so straight after finishing work we were heading for Ullapool.

From home this is about a 4 hour drive so we decided to get the drive done tonight in order to be up in the area nice and early tomorrow as we had plans…there was method to our madness.

So we had originally planned on coming up for the weekend however on looking at the weather forecast the weekend was not looking as cloud free as Friday here in the west Coast of Scotland. If this was to be our window of opportunity we were going for it as this was going to be one epic adventure.

We had planned this journey a few years ago, attempted it and called it off twice due to bad weather.  Weather up here can be that rediculous – this time we were going to get lucky!

Ullapool is situated in the Highlands about a 45 minute drive from Inverness.

It is a picturesque fishing village nestled between Loch Broom and the mountains of Wester Ross. 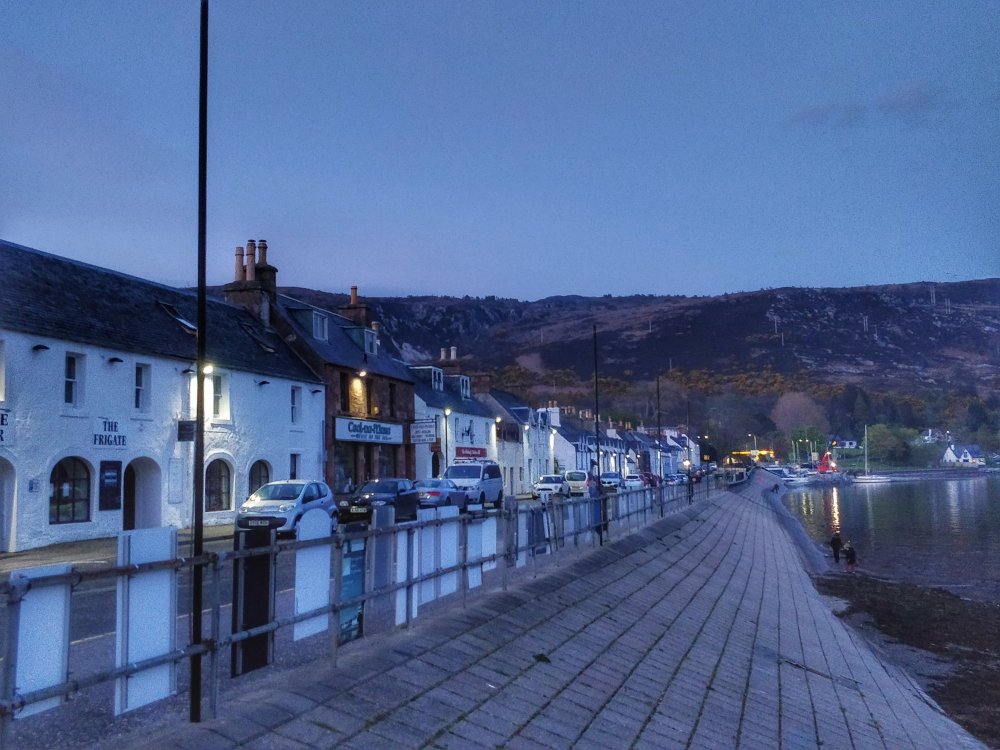 Ullapool also has a pretty port and is a destination in itself but it’s also the gateway to the Western Isles. 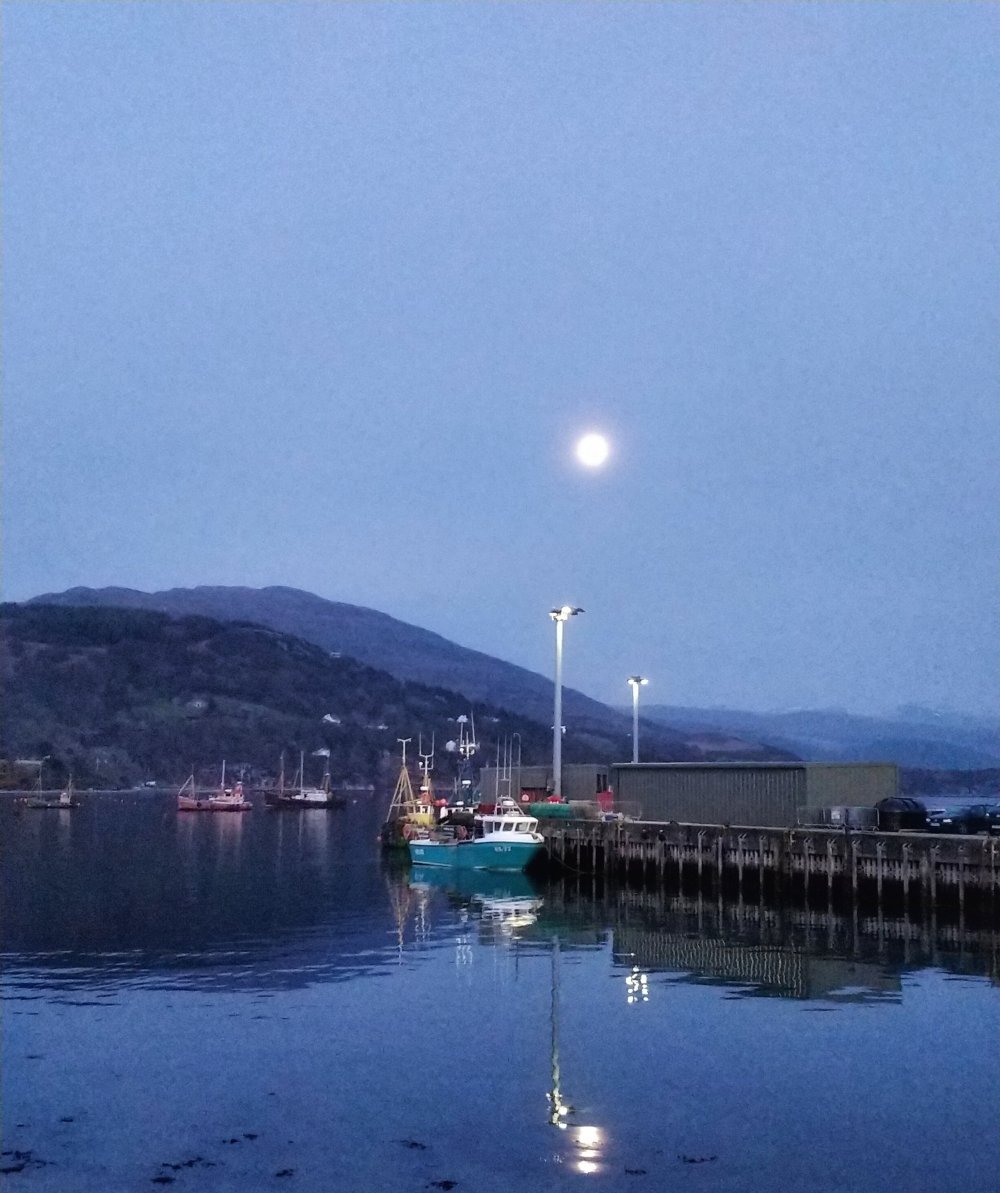 As we were arriving so late tonight we checked in at a hotel then wondered outside.

The evening was lovely, no wind, just a still calm night with warmth in the air…could it be true!

Pictures do not do this justice and cannot capture how special this sunset was. I have never, even whilst travelling abroad, saw such a spectacular sunset…it was quite magical and breathtaking…nature once again at her best.

I put my camera away capturing the moment in my memory……

We wondered down to the harbour area which offers a row of whitewashed cottages, looking very picturesque and finished our evening off sitting outside in a quiet beer garden.

The area has outstanding scenery ranging from beautiful woodlands to the lovely coastline right up to the wilderness of the high peaks, beautiful, rugged and remote.

There is also a huge range of activities here for everyone, from hillwalking to whiskey drinking!

Maybe we might get lucky and be treated to a view of the Aurora Borealis (Northern Lights).

The main reason on being up here is to climb Suilven.

Suilven sits in the North West of Scotland.

The mighty Suilven is probably the most famous of all the Assynt mountains a long, rocky ridge rising straight up from sea level.

Suilven may only be 2,389ft high (731m), but it’s remarkable cutline makes it one is Scotlands best known and most easily identified mountain.

Ben Nevis is nearly twice its height but once seen, Suilven is a hill never to be forgotten.

We’ve been to Assynt before but once again it’s a jaw dropping experience, the landscape absolutely stunning.

There are several ways of approaching Suilven. As mentioned it’s not a high mountain but it’s a remote lump of rock carefully placed in the middle of a lochan-strewn wilderness that stretches for miles in every direction. It’s certainly not an easy day out.

It’s main characteristic for me is it’s remoteness but for others that’s it’s principal drawback.

Getting to Suilven takes effort and the walk in from Lochinvar can take most of the day. Today we’re going in by canoe, over Loch Veyatie.

So we launch our canoe in a remote small community called Elphin, only a few houses are scattered about in the area.

We meet a friendly local who allows us to park our car at the back of her house for 24 hours and we set off.

Now the only drawback is we have to carry all our gear plus canoe half a kilometre down a farm track to the edge of the loch in order to launch, this involves walking through a herd of Highland cattle. 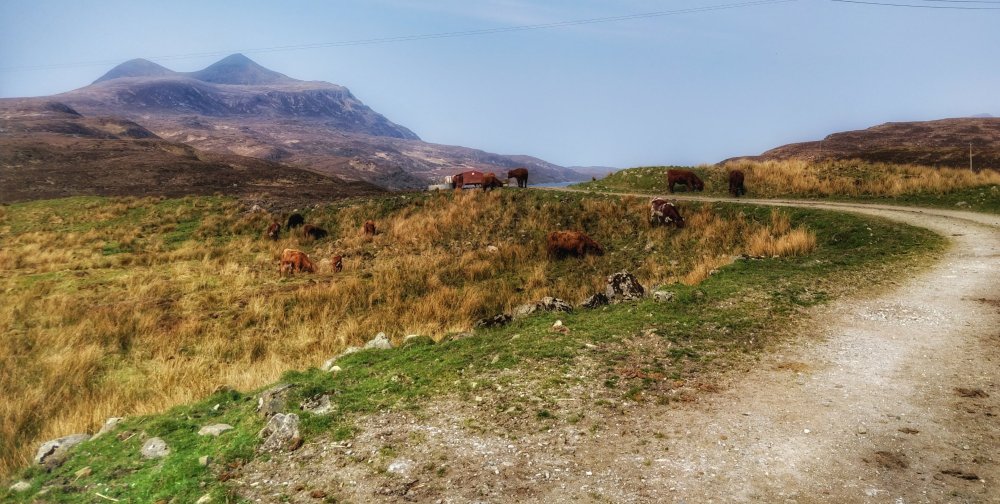 Now these cows were very inquisitive and had calf’s…not a good move…passing them made me slightly nervous (read: absolutely petrified), but with a paddle in hand for extra protection I need not have been worried as they were placid.

We were so close that we could smell their breath!

It felt like a long slog down, it was hot, things were heavy but we got there to the water’s edge and the view made things worth while. Our extra effort was already paying off.

After setting up we launched and started our great adventure at 10.30am, paddling down the loch in idyllic surroundings, listening to nothing but the sound of water. 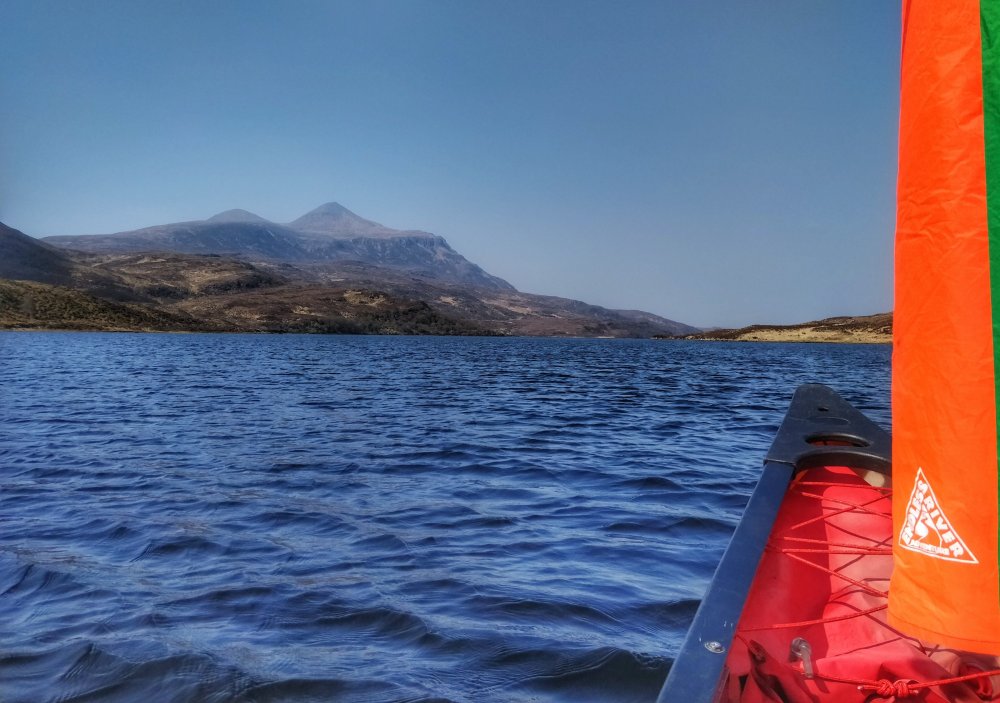 We stopped off around the halfway mark to pick up some kindling for our fire tonight as we planned on finding a secluded spot to wild camp. 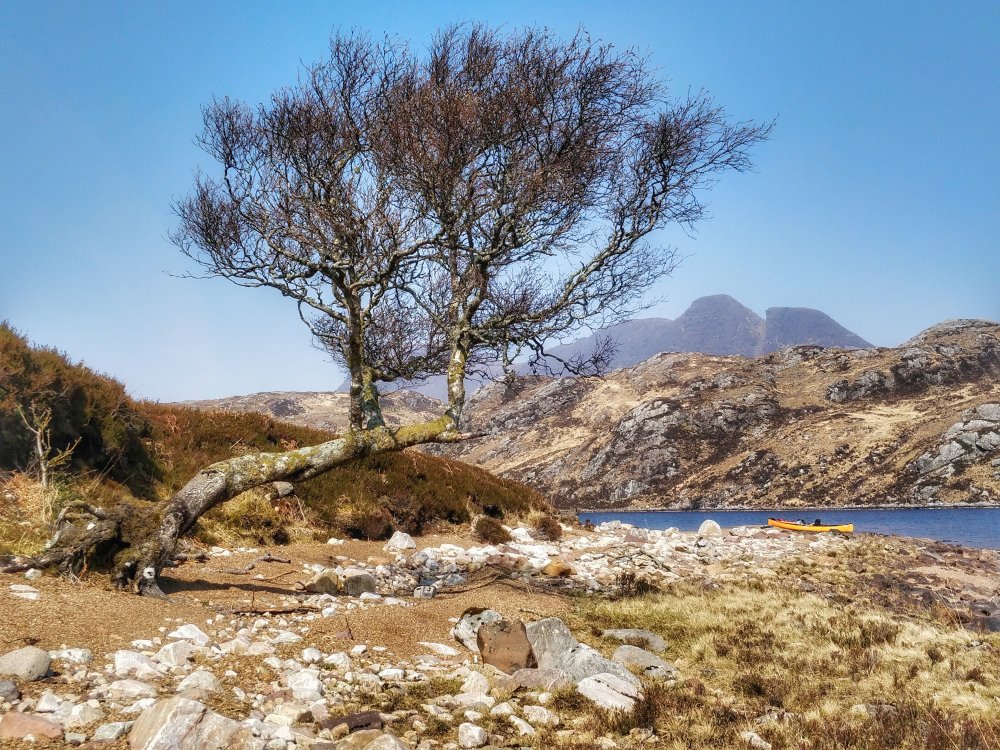 Our paddle took 1 hour and 45 minutes then we arrived in paradise…we saw our perfect pitch that we were calling home for the night.

It sat on a flat little mound at the water’s edge, with Suilven as our backdrop. It was meant for us! 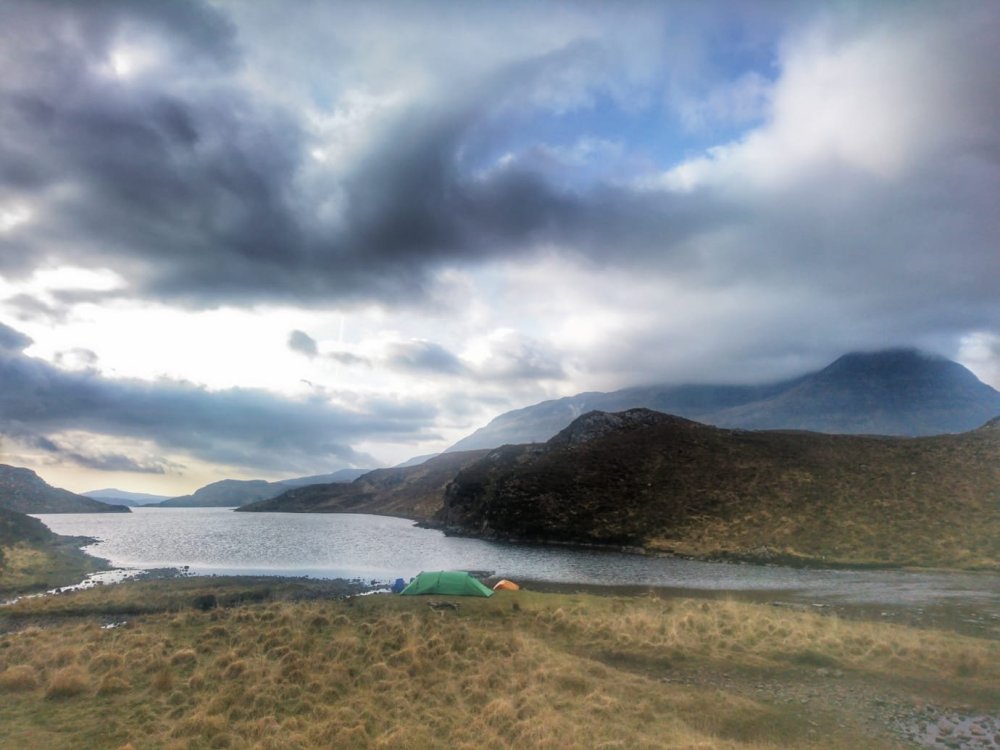 We emptied the canoe, set up ‘home’, sorted out gear then took off to summit Suilven…it already looked exciting.

The walk to the base was a boggy slog over open moorland. 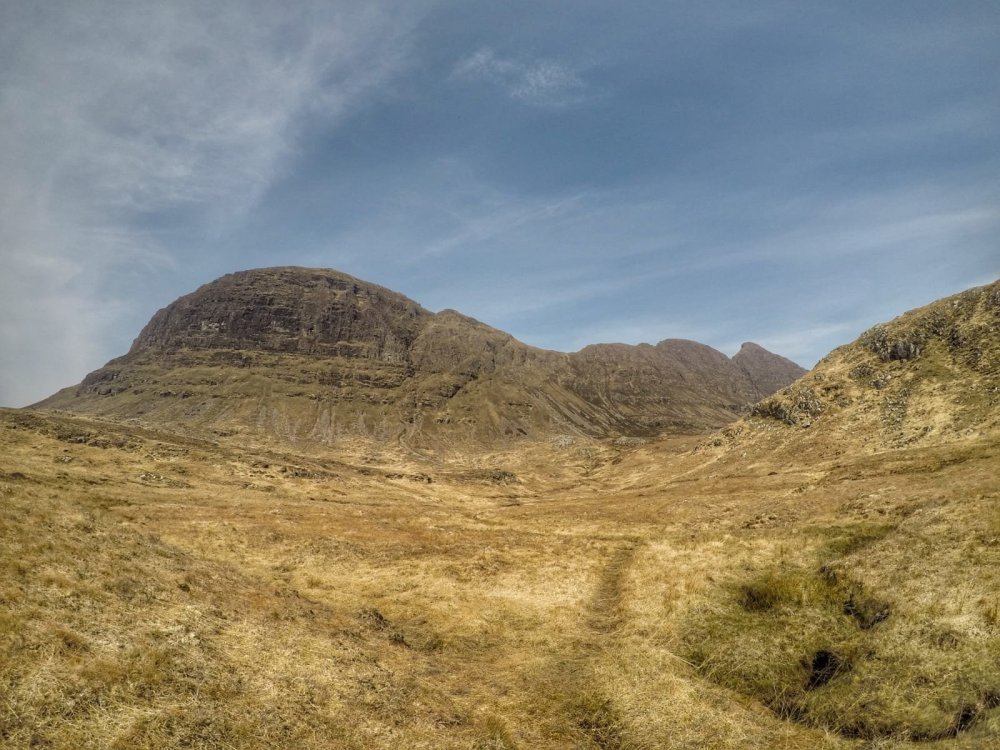 This took us just over an hour and got us to the base of the hill. From here we would decide which route to take up it.

My preferred route was to walk around the base and approach from the easier north side which would firstly take an hour to get to before beginning the climb.

Mountain man’s fantastic idea which was clearly brilliant was to head up the steeper harder south side and from where we were standing it looked impossible.

Trying to convey my distain for this option required lots of ‘choice words’, but they fell on deaf ears….and we were clearly heading on the path I did not want to take!

When viewed from here, Suilven looks magnificent and impossible!

At the foot of the mountain, I started to wonder just how we were going to get up the cliff face.

But up we go…following a small very steep gully we climb up the face of the hill.

As we reach the bealach (I thank my lucky stars) the views open up all around.

On a clear day you can see Skye and the Western Isles….today was a clear day.

There are two summits to this mountain. The highest one on the western ridge and a lower slightly trickier summit on the eastern side. 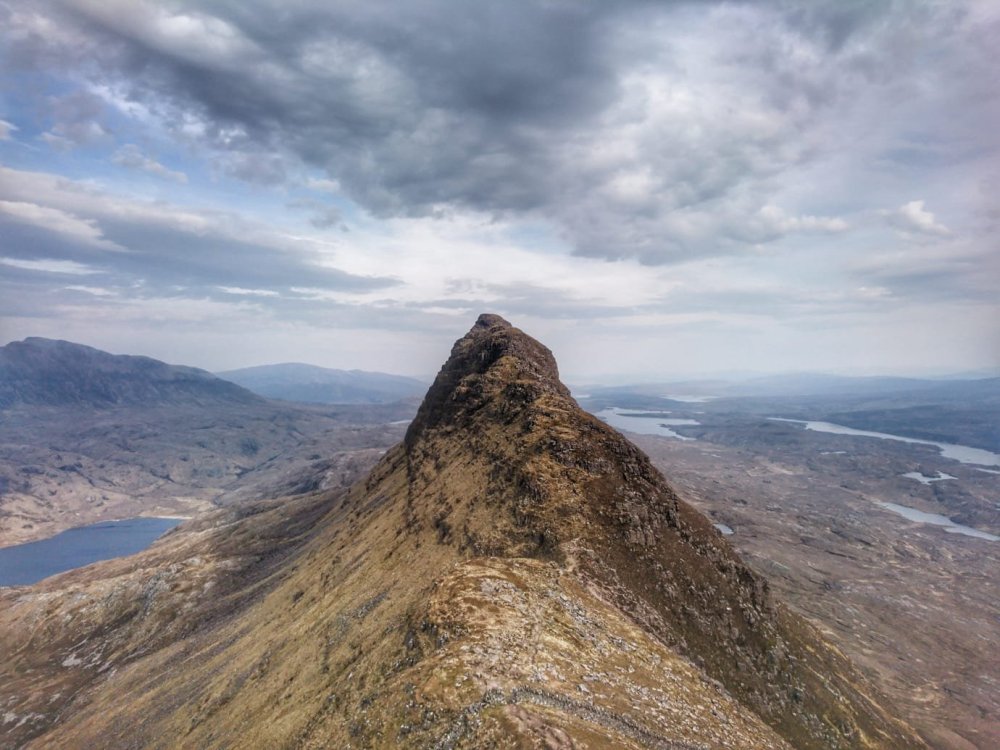 Both of these summits require plenty of scrambling , with narrow ledges and plenty of exposure to the sheer drop to the bottom of the mountain.

It’s certainly not for the faint hearted or those with a bad head for heights.

We headed to the Western ridge first which provided amazing views over the western isles.

With the sun starting to go down we wanted to be off the hill before it got dark so we quickly scrambled to the east summit where views were just as dramatic.

With the sun setting it was time to get out the poles and head down the steep, tricky decent, which I was not looking forward to – again Andy’s preferred choice!

After about 45minutes of loose rock and scree we made it to the base of the hill where the boggy flat moorland was a welcome sight.

The walk back took us 1 hour and we reached our camp just as darkness fell…it was exactly 9pm. 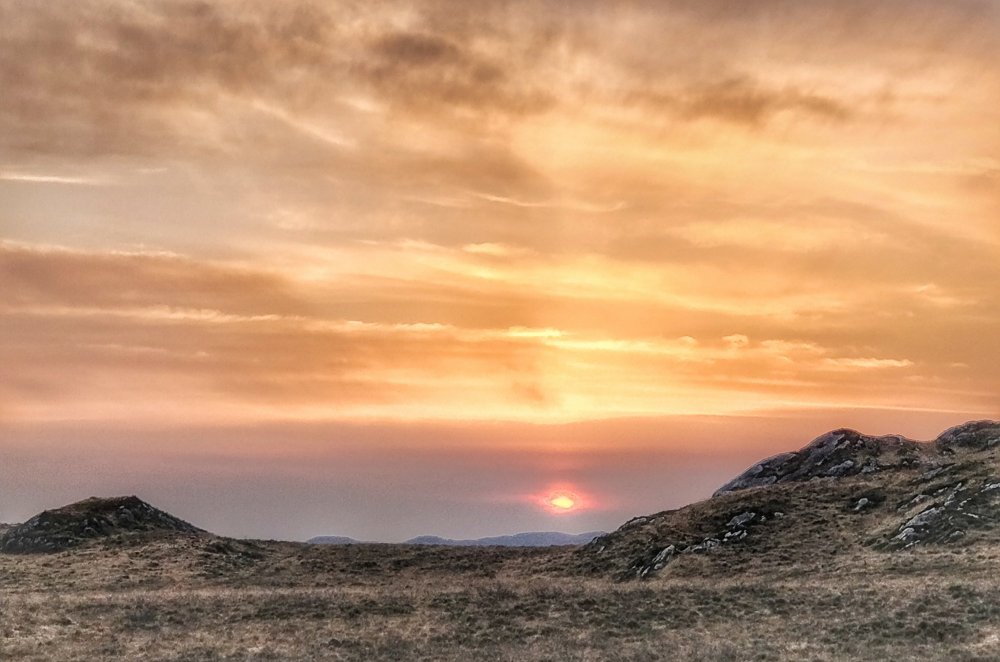 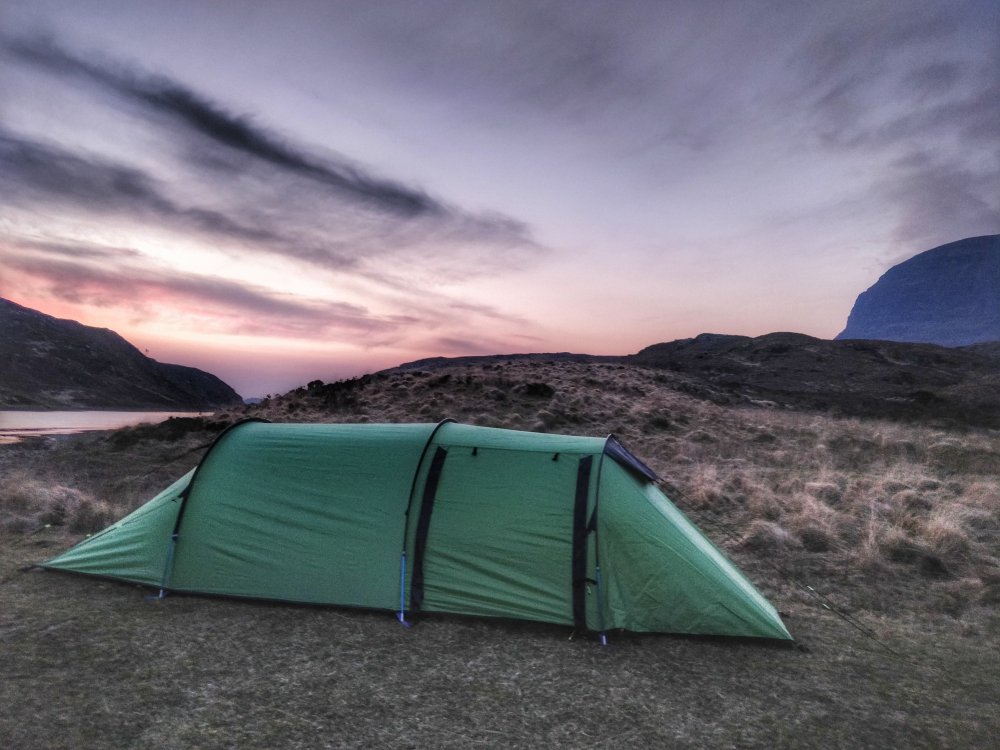 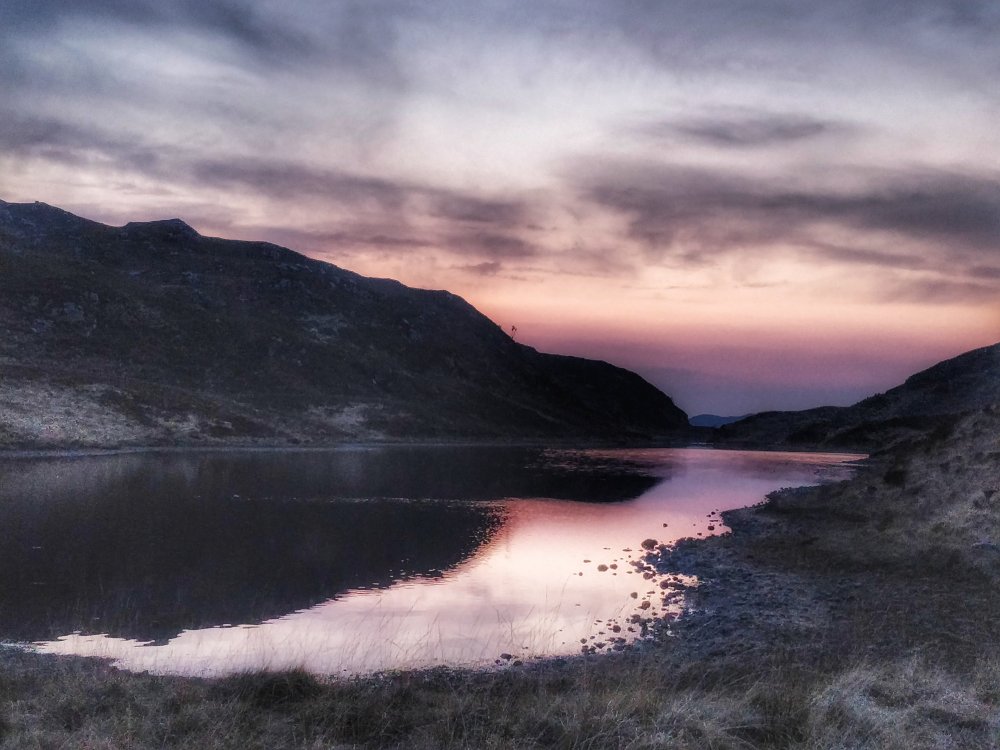 No rest for the wicked as it was time to get the camp fire on and tea cooking.

The evening was stunning, warm and still and best of all there was no midgies…a rarety in Scotland!!

We sat by the fire, watching the sun eventually disappear and the most amazing full moon appear….nature always manages to amaze me.

We woke bright and early to the sound of birds and a slight wind, this wind slightly concerned me as it was a long paddle out and could be longer if paddling against the wind.

On exiting the tent and looking at the water it was going to be behind us helping us on our way as we had rigged up our canoe with a sail. Who said I didn’t like wind!! 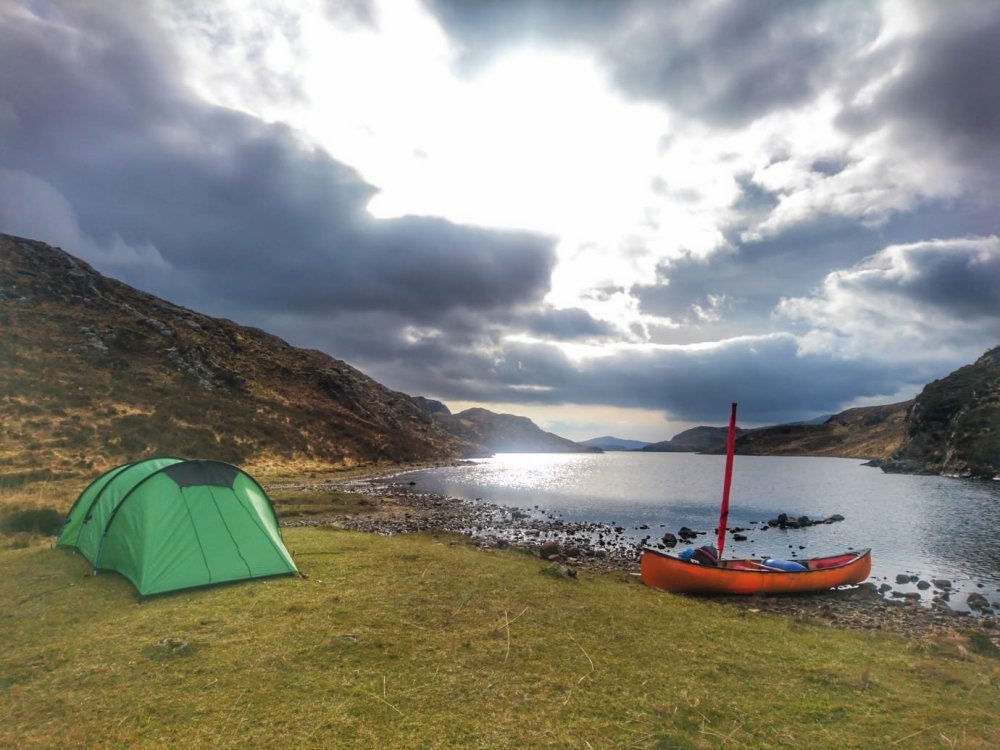 We made breakfast which consisted of porridge and fruit had a coffee then packed up our gear…It was time to leave paradise.

Suilven looked very different today, with her head in the clouds.

Although it was warm, today had a very different outlook.

The journey started off calmly but as we reached the end of the loch we were going over pretty big rollers, if we had went slightly sideways we were capsizing.

We managed to sail all of the way back with the odd paddle, the wind actually helping us today and we reached our destination within the hour…wow. It was now 10.40am, our adventure complete in 24 hours.

We then had to carry all our gear up hill, through the cattle who were once again all over the track we needed to walk through. 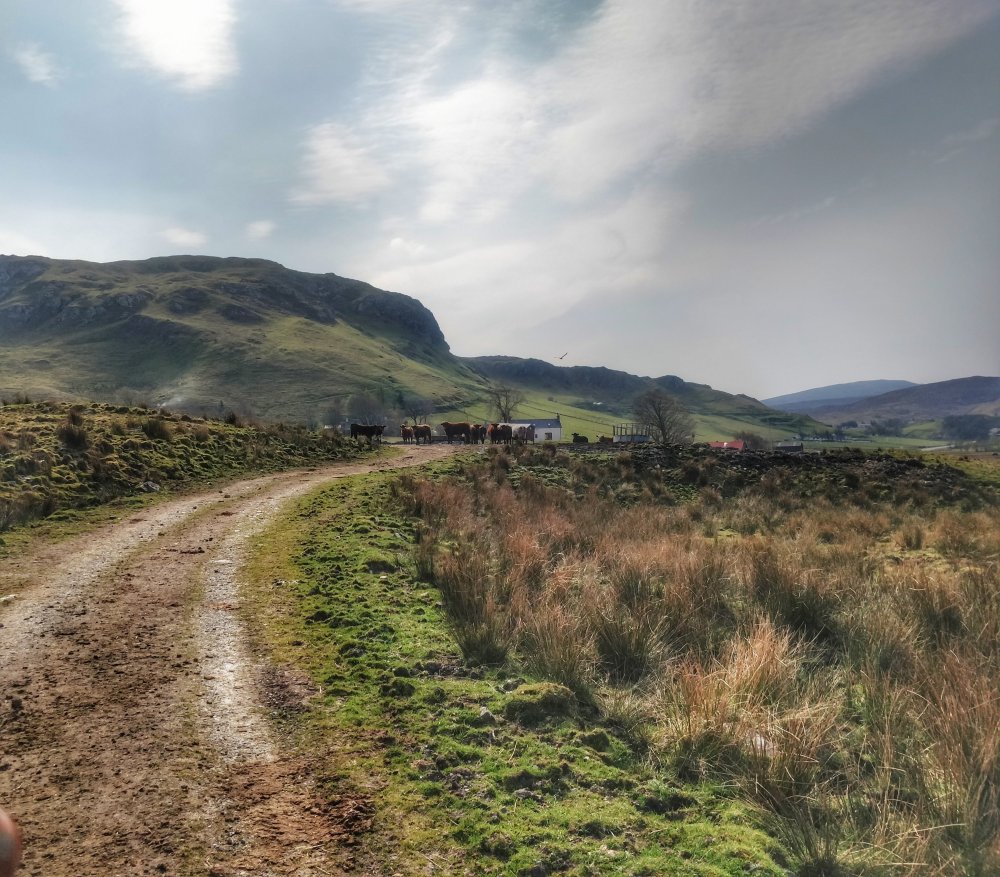 Putting on a brave face we walked straight through the middle of them, I held my breath. We made it.

Packing up the car our adventure was almost at an end.

On the road back we stopped at a place called Moine Thrust which is a linear tectonic feature. The Moine Thrust Knockan Crag is the easiest place to see this, it lies in Inverpolly Nature Reserve.

By studying the Moine Thrust, geologists have been able to learn a lot about the way in which the world has changed over the centuries, and this one is the oldest untouched and most complete geological records in the world.

In the 1800s two geologists Peach and Horne did careful survey work here which confirmed that old rocks were indeed sitting on top of younger ones (usually the other way around). Continents had collided, thrusting great slabs of rock one upon the other to create mountains. These were vital discoveries for science. It took them 14 years to draw up their conclusions. 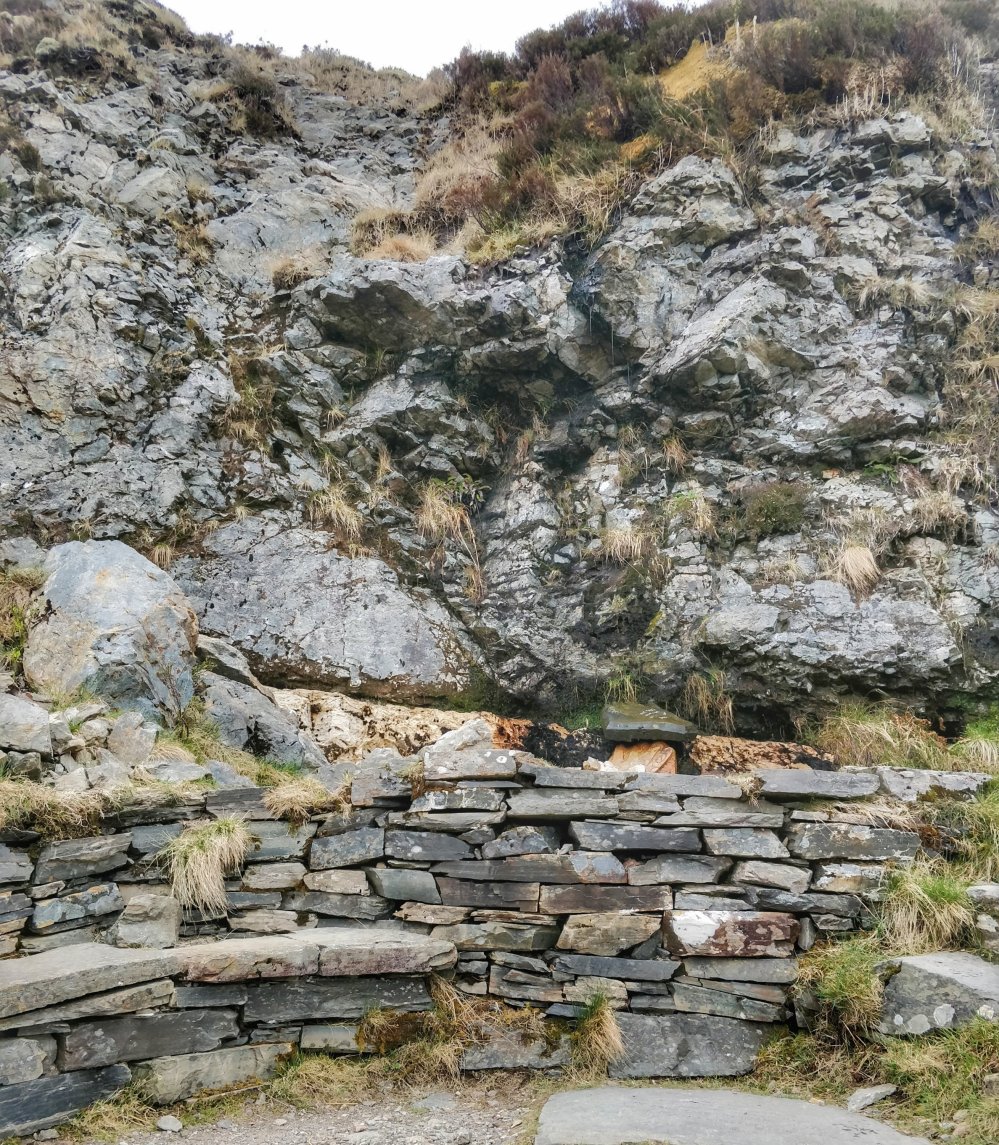 It also meant that some respected geologists were proved wrong!

Peach and Horne’s work confirmed the incredible forces that formed the rocks at Knockan over million of years. This changed the way we understood our planet – and some believe it was as crucial to science as Charles Darwin’s discoveries on evolution!

Did you know that the Scottish Highlands were part of the same mountain chain as the American Appalachians until the continent split apart about 60 million years ago…this was when the North Atlantic Ocean began to open up…..mind blowing!

This area is so beautiful. Legend has it that the old Norse gods came to this area to practise mountain building. As you look over the landscape to the west, its maybe not so difficult to believe! 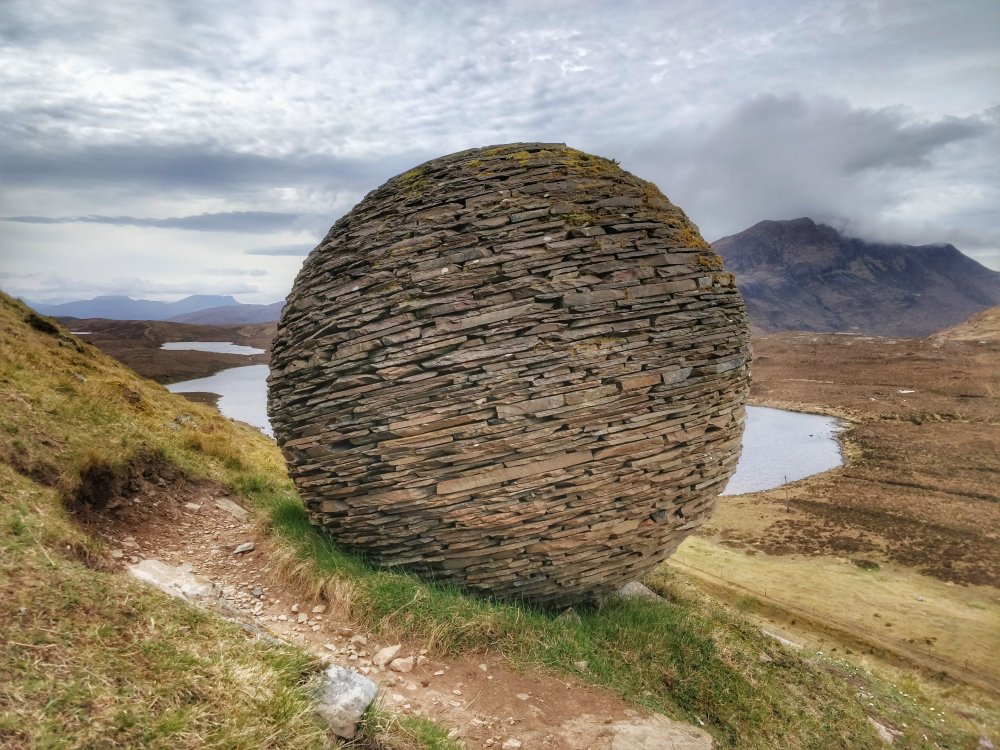