So this am we were up bright an early.

Breakfast was 2 fried eggs with bread and porridge.

Today I had an iffy tummy…something was going on. I felt pretty squeamish also but forced down the two eggs and a slice of bread. I tried my hardest to eat the porridge but today the texture just wasn’t agreeing with me so I left it.

The plan today for better acclimitasation was to spend the day climbing to the lower end of Lenz Rocks, the rock band which goes straight to the East Summit.

Straight away the crampons were on. 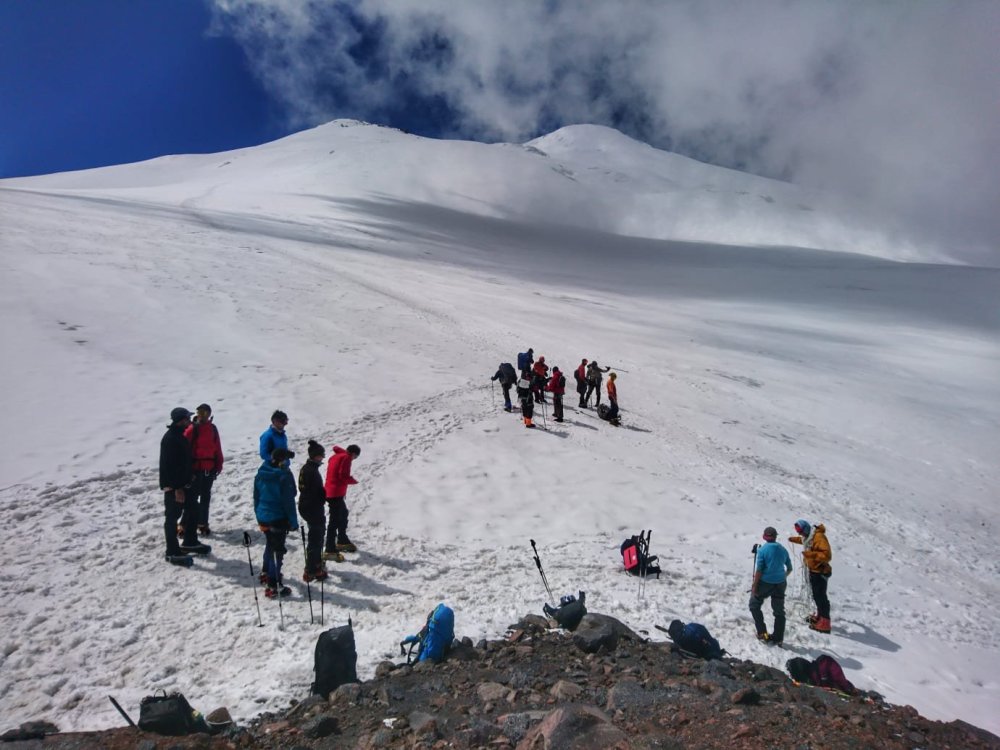 This route brought us onto some moderate glacial terrain, then we went up pretty steeply, pretty quickly for four solid hours until we ascended the snow slopes to Lenz Rocks. 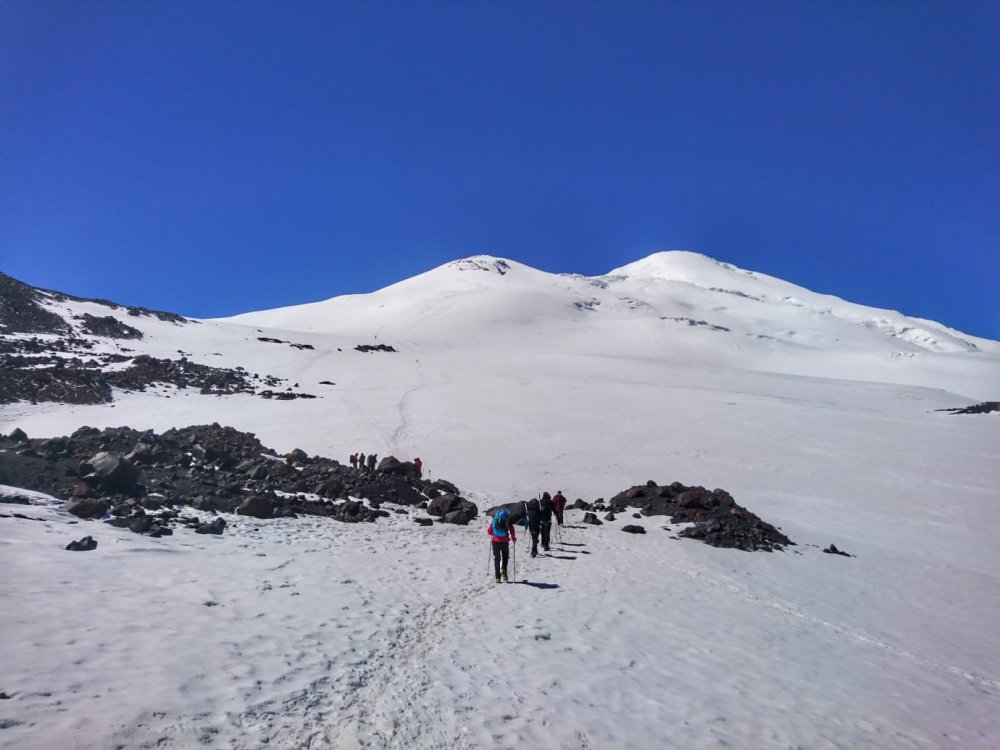 The ascent on snow was difficult and steep and in just over 4 hours we came to the lowest part of Lenz Rocks (4800m). 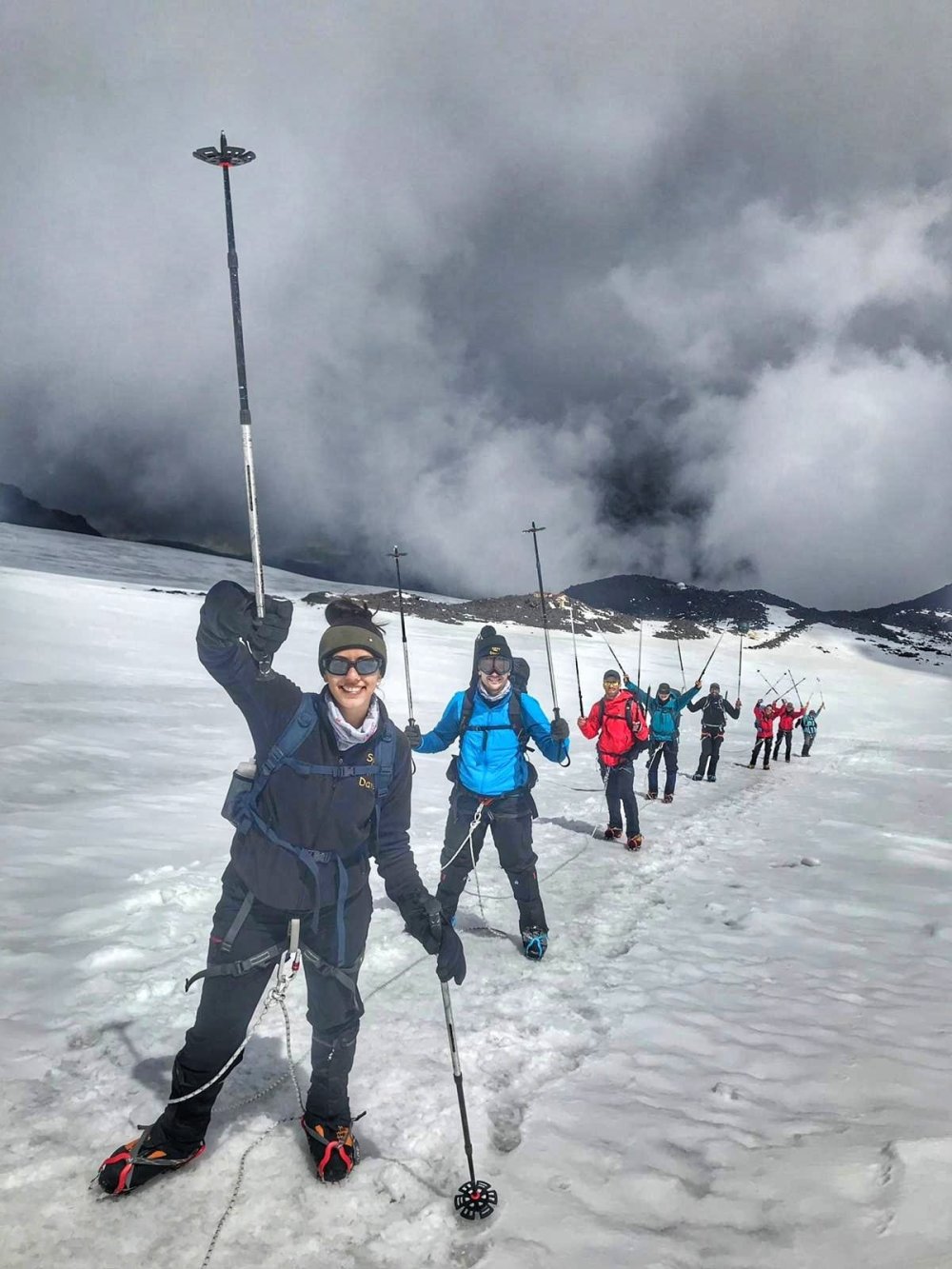 The descent then took us approximately a further 1.5-2 hours…it felt like a very long steep descent. 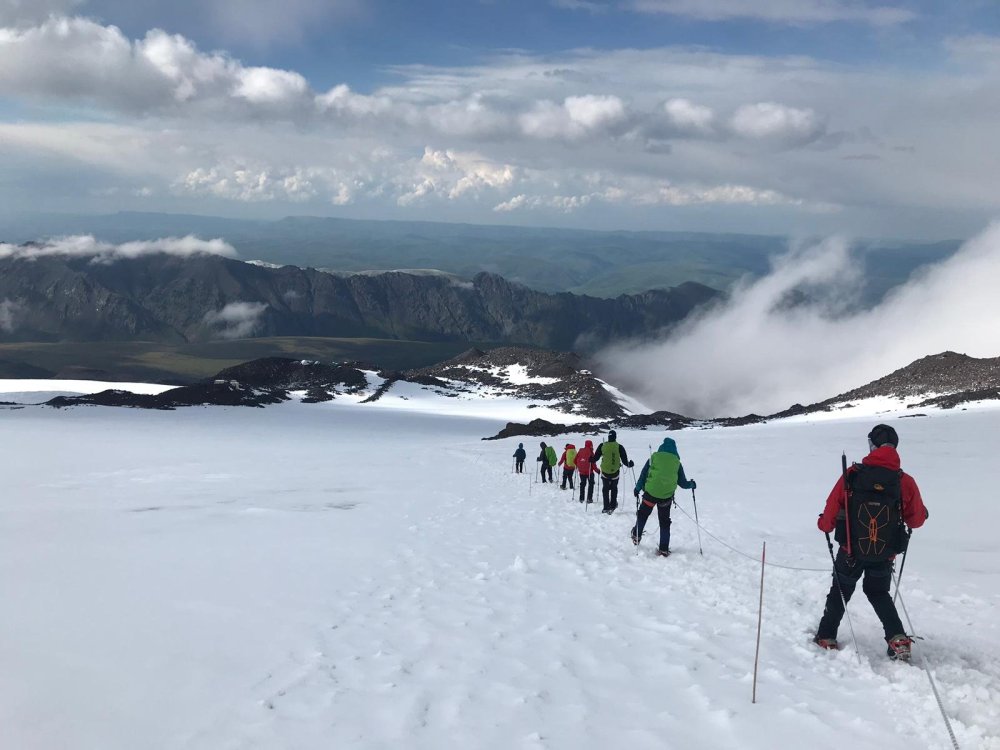 It felt like mental torcher actually, your just constantly having a mental battle with yourself aswell as a physical battle of getting to the point you need to get to….it’s exhausting. 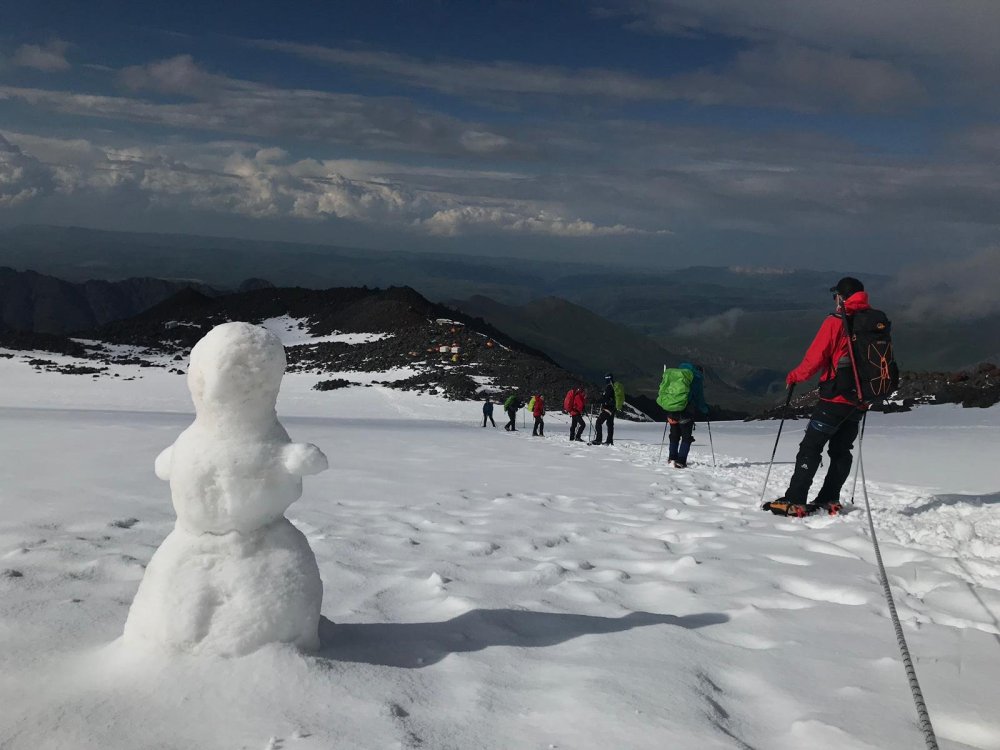 Until you’ve been to high altitude and try do anything as physical as this, and this was physical to a high level, you can’t really understand. 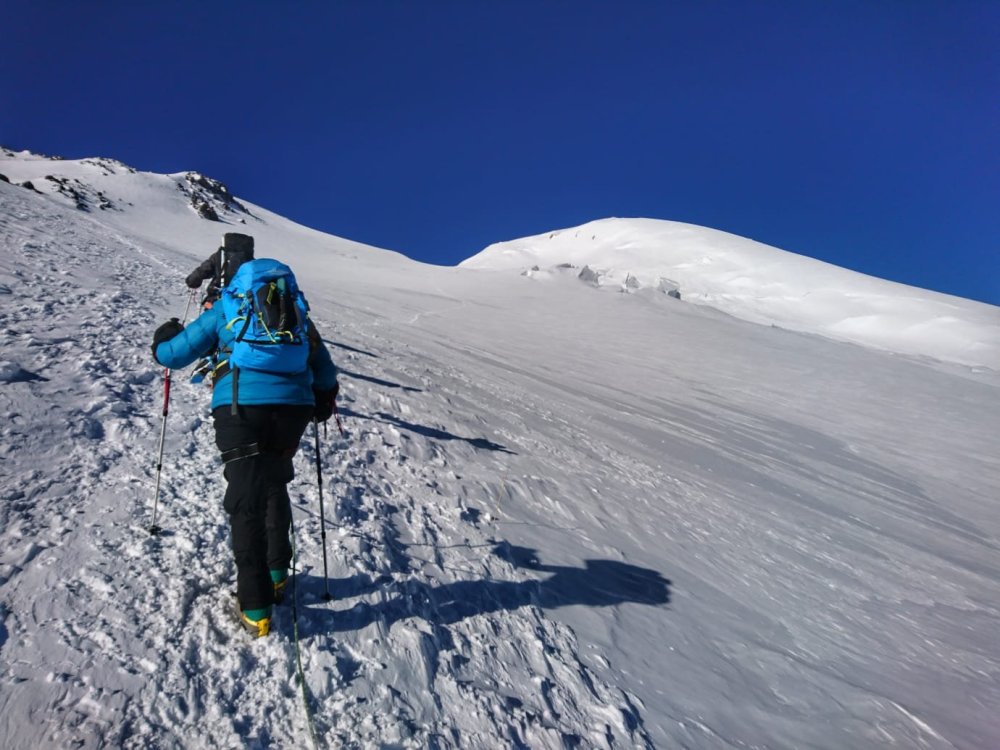 Nepal’s EBC Trek was nothing in comparison and I thought a few of them were hardish hikes due to the change in altitude..that now makes me laugh!!!

This was tough and to date this is definitely by far the toughest physical challenge I have ever done in my life. At this stage, right here, right now would I do it again – NO simple as…this was a crazy, stupid, mental idea. 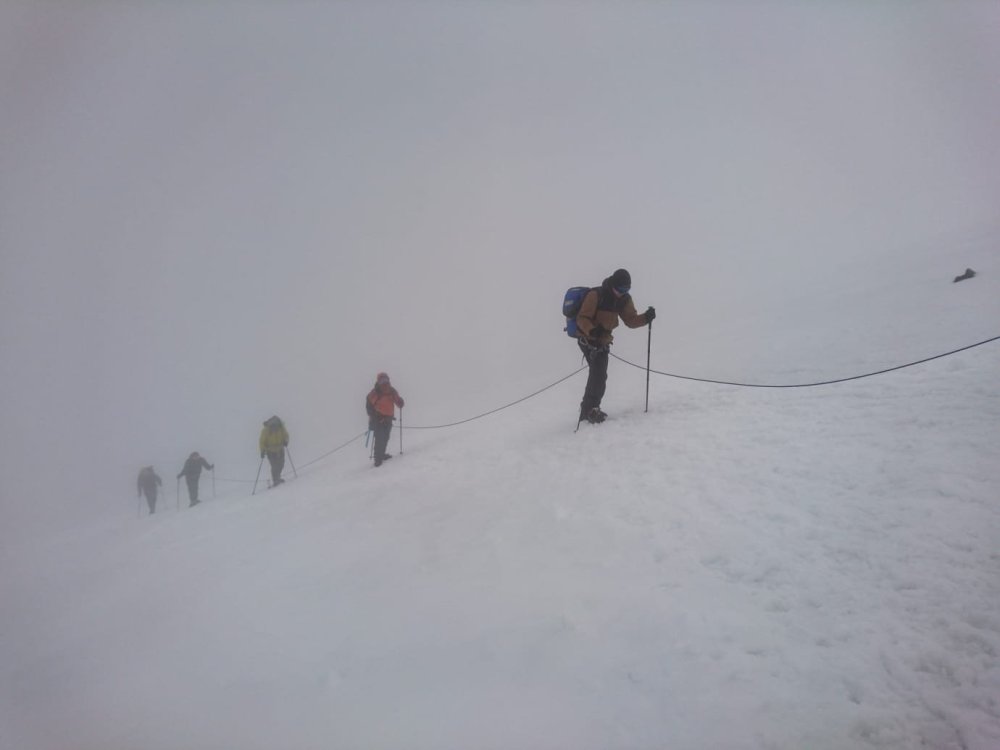 I was already feeling pretty weak with the dodgy stomach and I had done all this on 2 fried eggs and one small slice of bread…no wonder I was weak, my energy bank was gone in probably the first hour of walking. 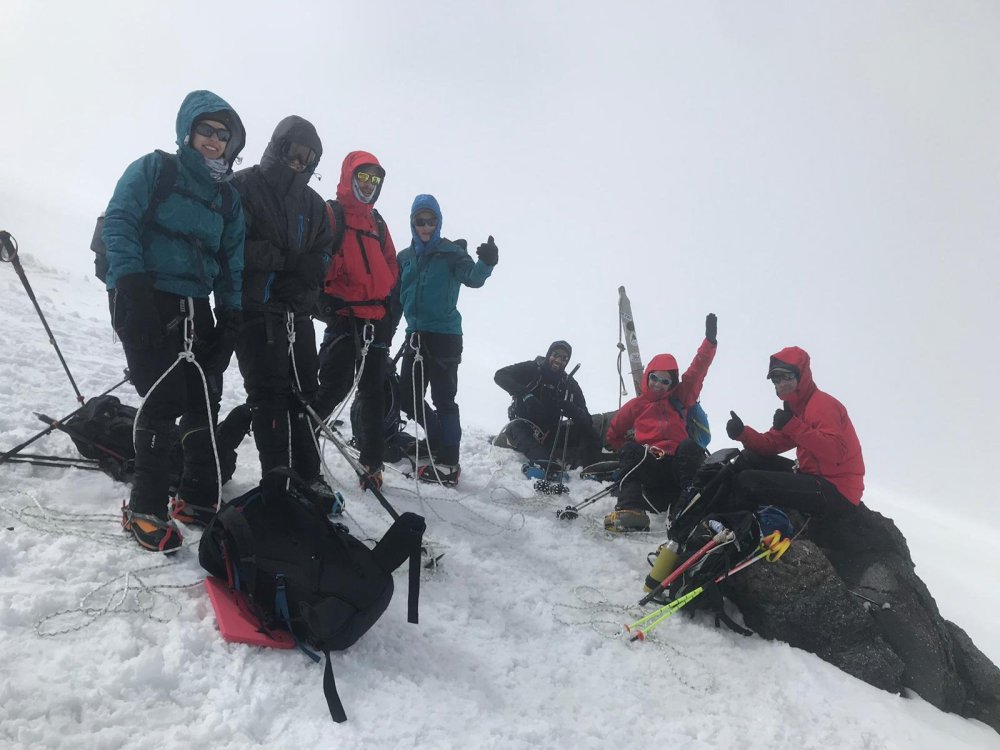 We were also all roped together which was pretty difficult as people were walking at different speeds and you could feel the tension not just on the rope but with some of the group as hunger and exhaustion kicked in.

One group member is having difficulty with her calves being really tight when she climbs so it makes things sore and difficult for her, I feel for her. 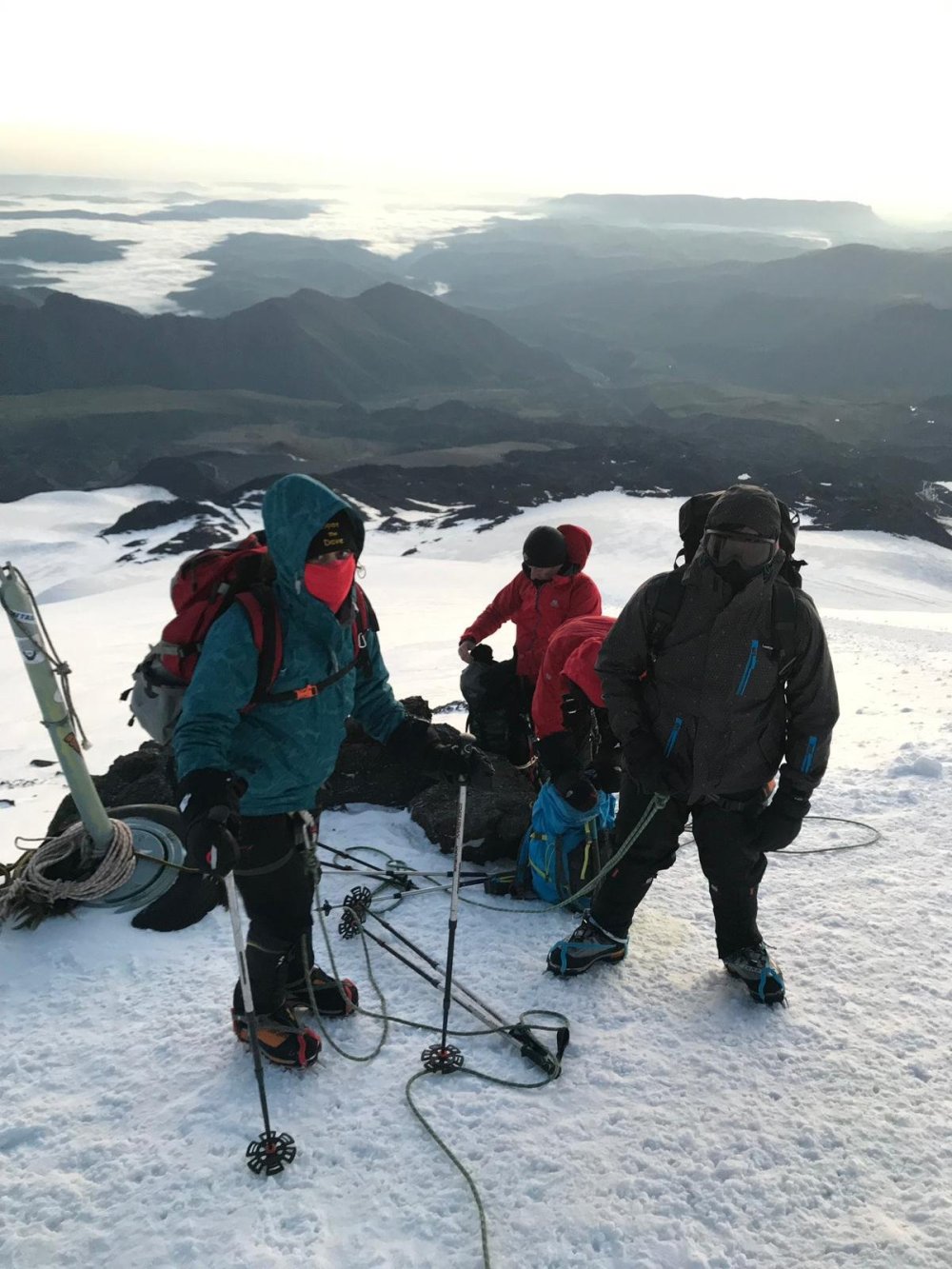 In this situation I feel it’s always better to acknowledge accomplishment rather than focus on the negatives. Just even slowing down for a bit for her because she needs to take it easy. Does it really matter how fast you get there…as long as you get there.

And to give her/us credit we had passed several groups so we were actually going at a reasonable pace, it was an acclimatization day, and it was bloody hard…I can’t tell you how hard it was but I was totally giving myself a talking to most of the way up about why I was putting myself through this! 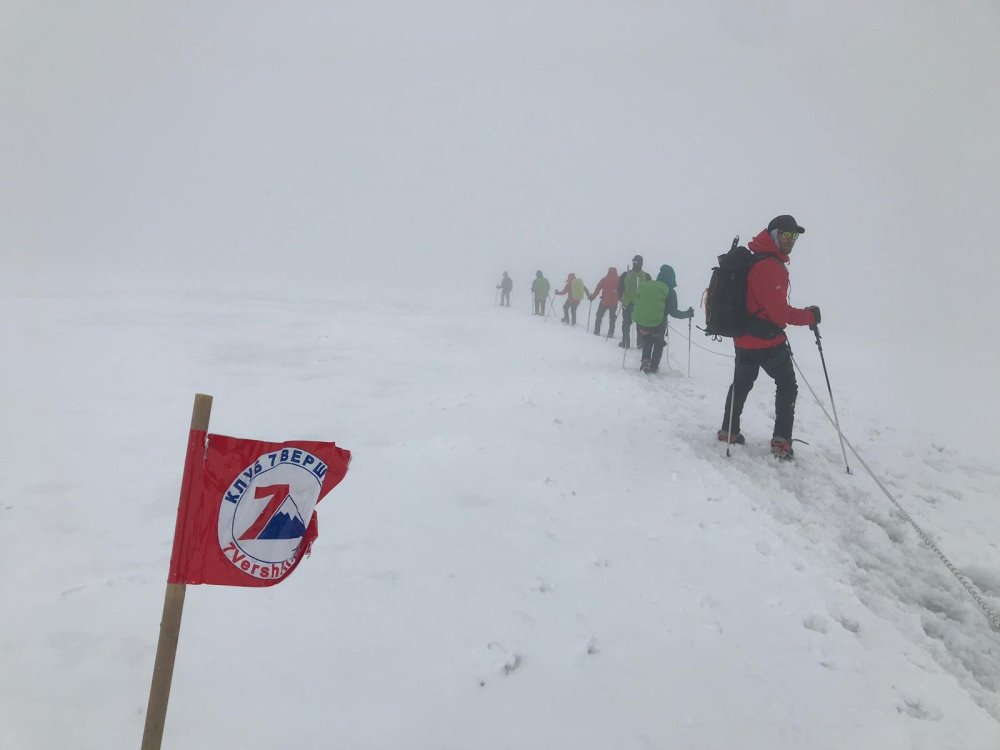 The sun had been out at the beginning of the hike but by the time we got to Lenz Rock it was snowing and it was freezing. 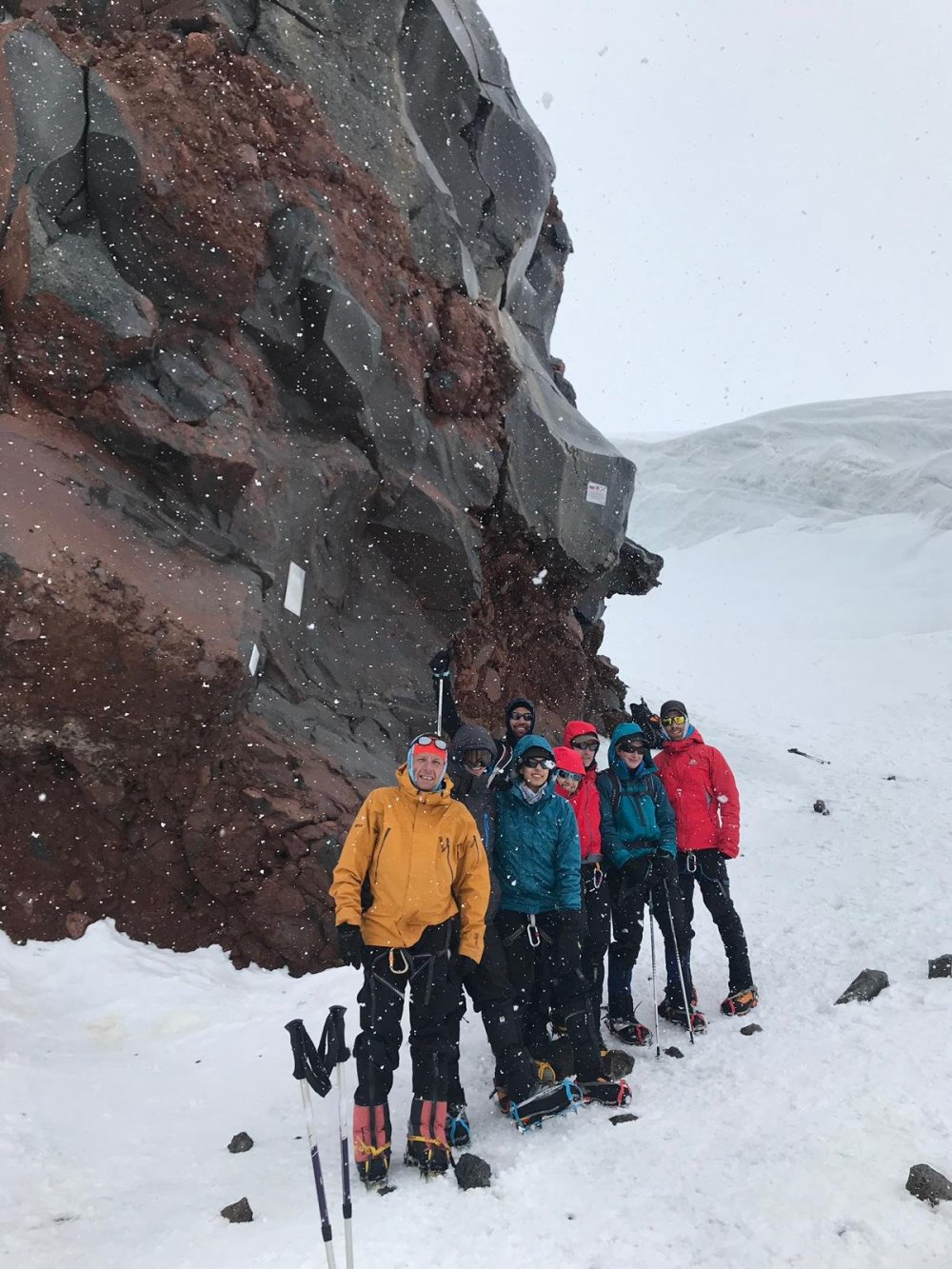 Anna had decided to trek up with us today and she gave us some demonstrations of how to do an ice axe arrest. 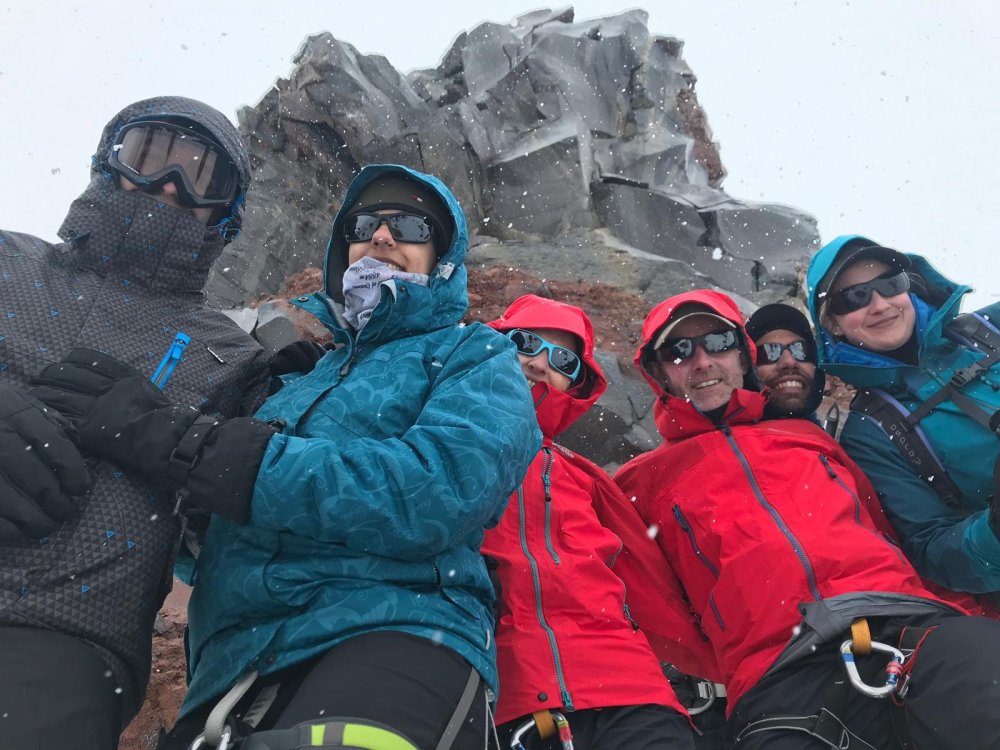 Once we got back to camp everyone was tired. My feet were absolutely broken with using the heavy snow boots and crampons as were everybody else’s. 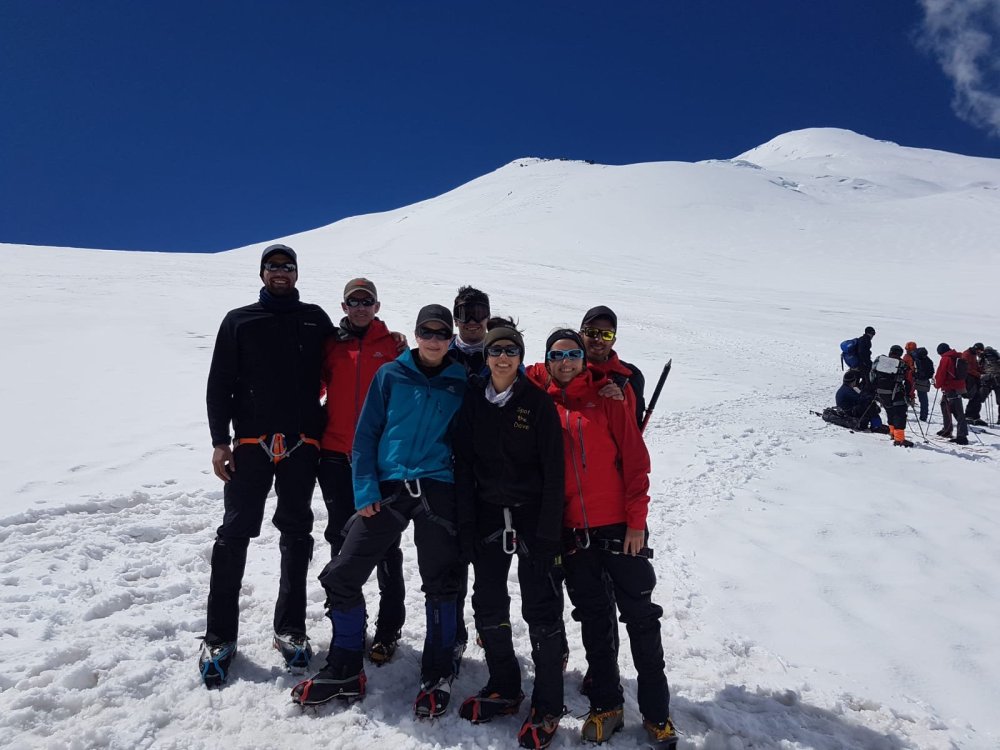 I sat on my bed dazed and just wanted to collapse but firstly we had to sort out our kit…then I lay in bed for like 15 minutes then Anna served us up some chicken noodle soup with bread for lunch at 5.30pm, that girl never stopped…with dinner being at 9pm which consisted of pasta, beef and peas. I managed the soup but the beef and pasta I struggled with, it tasted lovely but my stomach was still sick.

So up here we have to eat in stages as space is so cramped, so there’s always say 3 of us and Max, then the other four go, or the other way around. We always change who goes when and with whom also.

After dinner we relaxed by lounging about and playing Monopoly Deal – I blame the altitude!

Tonight as we went outside to our luxury en-suite in the distance we were able to watch a full electrical storm…it was pretty spectacular with the sky flashing with lights.

Once again that same sky was there in her full glory, massive stars, The Milky Way. I can’t even capture this on camera as I don’t have the lens but if you could see this it’s breathtakingly beautiful…so special…I will remember this forever. 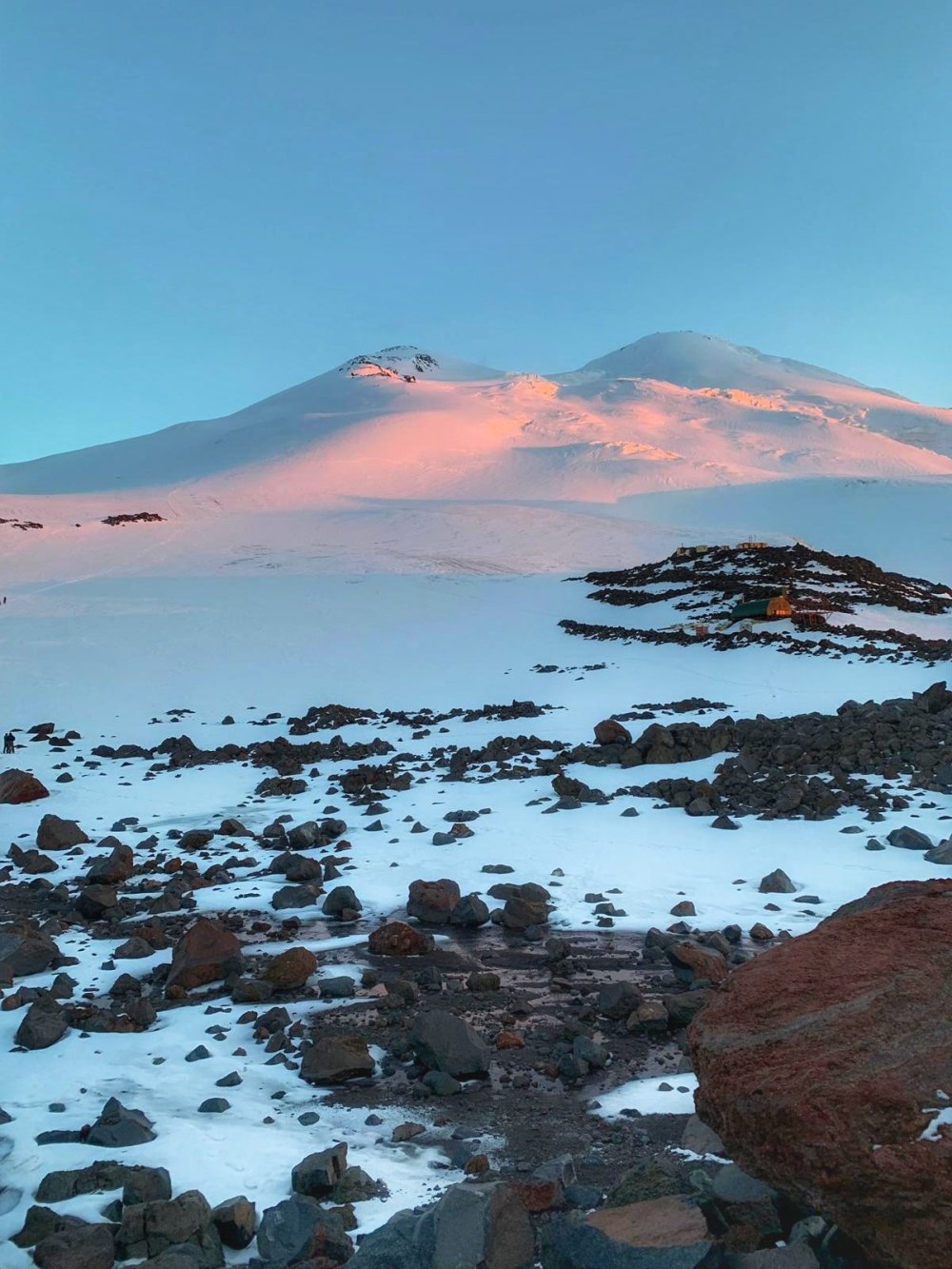