Welcome to Vietnam – or as they say “XIN CHAO”…and what a fine morning to be arriving into the city of Hanoi, jet lagged and weary in our new surroundings, yet overwhelmed by anticipation.

It is located in the northern part of the country, and is home to some 10 million people in the metropolitan region.

On taking a deep breath we are about to be sensory submerged! 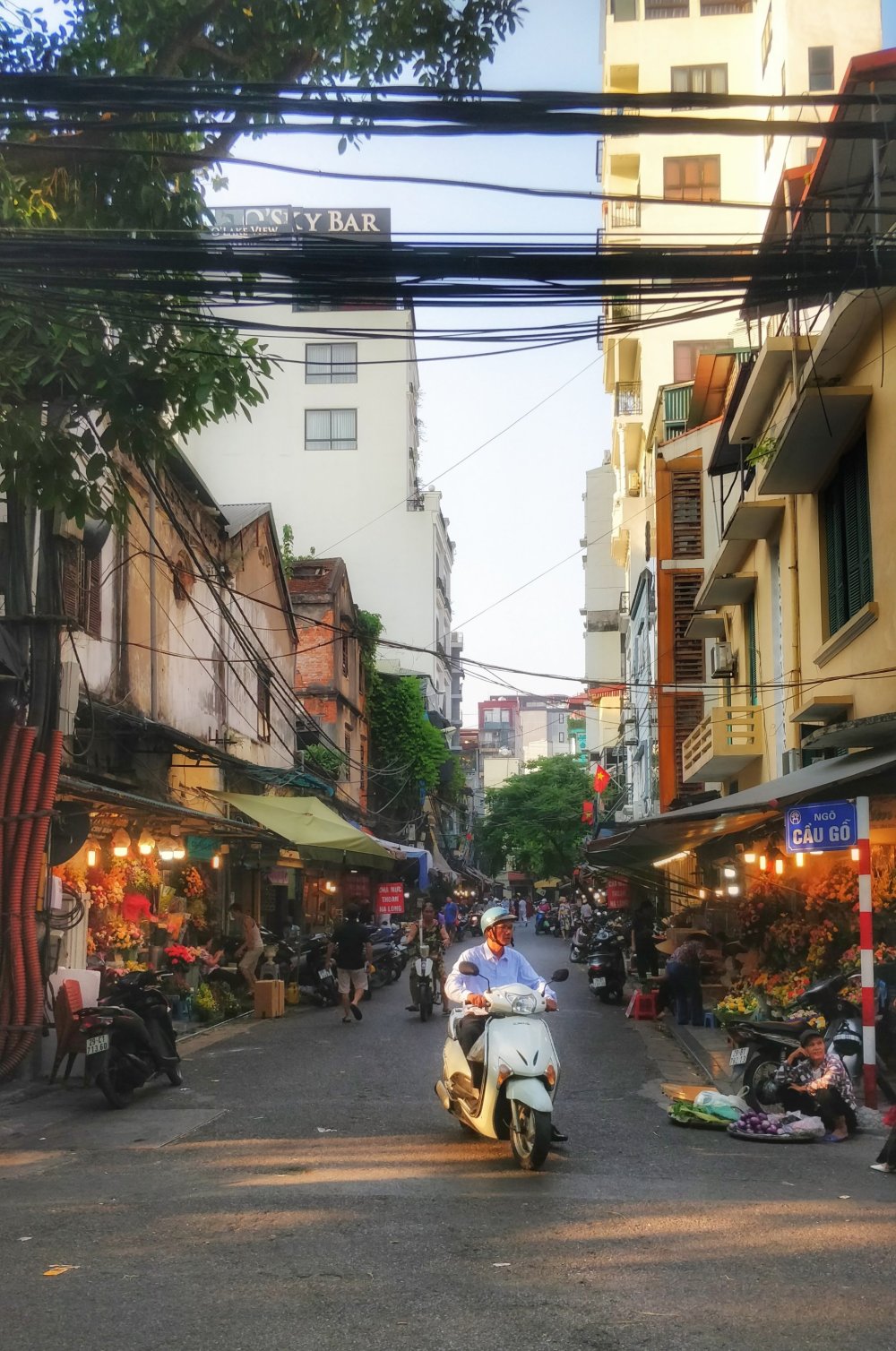 Eighty percent of vehicles in Hanoi are motorbikes, and this certainly overwhelms you at first. 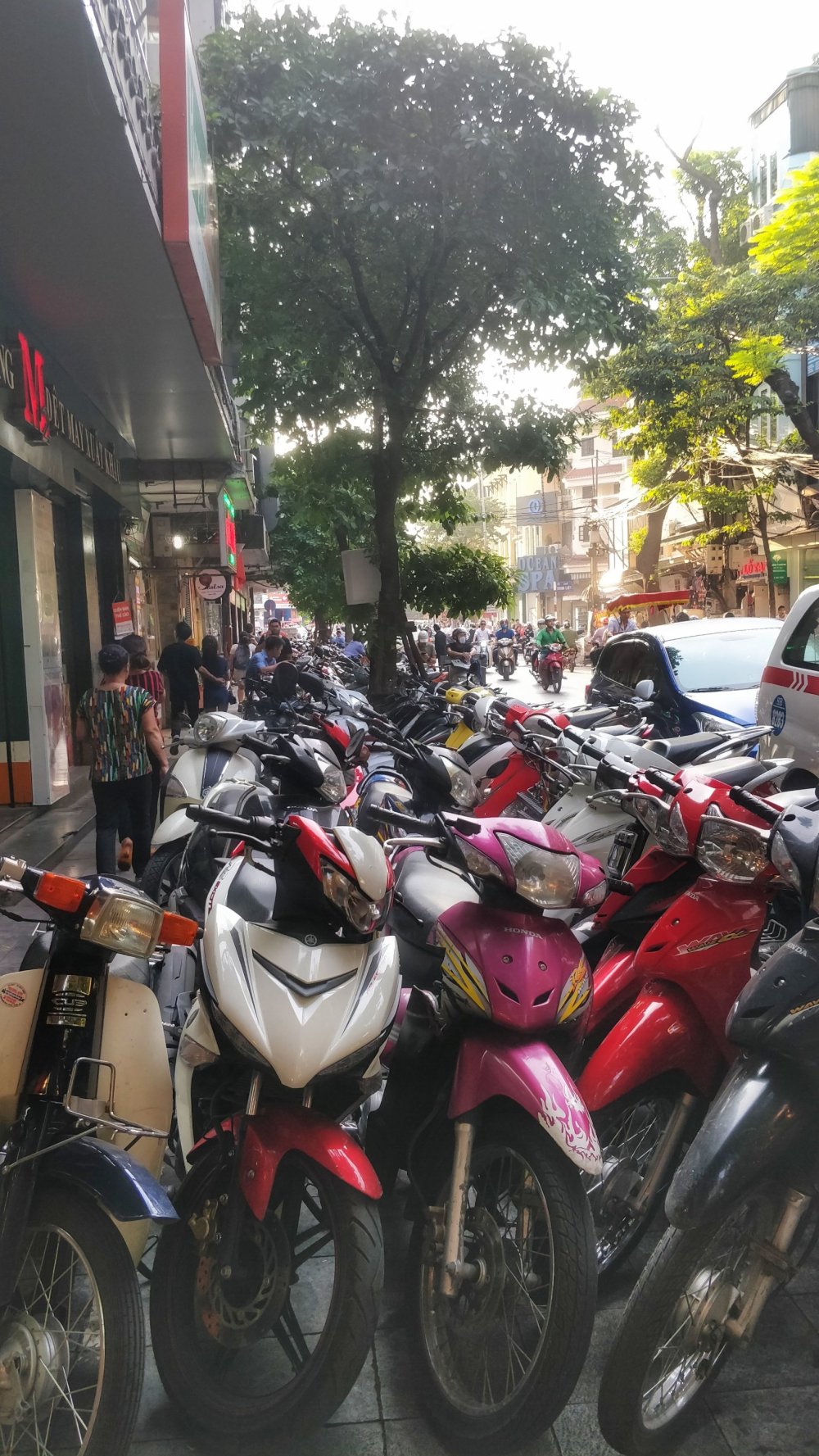 It felt like Nepal slightly all over again as crossing the street is like playing leap frog in real life! Walking around is a challenge.

Drivers honk their horns constantly, often for no good reason. A honk could mean, get out of the way, apologies for getting in your way, I’m turning left and/or right – or all of the above!

Confidence is key when crossing the road in Vietnam, we walk with purpose. Its a case of walking the same pace when crossing, this gives the drivers the time to spot you and calculate their next move which is hopefully to go around you (Read:we hope for this on a minute by minute basis).

If we slow down or speed up, then we might be in big trouble….

Hanoi does not have many tall buildings, in fact, most buildings are under five stories tall. 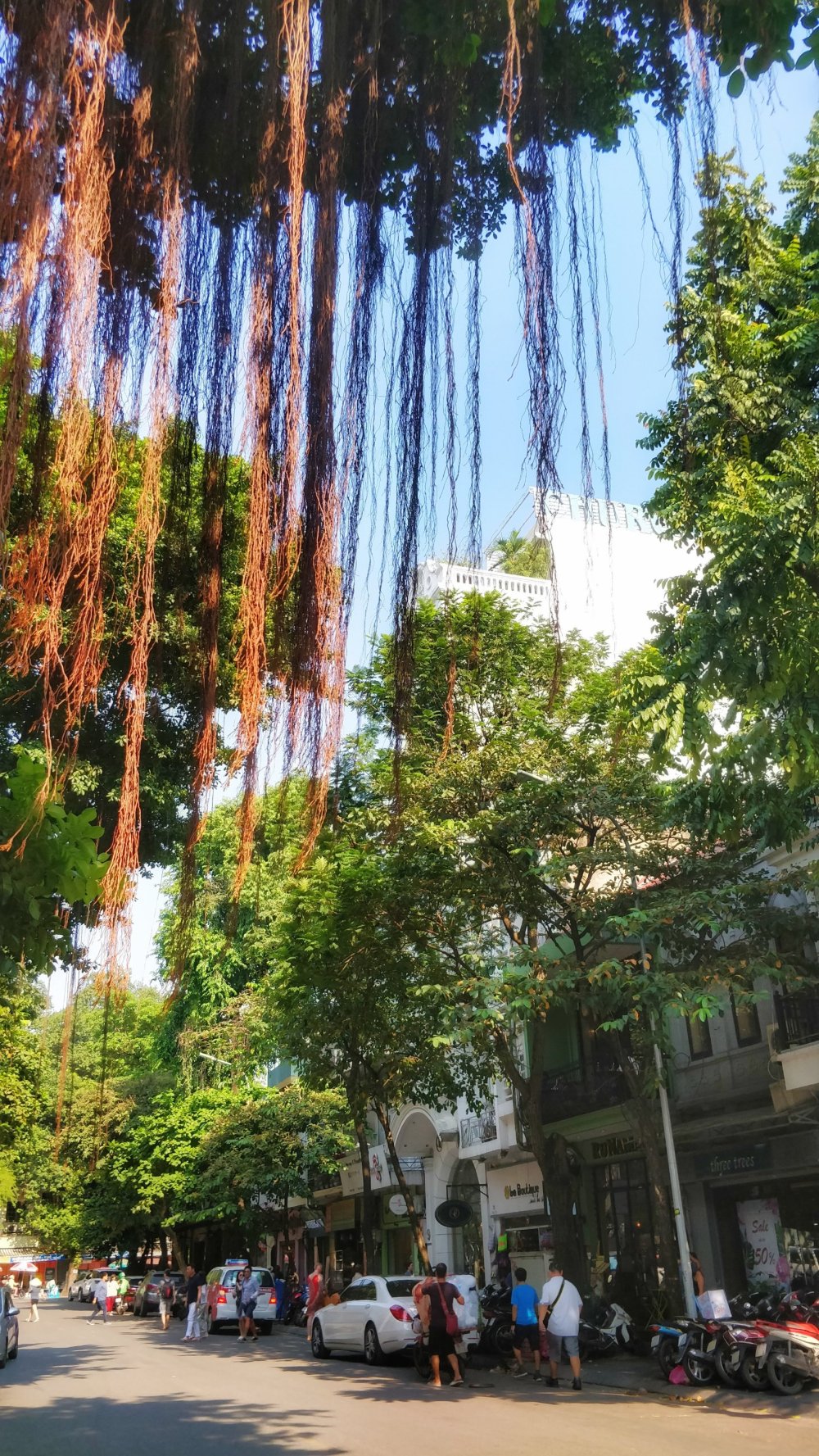 So far it appears many people in Hanoi do not speak English, with the exception of workers in ‘touristy places’.

Once we see past Hanoi’s chaotic exterior we start to really like this crazy Vietnamese metropolis. 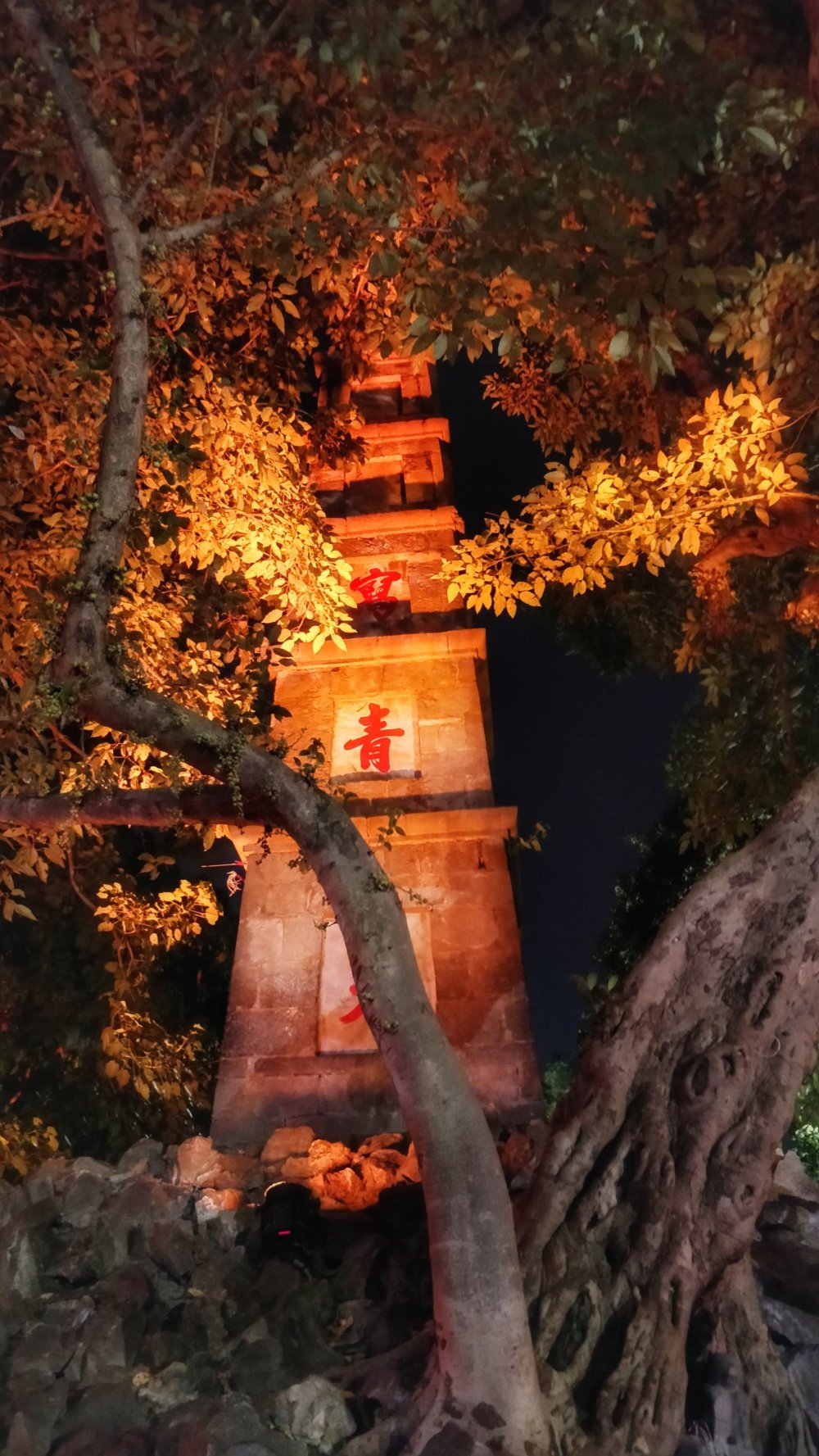 Its a joy to wander around. Chaotic, with crowded sidewalks and streets, exotic, colourful food for sale and motorbikes zipping everywhere, but that’s part of the experience.

Wandering around the city we see many locals chilling outside, on tiny chairs that could be used in nursery school….it appears the thing to do but very funny to look it.

The beautiful thing about Hanoi is that life happens on the street. People are getting haircuts, playing chess, children are playing games, women are catching up with friends – all taking place on the sidewalk. Its something to be seen.

The Old Quarter of Hanoi is where all the magic happens in the city and we deliberately get lost in the winding, messy, chaotic, narrow streets.

There is no place like this city, and getting lost is the best way to explore it.

Its noisy from all the honking horns, and the motorbike traffic is always heavy, but we continue to walk about it discovering tons of restaurant’s, bars, cafes, clubs and feeling the good vibes. 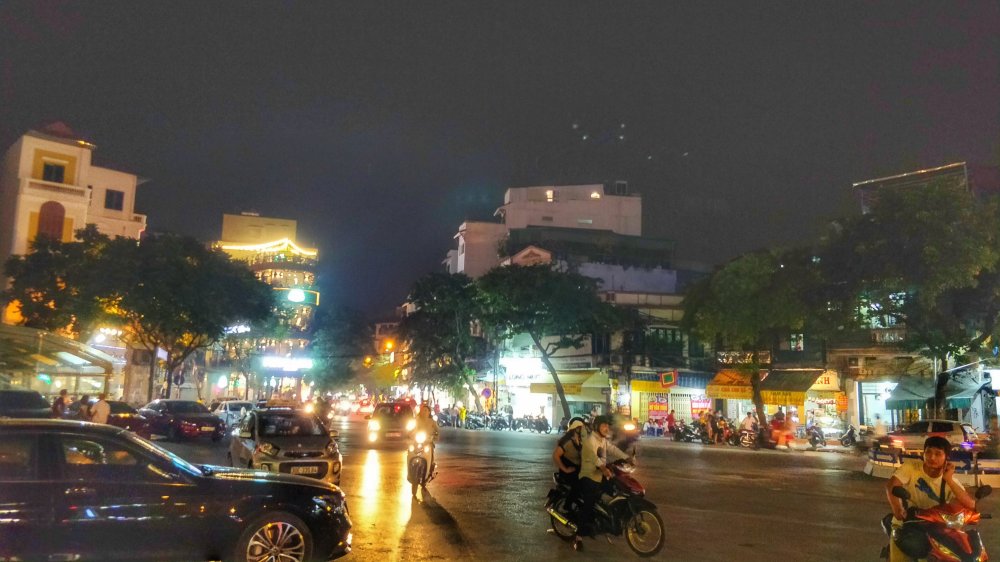 The Old Quarter is a collection of about 36 streets, which all specialise in selling something (like jewelry, pillows, shirts, baskets, shoes etc).

Each time we roamed we found something new, another hidden gem.

To escape the hustle and bustle of the city for a bit we headed for a walk around Hoan Kiem Lake. 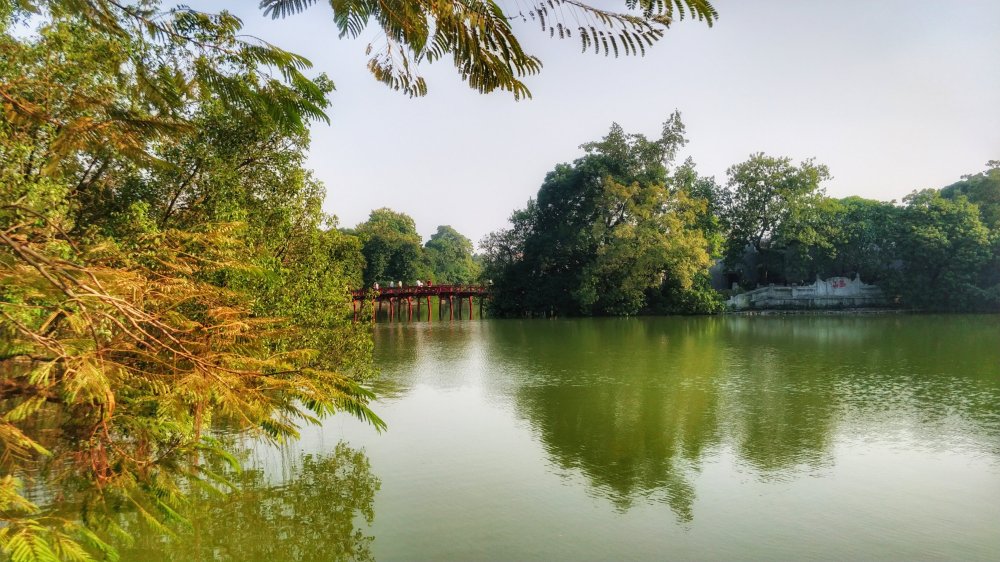 This is right in the centre of the Old Quarter. It’s a beautiful and charming lake with amazing views and just the perfect spot we were looking for. 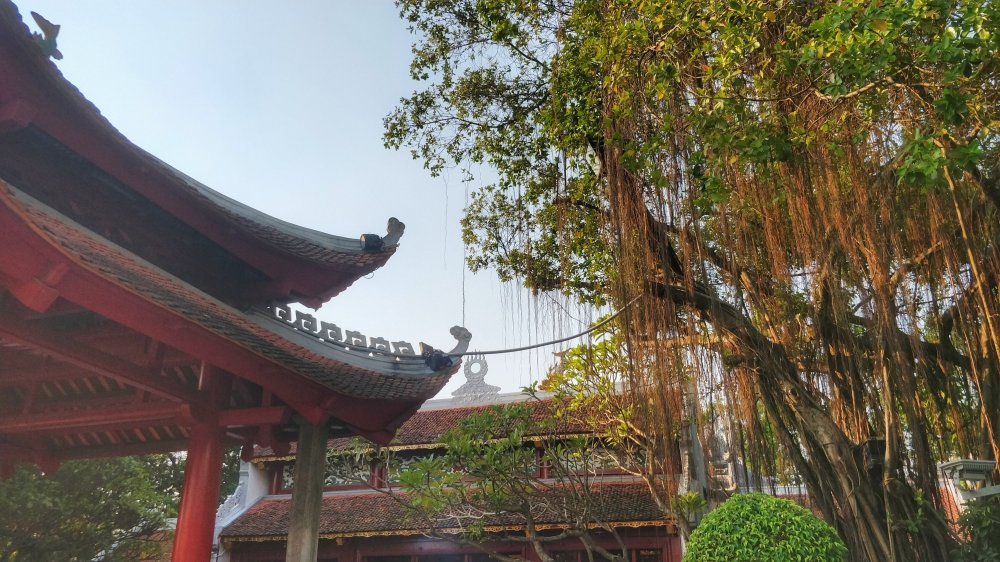 It was that nice we headed back down after dark where it was just as stunning all lit up. 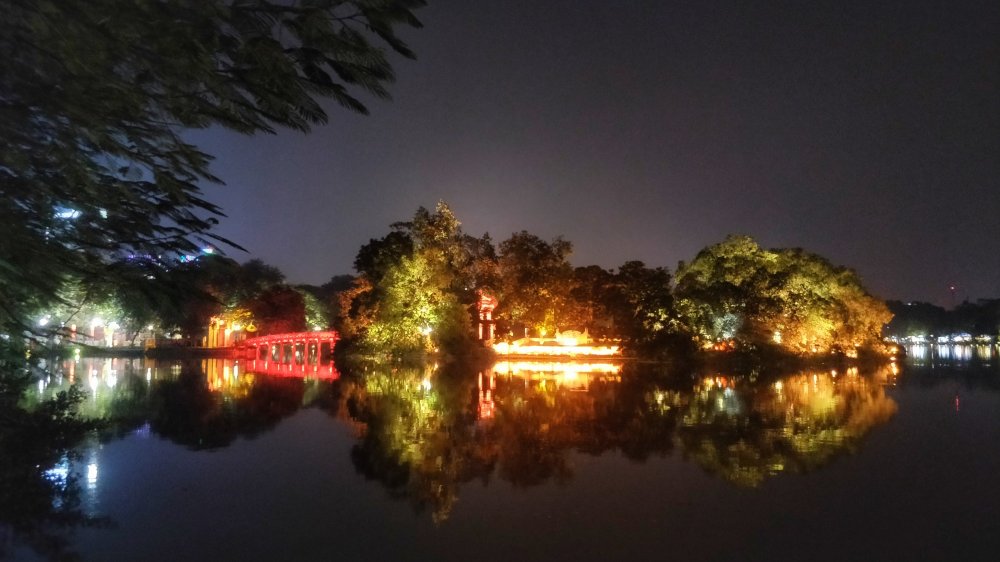 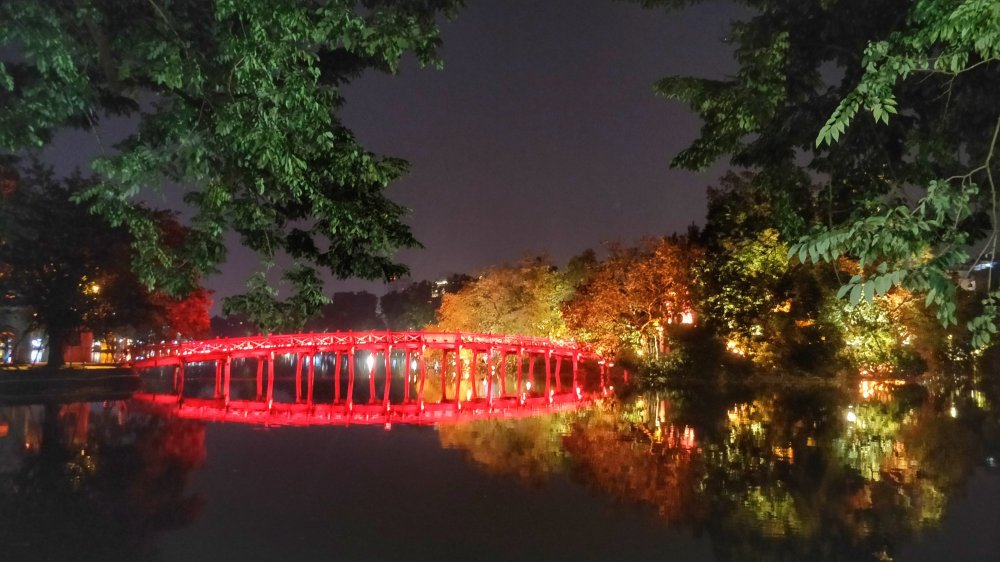 In the evening we also visited the weekend night market right in the middle of a main street in town.

It starts around 7pm and goes on until midnight! 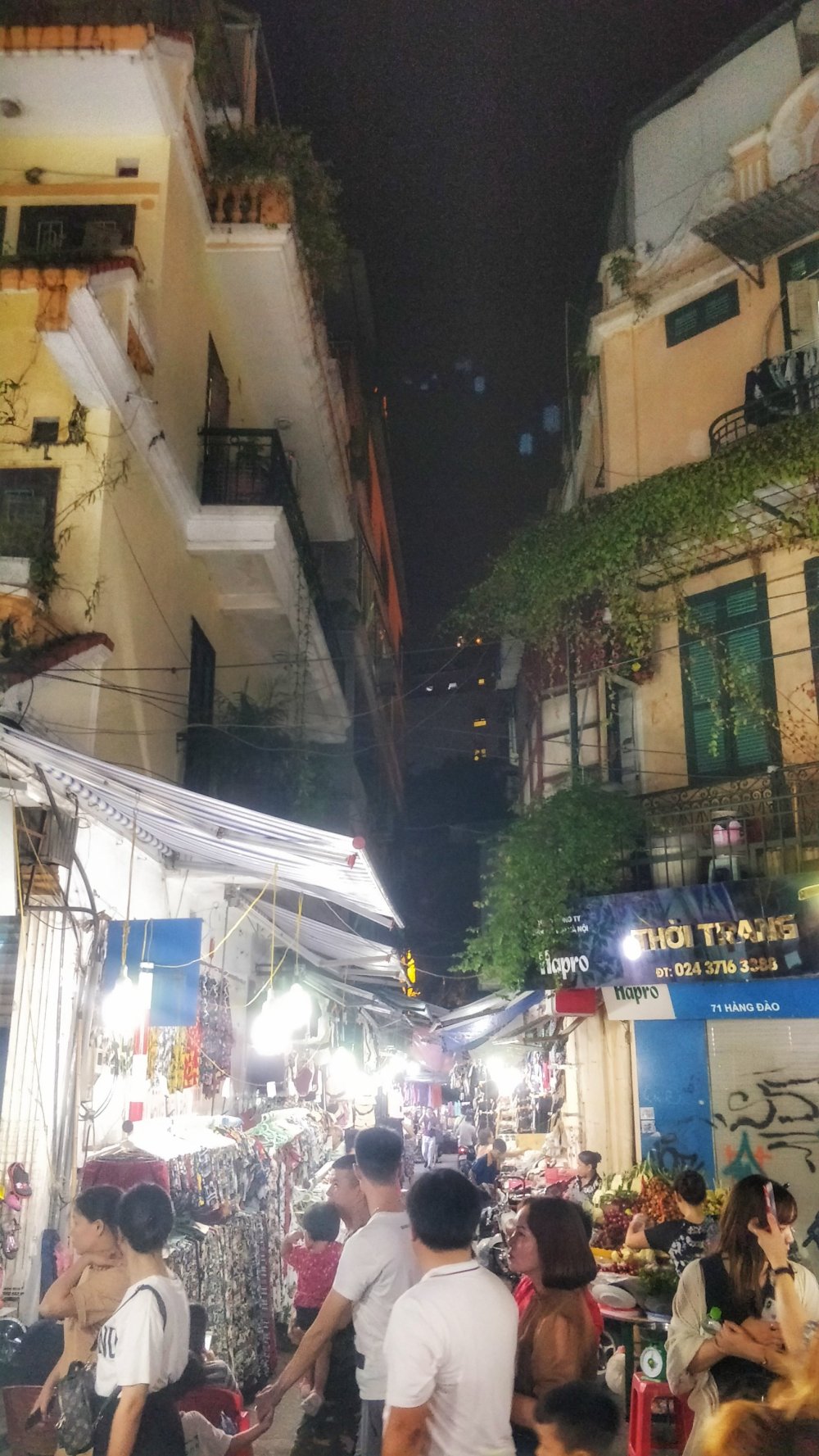 There are hundreds of stalls selling everything from shirts to bluetooth speakers, all fake of course!

We ate some street food which was amazing and dirt cheap. 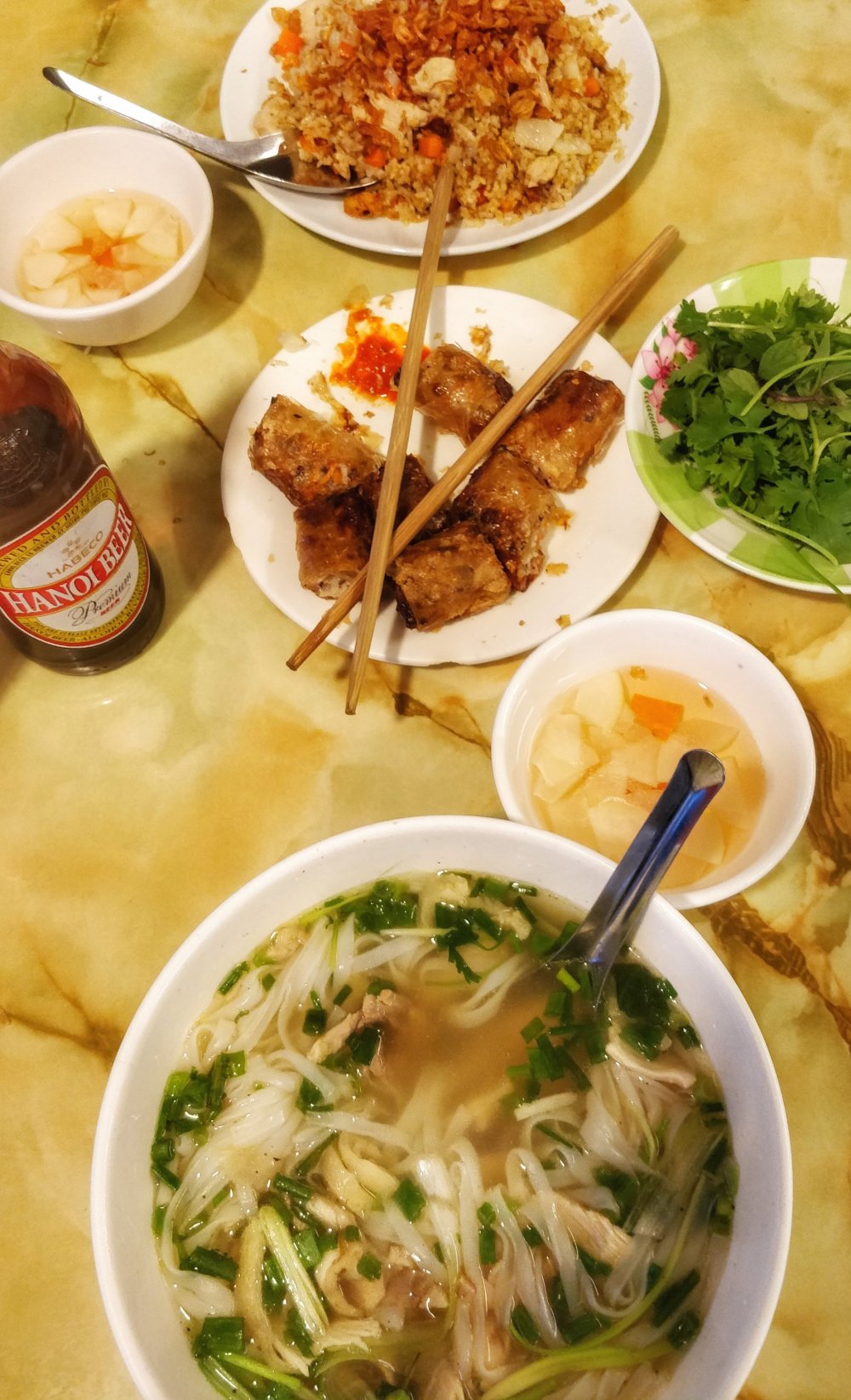 Then had a drink of beer on Ta Bien Street, also known as ‘Beer Street’.

This street is the place to be, everyone is sitting outside on the small chairs, drinking beer, eating BBQ chicken and chatting with friends.

The Vietnamese also love karaoke and it was hilarious to watch families sitting in the street singing karaoke!

Lastly we headed up to Train Street to try and catch sight of the train speeding its way through this tight jam packed street. 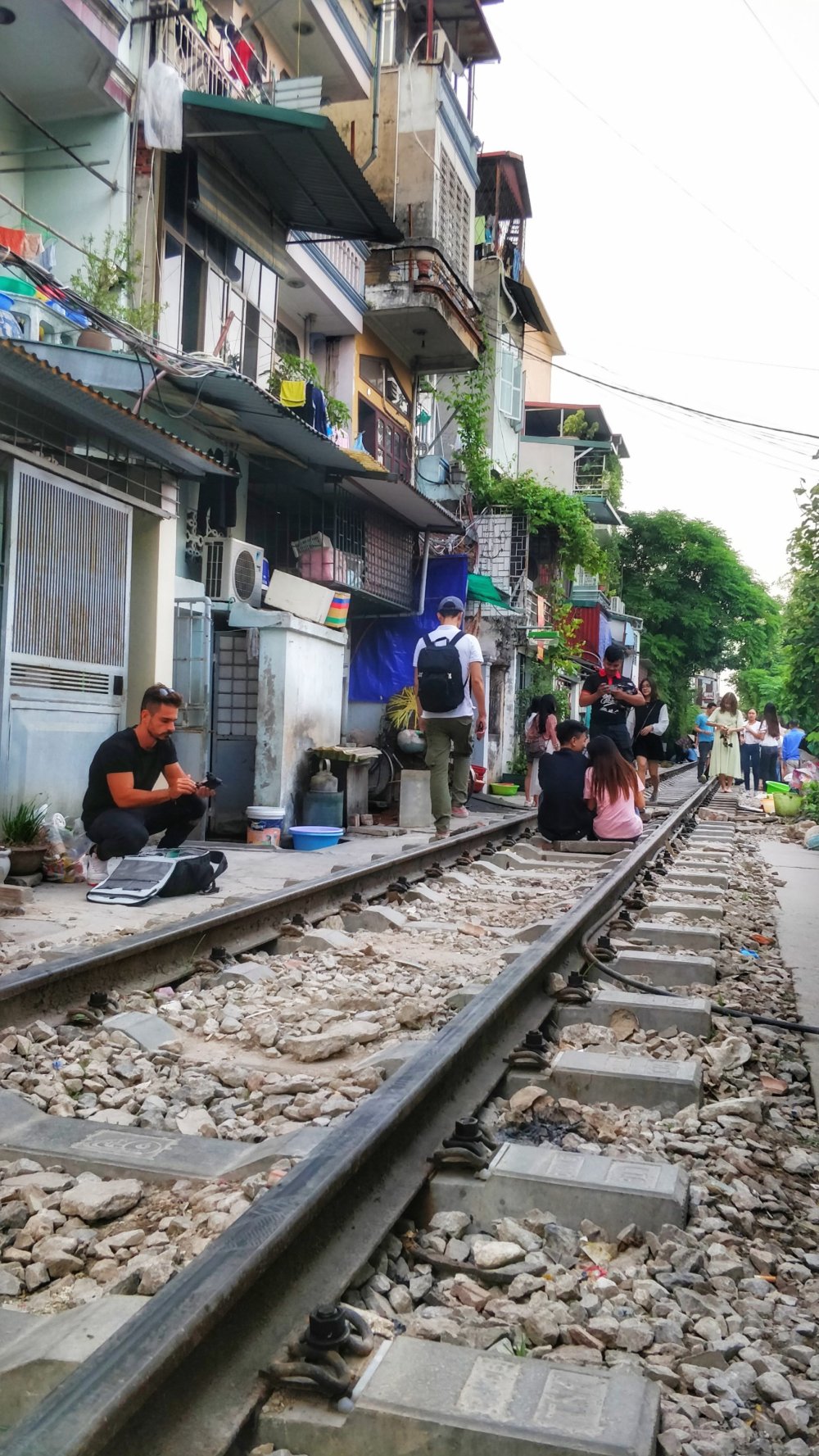 We had came up here earlier and couldn’t quite believe what we saw….a functioning railway line packed full of people walking on it, sitting on it, sitting beside it having a drink, it was crazy….so we bought a drink and joined in the madness. 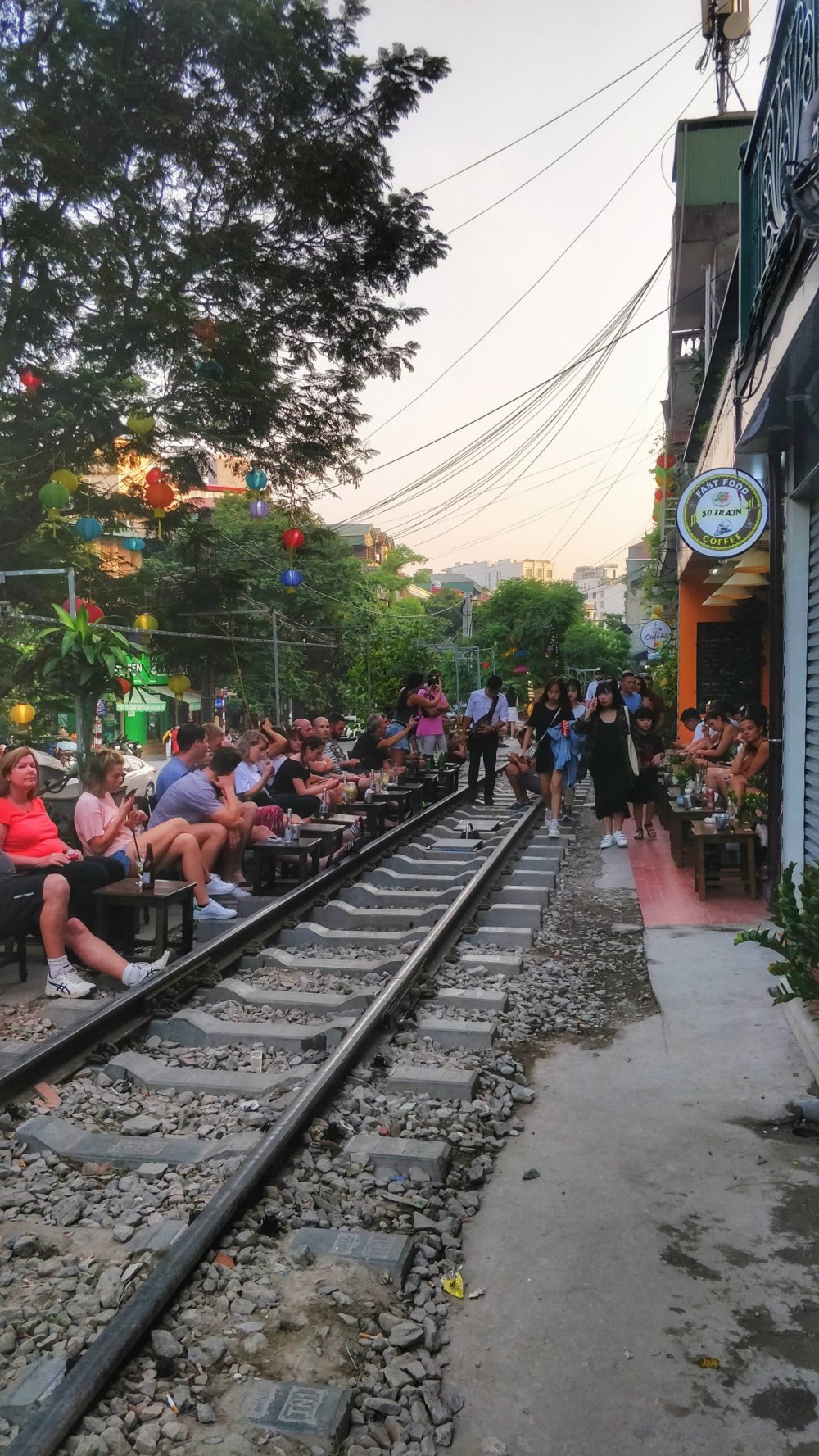 We kept thinking about it all day trying to imagine what size of a train could come through the area so we just had to go back.

We waited until dark, headed up, bought some drinks and sat right by the railway line!!!

We had been there a short while when people started to get excited. Whistles were being blown and men were running up and down clearing the track..it was something to witness.

Next thing we knew this huge, massive train sped up the track. The place was jam packed, the train was fast and the street was tight! 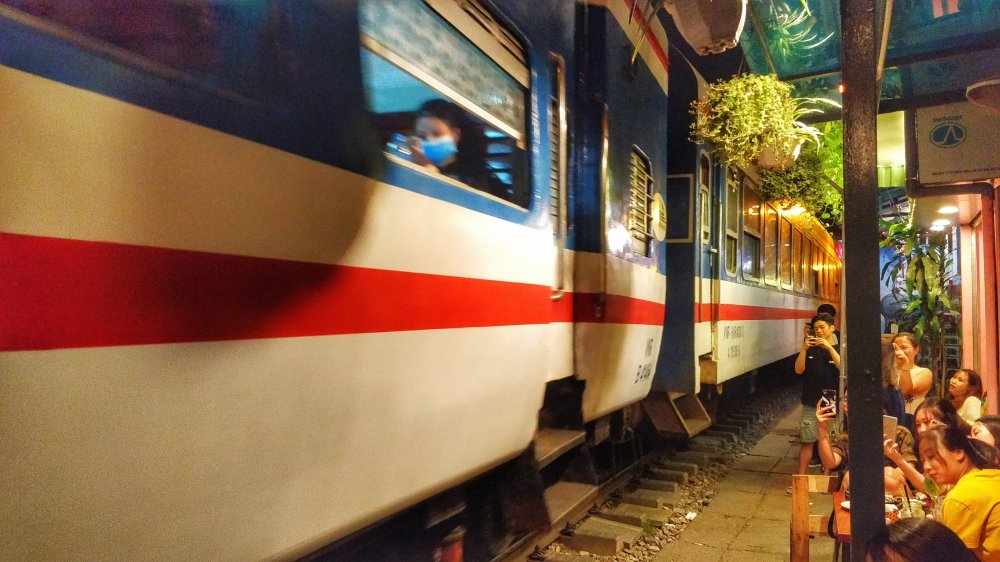 The train went right through the middle of this street where people still live, and others like us come for a drink on the railway line to catch this exact sight!

It was something else!

Then we could take no more, we had been up for approximately 34 hours…and we were tired.