We had left the Cerro Fitz Roy hike to our last day. We kept putting it off waiting to get a break in the weather. We had given ourselves extra days here, so we had 5 days in total, as we were aware of the tempremental weather but even 5 days didn’t seem to appear enough.

After looking at the forecast last night it had changed several times with the last one showing that 5pm would see partial clouds, but the morning would not start off too well.

We needed to be back in town for 4.30pm as we had to pick up our large gear bags and catch a 6pm bus as we were returning to El Calafete tonight!

We agreed that no matter what we wanted to do the hike. It was unlikely we would get to see Mount Fitz Roy but we would accept that, at least we had still hiked to it. I’m going to be honest I was gutted but in my mind accepted whats meant be is meant to be.

We had to leave our small cosy pink house by 4am if we were to be back in time. It was a 25 minute walk each way from our apartment to the start of the hike so we had to factor in that and of course factor in the weather even more so. The weather and terrain conditions playing the massive factor.

So this hike supposedly offers the best views of Fitz Roy and the surrounding glaciers, but they say it’s a hard long day hike.

Many choose to camp overnight along the way but as mentioned we chose to do it in the day by rising early and getting a head start. Well the weather actually chose for us to do it this way but I had planned to see sunrise on Fitz Roy at some point when we were here.

So Mount Fitz Roy has to be one of the most unique and impressive mountains I have seen and I’ve seen a few. It has an equally impressive blue lagoon at its foot.

The total distance is 20.4km from start/end of trek which could take 8-10 hours.

To be able to open your front door, walk out into such dramatic, majestic scenery is a real privilege. 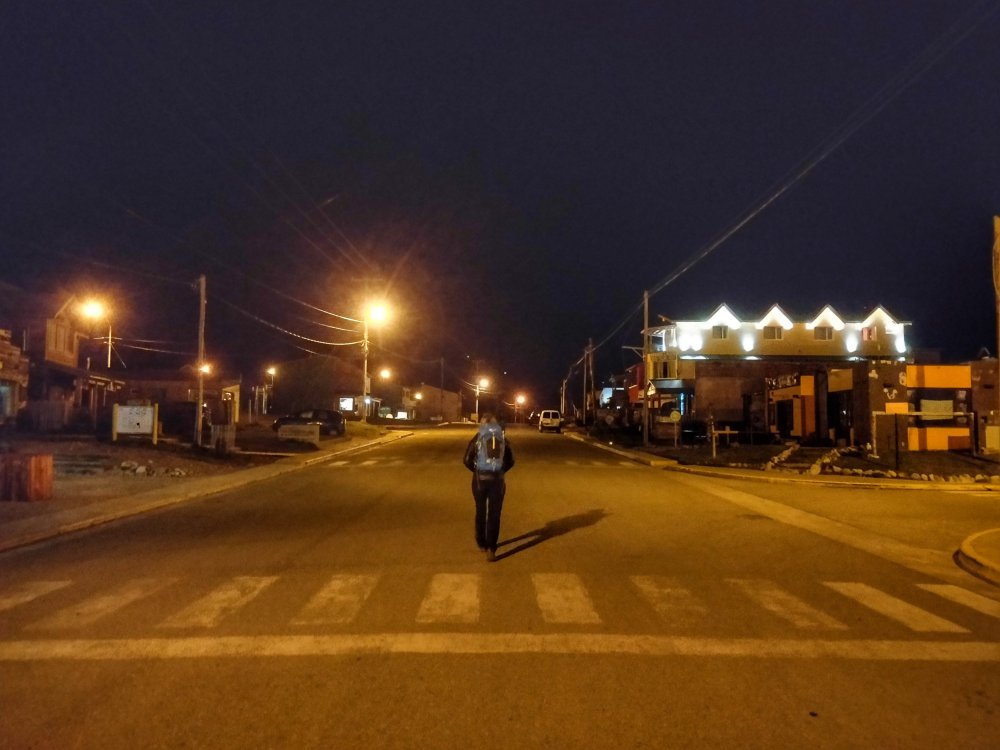 We had expected to see other hikers around but we didn’t. It was a calm morning, actually warmish for that time of the morning. But it was pitch black. As soon as we left town head torches were on. 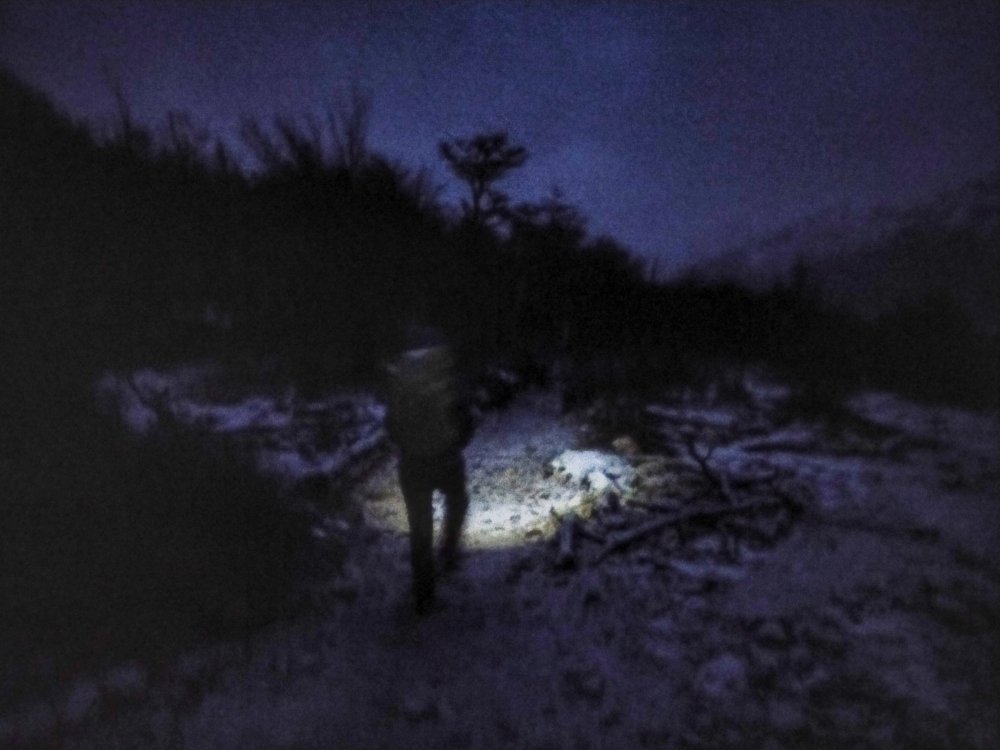 This trek began with a moderate long uphill, it felt like it went on for ages but maybe that was just my legs telling me they should still be in bed! The path then took a flatish route through forests but we couldn’t see any more than that it was so dark.

We began to think about Puma’s at this point also, well Andy did so he unclipped his walking pole for ‘protection’…it felt like Nepal all over again! However I was at the back…who/what was going to be my protection?!

The difficulty of the trek changes of course according to the weather, as high winds and loose rocks can be treacherous and guess what…yip it started to snow five minutes into the hike, just what we needed.

The trail takes you to an amazing lagoon – Laguna Capri. We were going to try reach here for sunrise but we hit it early it was still dark, but getting slightly lighter, we wouldn’t see the lagoon.

The sky was heavy with cloud and we also realised we were not going to see sunrise on Fitz Roy so we plodded on silently.

We ended up reaching the trail almost at the base of the last climb up to Fitz Roy by sunrise which we felt was good going, the sun rose on the mountains and there were blue skies, just no-where near Fitz Roy. 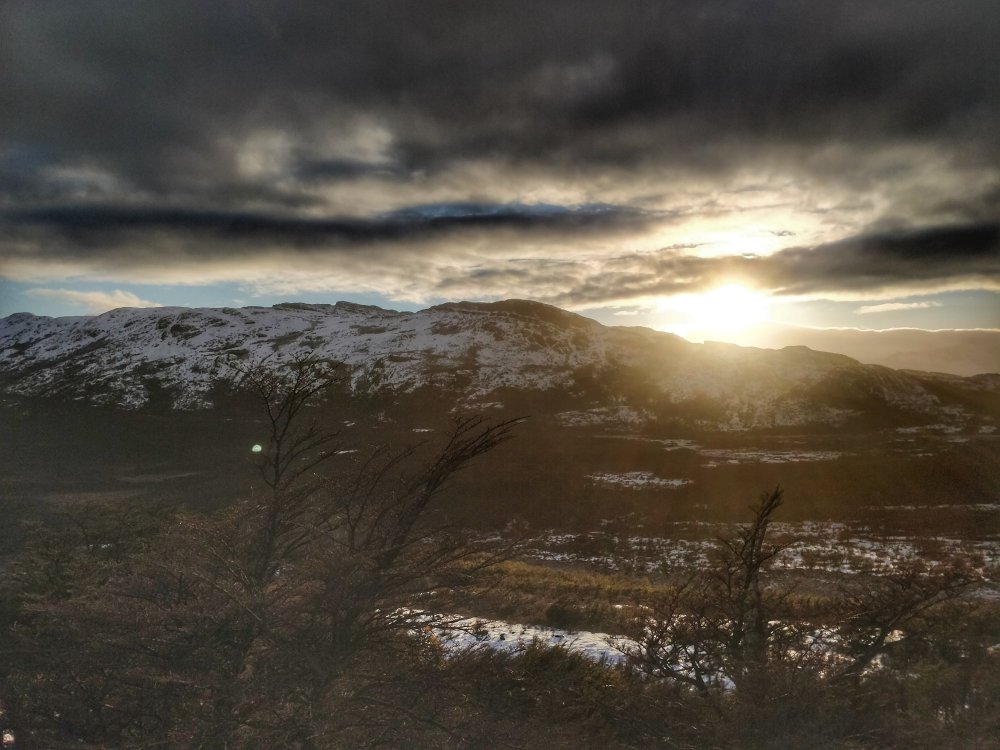 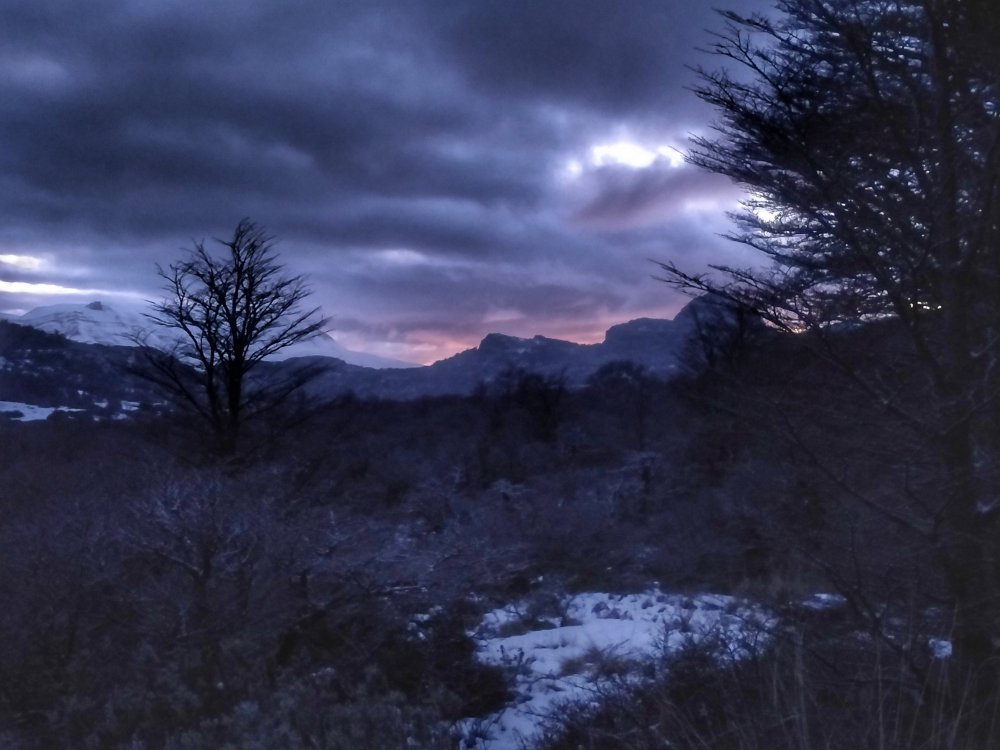 It was peaceful though, pretty special and not a soul in sight, just us. 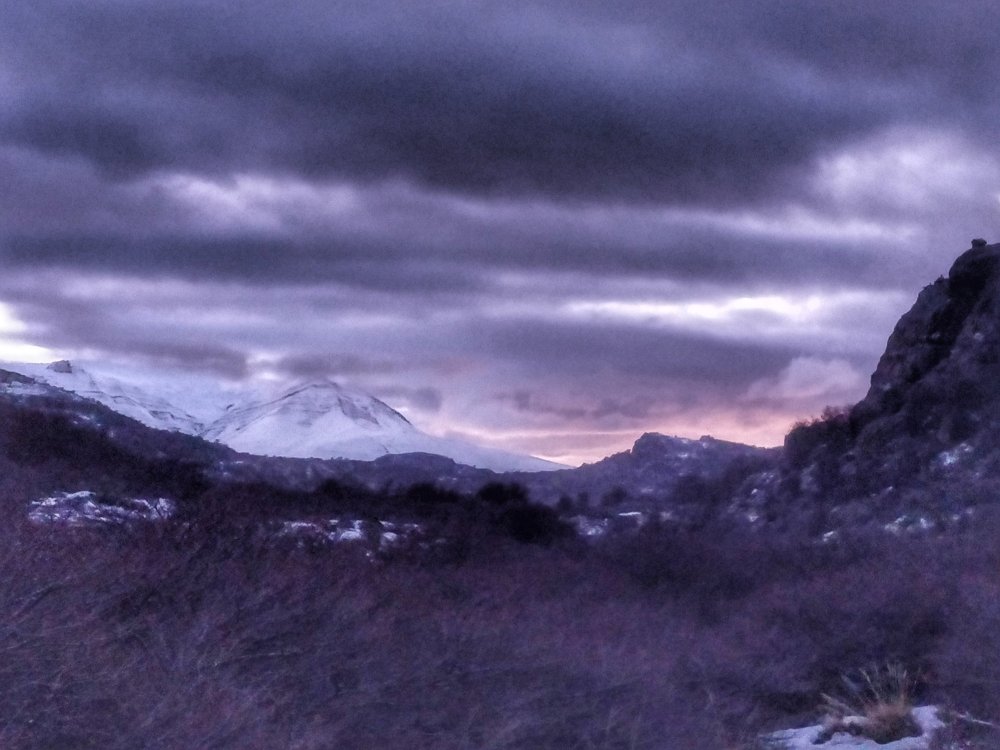 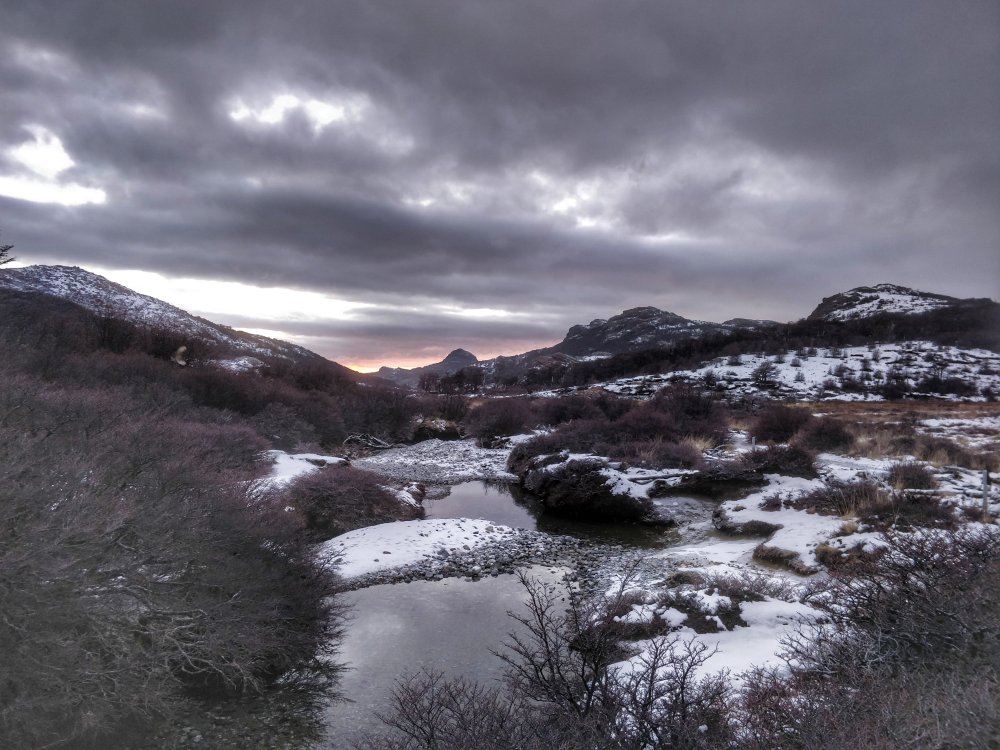 Then we hit what is described as the last hour or so of the trail which ends with a steep climb.

As soon as we started to climb it became massively difficult. There was a build up of snow which was solid, the water that was running of the mountain had also frozen over. So we were trying to walk mostly over ice up an already steepish climb.

We plodded on and on and it even got to the point where we thought are we out of our minds should we stop and turn back as it was so treacherous.

The climb up in terms of steepness wasn’t as difficult as had been described in things I had read or people we had met on our trip, but the ice was unbelievable…it was turning into ice climbing!

We slowly kept going and we didn’t even have the end result of knowing we were going to get the closest view of Fitz Roy’s granite wall and surrounding peaks because we knew we weren’t, the sky said so!

I always usually focus on ‘the best views come after the hardest climb’ but not today unfortunately!

Eventually after what seemed like an eternity we reached Laguna De Los Tres, this sits at the base of the mountain named because of Fitz Roy’s iconic three peaks. 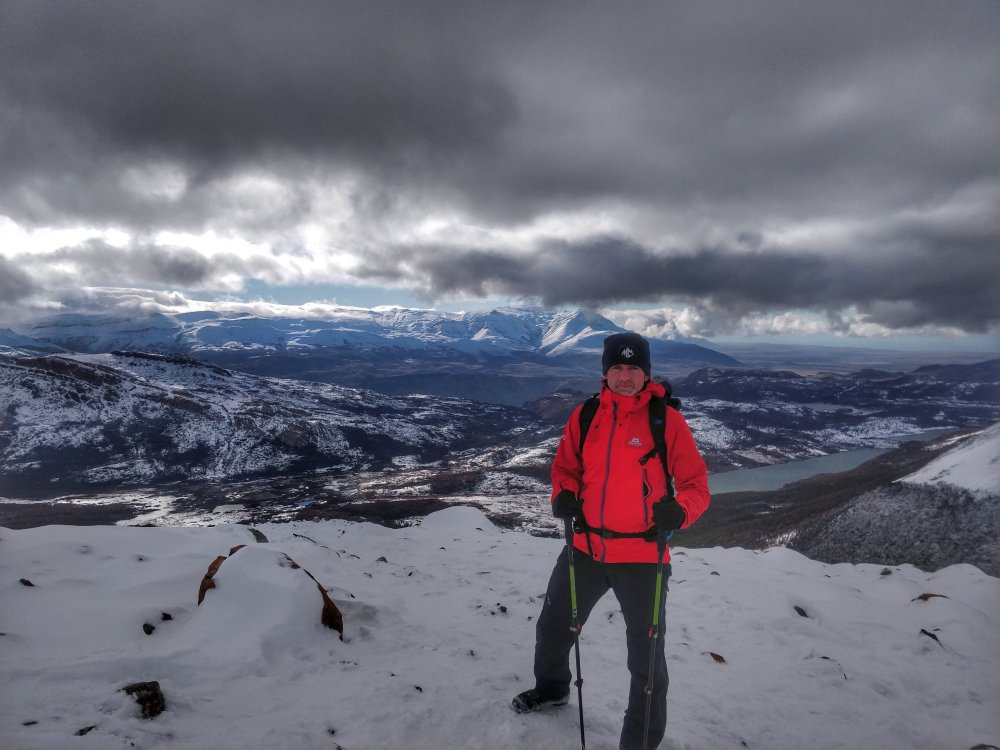 We were at the top. The views to where Fitz Roy was standing was thick in cloud it was slightly soul destroying…views everywhere else stunning. We could even see glaciers. 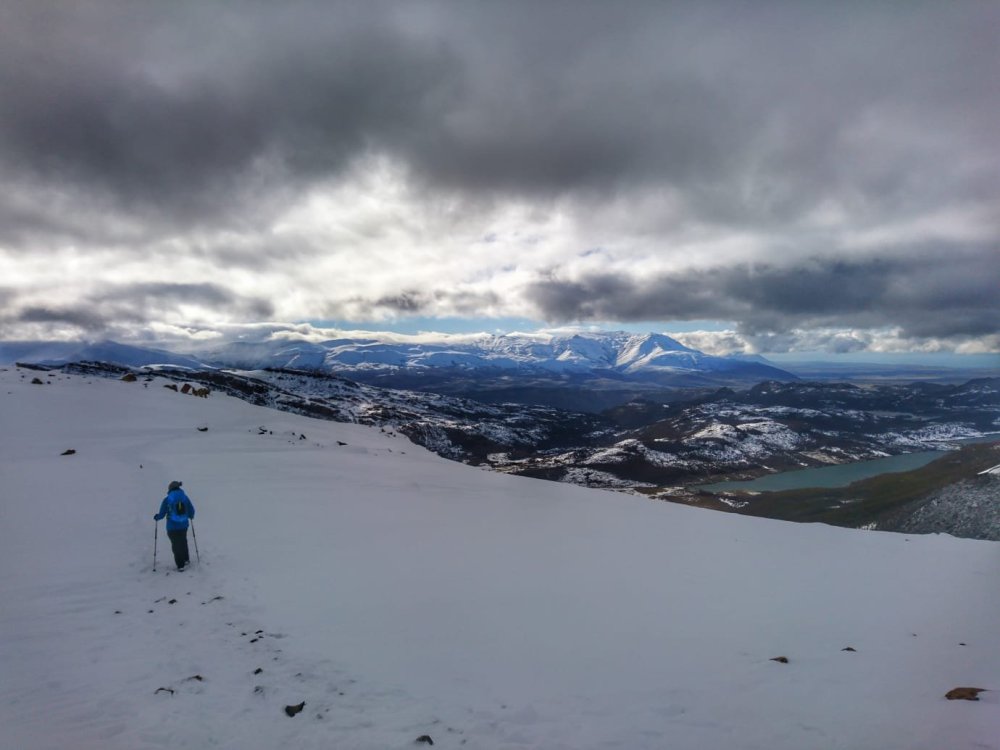 We doubled our layers, took our pictures and set back down.

It was a nightmare. Slow and steady all the way until we were down safely it took us almost double the time it should have.

The sky by this time was brightening up and we were seeing more and more blue skies, we couldn’t understand how Fitz Roy couldn’t be seen. 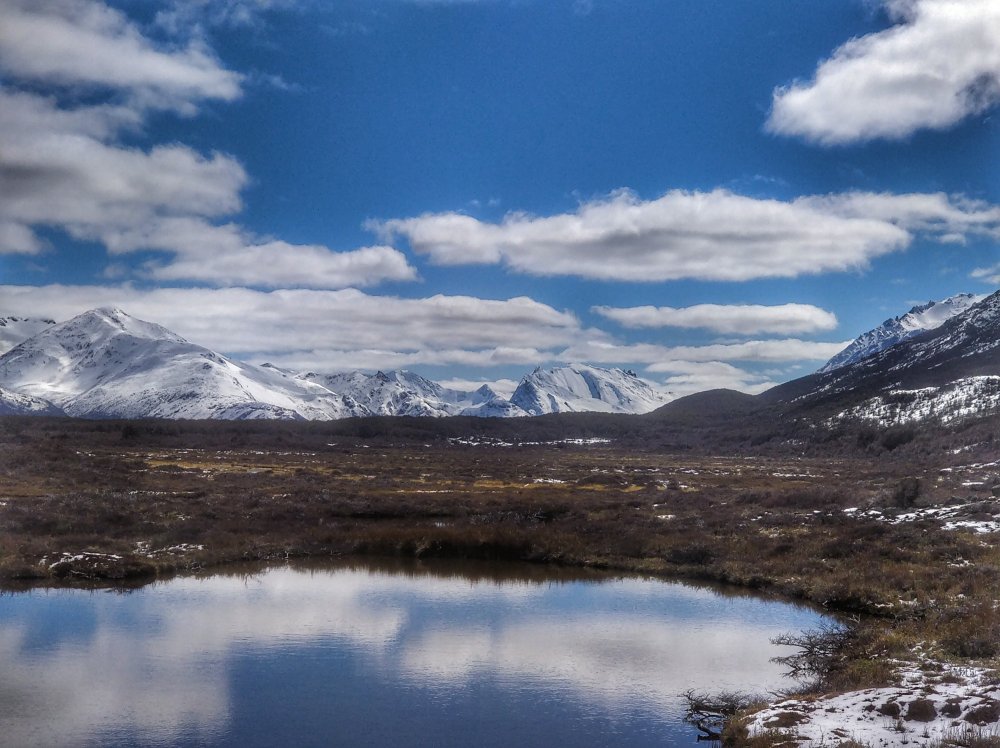 Until……she appeared! Well we actually thought it was her as she looked massive. I was so excited…then low and behold, this massive massive peak appeared beside her…This was Fitz Roy …she was utterly huge. Clouds were still around her, we couldn’t see all of her but she was there.

First views we got of Fitz Roy 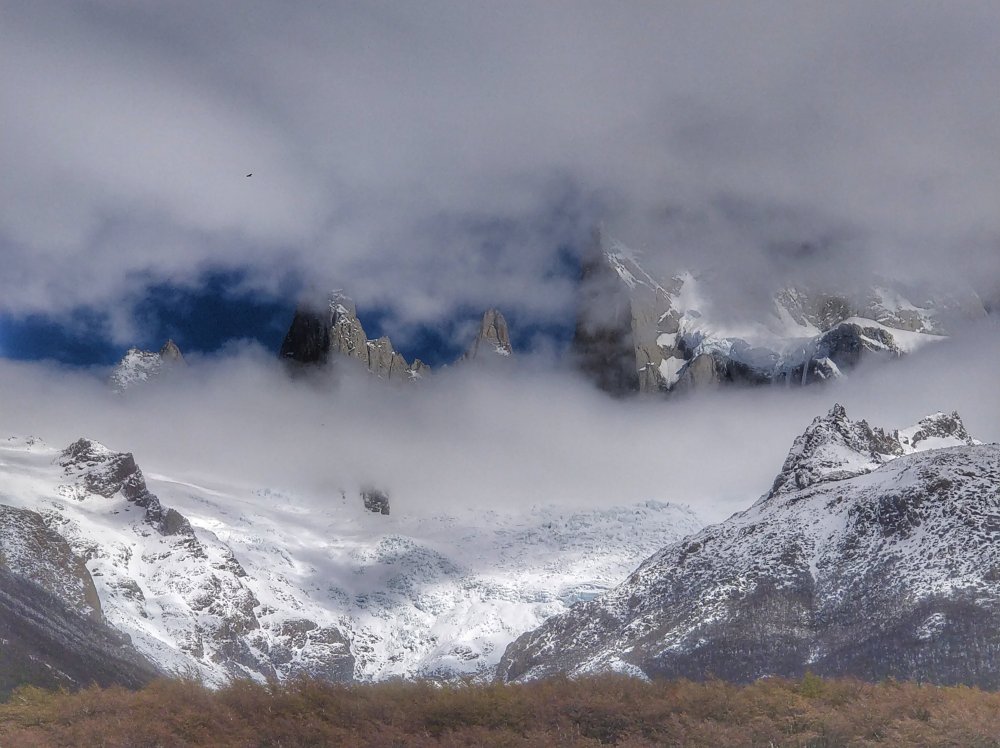 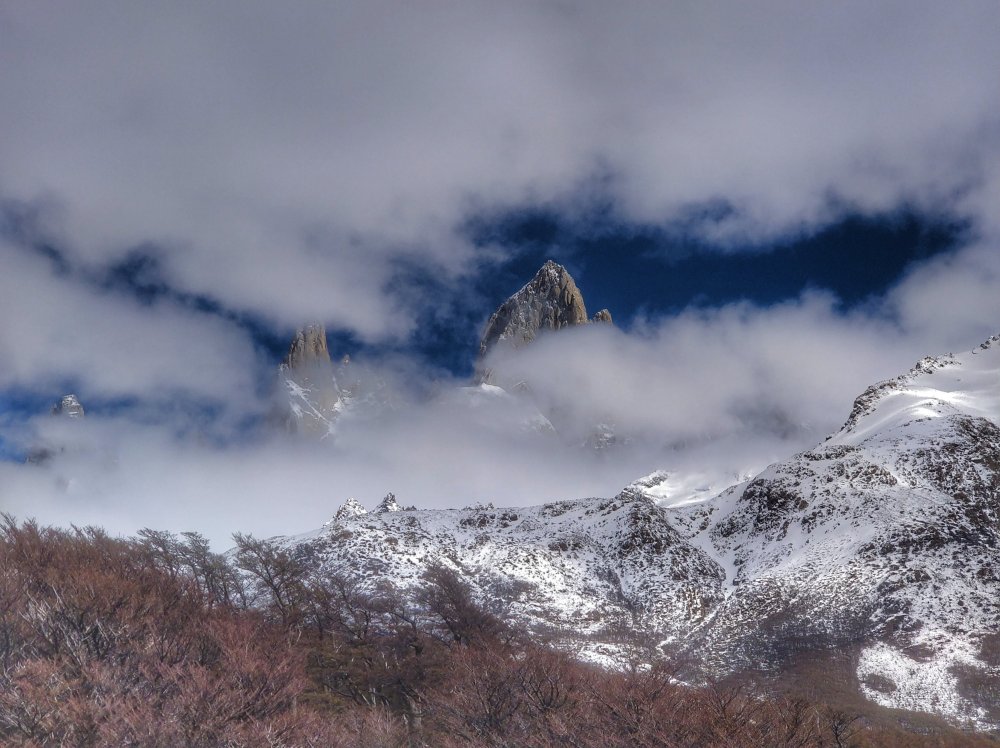 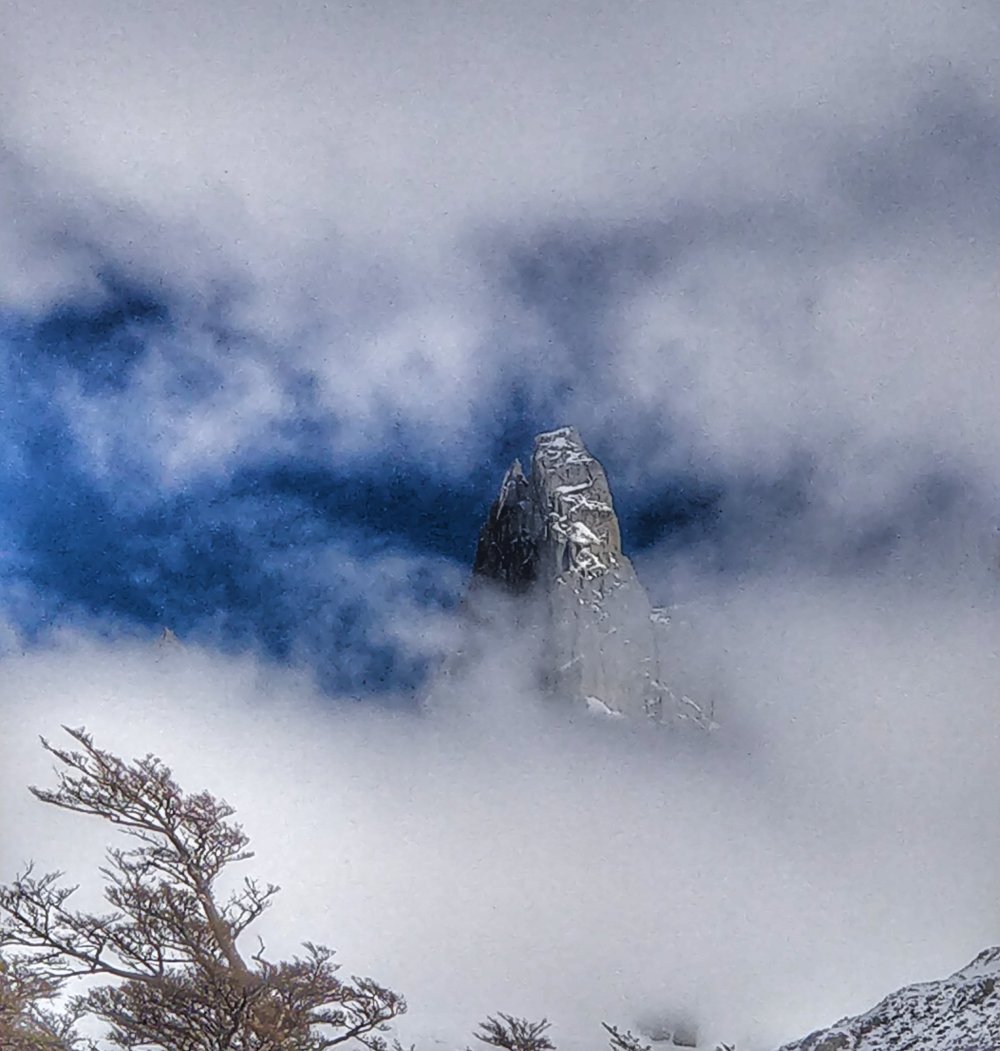 I was overwhelmed. It was one of the most beautiful things I had ever seen and I actually became quite emotional. It felt special, I felt privaleged….someone once again was looking down on us making it happen!

I actually just stood frozen to the spot in awe, mesmerised by the whole thing, no photos were taken I was just pure and utter still, in a trance. Then I realised cloud was forming again and she could be gone in a second so I grabbed my camera.

We stayed staring at her. Today I was provided with a sense of fulfillment and serenity. 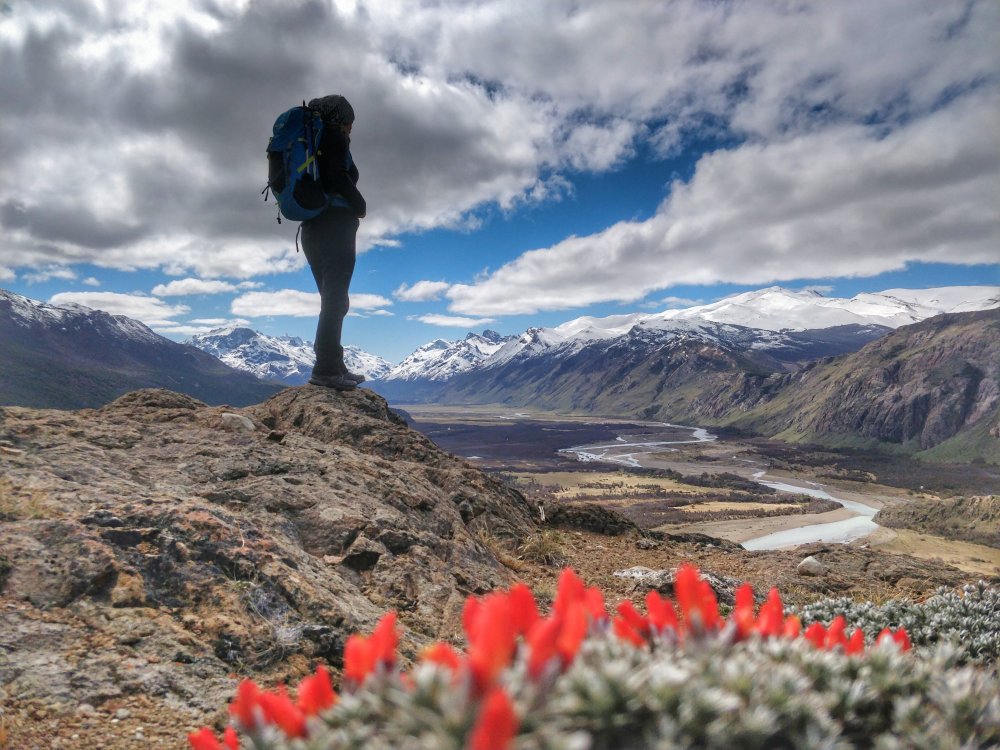 Patagonia is widely considered as having the most breathtaking, scenic landscapes in the world, I can see why, trekking here is every hikers dream….today I have been blown away! 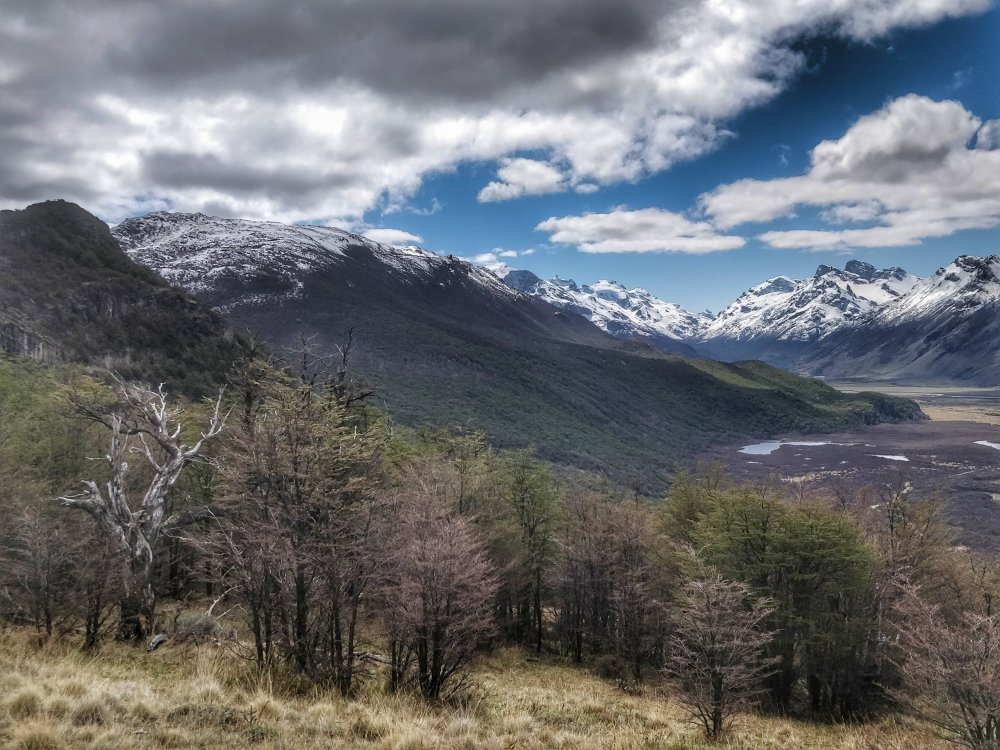 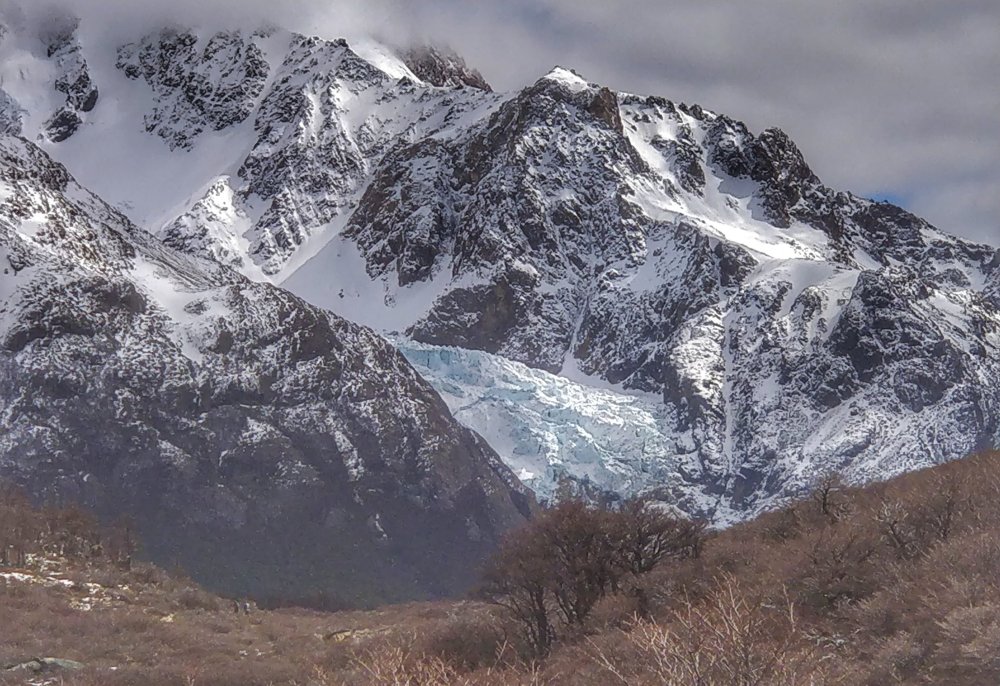 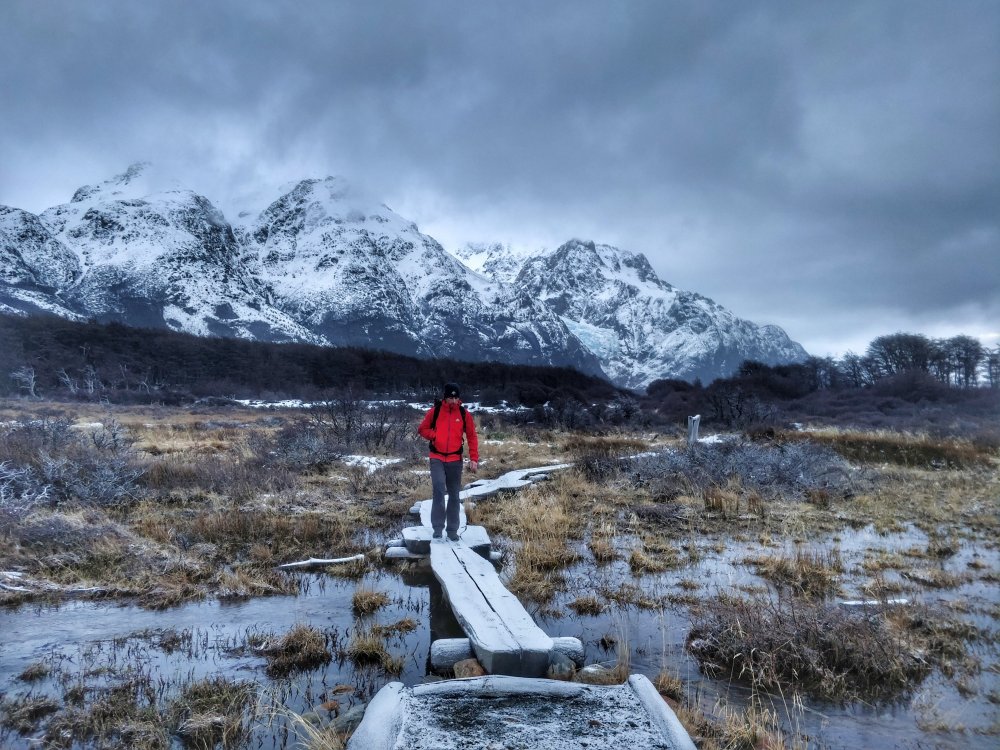 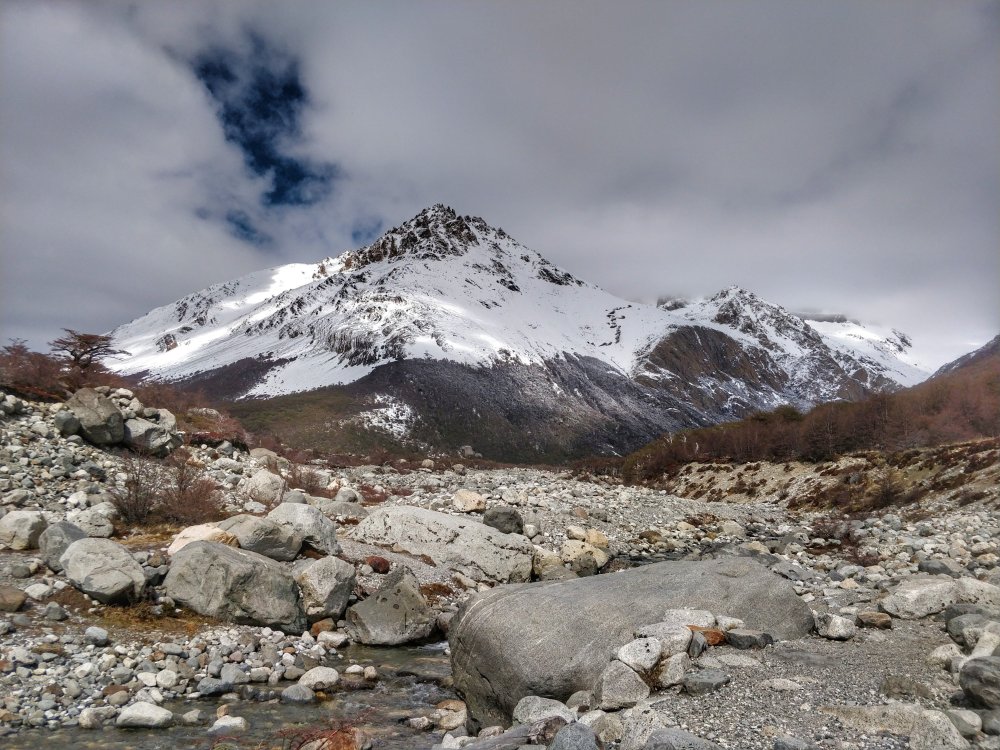 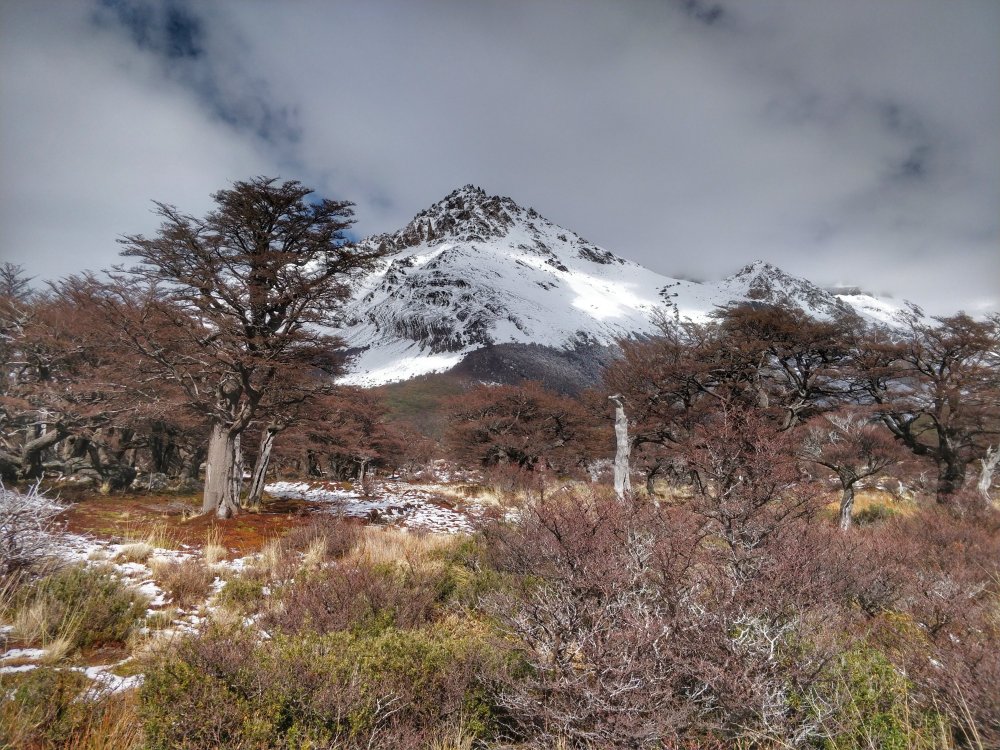 I didn’t want to head back into town too early and I didn’t want to leave this view, so we trekked around different parts of the Park to get different views and what better view than this to have breakfast/lunch/dinner all rolled into one….it couldn’t get any better! 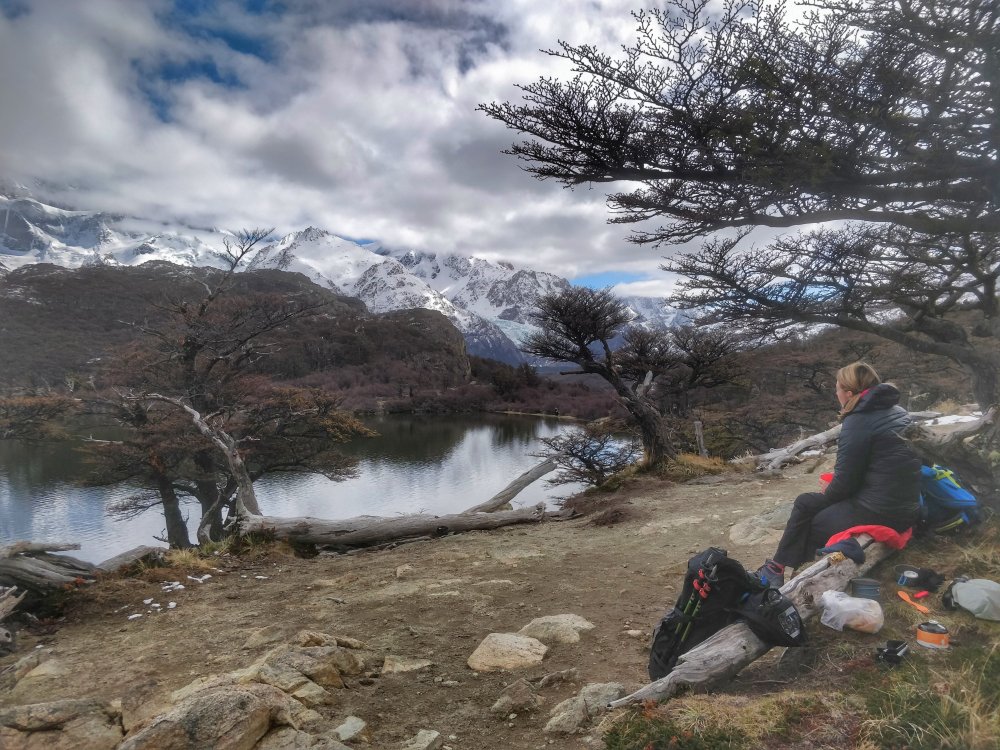 Eventually we headed down to Town, past open fields with many view points of Fitz Roy….my neck was twisted the whole way back, watching over my shoulder to make sure she was still there, then just like that clouds came in she was gone!

When we got back summer had arrived in El Chaltén. It was hot. The skies started to blue over and we knew once again that we were going to get our mountain view from town which I had really wanted to see. We had went to the Mountain now she was coming to us…and ow she did!

Today/tonight was glorious walking and sitting in town, it was hot, total blue skies could be seen all around and views were to die for, every place in this town has an amazing view.

The mountains were tall and bold like castles and rising to towering heights stood Mount Fitz Roy…I think I have just found my new favourite mountain!

Mother Nature spends most of her time here! Its rugged and beautiful and the landscape serves as an epic background to whatever activity you have in mind.

Tonight I reluctantly leave El Chaltén…it’s been one heck of a Town. We head to Puerto Natales on the 8am bus….Chile here we come!

I make no apologies now for the amount of photos below, but this is one beautiful mountain. 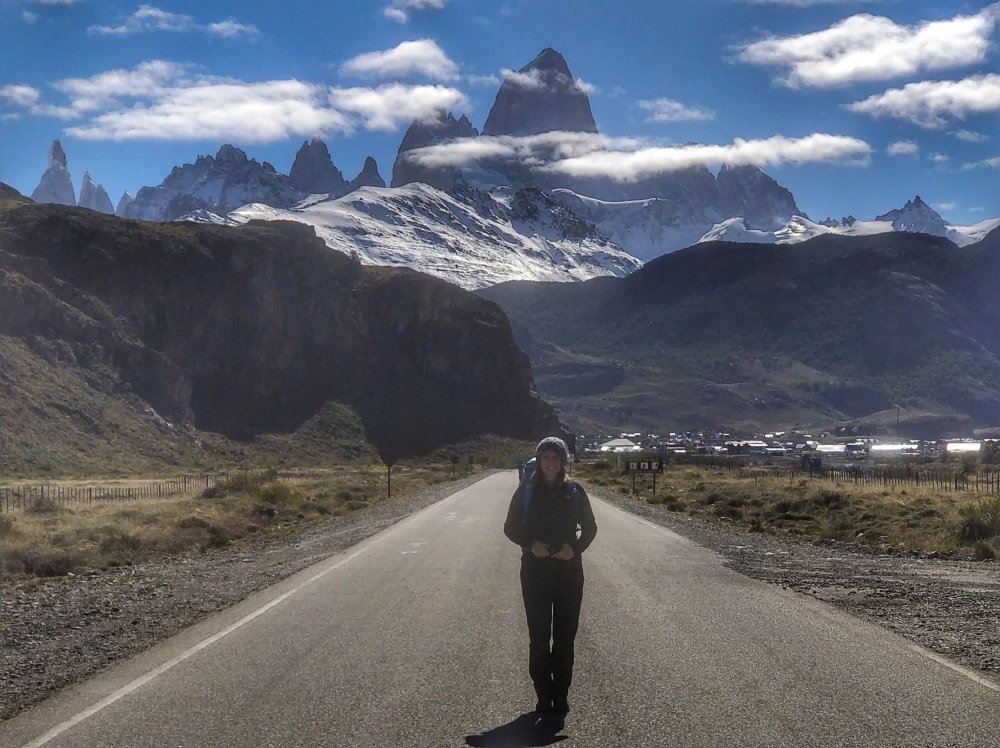 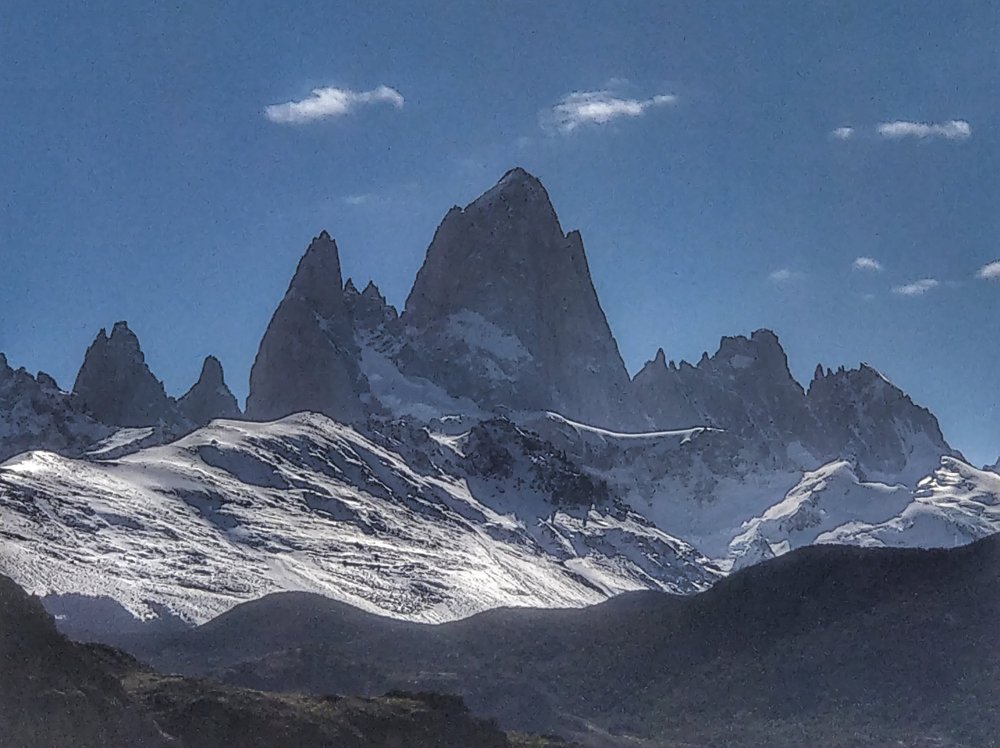 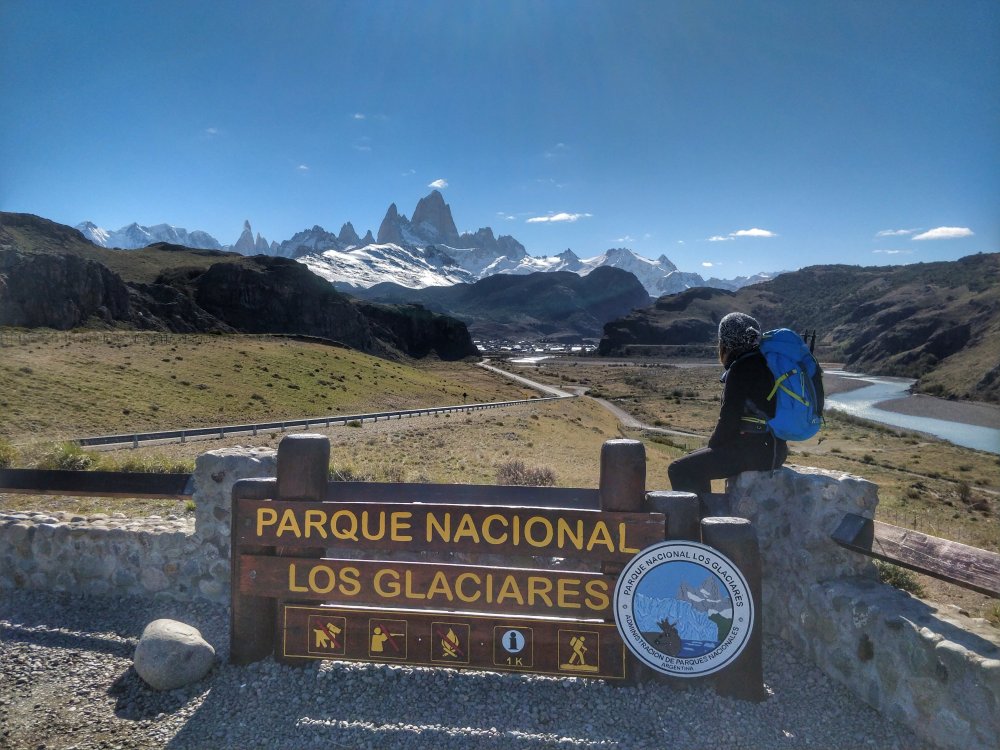 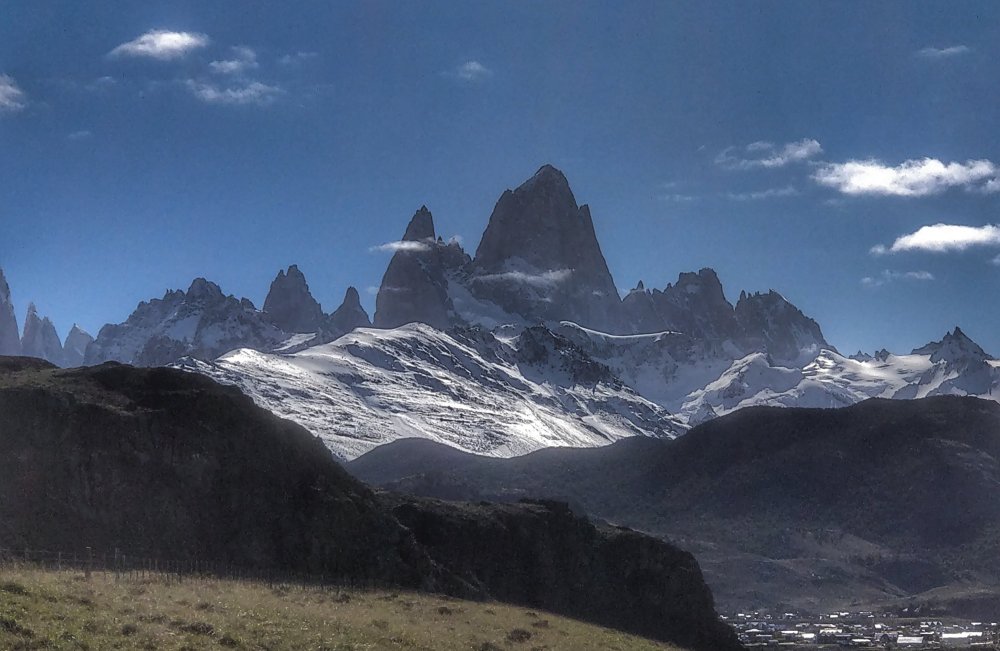 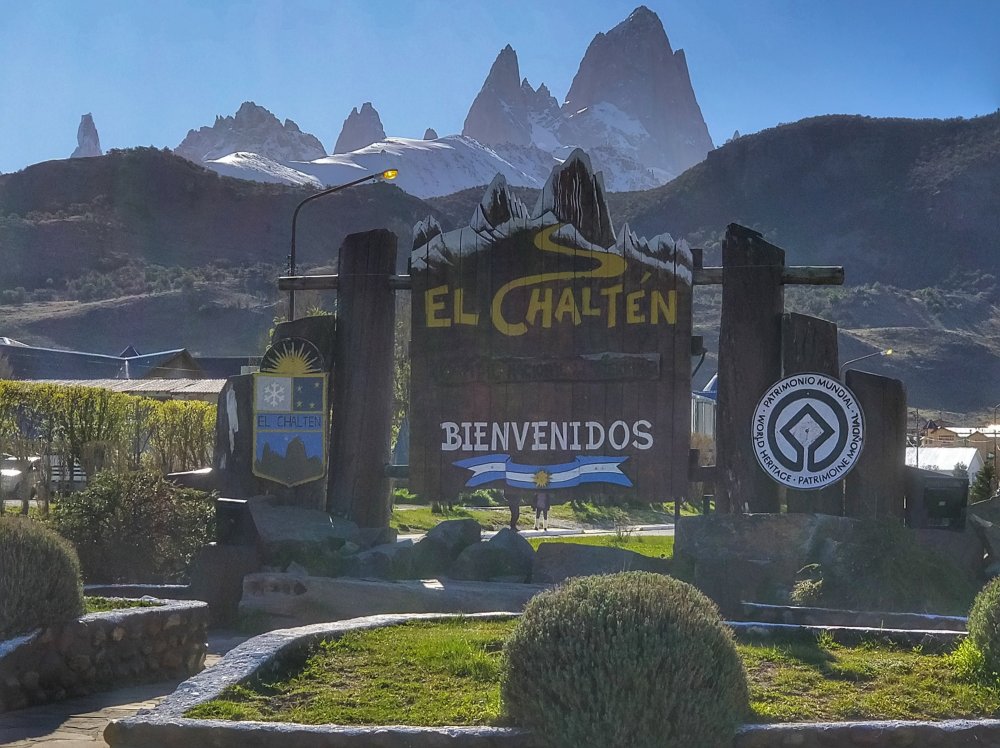 This is the silhouette view of the mountains we should have seen for days travelling about…we should have even seen these from La Leona….utterly stunning 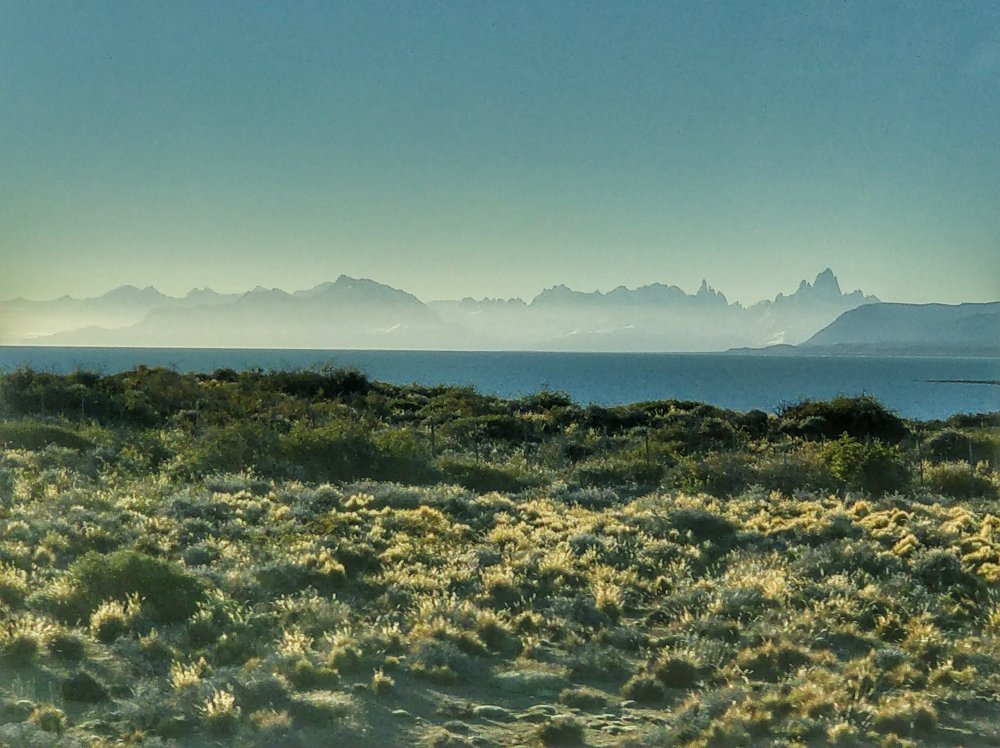