Today we were paying a visit to the Argentinian side of the Iguazú Falls.

All through the night it had been belting it down with rain and this morning wasn’t much better. But we weren’t going to let a little bit of a tropical thunderstorm stop us from seeing the falls!

Other than the thumping rain, it was actually warm..so at least we had warm rain…always look on the bright side!

The guys from our accomodation offered us ponchos which I took great pride in wearing, Andy did not!

Me just embarrassing Andy with my trendy poncho

On the walk to the bus station it was torrential. Once on the bus we were safe, or so we thought….but ow no…it was that bad it even rained on the bus…I kid you not…my poncho went back on!

Within 5 minutes of arriving at the park the rain was off and it turned into a dry humid day…perfect.

Iguazú Falls sits in the subtropical north of Argentina. It’s the largest waterfall system in the world and is one of the countries most impressive natural features.

This massive natural feature however means tourist trap…but it had to be done, that’s why we came after all.

On entering the park we were told to look out for these guys. 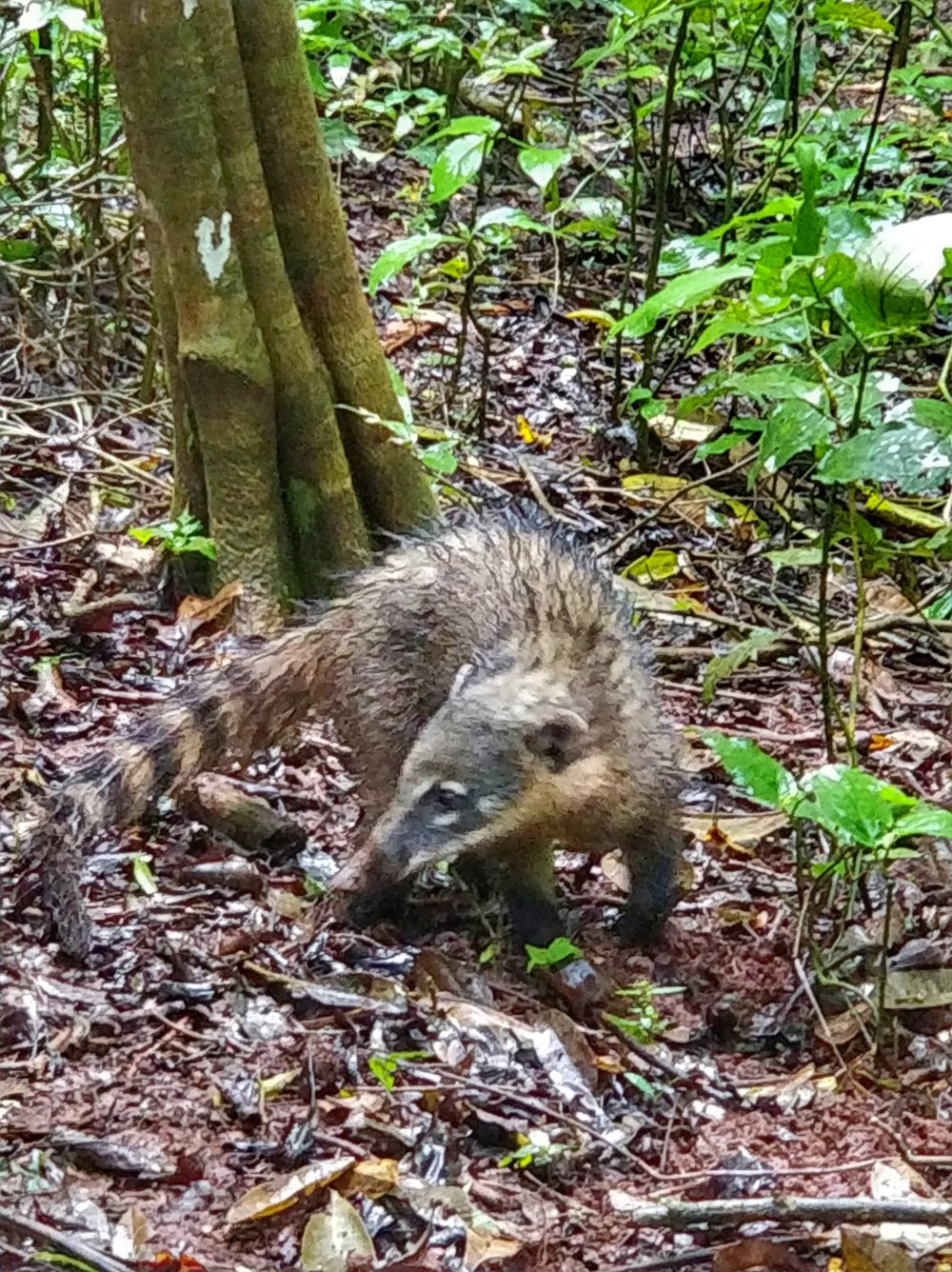 They’re called Coatis….every poster warned ‘they can bite’….and they were everywhere. We were told to watch if we were eating as they could get very aggressive.

And it could lead to this!!

We were also told to look out for jaguar’s and monkeys!

What we weren’t told about was killer ants and green spiders….eek! 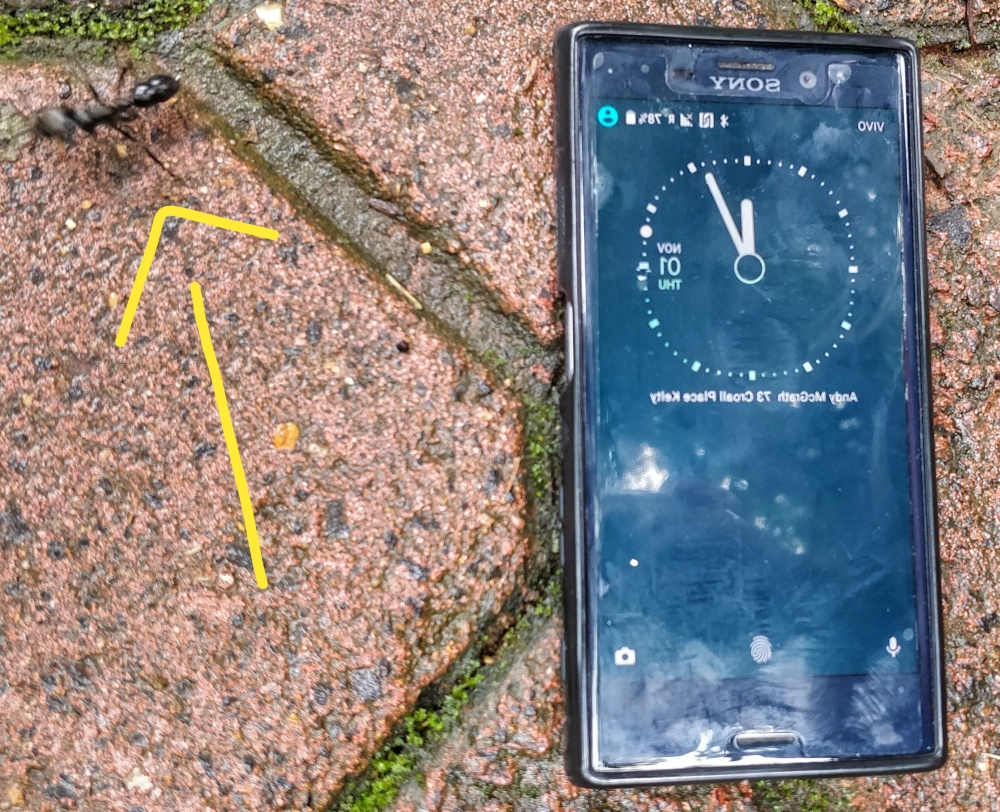 Is it a green spider?

We made our way over a network of footbridges snaking their way amongst the falls. 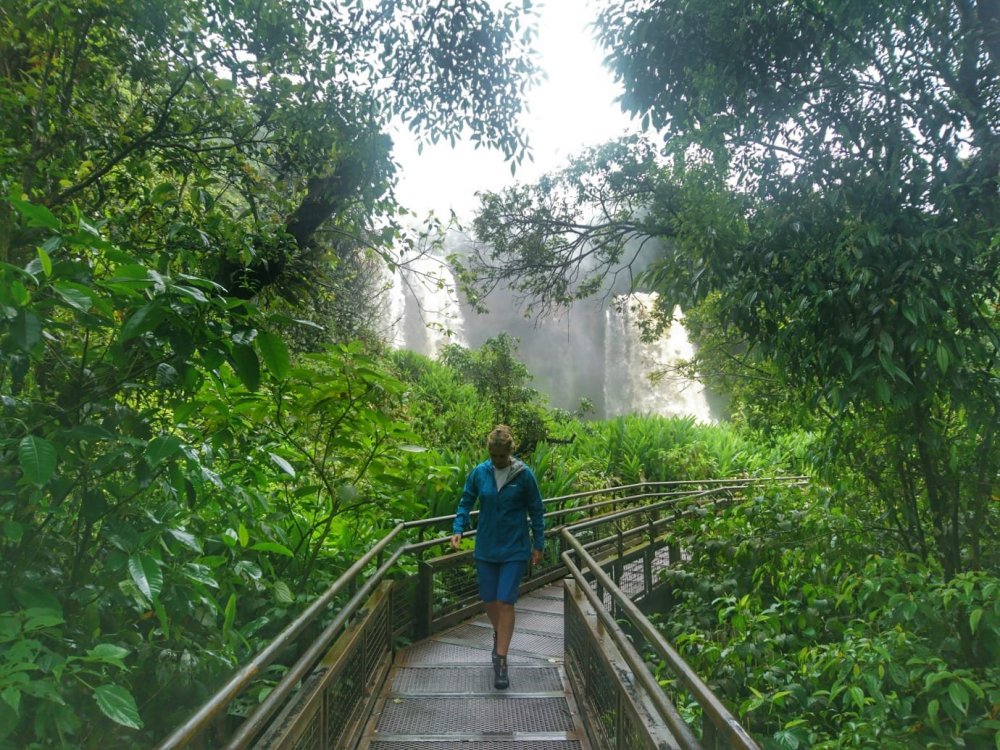 By this point I was soaked!

This incredible collection of 270 waterfalls stretch across 3 kilometres, creating an unforgettable spectacle tucked away in the luxuriant tropical rainforest split between Brazil and Argentina.

Our visit was a jaw dropping experience, and the power and the noise of the cascades will live in my memory forever an experience not to be forgotten.

This is looking on to the Brazilian side 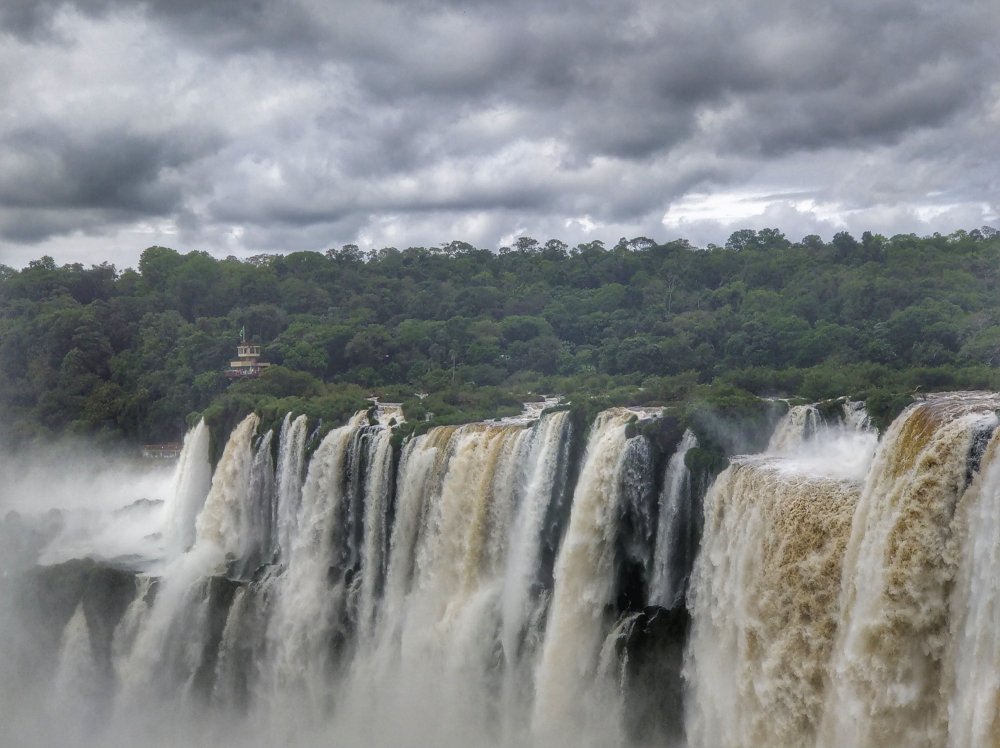 These iconic falls are simply fantastic and awe-inspiring, intimidating and deafening, hypnotizing and enrapturing.

Standing in its presence was drenching, dripping and dousing to those daring enough to get close….we got close and we got soaked!

Watching the water drop aggressively as it roared and rumbled on its journey across the rough rock path was breathtaking. 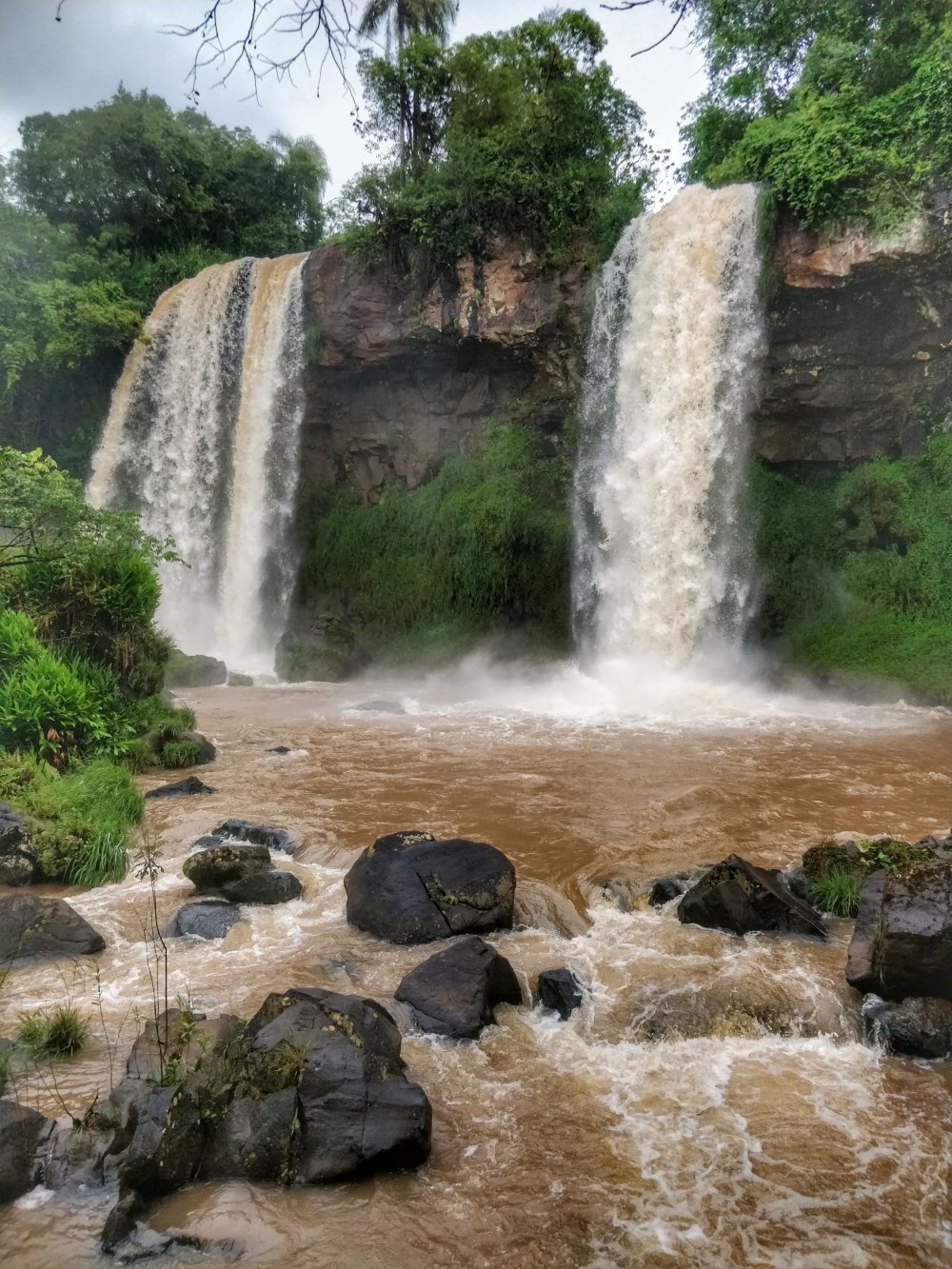 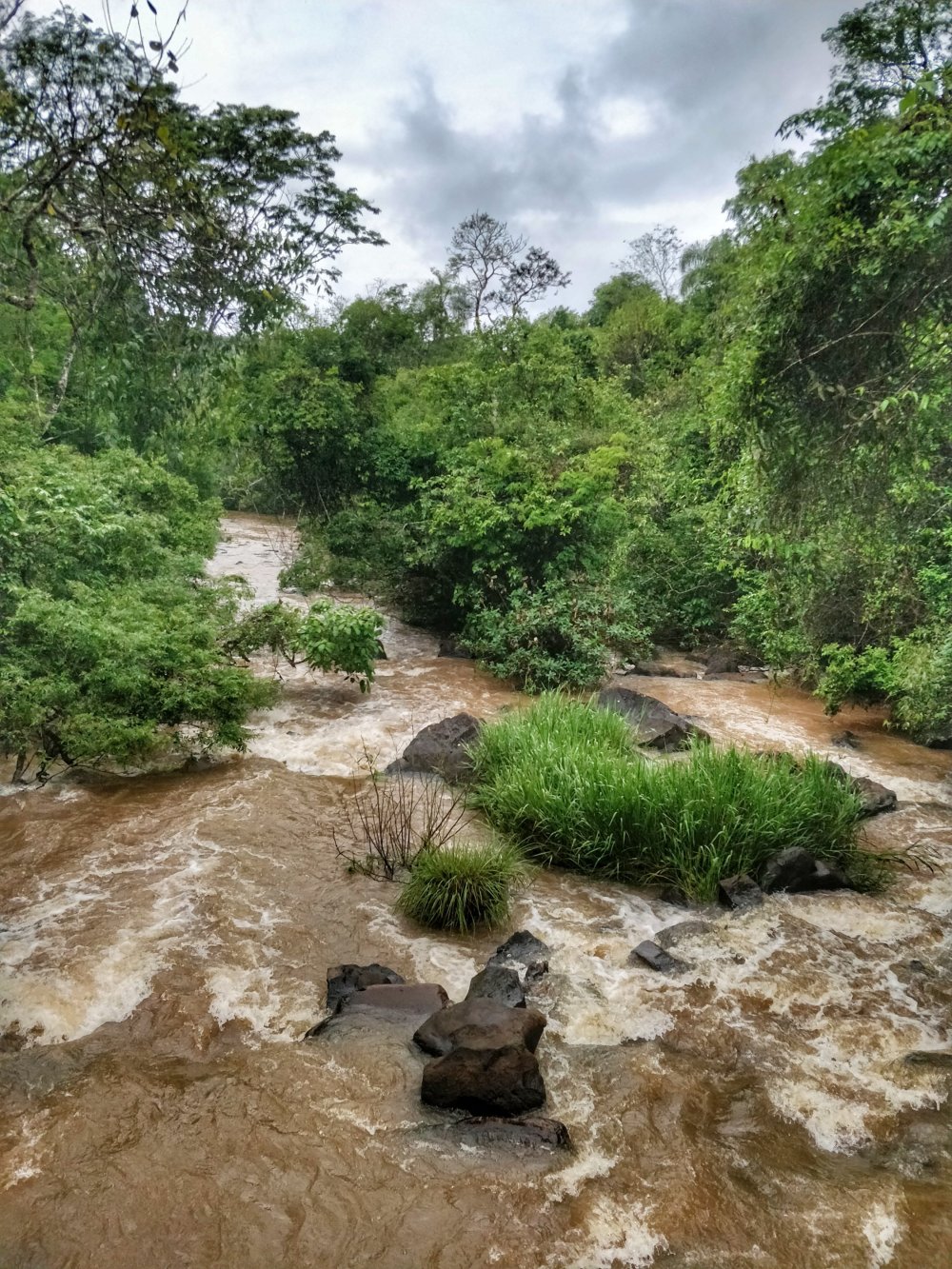 The giant spray from below reached back up towards the sky like it was touching it.

Never before have I seen a waterfall as magnificent as this scene and probably never will again. 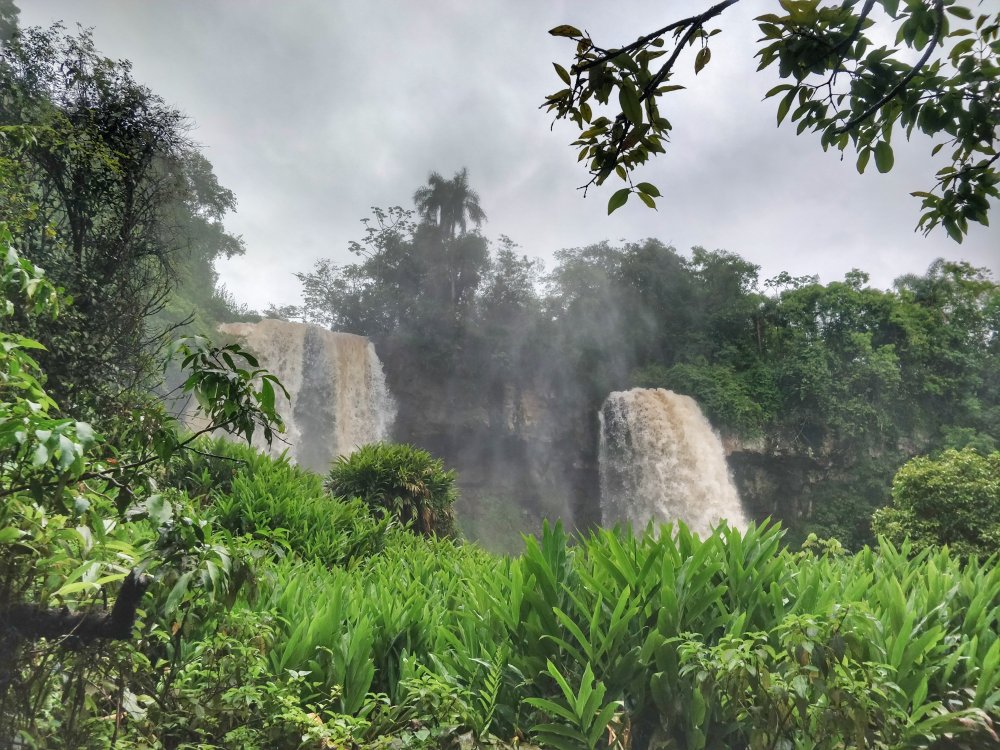 Majestic, wonderful, amazing, beautiful…..one of the most spectacular sights nature can offer, a once in a lifetime!

Four times the width of Niagara Falls they are huge. 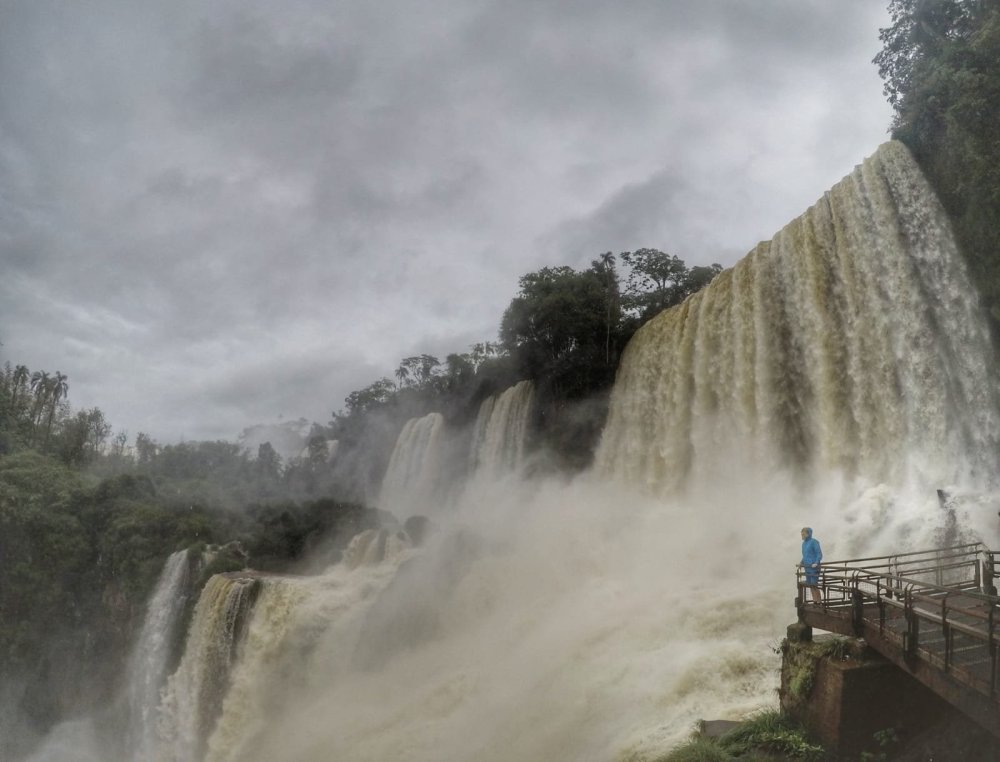 After we finished here we headed back to the town of Puerto Iguazú.

Puerto Iguazú felt different to the other towns we had been in. It definitely felt more Latin American to the other places.

Although there were signs of ‘fancy’ hotels, it appeared that there were less tourists about. The Falls are definitely the main attraction here and money has certainly been pumped into the park but less so in other areas…on walking the streets it felt safe but there was definite signs of poverty.

We checked out The Triple Frontier which is a tri-border area along the junction of Argentina, Paraguay and Brazil, where the Iguazú and Paraná rivers converge, it was pretty cool to be so close to three countries in the one spot!

Check out the birds nest hanging from this tree! 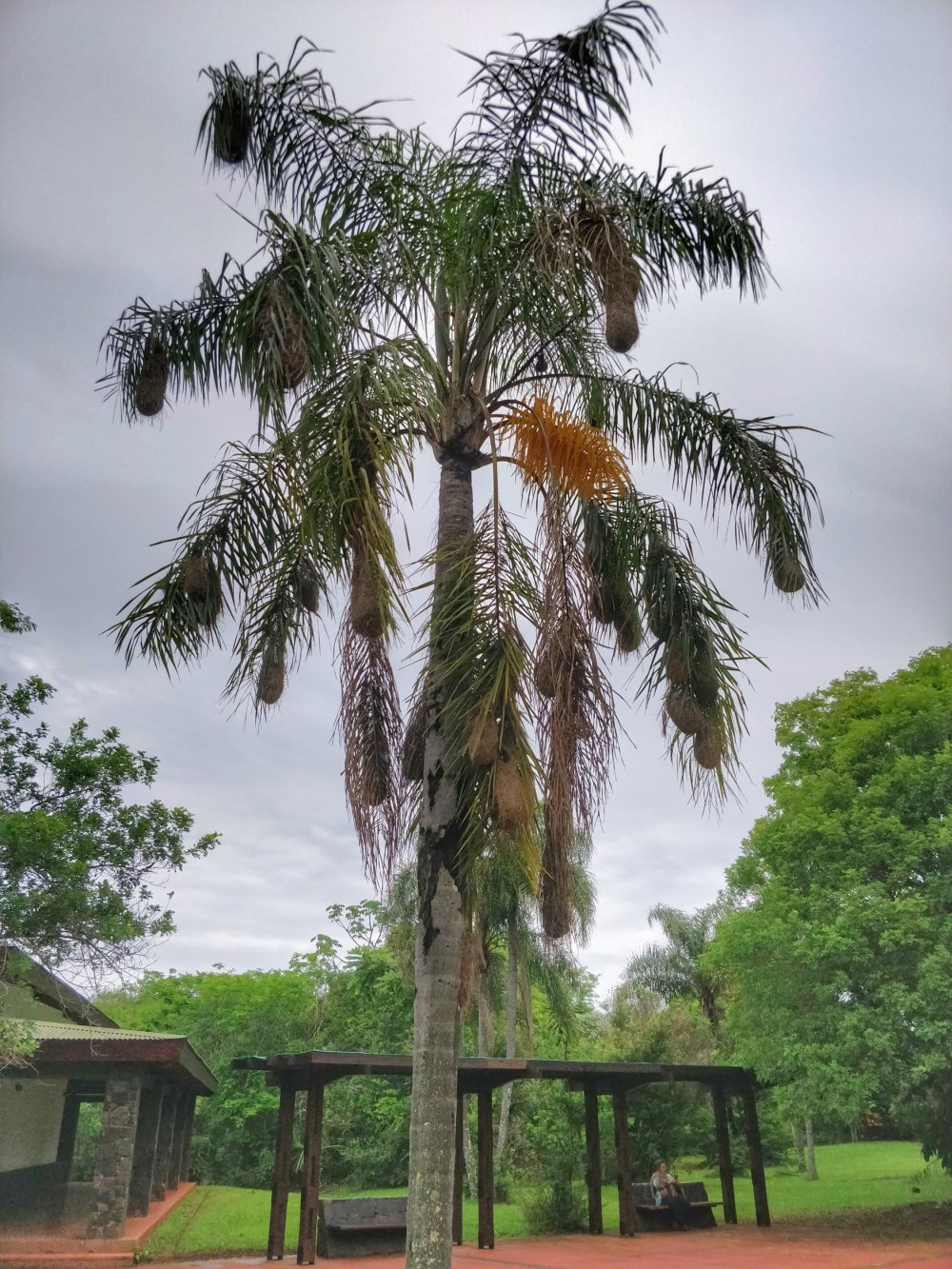